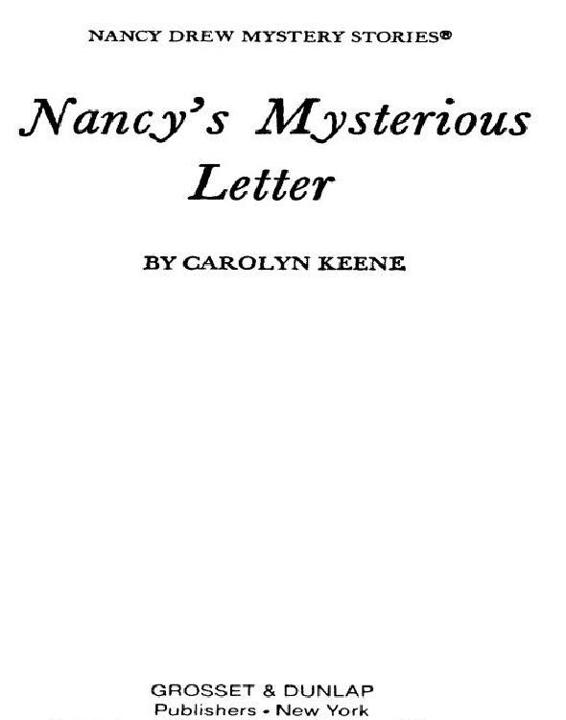 Table of Contents
Title Page
Copyright Page
CHAPTER I - Stolen Letters
CHAPTER II - Vanished Money
CHAPTER III - A Baffling Note
CHAPTER IV - Doubtful Inheritance
CHAPTER V - The Mysterious Gift
CHATTER. VI - A Good Lead
CHAPTER VII - The Wrecked Car
CHAPTER VIII - Disheartening Request
CHAPTER IX - “He’s Not a Suspect!”
CHAPTER X - Search for a Bride
CHAPTER XI - The Strange Messages
CHAPTER XII - A Fresh Puzzle
CHAPTER XIII - Locked In
CHAPTER XIV - Elusive Niece
CHAPTER XV - A Worse Mix-up
CHAPTER XVI - Mistaken Identity
CHAPTER XVII - Fake Summons
CHAPTER XVIII - Skakespearean Puzzle
CHAPTER XIX - A Trap
CHAPTER XX - Shattered Bells
NANCY’S MYSTERIOUS LETTER
BY mistake Nancy Drew receives a letter from England intended for an heiress, also named Nancy Drew. When Nancy undertakes a search for the missing young woman, it becomes obvious that a ruthless, dangerous man is determined to prevent her from finding the heiress or himself. Clues that Nancy unearths lead her to believe that the villainous Edgar Nixon plans to marry the heiress and then steal her inheritance.
During her investigation Nancy discovers that Nixon is engaged in a racket that involves many innocent, trusting persons. The thrilling hunt for Nixon and the heiress takes Nancy in and out of many perilous situations.
How the teen-age detective saves the British heiress from the sly, cunning schemer makes a highly intriguing story of mystery and suspense.

Ned pulled Nancy down to the pavement

CHAPTER I
Stolen Letters
“OH, poor Ira!” Nancy Drew exclaimed and slowed her convertible.
The two girls with her turned to look toward the sidewalk. Trudging along was an elderly mail carrier. He was lugging a heavy bag over one shoulder. His head was down and his eyes were almost closed against the strong November wind that swirled leaves and dirt around him.
“Mr. Nixon!” Nancy called out of her open window. “Let me give you a ride.”
The mail carrier looked up and managed a smile. “Hello, Nancy,” he said. “Thank you, but I have to stop at every house. Lots of letters today. There’s one in the bottom of my bag for you. It was sent air mail from London, England.”
“How exciting!” Nancy said. “Well, I’ll see you at the house.” She added, “I’ll have some hot cocoa waiting for you.”
Mr. Nixon smiled and Nancy drove on.
“I don’t know anyone in London,” she said to her friends. “Who could be writing to me?”
The attractive, titian-blond, blue-eyed girl at once became lost in thought.
“Another mystery probably,” remarked her dark-haired companion, George Fayne. George was an attractive, slender girl, who kept her hair short and always wore tailored clothes.
Her cousin, seated next to her, was blond and slightly overweight. When Bess Marvin grinned, her deep dimples showed prominently. “Maybe you have an unknown admirer in England, Nancy,” she said.
George gave Bess a dark look. “Do you always have to think of the romantic side of things?”
Bess tossed her head. “What’s more fun?” she retorted.
The three girls were returning from an overnight visit to Red Gate Farm, where at one time Nancy, with the help of her two friends, had captured a counterfeiting gang. The solving of that mystery had been followed by Nancy’s tracking down
The Clue in the Diary.
The trunk of Nancy’s convertible was filled with fruits and vegetables from the farm. When she reached the rear of her home, the Drews’ housekeeper, Mrs. Hannah Gruen, opened the door and rushed down the steps.
“Nancy, you’re home!” she cried out, and gave the girl a hug. “Hello, Bess. Hello, George.”
As Nancy unlocked the trunk of her car, she said, “We met Ira Nixon down the street. He’s bringing another mystery!” She told the housekeeper about the letter from England. “Poor Ira is half-frozen. I promised him some hot cocoa When he gets here.”
“I’ll go right in and make it,” said Mrs. Gruen. “You girls unload the car. My, what a lot of stuff and it smells wonderful!”
Nancy and her friends had just finished putting the farm products into the Drews’ cold cellar when the front doorbell rang. Nancy hastened to answer it.
Mr. Nixon stood there. As he set his mailbag down in the vestibule, Nancy thought, “He looks so exhausted, I hope he can finish out the year until his January retirement.”
She led the way into the living room. Nancy, although eager to see her mail, resisted the temptation to ask for it. She would wait until he was ready to give it to her.
A few moments later Bess came In carrying a tray with four cups of cocoa. Behind her was George with a big plate of homemade cookies. Hannah Gruen, who had lived with Nancy and her father since the death of the girl’s mother when she was three years old, was an excellent cook. She enjoyed baking and often surprised the family with delicious cakes and pies.
Ira Nixon sipped his cocoa slowly. He nibbled on a cookie and slowly color came into his thin face. Hannah Gruen walked in with a pot of cocoa and refilled everyone’s cup. As the mail carrier finished the second cup of cocoa, he said he must be on his way.
“I almost forgot to give you your letter,” Mr. Nixon said as he stood up, and went directly to the vestibule.
A moment later the girls heard him cry out and rushed to his side.
“What’s the matter?” Nancy asked.
“The letters! They’re gone!”
“What do you mean?” George asked, peering into the bag. There was nothing in it but magazines.
“All the letters still to be delivered have been stolen!” Ira Nixon exclaimed.
He began to sway and the girls quickly grabbed hold of him. They led him back to the living-room sofa.
“Oh dear! Oh dear!” he moaned. “Only six weeks more to my retirement and now this disgrace!”
Bess tried to soothe him. “But it wasn’t your fault.”
“It’s a rule that a mail carrier must keep his bag with him at all times,” the man said.

“All the letters have been stolen!” the mailman
exclaimed
Suddenly George turned to Nancy. “Your letter from England! Now you’ll never know who sent it.”
“And that’s not the worst of it,” Ira Nixon spoke up. “I also had a registered letter for Mr. Drew. There may have been an important document in it.”
The girls and Hannah Gruen looked at one another. Almost instantly, Nancy sprang into action.
“The thief can’t be far away,” she said. “We must try to catch him!”
The three girls put on their coats and dashed out the front door. The Drew home stood well back from the street and was reached by a curving driveway.
“You girls go left,” Nancy suggested. “I’ll go to the right.”
They ran to the street and looked in all directions. Bess and George, seeing no one, hurried to the corner. Then George went left and Bess right.
In the meantime Nancy had spotted little Tommy Johnson, who was riding his tricycle on the sidewalk. She hurried to talk to him.
“Hi, Nancy!” he called out. “I just made a new record. Want to see how fast I can go?”
“Some other time, Tommy,” she answered. “Tell me, have you been riding past our house?”
“Sure thing.”
“Did you see anybody come from there in the past few minutes?” Nancy asked the five-year-old.
“Yep. A man.”
“What did he look like?”
Tommy thought for a moment. “Well, he—he was real thin and he was taller than you and he was in an awful hurry.”
“What was he wearing?” Nancy prodded.
Tommy giggled. “A yellow coat and hat.”
Nancy was puzzled. “You mean a yellow raincoat and rain hat?”
“Nope. It was a winter coat and hat like my daddy wears.”
“And it was yellow?” Nancy asked.
Tommy nodded. Then he grinned. “Nancy, While I was racin’ I was playin’ ’tective like you. I can tell you something else.”
Nancy stooped down so that she was on eye level with Tommy. “Tell me everything,” she pleaded.

Thoreau's Legacy by Richard Hayes
Forever Mine by Marvelle, Delilah
The Big Book of Pain: Torture & Punishment Through History by Daniel Diehl
Divine Healing Made Simple: Simplifying the supernatural to make healing & miracles a part of your everyday life (The Kingdom of God Made Simple Book 1) by Praying Medic
Love Under Two Benedicts by Cara Covington
G. by John Berger
Slow Dollar by Margaret Maron
One More Kiss by Katherine Garbera
The Proviso by Moriah Jovan
Return of the Cartier Cartel by Nisa Santiago