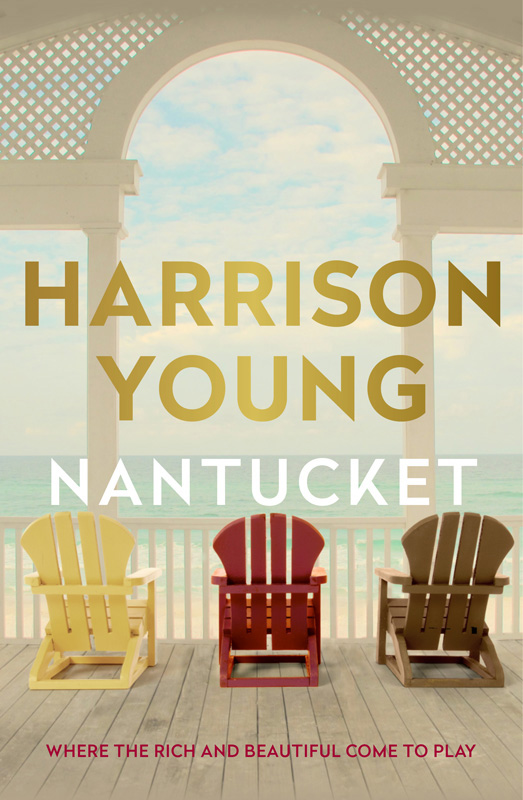 All rights reserved. No part of this book may be reproduced or transmitted in any form or by any means, electronic or mechanical, including photocopying, recording or by any other information storage retrieval system, without prior permission in writing from the publisher.

Title: Nantucket: where the rich and beautiful come to play/Harrison Young

Harrison Young has been writing fiction in airports and on weekends since 1981. Graduating from Harvard University in 1966, Young has been a journalist for
The Washington Post
, a captain in the U.S. Army Special Forces, a government advisor and an investment banker. He has done business in twenty countries and has advised a dozen governments on financial system issues. Young helped establish banks in Bahrain and Beijing and as a senior official at the FDIC in Washington he managed the resolution of 266 failing banks. A dual citizen, Young retired as chairman of Morgan Stanley Australia in 2007 and became a director of Commonwealth Bank of Australia. 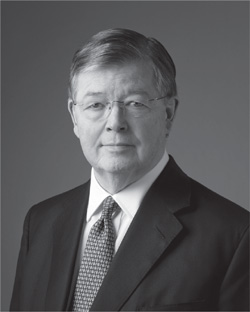 If the weekend was music, it was a dazzling improvisation: invisible musicians, a theme stated and explored, the violins of reason chasing the cello of desire, sound swelling to fill the house. Andrew wasn't listening when he landed in Nantucket, though. That came later. Understanding came later.

Andrew was quite pleased with himself, in fact, as he got off the plane, accompanied by his two billionaires and their seriously beautiful wives. One of the men owned something the other one wanted â provided the terms were “reasonable” â and had indicated his willingness to talk. Andrew had persuaded them to be his guests for the weekend â his and Cathy's, that is. This was how he made his living.

Andrew had brought the usual financial projections and a handful of power point slides, but he doubted he'd need them. Joe and Shiva could do earnings-per-share dilution calculations in their heads â as could Andrew, of course â but more to the point, the deal in prospect didn't hinge on numbers but on trust. Although Joe's company was the “natural owner” of the intellectual property one of Shiva's companies had developed, and consequently could offer a “competitive” price for it, Shiva
would receive more value if the deal was “tax efficient,” and the structure most likely to achieve that involved their being partners for a few years. In Andrew's experience, very rich people were reluctant to trust anyone, let alone accept them as partners. Hence the house party.

A house party is a form of theatre: a gathering of friends and strangers resolved to entertain each other, a little version of the world. What happened on this occasion was comic â a sequence of improbable events with a happy ending. But the players themselves didn't know that. When they put on their costumes, everything was at risk.

Comedy is a form of wisdom. It permits outrageousness. We understand ourselves by mocking the blindness of others. We come to terms with life's arbitrary cruelty by laughing at the neatness of the plot. Wisdom can be painful but it doesn't have to be â which is nice to know.

Some house parties are primarily a means of showing off. See my gorgeous sailboat. Guess how much my decorator cost. Investment bankers make a lot of money, but foot soldiers like Andrew cannot win that competition. More importantly, if they're smart, they never forget the famous question, “Where are your customers' yachts, Mr Morgan?” and are modest about whatever wealth they possess.

The world Andrew and Cathy created each summer weekend in Nantucket was designed to make everyone an equal. The corporate chieftains and status-conscious wives they invited were treated like family â expected to help set the table and wash dishes. Some were a bit shocked by this, even at first insulted â they were used to staff and servants â but mostly and in time they found it amusing, even relaxing. They were made to go on walks that wore them out, helped them
unwind, and with luck made them friends.

The objective this weekend was more challenging than usual: causing a driven American engineer and an elegant Indian prince to bond. “You're kidding,” Cathy had responded when Andrew introduced the idea. “How are you planning to manage that?”

“We don't need to fall in love,” Joe had told Andrew, “but I've got to check him out. I won't say I can read Indians, but I want to at least be sure no alarms go off.” And later, after the weekend had been arranged: “You know, Andrew, the thing about Indians is that some of them are saints and some are bandits â I'm talking about the top businessmen, now â and I find it very difficult to tell them apart. They all went to Oxford. They all have wonderful manners and excellent taste. They all have personal charities they support. Some of them fast one day a week, if you can believe it. But you've been to Mumbai, you've seen the poverty, you've read how widows get burned alive, or at least used to. Your brain is telling you the guy you're doing business with is probably in line for the Nobel Peace Prize, but your gut is telling you he'd sell you his wife if that would grease the deal.”

“Have you met Rosemary?” Andrew had asked him over the phone. If Rosemary was for sale, she'd be expensive.

“That's Mrs Shiva? No, I've barely shaken hands with
him
, as you know. What's she like? Not Indian, I assume.”

“Venus as head prefect.” The notion of buying Shiva's wife had lighted a fire in Andrew's brain he was finding hard to put out. He didn't want to put it out, actually.

“Yes, and her father's an earl,” said Andrew, pretending not to hear the joke. “But that doesn't do her justice.
Lady
Rosemary is the sort of woman wars were fought over, back when that sort of thing happened. Pale skin. White-blonde hair. Long neck. Perfect figureâ¦”

Andrew didn't answer. Perhaps Shiva would give him Rosemary as a “deal toy” â one of those souvenirs that were passed out at closing dinners for major transactions. Andrew had four Montblanc pens, three scale models of Boeing airplanes, and five unopened bottles of Dom PÃ©rignon in his office. A woman would be much more useful. Stop it, he told himself. He was getting over-excited.

Then again, excitement was crucial to getting deals done. You became more creative. You needed less sleep. “Holy madness,” Andrew sometimes called it. Not that there was anything holy about the merger business.

“Personally,” Joe was saying, “I've never seen the point of English girls. All that Wellies and Barbour crap, standing out in the rain, growling at the dogs and getting excited about a mug of hot cider.”

“I take it you've been to a shooting party.”

“Once. I've been to everything once. You get high enough on the
Forbes
âRich List' and everyone but the Pope wants to entertain you.” Joe had paused. “No offence, Andrew. This weekend with you and Cathy has a purpose. And I'm kind of curious to see where Moby Dick came from. Or to be accurate, where Ahab came from and Ishmael found a ship. The whale came from the Great Southern Ocean.

“Anyway, it was grouse we were supposed to be shooting, only I couldn't hit any. The whole weekend seemed to be a
continuous in-joke. There was a girl I was expected to go after. This was before Cynthia, you understand.”

“But after Martha,” said Andrew.

Joe had an “efficient” approach to marriage, as he put it. Andrew had summarised the matter for Cathy. “He knows what he wants, or he says he does. He insists on a pre-nup. If the woman delivers, great. If it doesn't work out, she walks away with $100 million.”

“Hard to resist,” Cathy had said.

Maybe he could sell Cathy to Joe. If Joe was interested in bondage, Cathy would be ideal. Their marriage was a form of bondage. But so are many people's marriages. Or so Andrew told himself.

“After dinner I went upstairs and crashed,” Joe continued, “which wasn't hard after standing around in the cold all day. When I came down to breakfast, the hostess was mad at me. I was supposed to have realised the girl had the best guest room for a reason.”

Andrew had been to that sort of English weekend once himself. The memory of it was a pillar of his Anglophilia â and a well-spring of guilt. He'd been at the investment banking firm where he'd made his career for a little more than a year. He was twenty-two. The firm had sent him to the London office to crunch numbers on a deal. It was supposed to be for a week but it turned into a month. “It's a good sign,” he'd told Cathy, who was stuck in Brooklyn with their six-month-old daughter. The guys in the London office wanted to give him a good time, so they arranged to have the client entertain him. Or maybe he was being hazed. He was pretty green. “Be amusing,” he was told. “Your host is important.”

Long train ride to the north. No idea where he was. A cold wind that chilled him as he waited to be picked up. His hostess arrived fifteen minutes late, apologised profusely, drove way too fast for the narrow roads, apologised further that the roster of guests kept changing, with the result that she now needed to ask him, would he mind sharing a bathroom with another guest? Of course he wouldn't. “You'll have your own bedroom, of course,” his hostess had said.

The bathroom was between, and only accessible from, the two bedrooms. There were no locks. He was warming up by taking a strongly recommended pre-dinner bath in the enormous tub when his neighbour came in. “I'm told there's a hot water shortage,” she'd said, hanging her dressing gown on a hook on the door and climbing in so she faced him. “I hope you don't mind my joining you.”

“Delighted,” Andrew had said, trying to be casual about it.

“Oh, aren't you nice,” she said, as if his erection was a form of good manners. “I'm Venetia, by the way.” She held out her hand.

“And you're an American, I take it. Have you been to one of these things before? Here, let me wash your back.”

“Never,” he said, turning around.

Sydney Harbour Hospital: Lexi's Secret by Melanie Milburne
Master of the Mountain: Thomas Jefferson and His Slaves by Henry Wiencek
Bad Bridesmaid by Siri Agrell
The Last Annual Slugfest by Susan Dunlap
Forgotten Sea by Virginia Kantra
In the Devil's Snare by Mary Beth Norton
A Proper Charlie by Wise, Louise
Halfway to Half Way by Suzann Ledbetter
A Few Seconds of Radiant Filmstrip by Kevin Brockmeier
Minimalist Living: Decluttering for Joy, Health, and Creativity by Hill, Genevieve Parker