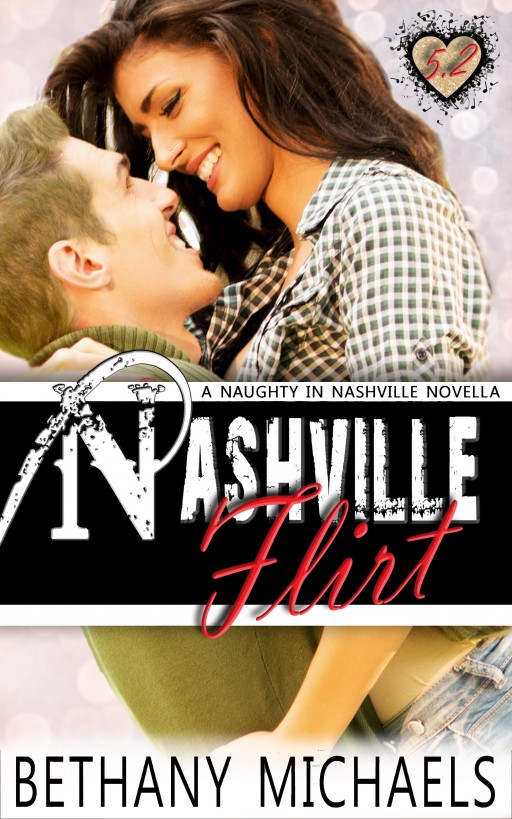 A Naughty in Nashville
Novella

No part of this book may be reproduced in any
form or by any electronic or mechanical means including information
storage and retrieval systems, without permission in writing from
the author. The only exception is by a reviewer, who may quote
short excerpts in a review.

Books in the Naughty in Nashville Series:

For new release alerts, sign up for the
Bethany Michaels newsletter HERE

“
It's not stalking if it’s
meant to be,” Emily Kingston said. “All I have to do is convince
Bo.” She stared at the Opry stage, looking as if she was willing
him to appear before her and fulfil all her fantasies.

Sarah tried not to roll her eyes. Her
younger sister, Emily, was always over the moon about something.
And while Sarah admired her sister’s spontaneous, passionate and
sometimes erratic personality, she had chalked up Emily’s obsession
with country music star Bo Branson as just another passing
craze.

When Emily had won the radio station
contest with a prize package consisting of a concert, dinner with
Bo and a personal tour of Nashville with him, Sarah had been afraid
Emily had crossed the line between fan and stalker. Sarah had only
agreed to be Emily’s guest on the weekend trip to Nashville to keep
Emily out of trouble. Sarah didn’t even like country music—loathed
it, in fact—and had never heard Bo Branson’s name before Emily
called her with the news about the trip.

“
That's not how it works,”
Sarah said. “You should choose a mate based on mutual interests and
mutual goals. Similarity of personality. By determining if the guy
would make a good father and family man. I don’t know much about Bo
Branson personally, but the life of a country music star on tour
doesn’t really fit my idea of stable.”

“
What is this, 1950?”
Emily asked. “What about sex appeal? Sexual compatibility?
Chemistry?”

“
I suppose that's
important,” Sarah conceded. “But it's not the only thing you should
look for. It's not even the first thing.”

“
Will you stop already?
I'm not here looking for a husband. I'm looking for a fling. A red
hot, melt your panties off, weekend fling. With Bo
Branson.”

The crowd, packed into the Ryman’s
legendary church pews, started to clap and cheer as the band took
the stage. “Bo Branson may not be boyfriend or husband material,
but he is definitely fling material,” Emily insisted, and Sarah
knew there was no way something as silly as logic was going to
debunk the fantasy guy Emily had created in her head.

The real Bo Branson was probably a
jerk with the sexual morals of an alley cat. He was probably
conceited and self-centered. He was probably a cheater and a liar.
The kind who would throw away six years of a committed relationship
with a good woman to have a fling with the department
secretary.

Ok, to be fair, that was Sarah’s ex,
Charles. Maybe it wasn’t fair to put all of Charles’ sins on Bo’s
head, but damn. It had only been a couple of months since the
break-up and if Sarah was honest, it still stung. She wasn’t under
the illusion that she was suffering from a broken heart, but the
feeling of rejection, of not being good enough, pretty enough, or
interesting enough in bed or out of it—that was messing with her
head. Getting ready to start at Princeton to finish her doctorate,
she needed all the head space she could muster.

Lost in her own thoughts, Sarah barely
noticed the concert had started. She shifted her gaze to the stage.
Bo Branson wasn’t Sarah’s type. Shaggy sandy brown hair peeked out
from under a black cowboy hat that looked like it had been run over
by a bus. Sitting in seats right in front of the stage, Sarah could
see his eyes were light and that he had dimples. He looked like a
guy who smiled a lot, a born flirt. And he was big: big hands, big
black boots, big bi-ceps hardly contained by his dark t-shirt. He
was not her type at all…but for some reason his brand country sexy
symbol was doing it for her tonight.

“
Thanks for comin’ y’all.”
He said when he’d settled on a stool in front of the mic. “It’s
good to be back in Nashville.”

Bo launched into his first song. That
voice—wow, shivers. The good kind. His voice was deep and resonate
and given the acoustics in the auditorium, the reverberations shot
straight to Sarah’s sweet spot. She could imagine him whispering in
her ear…saying her name. Or maybe just groaning a little to let
Sarah know he liked what she was doing to him.

Bo Branson was
Emily’s
obsession. She’d
been looking forward to this night for weeks. Emily was the one
going on the date with Bo while Sarah planned to head back to the
hotel after the show to catch up on some reading. She really needed
to quit fantasizing about Emily’s crush.

Country music was not Sarah’s thing.
The twangy guitar, the cheesy lyrics—she just didn’t get it. But
seeing Bo do something he clearly loved was a big turn-on. He had
passion, confidence, swagger. Not traits Sarah ever thought she’d
be attracted to. Her exes had always been serious, intellectual and
conservative. No surprises, just as Sarah liked it.

But something about the look in Bo’s
eye told Sarah Bo could go totally alpha between the sheets, and
that Sarah would love every second of it.

As if Bo could sense the naughty
thoughts flowing through Sarah’s mind, his gaze locked on hers. He
held her gaze for a moment, then winked at her before looking away.
Sarah wiped her suddenly sweating palms on the skirt of the sexy
red dress Emily had insisted she buy to go along with the matching
thong panties.

The music, the people and the lights
faded as Sarah focused on Bo with laser intensity. She felt drawn
to him, unable to look away. He met her gaze again, flashing his
dimple before he gave his attention to the crowd on the other side
of the stage.

Was she imagining things? Or was he
singling her out? No one ever singled out Sarah. Emily had always
been the flashy sister and Sarah the one who faded into the
wallpaper. Sarah had always been fine with that, uncomfortable in
the spotlight. Surely Bo had been flirting with someone else in the
crowd.

“
What did you think?”
Emily asked, an hour later when Bo had finally left the
stage.

Sarah blinked, feeling like she was in
a daze. It had felt like Bo was singing to her personally, though
that was ridiculous, of course.

Emily rolled her eyes. “You just don't
get it. It's not just about the music. It's real life. Aches,
pains, heartbreak. Emotion.”

“
I can do without the
heartbreak.” Sarah struggled to sound blasé. “Now, Yo-Yo Ma? That’s
real emotion.”

“
Whatever. It was a good
show. I'm not going lie about that. I can see why you like Bo
Branson so much. He is a great performer and he has a nice
voice.”

Sarah felt sweat begin to bead on her
forehead. “I guess. If you like the handsome, muscular, alpha-male
type.” Sarah hoped she seem nonchalant, and that Emily didn’t
detect the breathiness in her voice as she lied.

Emily gave her a confused
look. “Who
doesn't
like that kind of guy? It makes my womb quiver just thinking
about nailing him.”

Sarah felt panic rise up in her belly.
Emily was seriously going to sleep with him. “Don't get us
arrested, okay? Sexual assault is a crime in every state. ‘No’
means no.”

“
Oh, there won't be any
assaulting,” Emily said. “Once we meet-and-greet each other, it'll
be game over.”

Sarah forced the panic down. “Just
remember we’re sharing a hotel room. No hanky-panky in the room,
okay? I’m going to turn in early. Moving is exhausting.”

“
Deal,” Emily said, and
hugged her Sarah. “Can you believe we’re really here and about to
meet Bo Branson? I'm so excited, I can't wait.”

The sooner she got Emily to where she
needed to be for her date, the sooner Sarah could head back to the
hotel, distract herself with that new biography of Bronson Alcott,
and forget all about Bo Branson. “How, exactly, are we supposed to
get backstage?”

“
The promotions guy from
the radio station is supposed to meet us out here.” Emily said.
“His name is Stan or Sam or something like that.”

Sarah shifted from foot to foot. Would
Emily think it strange if she went ahead and left now, before they
met Bo in person? She could go on back to the hotel and quietly
lose her mind in private.

“
There’s my guy,” Emily
said, gesturing to a good-looking guy in a white button-down shirt
and black slacks appeared at the side exit to the auditorium. He
looked around and seeing Emily and Sarah, headed in their
direction.

Too late to escape. “How can you
tell?”

“
He practically has
desk-jockey tattooed on his forehead.”

Emily was correct. The guy waved to
them, and then crossed over to the middle section where they were
sitting.

“
Hello ladies,” he said
smoothly. “Is one of you Emily Kingston?”

“
That's me,” Emily said.
She was practically bouncing up and down like a tween girl at a boy
band concert.

The man stuck out his hand. “Sean
Spencer, WBTR,” he said. “I think we spoke on the
phone.”

“
Oh, right,” she said.
“You're the one who sent the tickets and set everything up,
right?”

Sean was more Sarah’s type. His neat,
clean-cut appearance and pristinely pressed dress shirt announced
that he was a steady, dependable sort. Professional. Not a playboy
artist who used women like a paper napkin, tossing them aside when
he was through. Of course, Sarah couldn’t say for sure that’s what
Bo was like. But considering how attractive and charismatic he was,
even from a distance, it seemed like a distinct
possibility.

“
Sarah is getting ready to
start her PhD at Princeton,” Emily said, as Sarah and Sean shook
hands.

“
I know the American
Renaissance writers,” Sean replied. “I actually studied literature
at Vanderbilt. But when I got out, jobs in American Lit were a
little scarce. That's how I got into radio.”