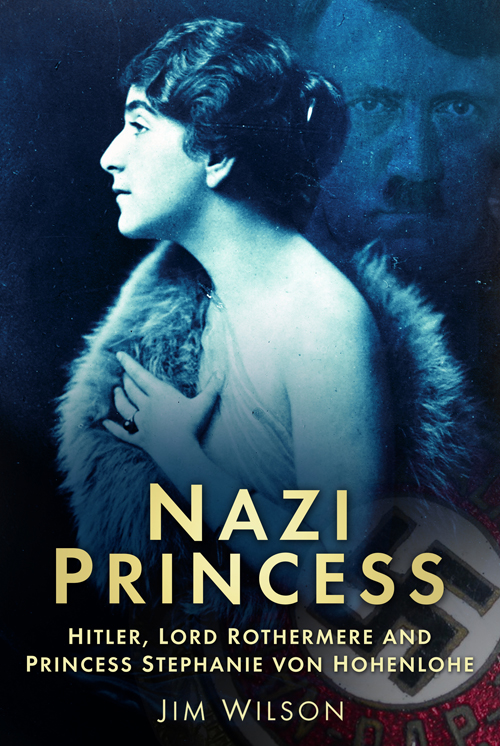 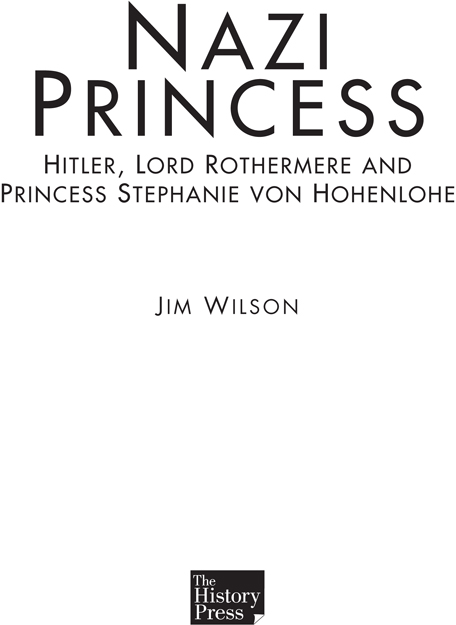 In memory of my Father and Mother, James & Winifred Wilson and their friends Jack & Annabel Kruse

Throw of the Dice

A Friend in Berlin

Threat from the Sky

The Language of Butter

The Princess, the King and Wallis

Intrigue in America and London

Comic Opera in the High Court

Trailed by the FBI

The populace get angry with fervent admirers of the arch-villain.

I learned to admire the excellence of British propaganda. I am convinced that propaganda is an essential means to achieve one’s aims.

I felt compelled to write this book for a number of reasons.

First, by any standards, and whatever view one takes of her motives or her actions, Her Serene Highness Princess Stephanie von Hohenlohe-Waldenburg-Schillingsfürst was a fascinating character. The so-called ‘personal ambassador’ for Lord Rothermere, one of Britain’s foremost newspaper owners, yet at the same time Hitler’s ‘
lieber Prinzessin
’, ‘dear Princess’. As the world moved inexorably towards world war, hers is a story of intrigue, manipulation, espionage and duplicity in Britain, the United States and Europe. She carried this off with charm, intelligence and undoubted political skill. If it suited her cause, and it frequently did, she exercised the attributes of temptress and seducer.

Second, her exploits during the 1930s encompass an absorbing cast of characters at a crucial time in history, when the policies of influential people in Europe and America were being played out against the receding shadow of one terrible world war, and in the gathering storm of another; in a climate of misunderstanding, appeasement and the dangerous blooming of fascist dictatorship.

Third, an intriguing thread runs through the narrative of links to my own family. Indeed, much of this story might never have happened had my Great-Aunt Annabel not made the fatal introduction that threw Lord Rothermere and the princess together, which led to her passionate love affair with Adolf Hitler’s closest adjutant, and made Stephanie, born a Jewess, the Führer’s ‘dear Princess’.

Without access to secret British intelligence files, only derestricted and released to The National Archives in 2005, and a large collection of Princess Stephanie’s own papers now held in the Hoover Institution Archives at Stanford University in California, it would not have been possible to tell her story.

Finally, my thanks to my wife Judith for her loving support and her patient forbearance.

The British secret service described her as ‘the only woman who can exercise any influence on Hitler’.
1
The FBI called her ‘dangerous and clever’, and as a spy ‘worse than ten thousand men’.
2
Hitler referred to her as his ‘dear Princess’. Lord Rothermere, newspaper magnate and owner of the
Daily Mail
, employed her as his go-between with Hitler and his henchmen. She was courted in British, American and European high society, and she had access to most of the royal families of Europe. But others, particularly those who knew of her deception, regarded her as a temptress, manipulative and immoral, and prepared to use any means to gain her ends.

She was Princess Stephanie von Hohenlohe-Waldenburg-Schillingsfürst, mistress of Hitler’s closest adjutant and a political intriguer of extraordinary ingenuity and skill. Duplicitous, intelligent and charming, as the 1920s and ’30s drifted from the horror of one world war to the unknown terrors of the next, she wormed her way into British society, spreading Nazi propaganda at the highest levels. With her lover Fritz Wiedemann, Hitler’s commanding officer in the First World War and then his personal adjutant, she pursued Hitler’s mission in the United States fostering Nazi sympathies and working in the Nazi interest to keep America out of the war. The story of the princess and the newspaper proprietor is one of double-dealing and irony. What began as a genuine attempt to foster a closer understanding between Britain and the new dictatorships in Europe, ended in the most devastating war in history. Yet post-Second World War, Princess Stephanie emerged from internment in the United States to move in some of the highest circles in Washington as the guest of Presidents.

Many in influential positions in Britain, who might have been expected to show greater foresight, pursued a path of appeasement with Nazi Germany as Hitler inflamed tensions on the path to Europe’s second disastrous world war. None did so with more tangled motives than one of the most powerful propagandists of his time, a genuine visionary and friend of Churchill. The story of Lord Rothermere, co-founder of the
Daily Mail
, and his dangerous flirtation with Hitler through the machinations of the Führer’s Nazi princess, might stretch the imagination were it not true, as indeed would the extraordinary cast of characters who feature in it. One who played a pivotal part was Annabel Kruse, my great-aunt. She and her wealthy husband, owner of one of the most iconic collections of classic touring and rally cars between the wars, were close friends of both the princess and Lord Rothermere. Together they were the catalyst for this story of espionage and propaganda which, until secret MI5 files were declassified and released to The National Archives in 2005, could not be fully told. It is what these files contain, together with records and memoranda from America’s Federal Bureau of Investigation, which prove how seriously the authorities in both countries regarded the princess’ activities. They also point to the fact that although it was the press baron Lord Rothermere who employed her, it was the Führer to whom she gave her loyalty. Princess Stephanie spent half a lifetime denying what was obvious to those who knew her story, but with nerve and force of will she overcame all the suspicions and accusations to carve out a distinguished career in the 1950s and ’60s as a ‘fixer’ for some of the most prominent publishers and newspaper owners in Europe and the United States.

My great-aunt was American, born Annabel Adora Belita Maria Colt in Georgia, Alabama, in 1893. Her father, George R. Kane, was owner of a chain of hotels. Her mother, Alma, was Spanish. With that clear Spanish blood in her family background she possessed the personality and temperament that came with it. She was petite, slim and full of fun, an intriguing girl with the ability to electrify any company. When she married my father’s uncle, George Wilson, Annabel was only 21 but she had experienced the highs and lows of emotion in her life, having already been married and widowed. George brought her the companionship she was seeking. He was a ships’ purser on a liner plying the North Atlantic passage between Liverpool and New York, and an on-board romance blossomed between them. They were married on 13 April 1914 in the grand surroundings of New York’s City Hall. Annabel’s address at the time was 610 West 127th Street, New York. On the impressive marriage certificate, now lodged in The National Archives at Kew and signed personally by an alderman of New York City Council, George gave his rank as ship’s officer from Hartlepool, England.
3
The marriage lasted through the horrors of the First World War, but for whatever reason the relationship broke down and in 1923 Annabel was granted a decree nisi. The marriage was over when Annabel again crossed the Atlantic in 1924. She may have been contemplating moving back to the United States permanently, but a chance meeting in New York changed her life entirely. The man Annabel met and fell for in New York was Jack Frederick Conrad Kruse, a flamboyant, extremely handsome, 30-year-old eldest son of a banker. Kruse was not only physically attractive, he was a man with a distinguished war record, a captain in the Royal Navy Reserve, and seriously rich.

Jack Kruse was born in South Weald, Essex, on 20 September 1892. His father, Herman Conrad Kruse, was from a family that had originated from Germany and subsequently migrated to Holland. Before Jack was born, the family uprooted again, this time to settle in England. Jack was educated at a series of public schools and by the age of 20 he was managing an 800-acre fruit farm at Salehurst in Kent, owned by Sir Harold Harmsworth. Harmsworth was one of two remarkable brothers, Alfred and Harold, who together in May 1896 had founded the
Daily Mail
. Alfred was in many respects the inventor of the modern newspaper. He was a Fleet Street genius, whose brilliant news direction and unrivalled understanding of what would sell newspapers in quantities never before achieved, alerted readers of the
Daily Mail
to events that would change their lives. His flair was to produce a newspaper that grabbed its readers’ attention and held their loyalty in a way previous publications had never been able to achieve. He invented the banner headline and put emphasis on human interest stories, as well as introducing a much wider coverage of sport. Within three years of the Harmsworths founding the
Daily Mail
,
it was selling over a million copies daily.

Alfred and Harold were the proprietors who ensured modern journalism came of age. The Harmsworths followed their ambitious expansion of the popular press by founding the
Daily Mirror
in November 1902. Their newspapers’ campaigns during the First World War arguably changed the course of the war and influenced the policies of the politicians who were prosecuting it. They owned the most popular newspapers on the Western Front. The soldiers in the trenches found the
Mail
and the
Mirror
reminded them of home. They enjoyed the way they carried so many pictures of life back in Blighty. The
Daily Mail
and the other Harmsworth publications also set the pace for the introduction of new technology. A year after the
Mail
was founded a telegraphic link was established between London and New York, the first transatlantic connection in Fleet Street. Through Alfred’s uncanny grasp of the headlines, features and competitions that would appeal to a mass audience, the
Mail
became the biggest success story in Fleet Street. Three years after the founding of the
Mirror
, Alfred was elevated to the peerage with the title Lord Northcliffe.

Harold’s genius was in finance. He understood the stock markets; he had a reputation for successful investment; he excelled in projections of profit and loss and he controlled costs robustly. His task was to make his brother’s prowess at journalism pay, and he did it so successfully that the two brothers came to own the largest magazine empire in Britain, and two-thirds of the newspaper titles on Fleet Street. Harold, like his brother, was also elevated to the peerage from the Baronetcy he had held since 1910, associated with his then estate at Horsey in Norfolk. In 1919 he took the title of Lord Rothermere. When Northcliffe died, three years later in 1922, Rothermere inherited all the publications and became reputedly the third richest man in Britain, with an estimated fortune worth £780 million in today’s money.
4
By 1926 he had driven the
Daily Mail
to a daily sale of two million.

A Crimson Dawn by Janet MacLeod Trotter
Deadly Sin by James Hawkins
Rogue (Book 2) (The Omega Group) by Andrea Domanski
A Hint of Witchcraft by Anna Gilbert
The Lime Pit by Jonathan Valin
Collected Fictions by Gordon Lish
Virginia Hamilton by Justice, Her Brothers: The Justice Cycle (Book One)
Last Night I Sang to the Monster by Benjamin Alire Sáenz
Fathermothergod: My Journey Out of Christian Science by Lucia Greenhouse
John Fitzgerald GB 05 Great Bra by Great Brain Reforms