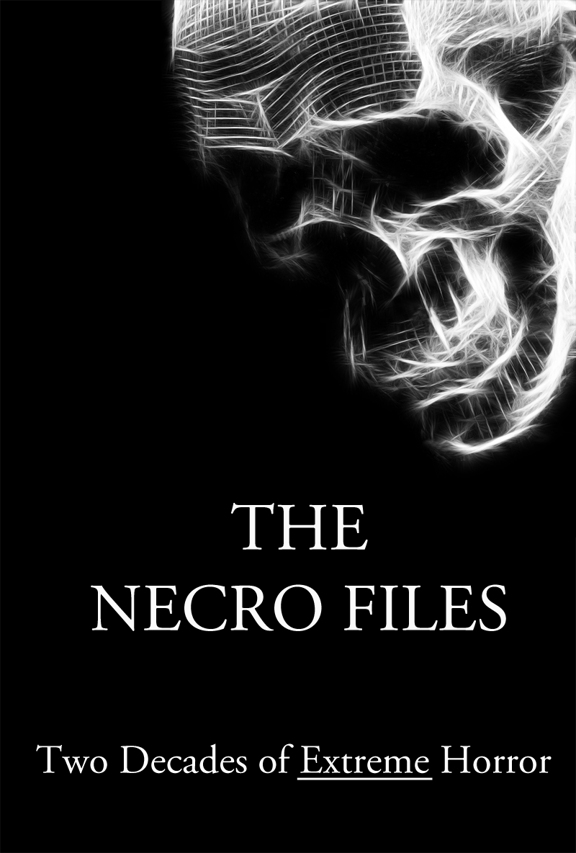 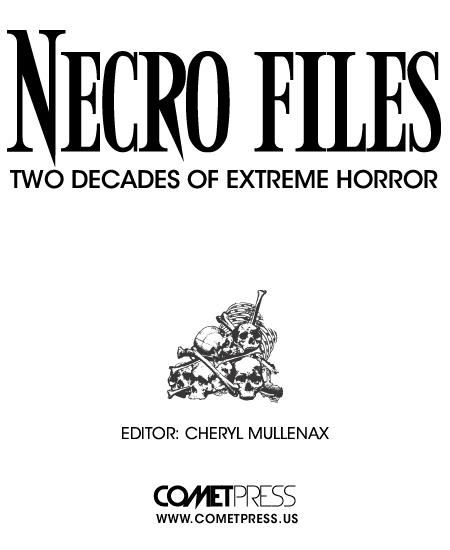 A Comet Press Book
First Comet Press Trade Paperback Edition October 2011
Trade Paperback ISBN 13: 978-1-936964-52-9
Necro Files
© 2011 by Comet Press All Rights Reserved.
Cover Illustration by Guilherme “RazGriz”
This book is a work of fiction. People, places, events, and situations are the product of the author’s imagination. Any resemblance to actual persons, living or dead, is purely coincidental.
No part of this book may be reproduced or transmitted in any form or by any electronic or mechanical means, including photocopying, recording or by any information storage and retrieval system, without the written permission of the publisher, except in the case of brief quotations embodied in critical articles and reviews.
Visit Comet Press on the web at: www.cometpress.us

Cannibalism, necrophilia, aberrant sex, gore, murder, serial killers, mutilation, torture, child abductions, even werewolves and zombies are all common themes of extreme horror and in this book. But often more than anything it gives us a frightening glimpse into the dark side of humanity, and sometimes even closely reflects true events. We like to be scared, and while the supernatural is very scary, reality is downright disturbing. We are fascinated by mysterious things, and nothing is more mysterious than the unspeakable mayhem and horrors that humans are capable of. Heinous, motiveless crimes fill us with fear and revulsion, yet we are overwhelmingly compelled to read about them. Maybe it is a fear of what may lie dormant within us as well, or perhaps provides an outlet for our own dark thoughts. The media is very aware of this innate human trait and feeds us increasingly over-the-top descriptions of violent crimes and graphic images. And the recent rise in popularity of so-called "torture porn" films like Saw and Hostel underscores this compulsion to experience our violent side from a safe distance.

Necro Files is a collection spanning over twenty years, from the early formative years of extreme horror to the recent past, by twenty great masters and modern authors who have broken down the barriers of traditional horror to explore the most sinister and controversial topics that both challenge and offend our sensibilities. You'll find here an author's first steps into the realm of the extreme, stories that were banned by the publisher, stories based on true events, and many include a quote or comment by the author. Most were first published in the small press, and nowadays, luckily, it's much easier to get a hold of extreme horror, largely thanks to the wider availability of small press books. And what you have now in your hands is an ungodly collection of edgy, unrestrained terrors that delve into the dark recesses of the mind and ultimately satisfy your primal instinct.

Enjoy the ride into hell.

George R.R. Martin was born September 20, 1948 in Bayonne, New Jersey. He became a comic book fan and collector in high school, and began to write fiction for comic fanzines. Martin’s first professional sale was made in 1970 at age 21: “The Hero,” sold to
Galaxy
, published in February, 1971 issue. Since then he has published more than seventy pieces of short fiction, edited thirty anthologies, and written screenplays, teleplays, comic books, and eleven novels. He is best known for his best-selling epic fantasy series,
A Song of Ice and Fire
, the basis for the hit HBO television series,
Game of Thrones
.

Martin’s present home is Santa Fe, New Mexico, where he lives happily with his wife Parris and four cats.

They came straight from the ore-fields that first time, Trager with the others, the older boys, the almost-men who worked their corpses next to his. Cox was the oldest of the group, and he’d been around the most, and he said that Trager had to come even if he didn’t want to. Then one of the others laughed and said that Trager wouldn’t even know what to do, but Cox the kind-of leader shoved him until he was quiet. And when payday came, Trager trailed the rest to the meathouse, scared but somehow eager, and he paid his money to a man downstairs and got a room key. He came into the dim room trembling, nervous. The others had gone to other rooms, had left him alone with her (no,
it
, not her but
it
, he reminded himself, and promptly forgot again). In a shabby gray cubicle with a single smoky light.

He stank of sweat and sulfur, like all who walked the streets of Skrakky, but there was no help for that. It would be better if he could bathe first, but the room did not have a bath. Just a sink, double bed with sheets that looked dirty even in the dimness, a corpse.

She lay there naked, staring at nothing, breathing shallow breaths. Her legs were spread, ready. Was she always that way, Trager wondered, or had the man before him arranged her like that? He didn’t know. He knew how to do it (he did, he
did
, he’d read the books Cox gave him, and there were films you could see, and all sorts of things), but he didn’t know much of anything else. Except maybe how to handle corpses. That he was good at, the youngest handler on Skrakky, but he had to be. They had forced him into the handlers’ school when his mother died, and they made him learn, so that was the thing he did. This, this he had never done (but he knew how, yes, yes, he
did
); it was his first time.

He came to the bed slowly and sat to a chorus of creaking springs. He touched her and the flesh was warm. Of course. She was not a corpse, not really, no; the body was alive enough, a heartbeat under the heavy white breasts, she breathed. Only the brain was gone, ripped from her, replaced with a deadman’s synthabrain. She was meat now, an extra body for a corpsehandler to control, just like the crew he worked each day under sulfur skies. She was not a woman. So it did not matter that Trager was just a boy, a jowly frog-faced boy who smelled of Skrakky. She (no
it
, remember?) would not care, could not care.

Emboldened, aroused and hard, the boy stripped off his corpsehandler’s clothing and climbed in bed with the female meat. He was very excited; his hands shook as he stroked her, studied her. Her skin was very white, her hair dark and long, but even the boy could not call her pretty. Her face was too flat and wide, her mouth hung open, and her limbs were loose and sagging with fat.

On her huge breasts, all around the fat dark nipples, the last customer had left tooth-marks where he’d chewed her. Trager touched the marks tentatively, traced them with a finger. Then, sheepish about his hesitations, he grabbed one breast, squeezed it hard, pinched the nipple until he imagined a real girl would squeal with pain. The corpse did not move. Still squeezing, he rolled over on her and took the other breast into his mouth.

And the corpse responded.

She thrust up at him, hard, and meaty arms wrapped around his pimpled back to pull him to her. Trager groaned and reached down between her legs. She was hot, wet, excited. He trembled. How did they do that? Could she really get excited without a mind, or did they have lubricating tubes stuck into her, or what?

Then he stopped caring. He fumbled, found his penis, put it into her, thrust. The corpse hooked her legs around him and thrust back. It felt good, real good, better than anything he’d ever done to himself, and in some obscure way he felt proud that she was so wet and excited.

It only took a few strokes; he was too new, too young, too eager to last long. A few strokes was all he needed—but it was all she needed too. They came together, a red flush washing over her skin as she arched against him and shook soundlessly.

Trager was drained and satisfied, but he had more time left, and he was determined to get his money’s worth. He explored her thoroughly, sticking his fingers everywhere they would go, touching her everywhere, rolling it over, looking at everything. The corpse moved like dead meat.