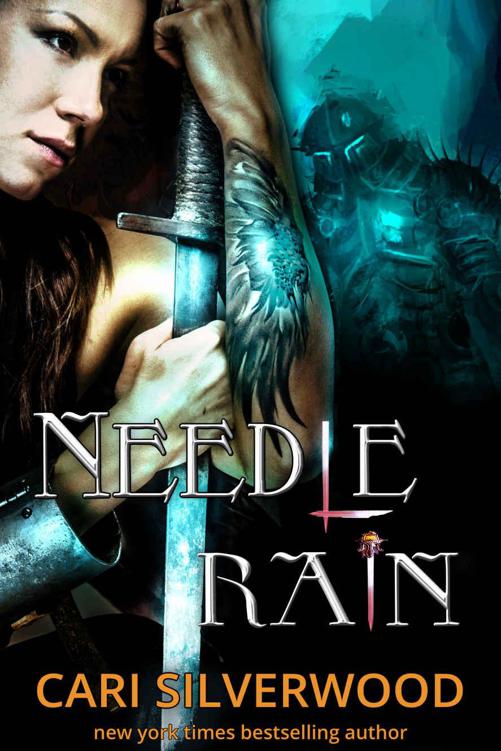 A GLOSSARY of the new words used in this story and a MAP can be found at the end of this book. See the CONTENTS page of the book.

Magience
is a book set in this same fantasy world.

Needle Rain
is not connected to
Magience
in any way, except for the setting.

From her perch straddling the round stone of the balustrade, Heloise could see for miles across the city of Carstelan. Momentarily she rested her gaze on the many-tiered behemoth of the Imperator’s palace to the north then on the harbor teeming with ships to the north-west. Masts stuck up against the sky in a morass of black sticks against the blueness. Closer still were the Imperial barrack grounds.

The view and the lack of stench were two reasons why she chose to sit there for breakfast. She took another bite from her pie, chewing blindly. It tasted vaguely of dodo and definitely of chicken. Not surprising for a pork pie from Defatt’s bakery. With her spare hand she unhooked from her belt her trinketton telescope. It was a recent present from her uncle. The eagle animus used to create the telescope made its optics second to none and the brushed-bronze and embossed gold feathers along the barrel gave it a pleasing feel. She zoomed in on her target – the soldiers on the barrack grounds.

She smiled. Five men were using the exercise area and they had stripped down to loincloths. One man looked as if his muscles would pop if you pricked them with a pin. She skipped to another who looked more naturally proportioned. Yes, much better.

“Heloise.” Uncle Bruno’s voice came from close by. She started and wobbled on the balustrade then steadied herself by holding on tighter with her thighs. Act calm. He couldn’t know what she’d been looking at.

She turned, raising her eyebrows.

Her uncle regarded her gravely. “I didn’t give you those so that you could study anatomy.”

Try as she might to avoid it, the heat rose on her face.

She half-slid, half-hopped to the balcony floor, feeling the gritty stone rub against her deer-hide leggings. The floor wasn’t as far as she thought. Nine or ten years ago she’d have needed a footstool. “I was only, only...ah, sorry, uncle.”

“Thank you. For not lying to me. Though I expect you to improve on your poker face else our customers will be unimpressed.”

By customers she knew he meant the debtors her uncle’s company chased to retrieve what was owed. She called them idiots. Clients were those the idiots owed money to. Anyone who got themselves into that sort of pickle deserved trouble.

“Let’s talk out here. The office is far too stuffy.” Her uncle pulled over a wrought-iron chair and sat at the matching round table. Though not a fat man, the seat made him appear so. His buttocks dwarfed the dainty furniture. He placed his large hands on the tabletop, palms down, fingers outspread. The square nails were neat and painted black. He was overall a neat man and careful. His short hair stood unmoving, combed or not, but the black stubble on his chin spoke of an exceptionally hurried morning.

He hadn’t invited her to sit. This was business. Hastily she balanced the remains of her pie on the balustrade, put away the telescope, and stood straight and attentive. “Sir?”

“Are you ready for a step up?” He lifted one finger into the air. “There’s a visit coming up tomorrow. Don’t say yes unless you are completely sure. Your father, god rest his soul, would never forgive me if I got you injured. Whenever I see you, I see Garth. Same brown hair and eyes and same courage. Enough to fill a lion’s heart.” He smiled sadly.

He didn’t mention her mother. It still irked her. So her father had sailed away in a ship and never come back. To stay behind, hoping, waiting for him to return, alone and without support, that would surely be worse? She didn’t blame her mother for selling herself for money, or rather, she didn’t blame her anymore. Why should he?

“I’m ready.” She quelled the whisper of doubt in her mind.

“Good. You’ve done well so far.” He sat back in the chair. “This is no ordinary citizen down on his luck. This is a zhenjui Needle Master, Thom Dragar, a respectable man. Or he was until his wife died and he became addicted to somm.”

“Somm? Isn’t that the séance drug?”

“You can call it that. He’s using it to talk to his dead wife. Or so they tell me. Our client is owed two thousand four hundred grints.”

She whistled at the large sum of money and ran through the possibilities in her head. Somm was rare. Which made it expensive. “And our client is the somm dealer?”

“Does that bother you?”

“Good girl.” He smiled. “Business is business. Just be careful. One clean, sweet run at him to gauge your chances and see the property. Try him; he might give in. If not, second time go for the kill. In which case, take Bull, Tinman, Sonja and three others.”

Heloise struggled to keep her eyebrows down. It was a second before she trusted herself to speak. A step up meant the possibility that leaning on them with words would not be enough. She’d known this forever. So why did it feel like the world had turned to stone?

“That many?” Sweat prickled the back of her neck.

“That many. Somm can make some addicts unpredictable.”

He was babying her. No one needed that many. “So we’re looking for a sign-over of the property where he works or cash?”

“The property will be the only thing he still possesses that will add up to enough.”

His light blue eyes held hers, and she knew he was looking for any sign of hesitation, a reason to take her off the job. But...she could do this. When she talked to customers, more of them handed over without any violence or threats needed than for anybody else uncle employed. The boys and girls, uncle’s standover soldiers, they all joked and said it was her pretty blue eyes but she just had a knack for convincing people.

He added, “People in this deep don’t have sacks of gold coins in their basement.”

“Course not. Anything else I should know?”

Uncle stood, thrusting back the chair, pulling himself straight.

“He has a nine-year-old daughter that he dotes on. Come over here, Heloise.” He beckoned her to the balustrade near him. They stood together, staring out over the city. “You see those men down there. The ones you were ogling? It’s okay! You’re a healthy young woman. I’m sure they look good to you. Me? Not so much!” He guffawed.

“I’ll say no more. Anyway, those men, they are soldiers of the Imperator. They do an important job. Guarding the Imperium and so forth. You...” He touched her lightly on the shoulder, “...and my boys and girls, you are the soldiers of money. And that is important too. Without it, none of this...” He gestured, sweeping his hand across the sky from horizon to horizon, “... would function. Understand?”

“Yes.” She shuffled her feet, hoping this wouldn’t take much longer. Her pie was growing cold and her stomach seemed to be growing emptier.

“Good. Good.” He breathed in deep through his nose and slapped the balustrade with both hands. “
Ahh.
Beautiful air. Expensive air. A hundred years ago this building we stand in belonged to Rogi Vassbinder, the Needle Master who discovered how to make Immolators. A famous and rich man, until he vanished into the jungles up north. And now I own it. That’s the progress of civilization. One day it might be yours.” He winked. “Think on it.”

That made her pause. Hers? She waited until he’d gone back inside to his office then looked around, seeing the building in a new light. It was a solid stone edifice, rectangular in cross-section with its gaunt gray face softened by a scattered family of gargoyle sculptures and the stone-carved vegetation that featured on most of the corners and edges.

Uncle had no children, but this was the first time he’d mentioned the possibility of her inheriting from him. Yasminn, his latest wife, would not approve. It was no secret she craved higher society. Though Uncle seemed blind to her nature, she kept her talons well sharpened on the servants and even, sometimes, on Heloise.

She couldn’t imagine herself owning this place. It was Uncle’s in every way – no matter that once upon a time it had belonged to a famous Needle Master. Rogi Vassbinder? She shivered and hugged herself. It wasn’t the breeze and the thinness of her brocade shirt that cooled her skin. The day was warm; the air muggy with tropical moisture.

There were stories of a hidden fortress on the borders of the Clandom forests where Vassbinder’s ghost haunted the jungles of the Bloodmen, sticking needles into the eyes of naughty children while they slept.