Read Neptune: The Allied Invasion of Europe and the D-Day Landings Online

Neptune: The Allied Invasion of Europe and the D-Day Landings 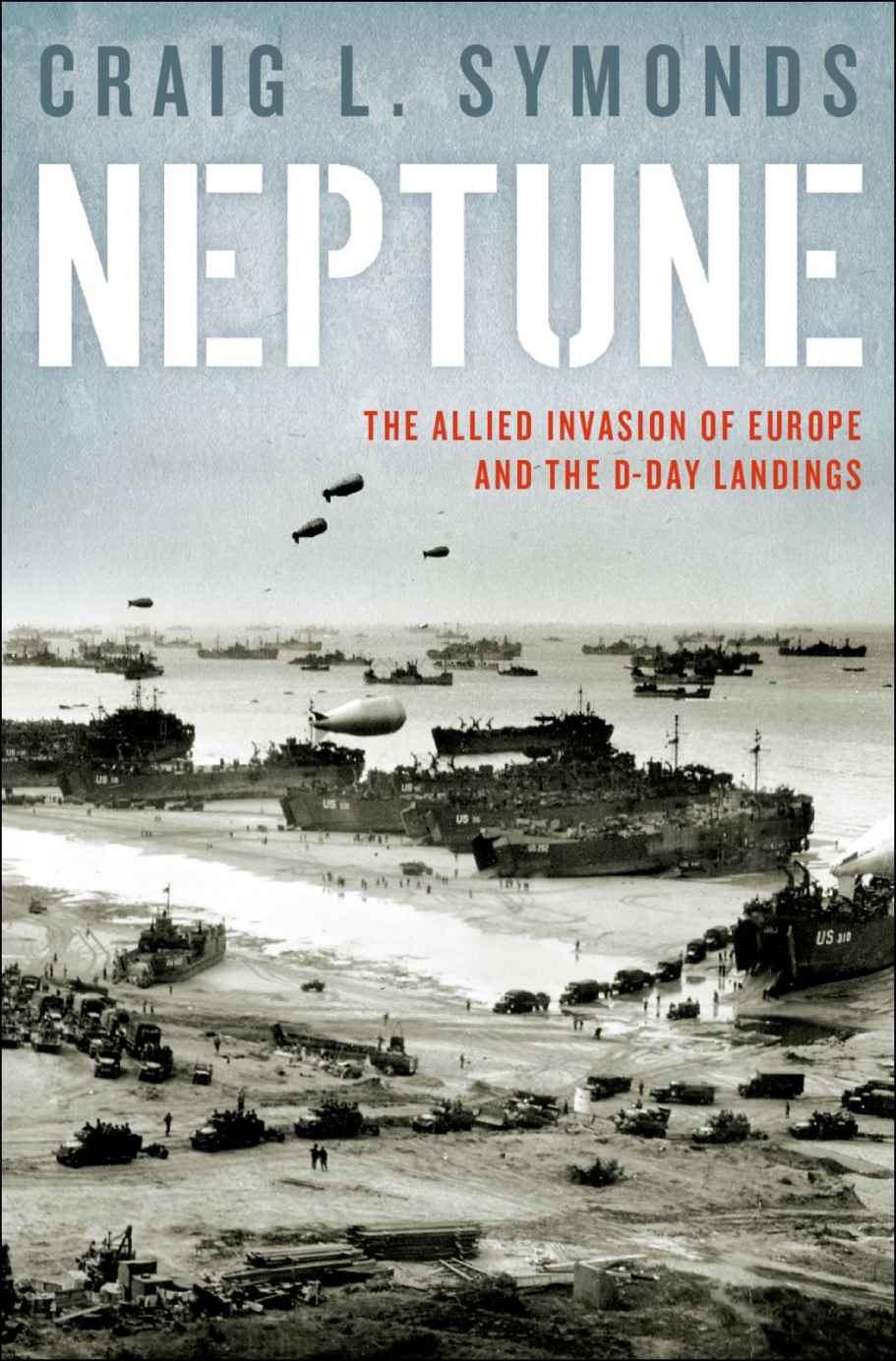 THE ALLIED INVASION OF EUROPE AND THE D-DAY LANDINGS

Oxford University Press is a department of the University of Oxford.
It furthers the University’s objective of excellence in research, scholarship, and education by publishing worldwide.

Oxford is a registered trade mark of Oxford University Press in the UK and certain other countries.

All rights reserved. No part of this publication may be reproduced, stored in a retrieval system, or transmitted, in any form or by any means, without the prior permission in writing of Oxford University Press, or as expressly permitted by law, by license, or under terms agreed with the appropriate reproduction rights organization. Inquiries concerning reproduction outside the scope of the above should be sent to the Rights Department, Oxford University Press, at the address above.

You must not circulate this work in any other form, and you must impose this same condition on any acquirer.

10.
“A Hum Throughout the Country”

14.
“The Shoreline Was Just a Shambles”

The Plan for the Mulberry Harbor off Omaha Beach

Neptune is a joint British–United States Operation, the object of which is to secure a lodgment on the Continent from which further offensive operations can be developed. It is part of a large strategic plan designed to bring about total defeat of Germany by means of heavy and concentrated assaults upon German-occupied Europe from the United Kingdom, the Mediterranean, and Russia.

F
OR MANY
, and for Americans in particular, the mention of D-Day conjures up an image of Omaha Beach, very likely that moment when the bow ramp of a landing craft drops into the surf and young soldiers, some of them teenagers, charge out to meet their fate. Whether because of Hollywood depictions or the haunting and harrowing photos taken by Robert Capa that day, it is a moment that has become etched in our national memory. And so it should. It reminds us of the terrible cost of war and of the sacrifices of those who bear it.

But it is a moment with a long backstory, one that has been told only in fragments and which is too often overlooked. Before the first landing craft nudged up onto the sand, before the first soldier stepped out onto the beach to face that merciless machine gun fire, a great deal had to happen. Men burdened with the responsibility of strategic decision making had to order it; others challenged to make it possible had to plan it; still others had to design and build the ships that carried the men and their equipment first
from America to England and then, after months of training, across the Channel to occupied France. The Allied invasion of the Normandy beaches on June 6, 1944, bore the designation Operation Overlord, but everything that came before it, including the surge across the Channel and the landing itself, was part of Operation Neptune, and D-Day could not have taken place without it.

Neptune, the Roman god of the sea, is traditionally depicted as a bare-chested, muscular, white-bearded deity, often wielding a trident and driving a chariot pulled by seahorses. At the Quadrant Conference at Quebec in May 1943, where the Combined Chiefs of Staff of Britain and the United States confirmed the long-delayed decision to invade German-occupied France one year hence, it seemed an appropriate designation to apply to the massive amphibious operation that had just been approved. “Massive” is not an overstatement. Operation Neptune was the largest seaborne assault in human history, involving over six thousand vessels and more than a million men. This book is a study of how the British and Americans managed to overcome divergent strategic views, Russian impatience, German U-boats, insufficient shipping, training disasters, and a thousand other obstacles to bring the Allied armies to Normandy and keep them there.

Many of those at the Quebec conference who solemnly affirmed the decision to invade the European continent in the spring of 1944 wondered at the time if it represented anything more than wishful thinking, for the shipping needed to conduct such an invasion simply did not exist. The Americans, confident that their unrivaled industrial capability could meet any challenge, were far more sanguine than the British, who could barely conceive of an armada of six thousand ships. After all, ships were needed to maintain the lifeline of supplies from the United States to both Britain and Russia; more ships were needed to transport a million or more American soldiers across the ocean, and then to supply them with mail and cigarettes; still more were needed to ferry the jeeps, trucks, tanks, bombs, bullets, fuel, and all the other tools of war from the United States to England. And to guard these vessels from the predations of enemy U-boats, escort ships—destroyers, corvettes, and auxiliary aircraft carriers—were needed as well.
For the invasion itself, still more ships of a quite specialized type were needed to transport the invaders and their equipment across the Channel to the landing beaches, and then to evacuate the wounded and the prisoners back to Britain. And all of this had to be accomplished while still more ships—thousands of them—carried out a naval war against Japan halfway around the world. These ubiquitous demands put severe pressure on the decision makers. During World War II, a dearth of shipping was the key logistical constraint in Allied decision-making, and because of it, the most important Anglo-American strategic decisions of the war were less a product of what they
wanted
to do than of what they
could
do.

All the great milestone events of military history have a strategic element, a logistical element, and an operational element. Strategic planning for Neptune began even before the United States entered the war, with the formation and development of the Anglo-American partnership. From the moment the British Expeditionary Force evacuated the beaches of Dunkirk in late May and early June 1940, British planners—and soon enough American planners—began to consider how, when, and where the Western Allies could reenter the European continent in force. The urgency of such planning varied dramatically between 1941 and 1944, and almost as dramatically between the ostensible partners, with the British far less eager than the impetuous Americans, or after June 1941 the hard-pressed Russians, to sanction a swift return to the Continent. These issues became topics of sometimes sharp exchanges between the English-speaking allies. There were also disagreements, misunderstandings, and rivalries between and among the various services within each country, including disputes about the relative importance of an expanded Pacific War or an all-out commitment to strategic bombing. In the end, a consensus, if not quite unity, was achieved, and Europe was liberated, though it was, as Wellington said of Waterloo, a near-run thing.

A necessary second step involved the development of the wherewithal needed to secure the common goal. That included the men, of course, and between 1942 and 1944, millions of Americans were torn from their Iowa farms and Brooklyn tenements and transformed into soldiers and sailors.
It included women, too, who served not only in uniform but also in the factories and shipyards that produced the tools of war: the planes, tanks, trucks, and especially the ships needed to put a million men ashore on a hostile beach and sustain them there. There is an old saw among practitioners of the military art that “amateurs talk strategy; professionals talk logistics.” In the spirit of that aphorism, this book illuminates the essential role of Allied, and particularly American, war production with a special emphasis on the construction of ships of every kind at hundreds of American shipyards. Astonishing as their productivity was during the war years, Americans learned that there were limits after all on what could be done. There was only so much steel, only so many workers, and only so much time.

Hervey 08 - Company Of Spears by Allan Mallinson
Unbroken: Outcast Season: Book Four by Caine, Rachel
All I Desire is Steven by James L. Craig
The Bishop's Wife by Mette Ivie Harrison
The Mighty Quinns: Danny by Kate Hoffmann
The Opal Desert by Di Morrissey
Consequences by Carla Jablonski
Zombie Jesus by Edward Teach
Lost in the Apocalypse by Mortimer, L.C.
The Core of the Sun by Johanna Sinisalo