Read Never Give You Up Online 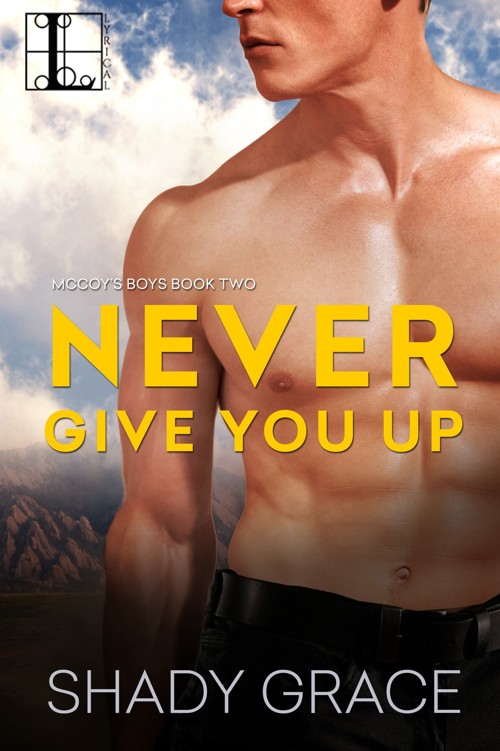 A life of crime—or a lifetime of love?

Mary Billing knows her solitary mountain life is over when a handsome stranger blows on to her land in an unmarked chopper. Terry McCoy is not only dangerous to the pretty widow’s shattered senses, he’s a hardened criminal no woman in her right mind would fall for. Yet there’s something tender about Terry—something that makes her surrender to his searing touch. Now Mary is in deep—deep enough to be taken hostage by a villain whose true target is Terry…

The son of a notorious crime boss, Terry is about to take over his murdered father’s multi-million dollar empire. But first there’s the little matter of avenging his father’s death—and rescuing the one woman he knows could turn his hard-bitten life around. Terry never wanted a life of crime, but suddenly he’s ready to do just about anything to bring Mary back…

The 1969 Charger RT weaved through traffic two cars behind.

Terry McCoy adjusted his rearview mirror and eyed the shiny black beast. The car had been following him for thirty minutes since he’d left the estate near Saanich Inlet, and the driver wasn’t even trying to be discreet.

So, you want to play games, eh?
He glanced into the rearview mirror again, and grinned at the driver’s side of the windshield as the car darted around traffic behind him. A good game of cat and mouse always got his blood pumping.

With the engine revving high, he took a left and whizzed past a minivan packed with unruly children. He winked at the frazzled-looking mother and punched his Camaro into fifth, blowing ahead of her as if she were pulling those brats by hand.

Like an angel of death, the Charger was right on his ass.

He jerked to the right then the left, veering around other vehicles as he neared the main drag along the wharf, but still he couldn’t shake him. The Charger nudged his bumper, making Terry grip the wheel tighter.

He sped up and slowed down, making the driver behind him veer around another car to his right, barely avoiding a crash. Terry laughed and accelerated again, only a few hundred yards from his destination.

As he neared the hotel parking lot he jerked hard to the right and stepped on the gas, skidding to the side then punched it harder into the parking lot, missing the hotel sign by mere inches. The Charger blew straight ahead toward the downtown core, its engine screaming, and disappeared from view.

Terry chuckled and eased the Camaro into the rear parking lot at his family’s Sea Scape Hotel. He shut off the engine and took a deep breath. The hotel was the last place he wanted to be right now, but he had to tend to his own personal business.

He glanced up and stared at the man reflected in the rearview mirror.

He looked like ten pounds of shit in a five-pound bag.

Still staring into the mirror, he released a pent-up breath and tried to clear his mind, before pulling out his cell phone.

As he dialed the number he pictured her lovely face on the other end of the line. He really needed to hear her voice. Maybe it would make him feel better. Maybe it would make his negative thoughts go away. He didn’t know why, but her sweet, seductive voice made him feel as if the world could be a good place sometimes. Right now he needed a good place.

To his bitter disappointment the answering machine kicked in.

“Hi. You’ve reached the Billings. We’re probably outside right now so please leave a detailed message and we’ll get back to you as soon as we can. Thank you!”

He couldn’t think of what to say and hung up. Low, that’s how he felt. Low and lost, and for some stupid reason he thought she would make him feel better. He punched the dash and shouted, “Fuck!” before he lowered his head against the steering wheel and closed his eyes. Now what was he supposed to do with himself? He let out a self-loathing groan and shook his head.

She still hadn’t changed the message on her machine. Obviously Mary Billings couldn’t let go of her dead husband. A dead husband who did nothing but hurt her. He deserved to be in the cold ground. He deserved to no longer be on that goddamned answering machine. It physically pained Terry to hear her speak as if everything was perfect in her world. He knew better. She should be back to her maiden name by now. Shouldn’t she? Over four months had passed since Tom’s death. How could a woman cling to a name that made her miserable? He’d never understand females. Most of all, he’d never understand Mary. Maybe that’s why he couldn’t get the woman out of his head.

A rap on the driver-side window jerked him back to the present. He looked up and into the eyes of the doorman. Terry rolled the window down. “What?”

Terry blinked. “What? But I saw him go downtown.” He glanced to his right and was stunned to see the Charger parked beside him. How did he not notice him pull up? He shook his head, grabbed his briefcase, and exited the mustang, disgusted with himself and his recent inability to concentrate.

“Everything okay, Boss?” The doorman walked with Terry to the side entrance, conveniently hidden by tall flowering shrubs. “You seem out of it lately.”

Terry strolled into the hotel with all the energy of a man on Valium. He couldn’t focus on much these days and the headaches were debilitating. He tried his best to make light of his life, to find humor in everything, but fuck all seemed to work when we was sick and tired of the same old routine. What he really needed was a vacation.

Maybe he needed a new life. Something that didn’t involve walking on eggshells every day.

Massive plants covered the vast waiting room where leather chairs and antique tables covered the black-and-white tiled floor. Several well-dressed men were gathered in one section, talking business and smoking fine cigars. Classical music resounded from the doors leading into the Tail Wind Lounge, one of the finest restaurants in the city.

The Sea Scape Hotel was well known for its old-world atmosphere, and after sixty years in business, nobody knew that today it was a fancy front for the biggest dealer this side of the border.

Hell, shipments were boated right to the hotel dock at night and brought through the back to be distributed amongst certain wealthy guests. Business didn’t get much easier than that, although the shipping runs by plane and boat held many risks, especially when Terry or one of the others had to skip countries. At least at the hotel, and on their own domain, business ran smoothly.

Even the cops had a cut, and often spent their evenings wining and dining in the Tail Wind. They had the pick of the finest rooms and the best women—as long as everybody played by the rules and respected each other.

It was a rare occasion when a room was vacant at the Sea Scape, but if a man with a briefcase and a promise walked in, they always had something available. And if his promises turned to lies then he’d never be seen again.

Terry’s apartment spanned the top floor, a place where he was the top man, for Colton McCoy preferred his estate near Saanich Inlet, a short jaunt out of the city. Despite being the boss’s son, and second in line, the hotel was Terry’s domain. Even his father didn’t question him here.

His Oxford’s clicked on the tiled floor as he made his way to the group of men waiting in a private seating area, hidden by several large palm plants.

“Gentlemen.” He set the briefcase on the side table next to an elderly man. “You’ll find it’s quite potent this time around. Enjoy.”

He accepted a different briefcase and headed for the front desk, smiling as he approached the dayshift receptionist. “Good afternoon, Sal. Any messages for me?” He handed her the second briefcase and she discreetly deposited the leather case into the safe beneath the desk.

Sal looked sassy as ever today, her red locks pinned up in a loose bun with a pencil poking through. Her trademark black-rimmed glasses gave her the look of a naughty librarian.

Everybody loved Sal. Terry trusted her with his life. She was a good woman, and even though he’d nearly started something with her a few years back, he decided to be smart and not touch her. Bad shit happens when you mix work and pleasure.

Sal smiled, her cheeks rosy, lips bright red to match her hair. “No messages today, Sir, but I’m done at six.” Long black lashes—he guessed must be fake—fluttered as she winked.

Terry chuckled. “Good to know.” Sal must be the biggest flirt he’d ever met, but their relationship would never go beyond that. He paid her no further mind and disappeared into the private elevator hidden in a small alcove behind the front desk.

Secret Paradise (Kimani Romance) by Girard, Dara
Desert Heart (The Wolves of Twin Moon Ranch Book 4) by Anna Lowe
Pay Up and Die by Chuck Buda
Hidden (House of Night Novels) by Cast, P. C., Cast, Kristin
The Master of the Day of Judgment by Leo Perutz
Harlequin Rex by Owen Marshall
Tumbling in Time by Wyant, Denise L.
On China by Henry Kissinger
A Crime in the Neighborhood by Suzanne Berne
Preschool Reading Success in Just 5 Minutes a Day by Louise Moore