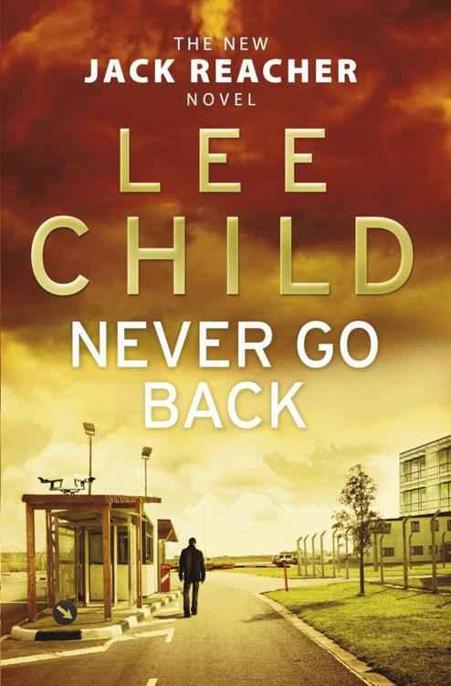 After an epic and interrupted journey all the way from the snows of South Dakota, Jack Reacher has finally made it to Virginia. His destination: a sturdy stone building a short bus ride from Washington DC, the headquarters of his old unit, the 110th MP. It was the closest thing to a home he ever had.

Why? He wants to meet the new commanding officer, Major Susan Turner. He liked her voice on the phone. But the officer sitting behind Reacher’s old desk isn’t a woman. Why is Susan Turner not there?

What Reacher doesn’t expect is what comes next. He himself is in big trouble, accused of a sixteen-year-old homicide. And he certainly doesn’t expect to hear these words: ‘
You’re back in the army, Major. And your ass is mine.
’

Will he be sorry he went back? Or – will someone else?

For my readers,
with my grateful thanks.

EVENTUALLY THEY PUT
Reacher in a car and drove him to a motel a mile away, where the night clerk gave him a room, which had all the features Reacher expected, because he had seen such rooms a thousand times before. There was a raucous through-the-wall heater, which would be too noisy to sleep with, which would save the owner money on electricity. There were low-watt bulbs in all the fixtures, likewise. There was a low-pile carpet that after cleaning would dry in hours, so the room could rent again the same day. Not that the carpet would be cleaned often. It was dark and patterned and ideal for concealing stains. As was the bedspread. No doubt the shower would be weak and strangled, and the towels thin, and the soap small, and the shampoo cheap. The furniture was made of wood, all dark and bruised, and the television set was small and old, and the curtains were grey with grime.

All as expected. Nothing he hadn’t seen a thousand times before.

So before even putting the key in his pocket he turned around and went back out to the lot. The air was cold, and a little damp. The middle of the evening, in the middle of winter, in the northeastern corner of Virginia. The lazy Potomac was not far away. Beyond it in the east D.C.’s glow lit up the clouds. The nation’s capital, where all kinds of things were going on.

The car that had let him out was already driving away. Reacher watched its tail lights grow faint in the mist. After a moment they disappeared completely, and the world went quiet and still. Just for a minute. Then another car showed up, brisk and confident, like it knew where it was going. It turned into the lot. It was a plain sedan, dark in colour. Almost certainly a government vehicle. It aimed for the motel office, but its headlight beams swung across Reacher’s immobile form, and it changed direction, and came straight at him.

Visitors. Purpose unknown, but the news would be either good or bad.

The car stopped parallel with the building, as far in front of Reacher as his room was behind him, leaving him alone in the centre of a space the size of a boxing ring. Two men got out of the car. Despite the chill they were dressed in T-shirts, tight and white, above the kind of athletic pants sprinters peel off seconds before a race. Both men looked more than six feet and two hundred pounds. Smaller than Reacher, but not by much. Both were military. That was clear. Reacher could tell by their haircuts. No civilian barber would be as pragmatic or as brutal. The market wouldn’t allow it.

The guy from the passenger side tracked around the hood and formed up with the driver. The two of them stood there, side by side. Both wore sneakers on their feet, big and white and shapeless. Neither had been in the Middle East recently. No sunburn, no squint lines, no stress and strain in their eyes. Both were young, somewhere south of thirty. Technically Reacher was old enough to be their father. They were NCOs, he thought. Specialists, probably, not sergeants. They didn’t look like sergeants. Not wise enough. The opposite, in fact. They had dull, blank faces.

The guy from the passenger side said, ‘Are you Jack Reacher?’

Which they weren’t, obviously. Reacher knew that. Army lawyers don’t travel in pairs and breathe through their mouths. They were something else. Bad news, not good. In which case immediate action was always the best bet. Easy enough to mime sudden comprehension and an eager approach and a hand raised in welcome, and easy enough to let the eager approach become unstoppable momentum, and to turn the raised hand into a scything blow, elbow into the left-hand guy’s face, hard and downward, followed by a stamp of the right foot, as if killing an imaginary cockroach had been the whole point of the exercise, whereupon the bounce off the stamp would set up the same elbow backhand into the right-hand guy’s throat, one, two, three, smack, stamp, smack, game over.

Easy enough. And always the safest approach. Reacher’s mantra: get your retaliation in first. Especially when outnumbered two to one against guys with youth and energy on their side.

But. He wasn’t sure. Not completely. Not yet. And he couldn’t afford a mistake of that nature. Not then. Not under the circumstances. He was inhibited. He let the moment pass.

He said, ‘So what’s your legal advice?’

‘Conduct unbecoming,’ the guy said. ‘You brought the unit into disrepute. A court martial would hurt us all. So you should get the hell out of town, right now. And you should never come back again.’

‘No one mentioned a court martial.’

‘Not yet. But they will. So don’t stick around for it.’

‘They couldn’t find you before. They won’t find you now. The army doesn’t use skip tracers. And no skip tracer could find you anyway. Not the way you seem to live.’

The guy said, ‘So that’s our legal advice.’

‘You need to do more than note it.’

‘Because we’re offering an incentive.’

‘Every night we find you still here, we’re going to kick your ass.’

‘Starting tonight. So you’ll get the right general idea about what to do.’

Reacher said, ‘You ever bought an electrical appliance?’

‘What’s that got to do with anything?’

‘I saw one once, in a store. It had a yellow label on the back. It said if you messed with it you ran the risk of death or serious injury.’

‘Pretend I’ve got the same kind of label.’

‘We’re not worried about you, old man.’

Old man
. Reacher saw an image of his father in his mind. Somewhere sunny. Okinawa, possibly. Stan Reacher, born in Laconia, New Hampshire, a Marine captain serving in Japan, with a wife and two teenage sons. Reacher and his brother had called him
the old man
, and he had seemed old, even though at that point he must have been ten years younger than Reacher was that night.

‘Turn around,’ Reacher said. ‘Go back wherever you came from. You’re in over your heads.’

‘I used to do this for a living,’ Reacher said. ‘But you know that, right?’

‘I know all the moves,’ Reacher said. ‘I invented some of them.’

Reacher still had his key in his hand. Rule of thumb: don’t attack a guy who just came through a door that locks. A bunch is better, but even a single key makes a pretty good weapon. Socket the head against the palm, poke the shaft out between the index and middle fingers, and you’ve got a fairly decent knuckleduster.

But. They were just dumb kids. No need to get all bent out of shape. No need for torn flesh and broken bones.

Reacher put his key in his pocket.

Their sneakers meant they had no plans to kick him. No one kicks things with soft white athletic shoes. No point. Unless they were aiming to deliver blows with their feet merely for the points value alone. Like one of those martial arts fetishes with a name like something off a Chinese food menu. Tae kwon do, and so on. All very well at the Olympic Games, but hopeless on the street. Lifting your leg like a dog at a hydrant was just begging to get beat. Begging to get tipped over and kicked into unconsciousness.

Did these guys even know that? Were they looking at his own feet? Reacher was wearing a pair of heavy boots. Comfortable, and durable. He had bought them in South Dakota. He planned to keep on wearing them all winter long.

Reacher half turned, and half stepped back, towards his door, a fluid quarter circle, shoulders and all, and like he knew they would the two guys moved towards him, faster than he was moving, off-script and involuntary, ready to grab him.

Reacher kept it going long enough to let their momentum establish, and then he whipped back through the reverse quarter circle towards them, by which time he was moving just as fast as they were, two hundred and fifty pounds about to collide head-on with four hundred, and he kept on twisting and threw a long left hook at the left-hand guy. It caught him as designed, hard on the ear, and the guy’s head snapped sideways and bounced off his partner’s shoulder, by which time Reacher was already throwing a right-hand uppercut under the partner’s chin. It hit like a how-to diagram and the guy’s head went up and back the same way his buddy’s had bounced around, and almost in the same second. Like they were puppets, and the puppeteer had sneezed.

Both of them stayed on their feet. The left-hand guy was wobbling around like a man on a ship, and the right-hand guy was stumbling backward. The left-hand guy was all unstable and up on his heels and his centre mass was open and unprotected. Reacher popped a clubbing right into his solar plexus, hard enough to drive the breath out of him, soft enough not to cause lasting neurological damage. The guy folded up and crouched and hugged his knees. Reacher stepped past him and went after the right-hand guy, who saw him coming and swung a feeble right of his own. Reacher clouted it aside with his left forearm and repeated the clubbing right to the solar plexus.

The guy folded in half, just the same.

After that it was easy enough to nudge them around until they were facing in the right direction, and then to use the flat of his boot sole to shove them towards their car, first one, and then the other. They hit head-on, pretty hard, and they went down flat. They left shallow dents in the door panels. They lay there, gasping, still conscious.