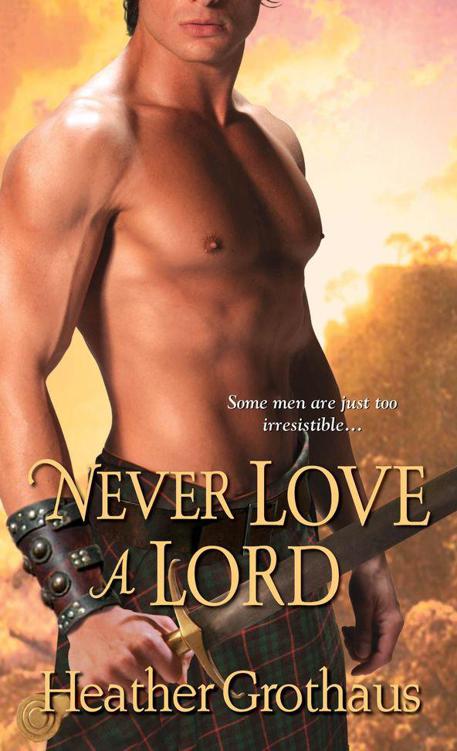 LOVING A LORD
Julian kissed her lightly. “I’m going to make love to you.”
Sybilla cried out and then her hands found his skin and she sought to absorb him with her palms against his chest, his broad, sculpted shoulders. He was so warm, golden, as if he radiated sunshine, his muscles rounded and hard, the goodness of his body dripping like honey onto her skin.
“Love me now,” she demanded.
He leaned close to her face, staring into her eyes. “No,” he growled. “You may be used to getting your way, Sybilla Foxe, but not here, not with me. You asked for this and I will oblige you, lady, but I will do to you what I please, when I want to do it.” He moved his hips again and the tip of him touched her.
He spoke against her lips. “Do you understand me?”
Sybilla let go then, going over the edge, her body grasping for him, her hips arching as she cried, “Yes, Julian . . .”
Books by Heather Grothaus
THE WARRIOR
THE CHAMPION
THE HIGHLANDER
TAMING THE BEAST
NEVER KISS A STRANGER
NEVER SEDUCE A SCOUNDREL
NEVER LOVE A LORD
HIGHLAND BEAST
(with Hannah Howell and Victoria Dahl)
Published by Kensington Publishing Corporation

Tell Me When It Hurts by Whitehead, Christine
Jesse's Girl (Hundred Oaks #6) by Miranda Kenneally
Shella by Andrew Vachss
Kitty's House of Horrors by Carrie Vaughn
JAXON (The Caine Brothers Book 4) by Margaret Madigan
The Lost Child by Julie Myerson
Separate Beds by Elizabeth Buchan
In Search of the Blue Tiger by Robert Power
The Secret 05 Ella and Micha: Infinitely and Always by Jessica Sorensen
The Man Who Cancelled Himself by David Handler