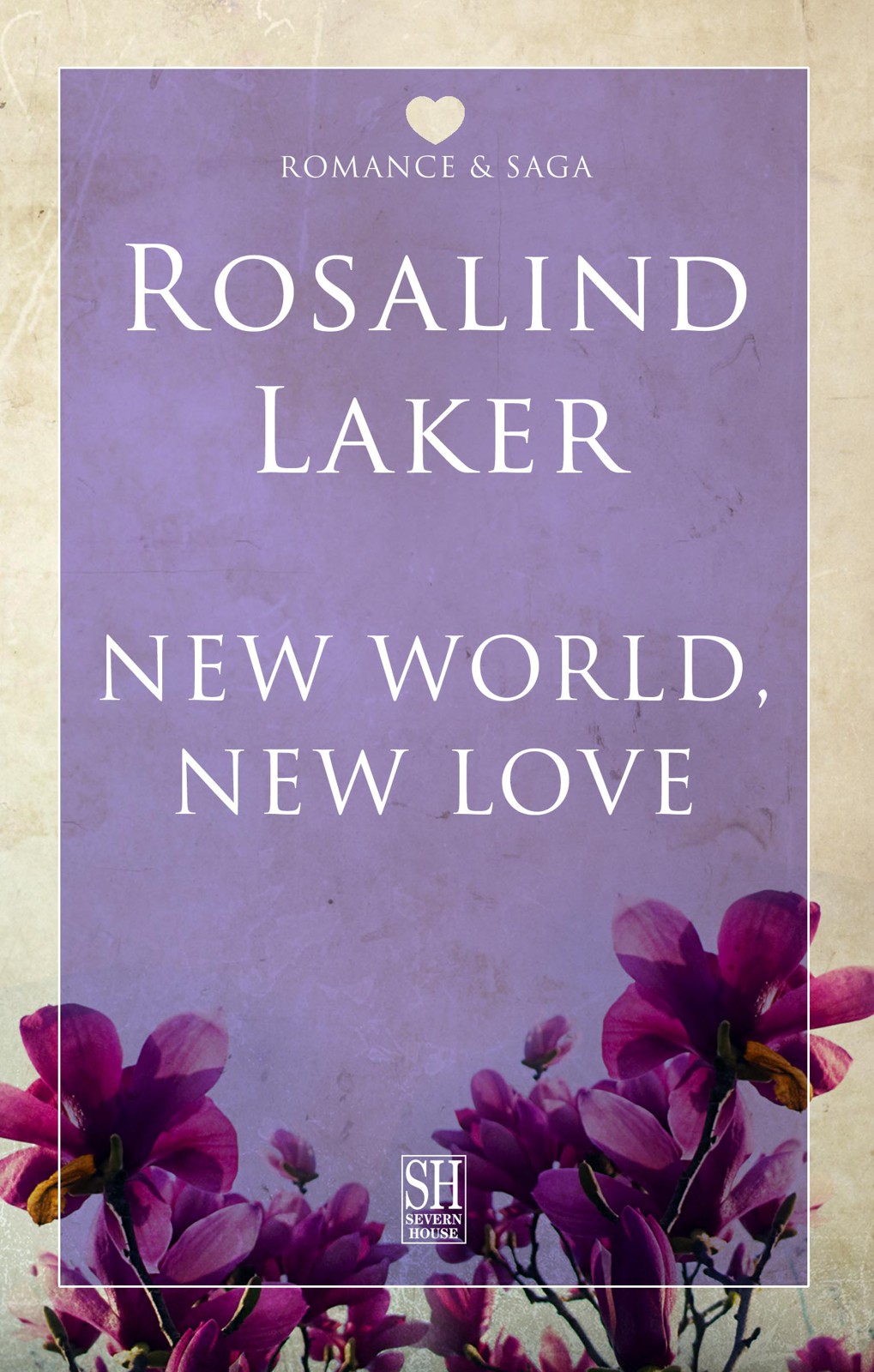 Daniel Lombard falls in love with Louise de Vailly on the day she arrives in New York, a refugee from the French Revolution which has destroyed the lives of Louise, her sister Delphine and so many other French aristocrats. Though unsure of what they will find in the New World, Louise is a brave and determined young woman, not one to wallow in self-pity. Soon she has found work for Delphine and herself in a millinery, where she uses her innate talent and French flair for fashion to make herself indispensable. Though attracted to Daniel, Louise is equally determined that she will remain independent, not tied to any man. Fatefully, she has made that mistake in the past...

TO LOVE A STRANGER

First published in Great Britain 2002 by

First published in the USA 2003 by

The right of Rosalind Laker to be identified as the author of this work has been asserted in accordance with the Copyright, Designs & Patents Act 1988.

To Mary and Richard for friendship
and all the laughter

I
t was a crisp and golden New York morning in early spring. Daniel Lombard would always remember it as the day he saw the Frenchwoman for the first time. He had come out of the mercantile office on an East River wharf, his business completed, and was lingering on the steps when he saw her.

Maybe it was her wide-brimmed yellow hat, bright as a little sun, which had first caught his eye and caused him to focus on the curiously haunting beauty of her oval face. She was among the passengers clustered along the bulwark of the newly arrived tall-masted American ship, the
Ocean Maid
, all taking in the busy scene below while waiting to disembark.

There was much to see. Wagons and carts and carriages coming and going, stevedores rolling hogsheads of wine, shifting cargo or loading the noisy, clanking cranes. Everywhere passengers were arriving and departing, many trailing porters in their wake. Prevailing over all was that peculiar dockside odour blended of tarry ropes, spices from the Dutch East Indies, stale fish, sacks of corn and salt-encrusted timbers.

Earlier, through the window of the mercantile office, Daniel had seen the customs officers and other officials going aboard. Being an importer of silks, he was always interested in ships, and he had asked a clerk where the
Ocean Maid
had been on her voyage.

‘She’s home at last after lying in embargo for several months with other of our ships at the French port of Bordeaux, Mr Lombard,’ the young man had replied. ‘All because of an upstart ruling by that unpredictable Revolutionary government there! Now at last Captain Hooper has been allowed to return home and has brought with him an assortment of people escaping the guillotine. That Revolution is nothing more than a bloodbath now. New York is flooded with these émigrés. Some have started up their own businesses and they even print their own newspaper in French.’

Daniel knew from his sister’s letters that it was the same in Charleston and he shared her compassion for these unfortunate people. After all, as she had written, their own French Huguenot ancestors had been forced to flee to the New World to escape religious persecution little more than a century ago and now for another reason a similar desperate flight from France was happening all over again.

‘Are there many of these émigrés in Boston where you live, sir?’ the clerk asked.

‘Not compared with the number of those arriving here.’

‘You’ll soon see a crowd collect,’ the clerk continued. ‘As word spreads that there’s a ship in from France, émigrés already here come rushing to the quayside in the hope of finding people they know on board or, at the very least, news of family and friends.’

The clerk’s words had proved right. Quite a little crowd was gathering on the wharf, all shouting up to those on board, and more were clustered around the foot of the gangway to question those stepping ashore. Daniel strolled forward, tall and broad-shouldered, his gaze still fixed on the Frenchwoman, and came to a halt at the back of the crowd.

He was a striking-looking man, not conventionally handsome, but his face was strong-featured, the nose chiselled, the black brows straight over sharply intelligent grey eyes, and he had a wide, well-shaped mouth that was warmly sensual. Twenty-eight years old, he had the easy, self-assured air that comes from success and position. Having long been exasperated by the fashion of wigs and powdered hair, he wore his black hair groomed in the latest short, brushed-forward style. He also favoured the new, highly fashionable slim-cut coat worn with tight doeskin pantaloons and high polished boots instead of knee breeches and buckled shoes, which fashionable men had reserved for evening attire. His top hat had the high, narrowing crown and the slightly curving brim that made all other headgear appear thoroughly outdated.

On board, Louise de Vailly was unaware of being studied. Holding her hat brim between her thumb and index finger, she shook her head regretfully at those calling up to her, being unable to give any of them the information they required. In the crowd some of the women were weeping in disappointment. Then Louise felt an impatient tug on her sleeve from her fifteen-year-old sister.

‘Come along, Louise. I want to get off this horrible ship and you’re missing our turn at the gangway.’

‘Yes, I’ll be glad to get ashore too, Delphine.’

It had been a hard voyage lasting the customary six weeks with overcrowded quarters and extremely rough weather. There had also been very little food, which had been no fault of the captain, for the Revolution had resulted in widespread famine in France and he had had great difficulty in getting any supplies. Louise picked up her bundle of belongings, which was all she had been able to bring away with her, and followed her sister, similarly burdened, who set off ahead of her down the gangway.

Daniel had a better view of the newcomer now. She had the finely moulded facial bones of the well-bred Frenchwoman, her complexion devoid of the thick cosmetics that many of the aristocratic émigrés, men and women, continued to use as if still at the Palace of Versailles. Instead her skin had a healthy tint from the ocean air and seemed to glow. Her green eyes were large and long-lashed and her luxuriant hair a rich chestnut. She held her head high, her chin tilted, and he had the impression that whatever hardships and terrors she had endured in the past her courage was not diminished and she was prepared to face whatever this new country held in store for her.

Around her long throat was a scarlet ribbon, symbolic of the cut made by the guillotine’s blade. He had seen that worn by other émigrés, both as a sign of having been bereaved by the guillotine and as a mark of respect for the victims. As her gown and cloak were black and in spite of the cheerful sunshine colour of her hat, which she had tried to sober down with black ribbons, he judged her loss to have been personal.

Louise was halfway down the gangway when the heel of her shoe slipped and she grabbed at the side-rope to steady herself. Instantly her hat, released from her hold, was snatched away by the wind and went sailing off into the air.

‘Oh!’ She made a vain attempt to catch it. Then to her relief she saw it make a full circuit over the water and with a swirl of ribbons land some distance away on the cobbles of the wharf. An urchin ran to snatch it up just before the wheels of a wagon rolled over it.

She stepped ashore to a barrage of fresh questions from those waiting, some delivered in a hostile manner from fellow countrymen and women not of the nobility, but who could tell that she was from her speech. She knew only too well from similar encounters on board how angry and resentful many hard-working, previously loyal people had become towards the aristocracy, whom they blamed rightly but indiscriminately for being the cause of the Revolution. Privately she sympathized with them. They had had to flee for their lives too, and she knew herself how agonizing it was to leave one’s homeland when it was not by choice.

It took time before she was able to make her way through to where her sister was waiting for her, the errant hat in hand. There was no sign of the boy.

‘Here you are, Louise.’ Delphine, whose own pale straw hat had been fastened all the time by a flattering bow under her chin, handed it over to her. ‘The little thief was about to run off with it, but that gentleman stopped him.’ She indicated Daniel with a smiling nod. He had drawn away, but had paused to look back at them. ‘He speaks excellent French and we had a useful little chat. He warned me that we should watch out for thieves and charlatans of every kind.’

Louise inclined her head towards him. ‘Thank you, sir,’ she said appreciatively in English.

‘My pleasure, ma’am.’ His voice was deep and articulate.

Briefly she felt herself held by the intensity of his penetrating gaze before he raised his grey top hat and continued on his way.

She turned back to her sister and spoke briskly. ‘That should be a good omen! A kind act from an American citizen as soon as we land. Now let’s go.’

After putting on her hat again, she heaved her bundle more securely on to her arm and they set off along the busy wharf. Ahead a cart was being stacked with bulging white canvas sacks, but suddenly some began to slide off again. There were shouts of alarm as one burst asunder on the cobbles, spilling nutmegs everywhere in a wafting wave of their fragrance. The carter and stevedores and bystanders rushed to gather them up, for their value on the market was tremendous and quite a few went unseen into pockets. The sisters had to skip and skirt the rolling nutmegs before they reached some hackney carriages. Most had already been taken and were on the move, but they managed to secure one just in time.