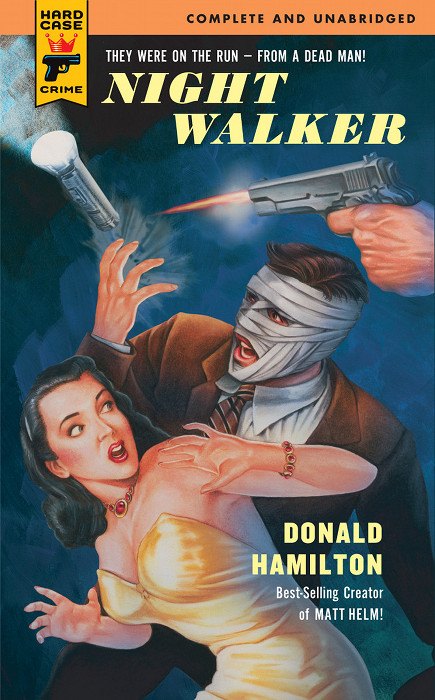 Raves For the Work of DONALD HAMILTON!

“Hamilton is a pure storyteller of the first rank... masterly, dark, and constantly surprising.”

“His stories are as compelling and probably as close to the sordid truth of espionage as any now being told.”

“His capacity to divert is spectacular.”

“A yarn that keeps moving at an irresistible pace... written in a style that builds suspense upon suspense. This man is good!”

“If you have half a dozen thrillers at hand and one is by Donald Hamilton, you can either grab it at once or save it for dessert.”

“Never fails to pull off a first-rate adventure.”

“Think it over. There’s also the money.”

Young said, “I wouldn’t touch a cent of that bastard’s—”

Elizabeth smiled. “You’ve taken his name and his home, you’ve been eating his food; you’ve kissed his wife. Why get high-minded about the money?”

Young looked at her; and she waited. The light from the open window made her look young and expectant and quite lovely. It occurred to him, rather shockingly, that he now knew this girl better than he knew any other person in the world.

You could put it nicely, he thought, and say that they seemed to get along well together because they suited each other; or you could make it ugly and say that they damn well had better get along because they knew too much about each other not to. Either way, they got along, and he knew suddenly that they always would, because neither of them would ever expect too much of the other. They would always make allowances. Both of them knew that there was not a great deal to expect.

He said, looking up at her, “You don’t know what I look like. You’ve never seen my face.”

“I’ll like it,” she said. “If I don’t, I can always — close my eyes, like this.” Smiling, she bent down and kissed him full on the mouth.

He looked at the girl standing above him, and thought,
Why not?

He ran after the twin taillights as a car finally swerved to the side of the highway in response to his thumb signal. The driver pushed the door open for him, and sent the big coupé away again with a rush the moment he was inside. David Young found space for his bag between his feet and settled back against the cushions to watch the highway come reeling into the headlights with swiftly increasing speed. He did not, these days, like fast driving, and as the big car lunged into a curve he could not help bracing himself in the seat, while through his mind flashed again, unwanted, memory of disaster that had nothing to do with automobiles.

The driver beside him spoke. “Kind of late at night to be hitchhiking, Lieutenant.”

“I’m supposed to report at Norfolk in the morning,” Young said. “Thanks for stopping. That gravel shoulder gets hard on the feet.”

“Forget it,” the man said. “Nobody minds helping out a guy who looks like he’s willing to try hoofing it if he has to. It’s these damn helpless jerks with two suitcases
and a portable radio —” He spat out the open window beside him — a dim, husky figure in a light hat and topcoat. There was not enough illumination for Young to try to guess his age; but in spite of his rough way of speaking he had a well-to-do look about him that matched the car he was driving. Young looked away, remembering that even when you were in uniform people were always a little uneasy about picking you up along the road, particularly at night; there was no point in worrying his benefactor by seeming in a hurry to look him over. The man spoke again: “Been on leave, Lieutenant?”

“No.” Young could not help making the answer short. “Reporting for duty.”

“Tough,” the man said. He took his eyes from the road briefly and seemed to study Young’s appearance, his eyes finally reading the ribbons on the Lieutenant’s uniform blouse; then he checked the car expertly as it began to stray. “Looks like you saw some action in the last one, Lieutenant. Pacific theater, eh? Wounded, too.” He glanced back at the ribbons. One caught his eye and he whistled softly as he returned his attention to the road. “Got one of the big ones, eh? Don’t see too many of those around.” He drove for a while in silence, perhaps waiting for Young to respond to this. When his passenger did not speak,
the man went on: “You’d think this time they’d pick on the boys who sat the last one out, like yours truly. I suppose you had yourself all fixed up with a job and family, too, like a lot of the other guys they’re pulling back in.”

Young shook his head. “No. I was still going to school under the G.I. bill, as a matter of fact. Graduate work in engineering. It looks as if I’ll be nursing a long gray beard when I finally get that degree. But no family, thank God.”

“Just the same, it’s tough,” the man said. He added slyly, “You’d think that, yanking you back that way, the Navy would at least advance you enough for train fare.”

Young flushed slightly. “They did,” he said. “Uniforms and transportation both. Only, well, I got a little high the other night—”

The driver chuckled. “I thought you looked kind of like the tail of a rough weekend. Celebrating, eh?”

He was glad when the man beside him did not ask for details; he did not like to think of how drunk he had been.

He leaned back against the seat wearily, removing his cap so that he could lie back comfortably. Presently he found himself looking at the cap in his hands; it had a raw and new look that did not appeal to him. The gold lace was very bright; the device
shone silvery against its dark background. It might, he reflected distastefully, have been the cap of a baby ensign fresh from the trade school on the Severn that was located not so far from here. He could remember a really well-broken-in cap that he had lost on an occasion he preferred not to think about; and one not quite so salty-looking, but still quite presentably dilapidated, that he had given away. He had got rid of everything when they released him to inactive duty in 1946; he’d had his war, he remembered thinking, somebody else could take the next one. He had picked a school inland where water was something you used for washing, and for drinking if you couldn’t do better. He had not stepped aboard as much as a rowboat in seven years.

The headlights picked out the signs announcing the approach of
Rogerstown, Maryland, Population 7000, Speed Limit 25, Enforced.
The marked slowing of the car as they approached the darkened business area made Young glance at the driver, who had not impressed him as a person who took speed limits seriously.

“I turn off up ahead, Lieutenant,” the man said. “Sorry I can’t take you any farther. Hope you make out all right.”

Young concealed his disappointment. “Sure,” he said. “Thanks.”

He watched the intersection approach, and lifted
his bag from between his feet, preparing to get out of the car when it should stop. Then the man glanced at him, seemed to hesitate nervously, and motioned to him to sit still, pressing down the gas pedal so that the coupé shot ahead again. The signposts and the stop light — dark so late at night — flashed past; then the town also was behind them. The driver laughed at Young’s questioning frown.

“Hell, I’ll run you into Washington, Lieutenant. You’ll grow roots like a tree trying to catch a ride out here in the middle of the night.” He reached into his hip pocket and brought out a wallet, selected a bill from the proper compartment, one-handed, and held it out to Young. When Young hesitated, he said with a show of irritation, “Ah, take it! I’ll drop you at the bus station and this’ll get you to Norfolk. You can send it back when you get paid.”

Anne Douglas by The Handkerchief Tree
Tahoe Blues by Lane, Aubree
Layla by E. L. Todd
Hair of the Dog by Laurien Berenson
After the Moon Rises by Bentley, Karilyn
Mist Warrior by Kathryn Loch
Fool Me Twice by Meredith Duran
Grand Master by Buffa, D.W.
This Too Shall Pass by Jettie Woodruff
The Avion My Uncle Flew by Cyrus Fisher