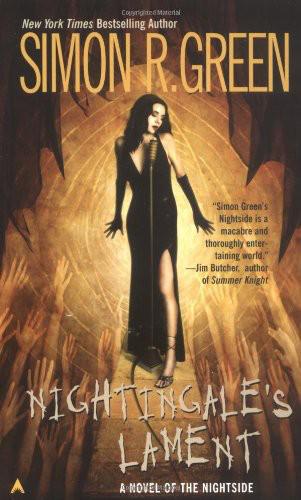 My name is John Taylor. I've made that a name to be respected and feared, but it's also made me a target my whole life.

I operate as a private eye, in a world where gods and monsters are real. The Nightside: the sick, secret magical heart of London. A place where dreams come true, whether you want them to or not. It's not easy to find a way in, and it can be even harder to find a way out.

I can find anything, solve any mystery. Except the answers to the dark and deadly secrets of my own past.

My name is John Taylor. And if you've come looking for me, either you 're in trouble, or you 're about to be.

T
here are all kinds of Powers running loose in the Nightside, but its power sources have to be rather more reliable, as well as completely divorced from outside interference. Someone's got to pump out the electricity to keep all that hot neon burning. The Nightside, being a city within a city, draws its energies from many sources—some of them illegal, some of them unnatural. Power is generated by blood sacrifices and imprisoned godlings, gestalt minds and tiny black holes held captive inside stasis fields. And there are other sources, so vast and awful, so alien and unutterably
other,
that just to glimpse their secret workings would drive a man insane. Not that anyone cares about such things in the Nightside, not as long as the lights are bright and the trains keep running. But the only really dependable source for
electricity
used to be the futuristic power plant of Prometheus Inc. Magic may be more flashy, but there's always been as much super-science as sorcery in the Nightside.

Prometheus Inc. was a fairly recent success story. Not quite six years old, it had a reputation for dependability and savagely undercutting prices, which made it the company that supplied some twelve percent of the Nightside's electricity. So the recent sudden outbreak of sabotage and destruction inside the closely guarded power plant could not be allowed to continue. Walker made that very clear. Walker represents the Authorities, the shadowy people who run things here, inasmuch as anyone does, or can. He sends the occasional job my way, when it suits him, because I am quiet, dependable, and entirely expendable.

I stood in the shadows at the end of the street, quietly studying the hulking edifice that was Prometheus Inc. It wasn't much to look at - just another great tower block of glass and steel. The top floors were offices, administration and the like. Middle floors were laboratories, for research and development. And the bottom floor was public relations. The power plant itself, that modern wonder of efficiency and incredible output, was supposedly somewhere underground. I say supposedly, because as far as I knew, only a handful of people had ever seen it. The whole thing was automated, run from a single control centre, and even after six years no-one had any idea of what it was or how it worked. And it's not easy, keeping secrets in the Nightside.

The whole Prometheus Inc. success story had happened while I was away, trying - and failing - to live an ordinary life in the ordinary world. Now I was back, and I was quite keen to see what was being hidden under the surface of Prometheus Inc. I like knowing things that no-one else does. It's helped me keep alive, down the years. I strolled out of the shadows and headed for the office building. There was a small army of security men and rent-a-cops surrounding the place, and those nearest the main door lifted their heads and paid attention as they spotted me approaching. An awful lot of guns zeroed in on me, and the sound of safeties clicking off was almost deafening. If I'd been anyone else, I might have been worried.

I came to a halt before the main door and smiled at the rent-a-cops arrayed before me, in their wonderfully striking uniforms of midnight blue with silver piping. I nodded to the officer in charge, a tall and somewhat overweight man with cold, careful eyes. He held his ground, and his gaze didn't waver, though behind him we could both hear his men whispering my name. Some of them crossed themselves or made ancient warding signs. I let my smile widen just a little, because I could see it upset them. Ever since I tracked down the Unholy Grail and stood off two armies of angels to do it, my reputation had been going through the roof. Mostly nonsense, of course, but I did nothing to discourage the rumours, particularly the nasty ones. Nothing like a good - or more properly speaking a bad - reputation to keep the flies off.

"I'm supposed to ask for identification," said the officer. "And shoot anyone who isn't on the approved list."

The officer relaxed a little. "First good news I've had all night. Hello, Taylor. I'm actually glad to see you. This whole business has my people seriously spooked."

"Has anyone been killed?" I asked, frowning. "I understood this was just a sabotage case."

"No deaths as yet, but a hell of a lot of casualties." The officer scowled. "Whoever's tearing this place apart doesn't give a damn about anyone who gets in his way. I've lost forty of my people in the last three nights, and I still haven't got a clue as to who's behind it all. No-one ever sees anything, until it's too late. I've had this place closed up tighter than a duck's arse, and still the bastard keeps getting in."

"Inside job?" I asked, to show I was paying attention.

"That was my first thought, but there hasn't been anyone in there for a week. The boss sent them all home when the problems started. He's the only one left in the building. I ran the usual security checks on the staff anyway, just in case, but nothing showed up. Most of them haven't been around long enough to work up a serious grudge."

"So what's freaking your men?" I asked quietly. "If they were any more on edge, they'd be shooting each other."

The officer snorted. "I told you. No-one ever sees
anything.
I've got saturation coverage around the building, CCTV inside, and infrared and motion sensors working. And whoever it is comes and goes without setting off any of them."

"There are a lot of things in the Nightside that come and go as they please," I pointed out.

"Don't I know it. But this is supposed to be a high-tech, low-magic area. If any heavy-duty magic-user had appeared here, he'd have set off all kinds of alarms. Whoever or whatever's trying to shut this place down, it's outside anything I've ever experienced, in science or magic."

I nodded easily, doing my best to exude casual confidence. "That's why they sent for me. Because I find the answers other people can't. See you later."

I stepped past the officer and headed for the main door, only to stop abruptly as one of the rent-a-cops moved suddenly forward to block my way. He was a big lad, with muscles on his muscles, and his huge hands made the semi-automatic in his grasp look like a toy. He scowled at me in what he obviously imagined was an intimidating way.

"Everyone gets frisked for guns," he snapped. "That's the rules. No exceptions. Even for jumped-up ambulance chasers like you, Taylor."

The officer started to say something, but I stopped him with a quick gesture. The day I couldn't deal with a constipated rent-a-cop, I'd retire. I gave him my best nasty smile.

"I don't use guns. Never have. They have too many limitations."

I slowly raised my hands, opened them, and the rent-a-cop's eyes widened as a steady stream of bullets fell from my hands to bounce and rattle on the ground at his feet.

"Your gun is empty," I said. "Now get out of my way before I decide to do something unpleasantly similar to your insides."

He pulled the trigger anyway, and made a small unhappy sound in the back of his throat when nothing happened. He swallowed hard and stepped back. I walked past him as though he didn't exist. I could hear the officer chewing him out as I passed through the heavy main door into the lobby beyond.

I strolled into the luxurious reception area as though I owned the place, but the effect was wasted, because there was no-one there. I heard electronic locks closing behind me. Someone knew I was there. I looked around the lobby and quickly spotted the security cameras tucked away in the ceiling corners. All the little red lights were on, so I just stood there and let the cameras get a good look at me. I thought I looked pretty good. My white trench coat was actually a little cleaner than usual, and I was almost sure I'd remembered to shave. Appearances can be so important. There was a brief burst of static from an unseen speaker, then a familiar voice whispered in the great empty lobby.

"John, I'm so glad you're here. Come on through to the manager's office and join me. Take the blue door at the end of the lobby, and follow the arrows. Don't go wandering. I've got booby-traps set up everywhere. And watch your back. We never know when the saboteur's going to strike next."

I passed through the blue door and followed the glowing arrows that appeared on the wall beyond. After the luxurious reception lobby, the inner workings of Prometheus Inc. turned out to be decidedly functional. Narrow corridors with bare walls, numbered doors, and scuffed carpeting. It was all very quiet, as though the whole building was tense, waiting for something bad to happen. The arrows finally led me to a door with the Prometheus company logo on it, and there waiting to greet me was the manager-owner himself, Vincent Kraemer.

He nodded and smiled and shook my hand, but it was clear his thoughts were somewhere else. The man was seriously worried, and it showed. He ushered me into his office, looked quickly down the corridor, and shut and locked the door. He waved me to the visitor's chair and seated himself behind the magnificent mahogany desk. The office looked comfortable, lived in. Nice prints on the walls, deep deep carpet, and a high-tech drinks cabinet in the corner. All the usual signs of success. But the desk top was covered in papers that had overflowed and almost buried the In and Out trays, and one whole wall of the office was covered in CCTV monitor screens, showing ever-shifting views of the power plant interior. I studied them for a while, to show I was taking an interest, but it was all just machinery to me. I couldn't tell a turbine from a teapot, unless one of them had a tea cosy on it. Everything seemed to be working okay for the moment, and the walkways were deserted. I turned my attention back to the manager, and he flashed me another preoccupied smile.

I knew him vaguely, from several years back. Vincent Kraemer was one of those people who was always running around like a mad thing, trying to put farfetched and precarious deals into motion, chasing after the one Big Score that would make him horribly wealthy. He finally made it, with Prometheus Inc. Vincent was tall, buff, immaculately dressed, with a prematurely lined face and no hair left to speak of. His suit probably cost more than I used to make in a year.

"Good to see you again, John." His voice was steady, cultivated, and artificially calm. "Been hearing interesting things about you since you got back."