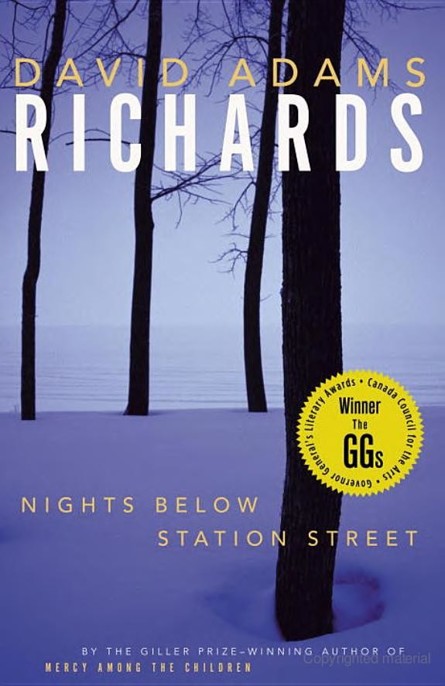 ACCLAIM FOR
Nights Below Station Street

“One of Richards’s best works. … His voice is one of the most powerful and necessary to be found in Canadian fiction today.”

“… the book must be honored for characters who brazenly step right off the pages into the reader’s hearts.”

“Richards [is] a unique and original voice in Canadian literature.”

“David Adams Richards has, like Steinbeck and Faulkner, gained a solid literary reputation while confining his novels to a people and place he knows really well. …”

“Richards is a very good writer who can give us with superb precision the feel and atmosphere of his time and place. …”

“He knows how to use his powers of observation and sympathy to reveal his characters’ inner lives. …”

“He is required reading for anyone who believes life is far too serious to be treated with solemnity.”

“Everyone wants to change the world; but no one will change themselves.”

“There is blood on their lips, you fight back, and it’s you they blame.”

It was the Christmas of 1972. A spruce tree was decorated in the corner of their living room against the pine-board wall. There was a smell of evening. Their house was below Station Street and down beyond the hospital.

Adele said she never got anything. She went to bed before Midnight Mass, and then on Christmas morning got into a fight with her father and refused to open any of her presents, and instead sat on the stairs in her housecoat complaining about bad nerves and upsetting feelings.

Joe was not drinking for the first Christmas in years. But Adele said that he would probably ruin it some other way, or in some other fashion. She was waiting for him to go for the bottle any second. He was a large heavy-set man, with a clumsy stride. He went out onto the street, a street that overlooked the river, near the rocks; and while Rita watched from an upstairs window, leaning back as if frightened that he’d see her. He paced back and forth. And there was a whistle from the mill.

Rita liked to drink, but because Joe was not drinking she only had a few glasses of wine. And she was nervous too. She did not know why her husband was staying sober. But
she was afraid that she was going to do something or say something to cause him to drink. She did not know what she would do or say – only she was sure she would. The last time he got drunk he had lit his pants on fire, falling asleep on the couch with a cigarette burning. Adele had woken up and, screaming, had run to the bathtub to get a plastic bucket filled with water. But she did not throw it on his pants. Instead she threw it at him, and it hit him in the face. This happened two months ago, on Hallowe’en.

Adele was already bored and depressed. She wanted to go back to school. When they brought her her presents, with her little sister Milly begging her to open them, she kicked at them with her toes, which she was busy painting.

Everyone else got a telephone in their room and she had been hinting to Rita to get her a telephone. But Rita had gypped her. Adele screeched at the television for getting blurry and then went into her room. Even the music from the radio depressed her at this moment.

Adele would ignore Joe as she went about the house, and Joe would take out a cigarette and light it as she went by, nodding to her now and then. Once when he nodded to her she flew into him again and said that yes she was quite familiar with him, she already knew who he was. Then she smirked. And then she turned on the balls of her feet and marched off triumphantly upstairs.

Ralphie came to the house and brought Adele her presents; he was tall with red hair. He had started going with her that fall, when she was fifteen, and she already had pictures of him in the house, two in her bedroom, one in the living room, and one more on the small dark paint
chipped commode in the bathroom, which she wouldn’t allow anyone to touch.

He stood at the door in a brand new pair of boots. His boots looked ridiculously new to her and he nodded seriously at whatever Joe or Rita said.

The first time Ralphie got to talk to Joe (this was while Joe was still drinking), Adele had spoken in a rush: “This is Joe – here – he’s my father – my mother’s out earning our keep selling Amway.” Then she turned to him as Joe came forward to shake his hand. Ralphie had been hearing of Joe Walsh since he had been a little boy. He had heard that he hurt his back, and though he could still be called strong, and could still be capable of tremendous strength, he was acting at about half of what he had once been. Everyone in town had told him this also.

“We want to be alone, Joe – go in the other room,” she said and then she began to walk about the kitchen table wiping it up.

Joe smiled slightly and he went into the other room. But as soon as he did, Adele had nothing more to say, became absolutely silent, and stared at the clock. Every time Ralphie spoke she would nod and look up at the clock, as if to say: “God this visit sure is taking a long time.”

Then Joe came out a few minutes later with some pictures in his hand. “Here,” he said to Ralphie, “I have some pictures I’d like you to see of my camp at Brookwall.”

“Well, he doesn’t want to see them,” Adele said, still looking up at the clock. When Joe went to hand them to Ralphie, Adele became so upset, so angry that she grabbed the pictures out of his hand and they fell and scattered over the floor.

“There,” she said. “Well, now look at what you’ve done – and you’ve always done things just like that –”

But then she jumped off the seat and began to crawl about the floor. Joe stood in his sock feet looking down at her. And then her temper flared:

“You haven’t done any exercise for your back but then Wally Johnston wants you to lift an engine and you’re over at the house at midnight covered in shit and wrestling with a goddamn truck engine –
ha ha – ha ha – ha ha ha
, your old back might just fall off some day. And then Mom will have to keep shitty diapers for the rest of her life – but you won’t mind that because it will give you a chance to play pinball – which is all you seem to want to play lately.”

Ralphie was standing against the kitchen sink with his eyes lowered.

“Ha,” Adele said flaring up. “Rude – why don’t ya slap my cheeks off or stick a fork in my bum like ya did when ya were drunk. If it weren’t fer Mom we’d all be on the welfare – the whole herd of us would be downtown in the office – like Jesus Frenchmen.”

“I might slap ya,” Joe said. He looked worried and curiously at Ralphie for a moment – as if at that moment he had no idea what Ralphie was doing in the house or why he was listening to the conversation.

“Well – and even these pictures Mom don’t want you to maul and put a gross amount of fingerprints all over – and I don’t care,” she finished up, screaming.

Then suddenly she stood, handed the pictures to him, and smirked. She had two big barrettes in her hair, both of butterflies, which looked as if they had just lighted there and were about to carry her away.

Then she sat down again and as soon as Joe went out of
the room she hauled a cigarette out of the top pocket of her blouse and got Ralphie to light it.

She smoked her cigarette quickly with jerking movements of her thin right hand, snapping gum, and glancing towards the other room to see if he was coming back out.

“I’m not real sure,” Ralphie said.

“Pretty fucking grim around this place,” Adele said, her mouth twisted unnaturally suddenly. “And I’m not the kind a girl to swear.”

Then she smiled, butted her cigarette, and blinked quickly as if her eyelashes were stuck.

Adele now led Ralphie about the house. As they moved from the kitchen to the living room, she held onto his hand and looked angrily at everyone, especially at her little sister Milly, who had run over to him as soon as he came into the house – as she did with every new person that came in.

undying legion 01 - unbound man by karlov, matt
Highland Spitfire by Mary Wine
Destiny of Coins by Aiden James
Sunshine by T.C. McCarthy
A Fever in the Heart: And Other True Cases by Ann Rule
Poorhouse Fair by John Updike
Quarantine: The Loners by Lex Thomas
The End of Vandalism by Tom Drury
NOCB 070 - Time Raiders - Delilah Devlin - The Warrior's Touch by Nocturne
Now You See Me by Sharon Bolton