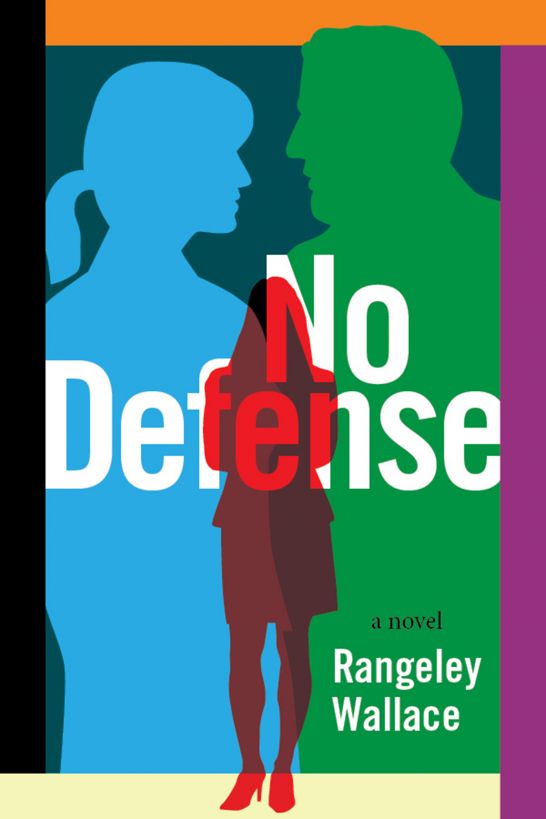 NO DEFENSE
by Rangeley Wallace

Published by Bev Editions at Smashwords

Lines from “The Ballad of the White Horse” by
G. K. Chesterton appear courtesy of Ignatius Press.

This ebook is
licensed for your personal enjoyment only. This ebook may not be
re-sold or given away to other people. If you would like to share
this book with another person, please purchase an additional copy
for each other person. If you're reading this book and did not
purchase it, or it was not purchased for your use only, then please
return to Smashwords.com and purchase your own copy. Thank you for
respecting the hard work of this author.

The thing on the blind side of the
heart,
On the wrong side of the door,
The green plant groweth, menacing
Almighty lovers in the spring;
There is always a forgotten thing,
And love is not secure.

I am especially grateful to my editor, Bob
Wyatt, for his belief in my work and his invaluable contributions
to this book, and my friend and agent, Leslie Breed, for her
loyalty and tireless efforts on my behalf I am also indebted to
Joyce Renwick for her insightful suggestions and guidance, and Ruth
Noble Groom for her help and encouragement. Special thanks to Holly
Wallace and William Nealy for their moral and technical support.
Finally, thanks to my husband, Jim Denvir, whose patience and hard
work have made this book possible and whose comments have made it
better, and my children, Daniel, Jamie, and Emma for teaching me to
take risks and for their love.

Sample Chapter of
Things are Going to Slide
by Rangeley Wallace

I hurried down the wide marble hallway of the
new county courthouse planned by and named after my father; the
clicking of my high heels on the marble floor echoed behind me,
skipping a beat when I hesitated in front of the massive wooden
doors to Courtroom G. I took a deep breath, bracing myself, then I
firmly grasped the brass handle on the right and pulled the door
open.

Once inside the spacious courtroom, I tried
to stare straight ahead and ignore the blur of people watching me.
I willed myself not to bite my lip, a nervous habit I’d had as long
as I could remember, one that had been mentioned by some reporter
in one of the articles about my family after my father, Newell
Hagerdorn, the mayor of Tallagumsa, Alabama, and the leading
candidate for governor, was indicted for murder.

The courtroom spectators seemed to be seated
according to their sympathies, reminding me suddenly and absurdly
of a wedding celebration where the bride’s family and friends take
the left section and the groom’s family and friends the right. The
organizing principles here, however, were my father and the crime
with which he was charged.

The first three rows on the right side
behind the prosecutor’s table were occupied by the dead boys’
mothers and their supporters, a rectangle of black in a sea of
white.

Members of my own family-my mother, Gladys,
my sister, Jane, and her husband, Buck, as well as my husband,
Eddie-sat just one row back from that group.

As far as I could tell, the rest of that
section was filled with reporters, many of whom I could now
identify by name. Ben Gainey, from the
Washington Star
, was
there, of course. This was, after all, his news story, his coup,
the kind of story young reporters dream about. Since reopening the
fifteen-year-old unsolved civil rights murders and marshaling piece
by piece the evidence that ultimately led to my father’s
indictment, Ben Gainey had ascended to the now familiar role of
reporter as hero.

It was not enough that Ben had rooted around
in the past that had been buried with our town’s infamous crime and
come up with my father. Far worse-as more than a few news articles
had pointed out-was that my relationship with Ben, my involvement
in his work, and my participation in his investigation had been
critical to his success.

And so I suffered under the unbearable
weight of my own guilt as I approached the defense table, kissed my
father good morning, and wished him good luck. Ever calm and cool,
he reached for and patted my trembling hand. The sharp contrast
between his composure and my distress suggested I was the one on
trial here, not him.

I sat down in the first row of seats behind
the railing separating my father and his lawyer from the crowd.

A few people reached over the back of the
pewlike bench and patted my shoulder, offering comfort.

Someone behind me whispered, “We’re with
you, LuAnn. Don’t worry, hon.”

I turned around and forced a small smile.
Members of the sheriff’s department, the mayor’s office, and our
many other champions and friends filled the rows on the defense
side of the courtroom.

To my disgust, Lucas Terry, the imperial
wizard of the Knights of the Ku Klux Klan, and some of his deputies
sat in the back row. At Terry’s wave, I felt my face redden and I
quickly turned away.

The night before, after finally getting my
six-month-old twin boys to sleep-no easy task, as they were
teething—I’d fallen into bed exhausted but sleepless at the
prospect of what the next day might bring. I started to cry. I’d
cried plenty lately but had tried hard not to fall apart in front
of my four-year-old daughter, Jessie. She must have heard me,
though, because she appeared in the bedroom doorway wearing the
Star Wars
T-shirt my husband, Eddie, had forgotten when he
moved out.

The T-shirt was a ridiculous fit, so long
the hem dragged the ground with each step and so wide the short
sleeves reached her wrists. Still she’d insisted on sleeping in the
shirt every night since her father left.

Jessie stood still and watched me cry. Her
golden brown hair fell around her shoulders, and her green eyes
were open wide, filled not so much with fear as curiosity.

“Take a deep breath,” my daughter ordered,
mimicking my advice whenever her emotions got away from her.
“Breathe in slowly, Mommy. Slowly.”

I did as I was told, caught my breath, and
somehow controlled my crying. Then I patted the bed, and Jessie ran
across the room and jumped up next to me. I gathered her into my
lap and kissed her lightly on the forehead.

“Are you sad?” she asked. She spread her
father’s T-shirt over her toes.

“Just a little. Now that you’re here, I’m
fine.” I wiped the last tears from under my eyes and smiled.

“Why were you crying?” She ran a finger
along my cheek.

“Please,” she begged. She tugged at my
nightgown.

“Let’s see,” I said. I set her on the bed,
stood up, and crossed the room to the bookshelves. A sudden wind
heralding the predicted early fall burst through the open window as
I passed. I slammed it shut, shivering slightly.

On tiptoes, I reached up to the top
bookshelf, pulled out the blue and gold photo album that contained
bits and pieces of our lives over the last year, and brought it
back to the bed.

Jessie and I lay on our stomachs over the
photographs. She opened the album, which looked heavy and large in
her small hand, then I flipped past the pictures taken during the
winter months of 1978. When I reached the April 1978 photos from
the dedication of the Newell Hagerdom County Courthouse, I
stopped.

I pointed to a picture of Jessie. “Oh, look
at you in your sailor dress. I bet you’ve grown an inch in just six
months.”

“I look like a little kid there,” she said
in her most mature four-year-old voice.

“Remember that day, Jessie?” I asked her.
“We were celebrating the opening of your granddaddy’s new
courthouse. I guess I’d say all of this mess started that day.”

“You mean the twins?” she asked profoundly,
pointing in the picture to my bulging eight-and-a-half-months
pregnant belly.

The Innocent Mage by Miller, Karen
French Romance Cooking Class by Beth Mathison
The Distraction by Sierra Kincade
Numb by Sean Ferrell
Pink Buttercream Frosting by Lissa Matthews
All the King's Men by Robert Marshall
Spartan Frost by Estep, Jennifer
Gideon the Cutpurse by Linda Buckley-Archer
Mission: Earth "Death Quest" by Ron L. Hubbard
Once Upon a Romance 02 - As The Last Petal Falls by Jessica Woodard