Read No One Wants You Online

No One Wants You 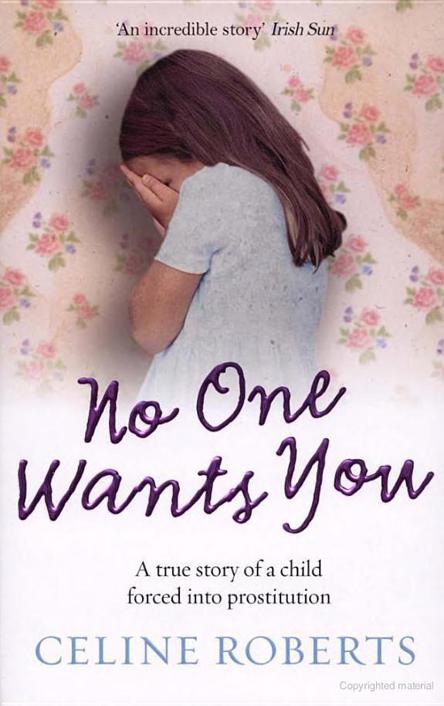 21. A Soulmate and a Wedding

Given away by her mother at five months old, raped on the day of her first communion at age seven – when Celine Roberts was told ‘No one wants you’, she believed it.

Illegitimate and unwanted, Celine was forced by her foster mother into prostitution. Her bones were broken, her nose was crushed and she ate candle wax to stay alive.

Celine was finally rescued and sent to an industrial school, where she picked up the pieces of her shattered life. She also began the search for her parents. But what she found gave her battered survival instincts the hardest knock of all …

Full of the most heartbreaking tragedy but ultimately survival and hope,
No One Wants You
is the remarkably honest and compelling memoir of a woman triumphing over her brutal past.

Now in her late fifties, Celine Roberts has recently completed a Masters in Neurology and Rehabilitation at Brookes College, Oxford. She lives in Surrey.

Dedicated to all the silent survivors of abuse

of any kind who feel trapped and unable

to raise their voice in protest
.

My emotional future was determined by a life-changing event that happened in May 1956. At age seven, I was to make my First Holy Communion.

There was quite a lot of excitement among the children at school in the weeks leading up to this day. Even my foster-mother made sure that I would not miss out on this grand occasion. At least she would be seen by others to be looking after my religious education.

We had to learn certain new prayers. On a practical level, we had to go to the church to practise walking up the aisle, kneeling at the altar rails and sticking out our tongues at the priest, to receive the Communion wafer into our mouths.

Everybody would be dressed up.

There was great talk among the girls about what kind of dress they would wear. Of course all clothing for the day was to be in white. Bearing in mind that my clothes were always second-hand rags and never ever having had a school uniform, I asked my foster-mother with cautious expectation if I would have a white dress. ‘Course ya will, Child, course ya will,’ she assured me in her lilting Cork accent. I didn’t really believe her. I usually had to go and pick up second-hand clothes and shoes for myself from a shop in Limerick. I was afraid to say anything and just prayed that I would get
a
white dress so that I didn’t look different from all the other girls.

First Communion was to be at early mass on a Sunday morning. After mass we were to go to the school for breakfast and to play among ourselves for a few hours in the schoolyard. I was also looking forward to breakfast as I had heard that we were going to have rashers and sausages. I had never eaten them before but I had smelled them cooking. My foster-mother used to cook them on very rare occasions. They used to smell lovely and my mouth would water when they were frying, but I was never given any to eat. ‘They’d poison ya, Child,’ was what I was told, as she chewed them all up. They were always accompanied by several slices of fried bread, oozing grease that dripped on to her ample bosom.

A few days before Communion Sunday, the parish priest arrived at the house with a large box. I was called in to meet him. He opened the box in front of my foster-mother and myself and took out the most exquisite, spotlessly white Communion dress and head-dress that I had ever seen. He handed it to me.

‘This is from your auntie nuns in Cork,’ he said.

I had no idea what he meant by my ‘auntie nuns’. I did not know any nuns except the teachers at the convent school which I attended on an irregular basis. The remark went right over my head. The dress was brand new. I had never seen anything so beautiful in my life.

‘This is your First Communion dress. It’s yours.’

I was overcome with excitement. I would have my own new dress for the big day.

Sunday dawned. I was up early and washed in a pan of water from the water barrel, as best I could. The water was freezing and there were insects floating in it. I dried myself off with a rag that was left hanging on a nail in the kitchen.
We
were fasting before Communion so there was no need for breakfast. My foster-parents stayed in bed.

A pair of white shoes had arrived a day after the dress. They were lovely but they were about two sizes too big for me. I stuffed paper in them to make them fit snugly. I was used to doing this as all my shoes were second-hand and never fitted properly anyway.

When I was dressed, I felt like a princess.

I walked to the church with my foster-mother and when we arrived I joined the other children in the front row of the pews.

The ceremony went according to plan and then we went back to the school where we all had breakfast. I was starving at that stage but I was used to no breakfast. I can still remember how delicious the rashers and sausages tasted. The nuns had laid the table and the hall looked really white and nice, with long tablecloths on all the benches. To this day I love the smell of bacon.

After breakfast it was out to the schoolyard to play. After a couple of hours the bell rang and everyone joined their families who had come to collect them. I remember thinking that everyone else had their father with them, except me. I was told to go home on my own because no one turned up for me. That was normal and I didn’t mind.

It was a two-mile walk home and on the journey I met a number of people. They all said that I looked lovely and a few of them gave me money. One gave me a sixpence. Others gave me a threepenny bit. One man had a camera and asked me to stand beside the gate of his house and he would take my photograph. He said he would give me the print when he had it developed. I was thrilled.

I was so happy by the time I reached home. The sun was shining. It was a lovely day in May. A few of the usual visitors, mainly adult men, had called at the house. There were about three or four of them. I had met two of them when I was out working in the fields, picking potatoes. I
didn’t
like working with them because they made fun of me and were always poking me. They used to say that I looked like a little tinker. They said that they were calling especially to give me a present of money for my First Communion. Some tried to give me a sixpence or even a shilling, but when my foster-mother saw the coin she berated them into making a larger donation.

‘Ah ya stingy divil ya, give her a half-crown, at least,’ she said, as she stood over them while they dug into their pockets once again.

When they had given the money, which I handed to my foster-mother, out came the bottles of stout. It was to be a party in the middle of the day on a Sunday.

As we were walking through the fields on that sunny May afternoon to collect the present that he had promised me, he suddenly grabbed me and threw me on the ground.

While he pinned me on the ground, with one hand over my mouth so that I could hardly breathe, he snarled, ‘Ya dirty little tinker ya. Ya won’t need this anymore,’ as he ripped off my Communion dress. His words still haunt me to this very day.

I choked silently as I desperately gasped for air through his rough, foul-smelling fingers. I felt something snap and tried to scream. My hand was killing me. I couldn’t move it. With his one free hand he ripped away my knickers. He then unbuttoned and lowered his trousers. He pulled my legs apart and tried to force something hard inside me. He kept pushing and pushing. It was agony. He was leaning over me and muttering and grunting. I tried to turn off the pain from my lower body. He continued to push into my body, with
thrusts
. It felt like it went on forever. He eventually collapsed on top of me. He was so heavy.

I went dead inside. I shut down.

When he had got his breath back he rose up, fixed his trousers and just walked away in silence.

He just left me there on the ground.

I was seven years old.

I was covered in blood.

Trembling uncontrollably, I made my way home, injured and alone. I could barely stand up. I could only walk a few steps at a time. The pain was excruciating. I was weak from loss of blood and felt dizzy.

I made it as far as the pond where I tried to wash the dirt, the blood and the sticky stuff off me. I was crying because the beautiful First Communion dress sent to me from my auntie nuns was destroyed. It was torn and covered in blood and muck, and I thought my foster-mother was going to kill me.

I woke up in my foster-mother’s bed. I have no idea how I got there or when I was put there. I was there for about five days. I was drowsy most of the time, but I was aware of a beautiful, tall, well-dressed lady in the room who talked to the others but not to me.

My injuries were bandaged up and I was left alone to recover. Nobody said anything to me about what had happened. I was too scared and sick to say anything. The wounds became infected and I was very sick for many weeks afterwards.

My mind never did.

That day, my First Holy Communion day, I was damaged, utterly. Every other little girl who made her First Communion
on
the same day as me, in 1956, got nice presents from her loving parents and relatives. What present did I get on my special day? I was brutally raped by a monster who left me injured with a broken wrist and three broken fingers in a muddy field. I will never forget what should have been one of the happiest days of my life, but for all the wrong reasons.

There's a Shark in My Hockey Pool by Dave Belisle
Forbidden Pleasure by Lora Leigh
Who's Sorry Now (2008) by Lightfoot, Freda
Exile (Keeper of the Lost Cities) by Messenger, Shannon
Transcription by Ike Hamill
The Devil in the Flesh by Raymond Radiguet
3013: GENESIS (3013: The Series Book 11) by Laurie Roma
Double Down by De Leo, Vicky
Wickett's Remedy by Myla Goldberg
Lone Wolf by Tracy Krauss