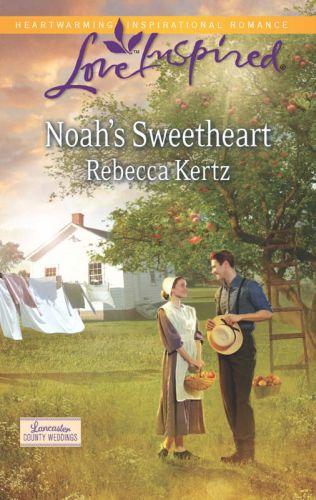 A Place To Heal

After suffering a broken engagement, teacher Rachel Hostetler is looking for a fresh start. When handsome Noah Lapp rescues her from a runaway buggy her first day in town, things seem hopeful. Then Rachel hears talk that Noah is expected to court her cousin, Charlotte. Yet Noah spends all his free time with Rachel. Will Rachel discover the truth without losing her heart? And find a happy-ever-after in Happiness, Pennsylvania?

Sitting back, she shook her head.
“Nay.”

“What happened to spook your horse?”

Noah watched her pull herself together enough to stiffen. “Not my horse,” she replied. “Not my buggy.”

She met his gaze head-on, and he felt a jolt. She had lovely warm brown eyes, but her pallor was sickly, and he saw that she trembled. “I’m sorry,” he said, not really knowing for what. “Are you cold?” He stood back and took off his coat, placing it over her shoulders and around her. “You are shaking.”

She released a solid breath. “I could have been killed. You saved me.
Danki.
” A shy smile lit up her face, and in that moment he felt his pulse quicken as he noticed every little detail about her, the warmth of her golden-brown eyes, the whiteness of her smooth skin, the glimpse of her white
kapp.

“You’re Charlotte’s kin, Rachel?” Noah asked. “And you are a schoolteacher,” he said. “At our Happiness school?”

Rachel studied him and nodded.
“Ja.”

has lived in rural Delaware since she was a young newlywed. First introduced into the Amish world when her husband took a job with an Amish construction crew, she took joy in watching the Amish job-foreman’s children at play and in swapping recipes with his wife. Rebecca resides happily with her husband and dog. She has a strong faith in God and feels blessed to have family nearby. She enjoys visiting Lancaster County, the setting for her Amish stories. When not writing or vacationing with her extended family, she enjoys reading and doing crafts.

And now, Lord, what wait I for? My hope is in thee.

For Judith, with love

R
achel Hostetler watched as Aaron Troyer took her small black valise and loaded it into the carriage.

“If you’ll wait in the buggy, Rachel, my sister Martha will soon join you.”

“I’m sure she doesn’t.” Rachel felt her stomach tighten with trepidation. It wasn’t the size of Martha that concerned her. It was the type of carriage. The only vehicle available to take her from Lancaster to Happiness was this small single bench-seat buggy, the same type used for courting by the Old Order Amish. Back in Ohio, she’d ridden frequently with Abraham Beiler in a similar buggy when he was walking out with her…until the accident over a year ago that had changed her life forever.

She hadn’t ridden in an open courting buggy since, preferring the safety of her family’s enclosed carriage. She didn’t want to ride in one now, but it seemed that she had no choice. It was the only way for her to get to the village of Happiness and her new position as schoolteacher there.

Without thought, she slipped her hand inside her black traveling cape to touch a protective hand to her midsection. Some things just couldn’t be forgotten, no matter how hard she tried. But scared or not, she’d just have to do it. It wouldn’t do to start off here in this new place being a coward.

The horse shifted restlessly; Rachel gasped and retreated a few steps.
Don’t be a goose,
she told herself. The bay looked like a perfectly sensible animal. But she couldn’t help offering a silent prayer.

“Please, Lord, protect me from all evil,” she whispered.
No matter what form evil takes.

She stared at the buggy, took a deep breath, grabbed hold of the side and climbed on board.

“It’s nice of you to drive us to town, Noah.” Charlotte King smiled at her neighbor and childhood friend. “
Mam
needs more flour and cinnamon for tomorrow’s baking, and
Dat
is too busy repairing the windmill to take me.”

Noah nodded. “I know your
dat
is busy, Charlotte. I enjoy going to town. ‘Tis no inconvenience to take you.”

“And me?” Charlotte’s little brother piped up.

“
Ja,
Joshua. Nice to have you along as well.” He reached back and tugged the boy’s straw hat down over his eyes, and Joshua giggled.

The spring sunshine felt warm against Noah’s face as he steered the wagon along the blacktop road toward Bird-in-Hand. The surrounding farmland was beautiful, with spring growth in various stages. Songbirds filled the air with nature’s music, and the scent of the earth permeated from the surrounding farms. Only once did the roar of a big truck that passed the buggy, blowing black from its exhaust pipes, drown out the quiet of the fields.

It was a good day for a drive; the fact that the day was to be spent in Charlotte’s company only made it better. They’d be running errands for his father as well as Charlotte’s mother. When Samuel Lapp had heard that Noah would be taking Charlotte to Miller’s Store, he’d provided his son with his own list. He would have made the trip in a day or two himself, Samuel Lapp had told Noah, but since Noah was going now…

The three young people chatted easily as they enjoyed the ride. Spying a familiar face behind a plow, Noah lifted a hand in greeting to Abram Peachy, a member of their church.

“Nice morning for plowing, Abram. See you got an early start.”

The man nodded. “Hope the weather holds out until we’re done planting.” His eyes focused briefly on Charlotte before shifting back to Noah beside her. “Morning, Charlotte,” he said.

“Morning, Abram,” Charlotte called. “How are the children?”

The widower’s gaze softened. “They are doing well. ‘Tis nice of you to ask.”

“Joshua!” Charlotte scolded with a quick look at Noah.

“You’re not to pester Noah for ice cream every time we ride into town with him,” Charlotte warned. “Last time was a special treat.” And to Noah, she said, “You’ll spoil him rotten.”

Noah winked at Joshua. “We men have to stick together,
ja?
”

Joshua giggled again and slid back on the bench seat.
“Ja.”
With an impish grin at his sister, he began tapping his shoes against the floor.

“Sometimes I think you’re no older than he is,” Charlotte teased.

“But you like me anyway.” Noah grinned at Charlotte, who couldn’t help grinning back. “We’re going for ice cream,” he told Abram. “You have a
gut
day now.”

The older man waved and then slapped the reins over the horse’s back. The big Belgian walked on, and the plow cut a deep furrow in the rich, dark earth.

“A good farm, he has,” Charlotte said.

“And a good farmer. A pity Abram lost his wife so young.”

“God’s will is sometimes hard to understand,” Charlotte agreed.

It was easy to drive the wagon through the countryside. As they approached town, the number of cars on the road increased, and Noah had to handle the wagon more carefully. This area of Lancaster County invited tourists, who often didn’t realize the danger of passing a horse and carriage at a great rate of speed. Fortunately, on this day, the cars they encountered slowed down appropriately. Perhaps it was the warmth of the spring day that had captured everyone’s fancy on this Tuesday. Whatever the reason, Noah was able to relax and enjoy the ride and Charlotte and Joshua’s company.

They bought their supplies in several small shops and then drove along the stretch of road from Miller’s Store toward the village of Intercourse, where they would enjoy their ice cream. Joshua could barely contain himself; he was so excited to eat his favorite treat. Charlotte gently reprimanded her younger brother, instructing him to be still.

A dog barked ahead. A horse whinnied and then snorted. Noah heard a high-pitched scream as he saw a spooked horse rear back before bolting at a dead run in their direction. He caught sight of a woman’s pale face under a bonnet as the open four-wheeled buggy came barreling down the road. He felt a thundering in his chest as he immediately saw the danger she was in.

“Charlotte, take the reins!” he said as he pulled his wagon off the road.

“Noah!” Charlotte exclaimed with alarm as Noah bounded from the wagon. “Be careful!”

But he was already running out to try and stop the panicked horse before the buggy overturned. Fear lodged in his throat at the glimpse of the terrified young Amish woman who sat in the buggy, clutching one side with white-knuckled fingers.

The horse raced closer, its ironclad hooves pounding the road. Noah shifted right, out of its path, at the last moment and then jumped to grab the animal’s harness. He cried out with triumph as he got a firm handhold.
Please, Lord, give me strength!
He fought to hold on as the horse continued its runaway pace. Struggling not to become entangled in the gear, he levered himself onto the horse, gripping its sides with his legs to hold on to his seat.

The animal neighed in angry protest. Heart pounding, Noah leaned low against the horse’s neck to grab hold of the reins. Successful, he straightened, pulling back on the leather straps.

“Whoa!” he called.
“Schtupp!”
He applied pressure slowly but firmly. The horse jerked and fought before breaking into a trot and finally a walk as he continued to murmur soothingly. “Gently. Take it slow, now.
Gut
boy!”

At last, the carriage rolled to a stop, still upright, as the animal finally obeyed the command, and Noah felt a sudden rush of relief. Once the horse was calm, he turned to check on the buggy’s terrified passenger.

She gasped for breath, unable to answer. He saw only the top of her black bonnet as she bent forward, hugging herself with her arms.

He climbed down from the horse carefully, patting the animal’s neck, speaking to it softly, reassuringly.

“Noah, you could have been killed.” A man ran up to help Noah. He took hold of the horse’s bridle, freeing Noah from the task.

“
Danki,
William,” Noah said, recognizing a neighbor and fellow church member, William Mast. He didn’t want to think about what could have happened if things hadn’t gone his way.

With growing concern, he approached the occupant in the buggy, stopping at her side. “Are you hurt?” he repeated softly.

Sitting back, she shook her head.
“Nay.”

“What happened to spook your horse?”

He watched her pull herself together enough to stiffen. “Not my horse,” she replied. “Not my buggy.”

She met his gaze head-on, and he felt a jolt. She had lovely dark eyes, but her pallor was sickly, and he saw that she trembled. “I’m sorry,” he said, not really knowing for what. “Are you cold?” He stood back and took off his coat, placing it over her shoulders and around her. “You are shaking.”