Read Not a Good Day to Die Online

Not a Good Day to Die 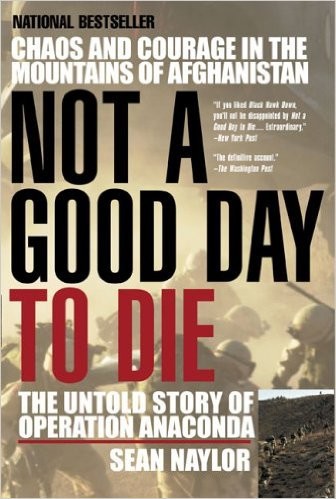 NOT A GOOD DAY TO DIE

THE UNTOLD STORY OF OPERATION ANACONDA

NOT A GOOD DAY TO DIE
SEAN NAYLOR

Berkley is a registered trademark of Penguin Group (USA) Inc.

For my brother, Mark

THIS
book could not have been written without the help of scores of people, the vast majority of whom are U.S. servicemen and servicewomen.

Thanks are due to all the people I interviewed—in Afghanistan, the United States, and elsewhere—most of whom are listed at the end of this book. Their willingness to patiently recount events to me is one I truly appreciated. Their stories form the core of this book. Even those not quoted by name in the text helped frame issues and events for me, or provided invaluable photos, documents and maps. I owe a particularly large debt of gratitude to the troops who came forward to be interviewed against the wishes of their chains of command, in order to help me get the full truth.

Others deserving of special recognition are Captain Kevin Butler, the commander of A Company, 2-187 Infantry, and his first sergeant, Jonathan Blossom, who were gracious hosts when I and
Army Times
photographer Warren Zinn embedded with their company for Operation Anaconda. Lieutenant Colonel “Chip” Preysler of 2-187 and his command sergeant major, Mark Nielsen, were also very supportive of my project when it would have been easy for them not to be. The same can be said of their brigade commander, “Rak 6,” Colonel Frank Wiercinski.

Kathryn Meeks of U.S. Special Operations Command’s Freedom of Information Act office was always courteous and patient in dealing with my frustration at her command’s slowness in processing my requests. Brigadier General John Brown, Richard Stewart and the rest of the staff at the Army Center for Military History were also extremely helpful. Army Vice Chief of Staff General John M. “Jack” Keane and officers at U.S. Central Command helped open doors that might otherwise have remained firmly closed to me. Retired Colonel Mike Kershner read through most of the first section of the book and provided invaluable suggestions on how to improve it. He and retired Lieutenant Colonel Kalev Sepp also broadened and deepened my understanding of special operations.

I am profoundly grateful to my editors at Army Times Publishing Company—especially Elaine Howard, Tobias Naegele, Robert Hodierne and Alex Neill—for allowing me so much time away from the office to complete this project. In addition, Robert Hodierne, senior managing editor at the company, helped cut my manuscript down to size. Chris Broz, also of the Army Times Publishing Company, brought enthusiasm and expertise to the essential task of drafting the maps to help readers navigate the geography of the Shahikot Valley and its environs.
Army Times
photographer Warren Zinn was my partner in crime during Anaconda whose boundless energy and sense of humor made the long separation from home so much easier to bear.

I could never have accomplished this project without my agent, Scott Miller, whose sage counsel has been my guide since I returned from Afghanistan. Natalee Rosenstein, my editor at Berkley Books, has, like Scott, shown enormous patience and understanding from the moment she acquired the rights to my book.

Finally, I would like to thank Kristina Maze—who provided unflagging love and support throughout the two-and-a-half years it took me to research and write the book—and my family and friends, who saw so little of me while I immersed myself in the events that transpired on snowy mountainsides half a world away.

Reporting
Not a Good Day to Die

REPORTING
NOT A GOOD DAY TO DIE

THIS
was not an easy book to report.

Researching and explaining a complex and controversial operation fought by a dozen task forces was always going to be a challenge, despite the advantage I enjoyed having been present at the rehearsals for and some of the combat during Operation Anaconda. But even I, after thirteen years of covering the military, had not expected to find so many obstacles placed in my path by a handful of individuals with reputations to protect.

A deal struck between U.S. Central Command and U.S. Special Operations Command banned personnel from either command from discussing Anaconda with the press. The commands established the ban to prevent disclosure of the truth behind the Takur Ghar episode. But the gag order caught all special operations forces, including those who had nothing to do with Takur Ghar, in its net, slowing my ability to report on the Special Forces’ side of the Anaconda story. Meanwhile, both commands stalled for many months before answering my Freedom of Information Act requests (in CENTCOM’s case even claiming to have “lost” mine). When they finally responded, the results were so heavily redacted as to be almost unusuable. Despite the efforts of the generals involved, however, information nevertheless found its way to me from a variety of sources ideally placed to provide a comprehensive view of Anaconda. But the climate of fear the ban created forced me to use ambiguous phrases like “special ops sources” when attributing some of these facts. While this may seem frustratingly vague, the reader should be under no doubt that these sources knew what they were talking about.

The ban was only lifted in early 2004, after Generals Franks, Holland, and Dailey had left CENTCOM, SOCOM, and Joint Special Operations Command respectively. This allowed me to interview—usually under very controlled conditions—members of the 160
th
Special Operations Aviation Regiment, the Rangers and other special operations units, with the proviso in some cases that their full names not be used in print. These interviews helped me confirm information gleaned from other sources and flesh out passages describing events about which I had only scant details. Other vital information came from documents, some of which were sent to me anonymously. When it became clear that I knew more than they wished, U.S. Special Operations Command officials launched an internal investigation. The investigation’s ostensible purpose was to probe the alleged release of classified material, but its real goal was to punish those who might have helped me compile the facts, and to send a message to others tempted to break ranks and tell the truth.

In contrast to CENTCOM and SOCOM, the conventional Army was for the most part refreshingly straightforward and easy to deal with. Its soldiers and leaders made themselves readily available for interviews. Without their cooperation, I would still be researching and writing.

Command Sergeant Major Frank Grippe
—The tall, jut-jawed infantryman who was the top NCO in 1-87 Infantry.

Major General Franklin “Buster” Hagenbeck
—The 10
th
Mountain Division commander in charge of all U.S. forces in Anaconda except for the JSOC/TF 11 elements.

Chief Warrant Officer 4 Jim Hardy
—The experienced pilot who was the maintenance guru for the Apache helicopters that flew into the Shahikot Valley.

Brigadier General Gary Harrell
—The former commander of Delta Force who Franks had placed at the head of Task Force Bowie, the intelligence “fusion cell” at Gardez.

Lieutenant Commander Vic Hyder
—The SEAL officer sent by Trebon and Kernan to oversee the insertion of TF Blue elements into the Shahikot. Hyder’s recent history of poor judgment made him a dubious choice for the mission.

Major Jimmy
—The Delta Force officer who was Blaber’s second-in-command in AFO and also functioned as Blaber’s liaison officer in the Mountain operations center.

Captain Joseph Kernan
—The SEAL Team 6 and Task Force Blue commander. He had a reputation as one of the best swimmers in the Navy.

Lieutenant Colonel Paul LaCamera
—The commander of 1-87 Infantry. His Ranger background gave him a bond with many of the other officers in Task Force Rakkasan.

Zia Lodin
—The leader of the Afghan forces who fought on the Americans’ side in Anaconda.

Command Sergeant Major Mark Nielsen
—The combat-focused senior NCO in 2-187 Infantry, who was viewed as a voice of common sense by the battalion’s soldiers.

Staff Sergeant Randel Perez
—A 1-87 Infantry squad leader who had made the almost unheard-of switch to infantry from the supply corps because he wanted more of a challenge.

Lieutenant Colonel Charles “Chip” Preysler
—The 2-187 Infantry commander who was the first field grade officer into the Shahikot.

Staff Sergeant Andrzej Ropel
—A 1-87 Infantry squad leader; a Polish immigrant fighting for a country of which he was not yet a citizen.

Lieutenant Colonel Mark Rosengard
—The TF Dagger operations officer who combined a flamboyant bravado with a tremendous work ethic and an ability to inspire subordinates.

“Slab”
—The SEAL senior chief petty officer who led Mako 30. Blaber had a high regard for Slab, whom he knew from their days in the Balkans together.

“Speedy”
—The Delta Force master sergeant called Kevin W. who headed AFO’s India Team. His background as a triathlete and backwoods hunter gave him an edge in the Shahikot.

“Spider”
—Also known as “the Wolf,” this CIA operative headed the agency’s operations in Gardez. Well known to Blaber, he proved an invaluable asset.

Captain Glenn Thomas
—The leader of ODA 594, aka Texas 14; the first U.S. officer to venture into the Shahikot.

Brigadier General Gregory Trebon
—The Air Force special operations officer who was Dailey’s deputy in JSOC, and who Dailey placed in command of TF 11.

Major Paul Wille
—The lead planner for Task Force Mountain forced to design a plan based on the compromises reached between several different task forces.