Read Number of the Beast (Paladin Cycle, Book One) Online

Number of the Beast (Paladin Cycle, Book One) 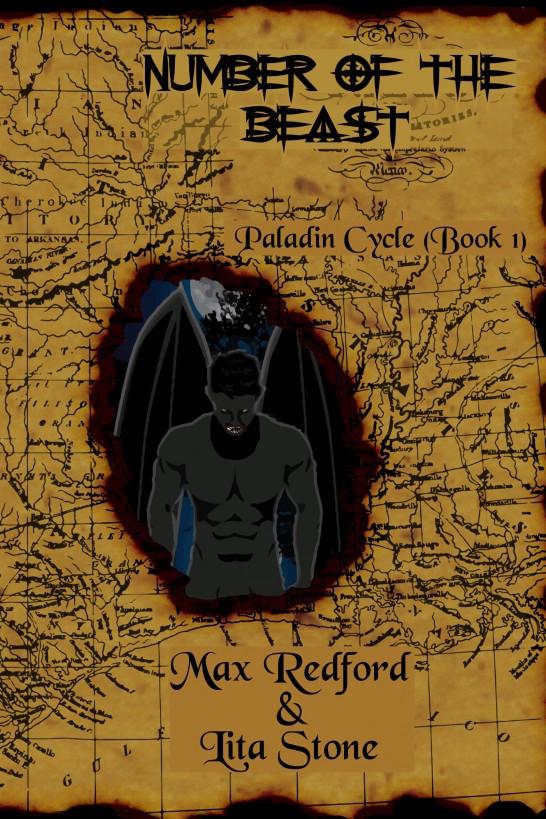 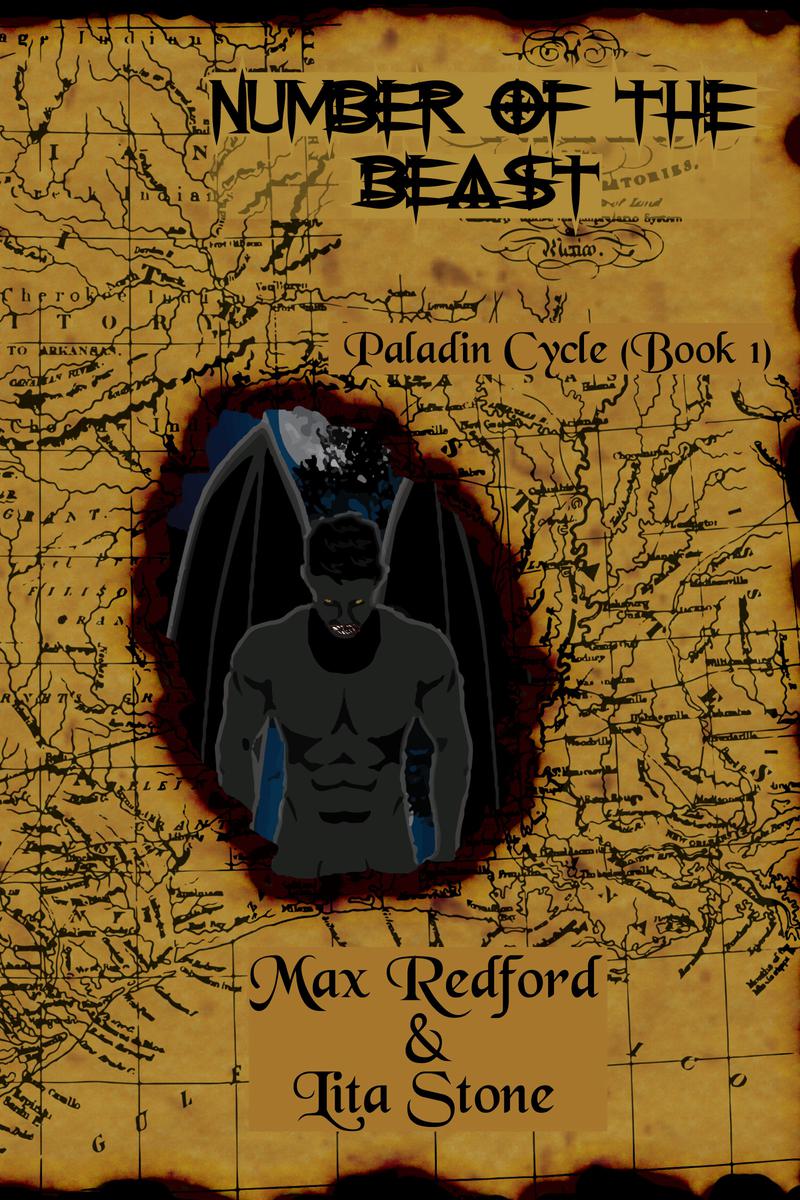 Number of the Beast

Number of the Beast

Without limiting the rights under
copyright reserved above, no part of this publication may be
reproduced, stored in or introduced into a retrieval system, or
transmitted, in any form, or by any means (electronic, mechanical,
photocopying, recording, or otherwise), without the prior written
permission of both the copyright owner and the above publisher of
this book
.

This is a work of fiction. Names, characters,
businesses, places, events and incidents are either the products of
the author’s imagination or used in a fictitious manner. Any
resemblance to actual persons, living or dead, or actual events is
purely coincidental.

A BRIEF FOREWORD ABOUT THE PALADIN
CYCLE

In the summer of 2011, my
then fiancé and aspiring romance writer Lita Stone and I began
weaving a tale of modern fantasy with a strong theme of romance.
Embracing the classic “Love Conquers All” theme we gave birth to
the characters Shane Baker, Amy Rae Winters, and the Geminus aka
“the Beast”.

Within that first summer
we also crafted a vast mythos involving multiverses and cosmic
beings and alternate histories, along with an ensemble cast
comprised of both everyday folk and supernatural beings inspired by
the Zodiac. Throughout the initial drafting of this first book
NUMBER OF THE BEAST—we aimed to capture the atmosphere, tone and
drama found in such things as True Blood and Friday Night Lights,
coupled with a healthy dose of the literature that Lita and I enjoy
reading—from fantasy erotic-romance to Lovecraftian mythos and
Edward Lee’s graphic horror.

And so all readers should
be warned that the Dark Fantasy series you are about to embark upon
extends the borders of multiple genres and is very much intended
for a mature audience who are not sensitive to adult language,
sexual content and graphic horror.

If these things offend you then
proceed with caution.

Because we are starving
artists, we are giving book one of this series away with the
confidence that after reading these 90,000 words you will join us
in the subsequent adventures of the Paladin Cycle.

I thank all the G1ers and
Sharp Edgers who supported our endeavor and efforts throughout the
last few years, especially Don, Simion, Pinkie, Allison and Alexis.
And my sincerest apologies for being an ornery jackass.

And to my dear old friend Kahz who
reminded me several times over the years that it was all a waste of
time.

Hey, it’s me, God. See them there
crates in the back of my pickup? Full of guns and computers they
are. See that there settlement on the distant horizon? That
twelve-foot rock wall surrounds a secret compound. It’s where I’m
delivering these here supplies.

Why is God delivering guns and
computers to some holy cloister in the middle of the New Mexico
desert you ask?

Because there amongst the mud brick
buildings resides one of our heroes, Atticus. He’s been training
for all of his seventeen years to be a mighty champion to oppose
the evil hordes that constantly threaten this particular
Earth.

Why am I telling you this story? Why
should you care? Well, I’m glad you asked.

You see I have a message so listen
closely. Ready?

Three things will stand
the test of time—faith, hope and love—and the greatest of these
is...that’s right! Love.

That’s just fine ‘cause I’m used to
it. Lots of folks get leery when God starts talking to them
directly. The ones who don’t get fidgety are the ones who talk to
me on a regular basis.

But hey, I’m not one to
judge.

Or maybe I am.

But whether you believe in me or not
is irrelevant to this particular story. This story is not about me,
but if you care to read more about me then you know where to look,
right?

That’s precisely what I
thought.

But you didn’t pick up this book—or
download it to your fancy e-Reader to get preached to by someone
driving a pickup, so let us get on with the good stuff.

You’re about to meet a lot
of interesting folks. Some from Texas and some from alternate
places along the space-time continuum and from far off exotic
worlds that I don’t travel to very often. You could say those
places are God-forsaken.

Some of you more discerning readers
may be asking that age old question: If I really am God then why
ain’t I doing anything more than hauling weapons and computers to
these holy warriors?

Well, I’m sure you’ve heard the debate
about free-will and all that.

All I can do other than supply them
with some useful tools is offer words of encouragement to my good
boy Atticus and his future allies.

Speaking of allies, let’s talk Shane
Baker. You see he’s another important soldier in the coming war. He
just hasn’t figured it out yet.

Come now, watch and see how they
fair.

The best of the best of the best. A
legend at the mere age of seventeen. A master swordsman and
marksman and the fastest runner in the compound. Though Atticus’
arcane techniques were lacking he could hold his own against any
skilled mage. But who needed magic when you possess physical
prowess that a tiger would envy?

Yet they still put him on guard duty
at the front gate, standing with his spear in hand. A crummy
spear!

All the years he’d guarded this front
gate he couldn’t recall a single moment where any nefarious
intruder had stormed across the desert sands of New Mexico in a mad
dash to invade the compound.

But there he stood guarding it with
his life. Him and his trusty spear with the staff carved from
hickory and a granite stone sharpened to a semi-lethal
bluntness.

He straightened the green bandana
around his head. Kneeling on one knee, Atticus tied the cord on his
knee-high moccasin boot. He jumped to his feet and raised his
spear. Like it was a mighty sword, he swung. His long red hair
fluttered as he sliced his spear through the air, decapitating his
invisible foe.

If any of those nefarious cosmic
monsters did decide to rush the gates he prayed the bars would hold
long enough for him to beat the miscreants to death with his
dastardly spear. Though he’d probably be better off cracking the
shaft so he could stab them with the pointy end of the stick.
Paladins were, after all, taught to utilize any means necessary to
defeat evil. And pointy sticks made for superb devil-slaying
weapons.

Perhaps the Elders were teaching him a
lesson in humility by giving him three consecutive nights of gate
duty. But for gibbering goblins’ sake! He was one of the prophesied
warriors! Did he need humility? What purpose did it serve a warrior
meant to slay an unearthly Beast?

Clanking and thudding sounded from old
Mueller's barn a hundred yards inside the gate. More thudding. A
shadow danced in the window of the barn's loft. The fiery desert
sun forced him to shield his eyes to get a clearer look.

When Atticus saw the rainwater blue
tunic hanging on a nail outside the barn his cheeks puffed and his
loins tingled.

Venora had followed him outside the
gates wearing that long blue tunic with a fashionable headdress.
Soon as they stepped foot into the canyon that tunic and that
headdress found their way onto the sand.

He had seen Venora in her
under garments before, yet each and every time it reminded him of
why the Order was so strict on women's attire. If all the women
chose to stroll around in their undergarments, then none of the
warriors would get anything done ever again. Thank the Almighty she
had the sense to use discretion and only disrobe inside the canyon
where none could see. And sometimes within the confines of old
cobweb-infested barns.

He swore she wore her
makeshift undergarments—homemade from nothing more than thin strips
of leather covering her bosom and nether regions—on their outings
so to get the advantage. As if his natural lack of focus and her
natural feminine wiles weren’t enough of a disadvantage.

But he wasn't going to
complain because he quite enjoyed his vantage point, purposefully
positioning himself behind Venora. When she took a steadying stance
to aim her shots, it was impossible to miss her taut muscles
clenching. Her buttocks hardened like beautifully carved stone. The
sweat on her legs glistened like oil on well-polished
steel.

Atticus summoned his
fellow guardsman over. “Peter! Come at once.”

Peter jumped from his
tower and hurried toward Atticus. “Sir?”

“
I need you to guard the
gate alone for a short time while I investigate a
situation.”

“
What situation do you
speak of, Sir Atticus?”

“
A matter of a most
sensitive nature.”

From the corner of his eye, Atticus
spotted a red pickup speeding toward them, its rear tires spitting
the sand of the Chihuahuan desert in its wake.

Atticus groaned. Venora would have to
wait.

The vehicle rolled to a
stop at the wrought iron gate. The driver, a middle-aged man with a
gray bowler hat rolled down the window. Plumes of sweet smoke
billowed from within. A strange music vibrated from the vehicle’s
speakers; a mix of bass, drums with an accented singer sounding
strangely like Cadet Jamal.

“
Just God again. Bringing
more school supplies.” Atticus gripped his spear, bracing it
against his chest, and stepped next to the car. “It’s only Gawd.
Lower your weapons.” He signaled the sentinels in the stone watch
towers on either side of the gate as well.

Peter pushed Atticus aside
and leaned in Gawd’s driver’s window. “Pop the trunk.”

“
Protocols state that we
must review all incoming persons and their cargo before entry
through the gates. And it is not as though we have any other
pressing matters to attend to.”

Atticus stared longingly
at the barn.

Lightbringer by McEntire, K.D.
And Home Was Kariakoo by M.G. Vassanji
The Private Wife of Sherlock Holmes (Irene Adler and Sherlock Holmes novella) by Douglas, Carole Nelson
Encore by Monique Raphel High
Murder on the Cliffs by Joanna Challis
This Great Struggle by Steven Woodworth
Gravity Brings Me Down by Natale Ghent
Sanctuary of Mine by S. Pratt, Emily Dawson
The Judas Gate by Jack Higgins
His Hotcakes Baby by Sabel Simmons