INDISCRETIONS OF THE QUEEN 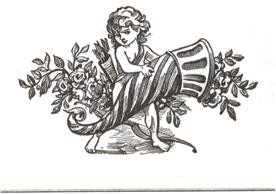 A Wedding in Brunswick

Charlotte Georgiana Augusta to Frederick William, Prince of Würtemberg. The

Princess was sixteen years old but quite ready for marriage, for life at the Court of Brunswick was free and easy; and both she and her sister, Caroline Amelia

Elizabeth, had never suffered the restrictions which were considered necessary in most royal courts. The girls had run wild, mixing with servants and villagers; and they already knew what obligations marriage entailed.

marriage, wondering when there would be a similar occasion for her, and

plaguing her governess, the Baroness de Bode, with questions.

‘Now, Baroness,’ she was saying, ‘whom do you think they will select for

‘Your Highness knows that that day is some years distant.’

‘Some years?’ demanded Caroline. ‘But why, pray? If Charlotte can marry at

sixteen, why not I?’

‘The Princess Charlotte is two years older than you.’

‘Two years? What is two years?’ Caroline narrowed her eyes and peered at

her governess. ‘I should like you to know, Madam Baroness, that I am not lacking

The Baroness gasped with horror, which made Caroline laugh.
She is

deliberately trying to shock me,
thought the Baroness
. Of course she is an
innocent girl. Or is she? Oh, this family! They are all so— odd. Sometimes I

wonder— And when I consider her brothers—

Caroline watched her governess as she guessed the woman’s thoughts. She

tossed back the long fair curls which hung over her shoulder and raised her light eyebrows; she was pretty and her figure was already well developed.

The Baroness thought
: She has too much freedom. They all have too much

‘But I would be free. Why should I be caged— like a prisoner? I shall always

be free. I shall do exactly what I want and when I have a husband— in two years

time, because if Charlotte has one, why shouldn’t I— I shall see that he is aware of this.’

‘You talk in a most unbecoming manner.’

‘I say what I mean. Is there anything wrong with that?’

‘There could be a great deal. You should pray more.’

Caroline made a face. ‘Oh come, Baroness, everyone has a right to an

opinion. You must admit that. I will never be anyone’s puppet. If I allowed

field that would not grow a single blade of grass. Have you always done

everything that was expected of you? Have you always been so good?’

‘Indeed not. I fear I have often been wicked.’

‘Why Your Highness, I suppose because an evil instinct impels me to do

‘But why allow yourself to be impelled?’

‘I suppose because I could not overcome my bad nature.’

The Princess laughed aloud. Then you are like a piece of clay, Madam. That is

all— a piece of clay, and therefore I do not think you are very wicked to allow

yourself to be moulded.’

‘But you have just said, Baroness, that you cannot help being bad. It is true.

We are all bad— very bad. But that was how we were created.’ She smiled

mischievously. So you see, Baroness, it is no use your chiding me for this and that for I just cannot help it. I have no say in the matter. It is simply the way I was made.’

‘You talk too much.’

‘Of course,’ agreed Caroline. ‘Do I not do everything too much? But you will

admit, Baroness, that it is better than not doing enough?’

‘You are determined to argue.’

‘And what better occupation? For how can we exercise our minds without

arguments. But how did this start? Simply because I said that it will soon be my

turn to have a husband.’

‘We cannot be sure—’

‘We can be sure of nothing in this world, you will tell me. But I am sure—

about many things. I am sure it is good that Charlotte has a husband for she is the kind of girl who needs a husband— early.’

laugh of hers which the Baroness always found a little alarming. And she added:

‘I hope—’ began the Baroness.

‘It is always good to hope,’ interrupted the Princess. ‘You even get what you

hope for— sometimes.’ She shut the book on which they had been working with a

final bang. ‘Now I really must go and fit on my dress. It must be ready for the

wedding, must it not? We cannot have the bride’s sister— soon to be a bride

herself perhaps— not looking her best. Who knows— there might be suitors for

my hand at my sister’s wedding.’

She had gone, leaving the Baroness staring after her, asking herself if the

Princess’s behaviour was a little more than odd. Or was it due to high spirits?

When one considered the others— one wondered.

Ferdinand, saw his daughter cross the courtyard and come face to face with a

the Court of Brunswick-Wolfenbüttel.

He watched the young man pause, bow deeply and stand gazing at Caroline.

A pretty picture, thought the Duke affectionately. In his eyes Caroline was

charming; she was so full of vitality, so natural and very pleasing to the eye, with those long fair curls. She had grown in the last few months and it might have been a woman standing down there. After Charlotte was safely launched it would be

Not yet, he thought. He would keep Caroline at home as long as he could. He

had admitted to his mistress, Madame de Hertzfeldt, that Caroline was his

She was obviously flirting with young John Thomas Stanley down there, but

if she had known that her father was watching she would have been alarmed, for

he was the one person of whom she was in awe. Sometimes he wished that it were

not necessary to inspire fear in his children; but of course it was particularly so with children such as his.

Approaching him she slipped her arm through his. ‘You’re anxious,’ she said,

boy. ‘Yes,’ she went on. ‘It will be her turn next and perhaps we should not delay too long.’

Her face still seemed to him the most beautiful he had ever seen; it was many

years since he had noticed her and fallen in love with her. He thought now, as he had thought so many times before, how different everything would have been if

he could have married her.

‘Charlotte is happily settled,’ she reminded him, and drew him away from the

‘A good match,’ he admitted. ‘You think she will settle?’

‘Now that she has a husband, she is more likely to.’ She did not add that

Charlotte’s passing from his care to a husband’s was a relief to them all; but he knew she thought this for there were no secrets between them.

Tall, stately, beautiful and dignified, devoted to him and the affairs of

Brunswick she was in all but name his Queen. Their son was the boy he would

have liked to be his heir. A soldier, handsome and, in his father’s eyes, noble in every way, already making a brilliant career for himself— and like his mother,

serene. Oh, God, he thought, how he admired serenity! It was because of that taint which sometimes he thought had smeared all his legitimate children.

‘I think,’ he said, ‘that Caroline will want a husband now that her sister has

‘Caroline is a child yet.’

‘Do you think so? You saw her down there—’

Madame de Hertzfeldt was silent for a moment. Then she shrugged her

shoulders. ‘Like her sister she has matured early. But you won’t have to raise the money for her wedding for a few years.’

‘It might not be easy. Her brothers—’ A look of pain crossed the Duke’s face

and his mistress hastened to console him.

‘There is nothing wrong with Frederick William and the girls.’

‘Oh, my dear, what an affliction! My eldest son almost an imbecile, my

second completely so and the third blind. What is wrong? Why should I be so

cursed? If I had married you—’

‘We have been happy together for all these years.’

‘What should I have done without you?’

with me never will.’

marriage with his English wife, even the fruit of that marriage which had caused

such grievous disappointment. All these years they had been lovers— even before

his marriage to Augusta, and he had refused to give her up when Augusta had

arrived from England and found her installed as mistress of his household. And so she had remained in spite of Augusta’s protests and she had behaved with such

dignity that in time even Augusta had come to accept her value.

‘If our son—’ he began, but she silenced him.

‘You have your legitimate heirs,’ she reminded him. ‘There is no gainsaying

‘Only private people can expect happiness,’ he answered bitterly, ‘because

they can choose their mates. The marriages of royalty scarcely ever result in

Wait for Me by Diana Persaud
Cursed Love by Lanie Jordan
Shattered Destiny: A Galactic Adventure, Episode One by Odette C. Bell
Sarah Simpson's Rules for Living by Rebecca Rupp
Anne Stuart by To Love a Dark Lord
The Wrong Kind of Blood by Declan Hughes
Undead Underway by Brenna Lyons
Weddings and Wasabi by Camy Tang
Double Vision (Unknown Identities #2) by Black, Regan
The Stand Off by Stefani, Z