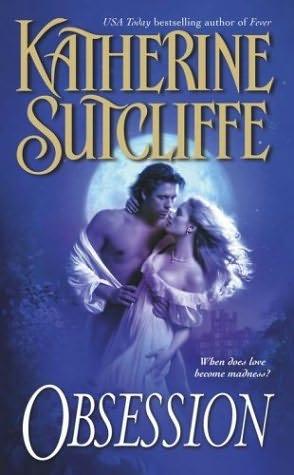 “The searing power of the love story and the sheer intensity of emotion in Ms. Sutcliffe’s writing are awe inspiring…. Not for the reader seeking light entertainment, but
Fever
is for those who cherish a ‘meaty’ read and long to be drawn into another time and place, a lush backdrop and a rich romance. A ‘keeper’ on my shelf and one more memorable Katherine Sutcliffe.”

“Ms. Sutcliffe is one heck of a storyteller who ties you up in knots, keeps you glued to the pages, and has some of the best heroes and heroines around today…. Guaranteed to knock your socks off. I hated for
Fever
to end! I wouldn’t mind seeing a sequel for this one.”

—
The Belles and Beaux of Romance

“Ms. Sutcliffe outdoes herself with
Fever…
a captivating story with a hot and fiery passion. Appealing characters and provocative plot. A definite keeper!”

“Fever
is a not-to-be-missed book! From the moment Chantz and Juliette meet, the sexual tension is high. The plot is fast paced with the many secrets that are waiting to be revealed. The characters and setting came to life…. Ms. Sutcliffe has a way of enticing readers into wanting more.”

A SELECTION OF THE DOUBLEDAY BOOK CLUB

Visit us on the World Wide Web:

T
HE DOWAGER DUCHESS OF
S
ALTERDON
perched like a crow on the church pew, her stubborn old chin outthrust, her liver-spotted brow creased, and her shoulders slightly humped within the black garment she wore—she was not, after all, here to celebrate the most gossiped about marriage since my brother Clayton had wed some red-haired waif who haunted a crumbling old lighthouse and stole the King’s horses.

The dowager’s gnarled, bejeweled fingers curled around the crook of the cane she used to hobble around, and she impatiently bumped the cane upon the chapel floor, looking neither right nor left, seemingly oblivious to the whispers and occasional giggles of the guests who had packed the church, more for entertainment and perverse curiosity than to honor the bride and groom.

She wasn’t oblivious, of course. I, Trey Hawthorne, the dishonorable, infamous, and disgraceful Duke of Salterdon—the bane of the dowager’s existence—suspected my grandmother’s hearing was still as sharp as the diamond facets on the ridiculously ostentatious ring she wore on her left hand. If someone within a country mile so much as murmured the Salterdon name in anything other than worship, she knew about it—and God help the “hateful befouler.”

“Hateful old bitch,” I murmured as I gazed beyond the ajar rectory door, straight into my grandmother’s eyes—gray as my own—and watched her thin, silver eyebrow lift, knowing full well she could read my lips.

I returned her look with a cold curl of my mouth, a lift of my port glass in toast, and a slight bow that was more mocking than courteous.

“There’s still time to back out,” came my brother’s voice near my ear.

I turned my head a little too fast. The liquor in my veins slammed me hard enough to totter me backward.

My twin brother’s face swam before me, my mirror image—dark hair, slightly curly, stone gray eyes, chiseled features, and a mouth that reflected both concern and bemusement over my situation.

But that’s where the similarities ended.

While Clayton Hawthorne had the heart and soul of a flipping saint, and the luck of the blessed, I was one thin hair from burning in hellfire for eternity.

My peers didn’t refer to me as “Old Scratch” for nothing.

Clayton frowned and put out one hand to catch my arm, offering support. He sighed and shook his head.

“For the last three years, your objective in life has been to make Grandmother suffer—and suffer she has. You’ve burned through your inheritance, you consistently find ways to get your name blasted throughout the London news, and finally scandalize with the ultimate revenge—to marry not one of the acceptable young ladies of Grandmother’s choosing, but a notorious, thrice-divorced, twice-widowed older woman, whose penchant for cheating on her husbands and ruining them financially exceeds even your reputation. Edwina Narwhal Frydenthrope Thromonde Wohlstetter Rhodes is a…a…”

“Hussy.” I quaffed the last of the port and plunked the empty glass aside. “Whore. Doxy. Slut. Slattern. Bawd. Harlot.” I grinned and blinked sleepily at Clayton. “Shall I continue?”

“And you’re marrying her.”

I shrugged and adjusted my silk cravat. “So I am.”

“Of course it won’t. But she’s entertaining in bed. And she has money. In case you haven’t noticed sufficiently, I need money.”

Clayton’s eyes narrowed. “How could I not notice? Thorn Rose Manor has gone to rack and ruin the last year. You’re down to one scullery maid with a habit of pinching the family silver—or what’s left of it that you haven’t sold to appease your gambling debts, a butler who is too frequently prostrated by the grape, and a groom too lazy to swat flies, much less muck the stalls. Trey, if you need money—”

I shoved my brother aside and walked unsteadily to the mullioned window overlooking the grounds. For as far as I could see were the fancy coaches of every high-stocking, blue-blooded family in England.

“If you bring up Maria again, I’m going to punch you. Hard.”

“Admit it. You’re still in love with her.”

Clayton moved up behind me, placed a compassionate hand on my shoulder.

I shrugged it away and laughed, a brittle, angry sound, as heat rushed to my face.

“Obviously, the young woman wasn’t nearly so serious in her supposed affection for me as I was for her, or she wouldn’t have vanished. She simply didn’t care to be found. At least not by me.”

Looking at Clayton, I added, “Had Grandmother not sent her from the house—”

“What difference would it have made, if Maria didn’t love you?”

My eyes briefly closed. The heat in the small room made me sweat. The tailored wool suit I wore clung to my skin and I began to feel nauseous.

Maria Ashton’s image rose before my mind’s eye—a pretty face with big blue eyes, tumbling silken flaxen hair, and a gentleness of spirit that had rescued me from hell’s torment. I might have died, had she not responded to my grandmother’s call for a nurse to minister me in my illness and the injury to my head inflicted by highwaymen who had left me for dead.

Maria not love me? Ah, but there was the problem in a nutshell. She had trembled with passion beneath my body, sacrificing her cherished innocence. She had vowed her love for me in a thousand ways.

The entire world had turned its back on me. Maria, daughter of a vicar, had appeared like some earth-bound angel to save me.

For the first time in my miserable life, I had actually fallen in love. Deeply. And it wouldn’t leave me. Despite the betrayal of her disappearance. Despite my immense anger. Though I was about to wed another, my heart thumped like a hot lead weight in my chest when I recalled the months I had searched for her, and the letter that had eventually arrived six months to the day after she had ridden away from Thorn Rose in my grandmother’s coach.

“Your Grace, what transpired between us was a mistake. I have wed another. I wish you happiness. Maria.”

Maria. God, how I had adored her. In my fogged lunacy I had poured out my heart and soul to her in music—my only way, during that dreadful time, that I could confess my feelings.

Even now, three years later, the strands haunted me, playing over and over in my mind until I felt insane again.

Music from the chapel drifted to me, as did the murmuring of the collected guests. No friends there. I had no friends. Not any longer.

Dressed in their splendid clothes, arriving in their fine coaches, their wealth and titles dripping from their aristocratic pores like chips of ice—they were here for one reason. To watch a man step from the precipice of his crumbling dignity and spiral into the abyss of total ruin.

How to Outrun a Crocodile When Your Shoes Are Untied by Jess Keating
It Started With A Christmas Tree - A Lizzie Fuller Christmas Novella by Beth Prentice
Illicit Craving (Bend To My Will #5) by Emily Jane Trent
The Fifth Season by Korzenko, Julie
DEFIANT (A WESTERN BAD BOY ROMANCE) by Pierce, Scarlet
Once Around by Bretton, Barbara
CORAL - Forever (A Romance Trilogy, Book 3) by Delaney, Clair
Night Kill by Ann Littlewood
In the Loyal Mountains by Rick Bass
Valour by John Gwynne