Of Noble Chains (The Ventori Fables) 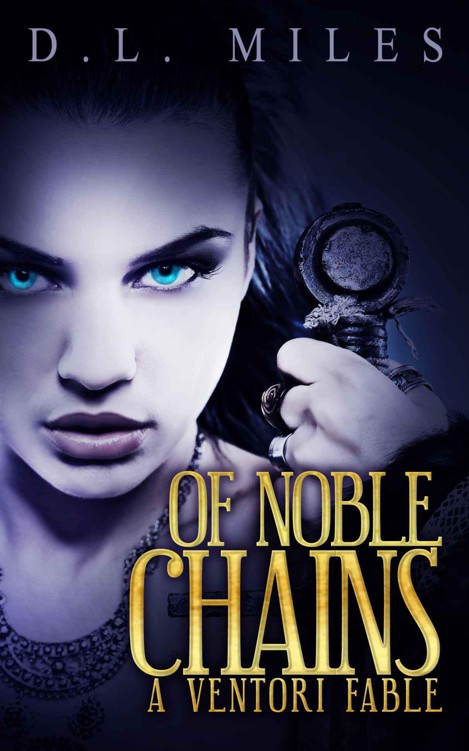 Of Noble Chains: A Ventori Fable

The Warden in the Gates

The Warden in the Gates, the first two chapters:

“And what’s this say, Zia?” her brother asked, holding the little girl in his lap.  He pointed to the northern part of the map, near the house they now lived in.  He had ditched his extra classes to spend time with her, because he knew he wouldn’t be able to see her much when he started college.

Zia pointed at the same area and said, “North Quarter!”

“Very good!  How about over here?” he dragged his finger west, to a tangled mess of barren lands.

He laughed, giving her a hug as a reward, “That’s right!  Now how about here?”  His finger slid south, to the area she had been forbidden to go.

“South Quarter, Specter lands!” she growled and bared her teeth playfully at him, and he mimicked her.

She pouted and faced the book.  “Okay.”

“But for the ones that do go STRAY, the Ventori will keep you safe.  Like me!”

Zia crawled around in her brother’s lap to face him, the book forgotten.  He thought she looked sad, and she stared straight at him with a bit of wonder as she asked, “You won’t go without me, right?  I wanna be Ventori!”

He laughed, and patted her head.  “Never, kid.”

That was the moment Zia truly decided what path she wanted to follow, and it was the same as her brothers.

“It didn’t take long for the five clans to unite
themselves against the darkness all those years ago.  They did it to save everyone, because nobody else wanted to try.  Unfortunately their bravery wasn’t enough, even battling as one didn’t save all of them.

The clans f
ell, but so did the darkness, and the children of the sides that remained went into hiding, immersed themselves amongst the humans, dormant for eons; until one day, the Raijin clan stood up and declared war against those who lived in the shadows.  Soon the other clans joined them, all but the Neith, who chose to remain neutral.

It’s been just over a century since Havilan the Light revealed our people to the world, revealed that the nightmares are real too.
Although the humans had legends, stories told through generations, they had difficulty accepting the clans help.  And now the darkness is growing stronger with each passing day, awaiting their moment of glory; waiting for the opportune moment to strike, so they can take down the clans…take down all of us…”

“What about the humans?” a tiny hand rose into the chilled air, waving about to get Zia’s attention.
Breena, a little blonde girl wearing a pink sundress with matching bows stared down her storyteller, along with the rest of the New Havilan Library daycare attendees.  “Did we get to live?”

Zia resisted a chuckle and allowed her eyes to roll over the bookshelves a moment.  An elderly couple was peering at her, listening to her story, they were probably old enough to remember when the darkness was really bad.
Zia had been sure to leave out the part that the humans already knew of what lived among them; it just didn’t make the story sound as good.  “The Specter’s will leave no survivors, Breena,” Zia finally said.

The girls eyes dimmed a little, as did the o
ther children’s.  The librarian, and daycare supervisor, cleared her throat, warning Zia that her tale was getting a little too mature for the kids.  Zia pulled at the collar of her shirt and decided to change her answer.

“What I mean to say,” she continued, “is that as long as there are Trackers, you humans don’t have to worry about the darkness making a comeback.  We’ll save your sorry—um…we’ll keep you safe.”

Another hand shot into the air; Joshua’s dirt-caked face scrutinizing her every word.  “Mama says you’re a freak that should be put down just like all the Specter’s.”

Zia felt her eye twitch and forced a smile across her face.  These kinds of comments from Joshua and his racist mother weren’t uncommon.  She said, “Well, Joshua, your mother is an ignorant—“

“Ms. Noble!” the librarian cut Zia off before she could insult Joshua’s mother again.  The ankle-length skirt swished back and forth with her hips as she came around the desk.  “How many times have I told you not to insult the children’s parents?”

“Sorry Mrs. Mayfield,” Zia said, standing up from the miniature plastic chair.
The woman began to usher Zia towards the door, the history lesson with the kids was now over.

“Alright children,” Mrs. Mayfield sighed and pushed her glasses up the bridge of her nose, “say ‘goodbye’ to Ms. Noble.”

The kids did as they were told and the librarian was already motioning Zia towards the door, shooing her as if she were an intruding cat.  She hoisted her backpack over her jacket, hoping the knife she hid there didn’t clink against anything to give Mrs. Mayfield yet another reason to kick her out.  She loved coming to tell stories to the kids despite how often it ended like this.  Zia’s feet shuffled against the thin carpet as she made her way to the door.

“You’re going to be late,” Mrs. Mayfield smirked at her before glancing at the clock.  Zia followed her eyes to the wall and realized that the ceremony had already begun.  Much to the librarian’s annoyance, Zia swore rather loudly and dashed out the door.

Her bike wasn’t that far from the glass doors, but it seemed like a mile now that she was in a hurry.  Zia hopped on it and began to race down the street, careful to avoid traffic, when her phone began to ring.  With some careful maneuvering she got it from her pocket.

“Where are you?” Iscah hissed into Zia’s ear.  “The ceremony has already started and I just told your parents that you were already in line!”

“I’m on my way,” Zia shouted, narrowly dodging a large pickup.  It blared its horn at her and she yelled right back at it.  “Sorry Issy, I’ll be there though.  I’m like, five minutes away.”

“Well you better hurry because your mom already has her camera out; I think she’s on her second memory card.”

“That sounds about right.  I’ll see you there!”  Zia ended the call before her best friend could say anything else.  She was a soon-to-be Tracker, or Ventori to those that were part of a clan; dealing with a bit of rush-hour traffic was nothing.  Zia’s smile grew wider across her face, the summer breeze blowing her hair back.  Today was the beginning of her destiny, and nothing could ruin that.

It wasn’t long before Zia was leaping off of her bike and running for the auditorium of the New Havilan Community College.  She could already hear Principal Smithers calling out names as her heels clicked on the newly buffed floors.  She reached the huge wooden doors of the auditorium but stalled as her hand stretched towards the handle.

Glancing down at her attire, Zia didn’t think jeans and a tank top with matching army bag were appropriate for this occasion.  Her lips pulled towards her teeth when a noise caught her attention.

Wheels squeaked and echoed down the hallway, bounced off of the glass trophy case and towards Zia.  Her head swiveled around to find someone rolling a cart of costumes towards her; one black robe that hung on the rack was exactly what she needed.  As the janitor stopped at another wooden door, he began to jingle a roll of keys in his hands, searching for the right one.

“Hey,” Zia said, running up to him, wary that the Principal was getting dangerously close to her name.  “Can I borrow one of these?”

She ripped the costume from the hanger and threw it over her head before the man could refuse.  He didn’t seem to try though, just continued to look at his keys.  She tossed her bag into a corner by the trophy case, figuring it would be safe enough there.

The robe she wore was obviously made for someone much taller than
she and the edge of it pooled on the shining floor.  She quickly thanked the man and ran back to the doors of the auditorium, being sure to hold up the robe so she didn’t trip.

Taking a moment at the doors, Zia ruffled
up her hair, getting it to the perfect tousled look.  As she pushed the doors open with a little too much force, the Principal was just turning back to the microphone.

“Kehzia Noble,” he said into the thin silver
mic.  Zia glanced over at her classmates, hiding at the back of the room and awaiting their names to be called.  A few of them rolled their eyes at her, as did the parents and teachers.  The Principal peered over his glasses, unimpressed.  “I’m so glad you could make it to your own graduation.”

Everyone laughed, but that didn’t slow Zia down as she walked across the blood red carpet
of the auditorium.  With a big smile she said, “I know you are!”

She held the robe up and waved at her paren
ts in the sixth row from behind the students that had already been called on.  Her mother, the beautiful Win, was already snapping photos while her father, Cash, recorded everything.  Iscah was next to them, signing that Zia had cut it too close as she pointed at her wrist.  Zia couldn’t help but notice that a lot of the people there were giving her a strange, confused look as well.  When she made it to the stage and looked out over the crowd she understood why.

All of her classmates that had been called and those hiding at the back were wearing a navy blue robe, while she wore a black one.  She mindlessly shook the Principal’s hand and took her fake diploma from him.

“I’m amazed you survived this long,” he mumbled to her.

“Right back
at’cha,” Zia shot at him.  Principal Smithers inspected her costume as she walked away, the silence of the auditorium a little unnerving.

The steps down to meet the rest of the graduates creaked and moaned.  Zia shambled her way into a seat, right next to her least favourite person in all of New Havilan.

“Congratulations,” Hayden whispered to her, “but you won’t cut it as a Ventori with that punctuality.”

“At least I know the alphabet,” Zia hissed back at him, “last time I checked R was not in front of N.”

Hayden shrugged.  “What can I say?  I wanted to make sure I graduated before you.  Nice robe, by the way.”  His hand reached over and flipped up a hood Zia hadn’t known was there.  It pushed her hair forward, blinding her as more names were called.

Using jerking motions, she shoved it back, making sure to fix her dark strands; it was simple since there weren’t many of them.