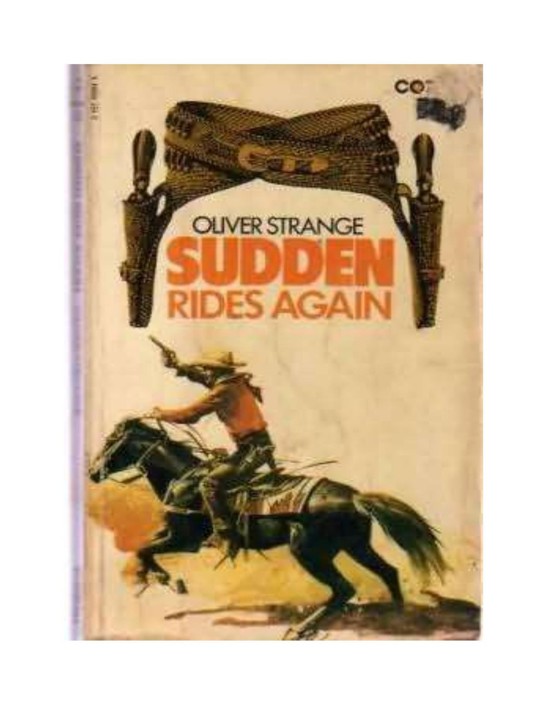 (Book 07 in the
Sudden Westerns series)

“It
may be that I’m sending you to your death.”

Ominous
words, delivered in a quiet, even tone by one to whom the masking of emotion
had become a habit. Short, stockily built, of middle age, attired in a suit of
sober black, with a “boiled” shirt and neat cravat, there was little to
distinguish him from the common herd. But looking into the shrewd grey eyes,
one realized the sound judgment, courage, and determination which had placed
him in authority. For this was Governor Bleke, of Arizona, a name respected,
feared, or hated throughout that lawless land.

The
whimsical question evoked a flicker of a smile on the Governor’s grave face;
the speaker had not the appearance of one to be easily frightened. The long,
wiry, narrow-hipped, wide-shouldered frame, clean-cut, tanned features, level,
spaced, grey-blue eyes and firm jaw, all proclaimed that here was one with whom
it would be unwise to trifle. Two guns, hanging low on his thighs, the holsters
secured to his leather chaps to ensure swift withdrawal, supplied a further
warning. His range-rider’s garb was plain and serviceable.

For
a moment the elder man was silent, studying his companion, noting the curious
glances at the shabby parlour, which was the best accommodation he had been
able to find in the primitive little settlement dumped down in a waste of
sagebrush desert.

“Wondering
why I wanted you to meet me here, Jim?” he asked, and without waiting for an
answer, “Well, Tucson would have been too risky—my movements are watched—and it
is important to my purpose that your connection with me should remain a
secret.”

The
cowboy smiled as he recalled the directions he had received: he was to be at
Sandy Creek on a day named; in a saloon bar he would meet a “stranger,” who
would challenge him to a bout of poker, for which they would adjourn to the
so-called hotel.

“I
sorta guessed yu wouldn’t travel a hundred miles to this dog’s-body of a town
just for a hand o’ cards,” he said.

“No,
it’s a much more serious game and the stakes are high,” Bleke replied. “You may
lose your life, and I—a friend.”

A
gleam of appreciation shone in the Governor’s eyes, but what he said was,
“Damnation, I knew it, and I hate to ask you, but I believe you’re the only man
who can put it across.”

“Shoot,
seh,” the other invited coolly.

Bleke
lit a cigar, rolled another over the table to his guest; and, after a few
contemplative puffs, began:

“There
is a man in north-west Arizona who is defying me, the law I represent and was
appointed to enforce; he has to be dealt with.” His keen gaze was on the
younger man’s face, but it told him nothing. “Have you heard of Hell City?”

The
cowboy’s eyes widened just a fraction. “Word of such a place has come to me,
seh,” he said.
“Sorta hideout where a desperate man can find
a welcome an’ safety, no matter what he’s done.
I set it down as just a
tale for a tenderfoot.”

The
Governor’s face was grim. “Unfortunately, it is a true tale,” he replied. “It
accounts for most of the outrages in that part of the Territory and for the
continued existence and activity of some most undesirable citizens.”

“Yes,
but that doesn’t help much. Hell City has been described to me as a walled
fortress which would need an army and artillery for its capture; I have
neither. From it, bands of armed ruffians raid and rob in every direction, and
for a hundred miles or more the country is in a state of terror. When
complaints first began to come in, about a year ago, I sent a man to
investigate. For months I had no news, and then he came back—in a coffin.
Pinned to his breast was a jeering note inviting me to try
again.
”

The
Governor’s voice hardened. “No, the challenge was unnecessary,” he went on. “I
sent again, and now I have—this.” He passed over a sheet of paper and the
cowboy read:

DEAR
GOVERNOR, your second spy was as clumsy as his predecessor. I shall return him
when he ceases to be useful. He makes a fine target for pistol-practice, as the
enclosures will show. Why not send a good man?

“That
is the fantastic title this master-brigand has assumed,” The Governor
explained. “His followers he calls `Imps,’ and their vengeance is so feared
that no man dares to offend one of them.”

The
cowboy was still studying the document. The writing was neat—that of an
educated person—and the signature flaunting in its bold freedom. The callous
ferocity, however, raised a doubt.

“Mebbe
he’s just puttin’ up a bluff,” he suggested.

“The
enclosures were ears; a pair, perforated by bullets,” Bleke replied. “Well, if
it’s a bluff, I’m calling it. I’ll send a good man—my best—if he will go.”

“Third
time lucky,” the other smiled. “
Them
ears has kinda
got me interested.”

The
Governor’s expression remained grave. “Thank you, Jim,” he said, but his tone
betrayed a lingering reluctance; the very readiness of this
reliant
young fellow perturbed him, though he had depended upon it. “You don’t have
to,” he continued. “Think it over. This is a dangerous job; the man is reputed
to be a marvellous shot.”

“King
Burdette an’ Whitey didn’t waste much lead neither,” came the reminder, a
reference to a previous exploit’ which brought a ghost of a smile to the older
man’s lips.

“Oh,
I know you can shoot, boy,” he said, “but there’s more than gun-play in this.
The soundrel is clever and well organized. You’ll need to play your cards
mighty close, but there will be an ace amongst them which may turn the trick.
Can you guess what it is?”

“Exactly,
this is one time when your bad reputation should help us. The others failed
because, in some way, it became known they belonged to me, but I doubt if even
the devil
himself
would suspect me of employing
`Sudden,’ a noted outlaw, wanted for robbery and worse in Texas. It is more
than likely that this Satan fellow will welcome you; join his band and gain his
confidence.”

The
cowboy’s face bore a bitter expression. “I guess that won’t be difficult,” he
said. “He’s the on’y sort that has any use for me.”

The
Governor nodded soberly; he knew something of the story of this black-haired
young man who called himself “James Green,” but was more widely known as “Sudden,”
a name already beginning to rank with those of the great gunmen of the West for
daring and dexterity with his weapons.

Though
he had no proof, he was convinced that the charge which had put a price on the
youth’s head was unfounded. “I’m using you, Jim,” he said quietly.

“Nonsense,
I got me a good man, that’s all,” Bleke rejoined hastily—he had all the Westerner’s
aversion to being thanked—adding, with a dry smile, “and I’m doing my best to
lose him.”

“Shucks,
I’ll make it,” the cowboy said, with a confidence which was in no way
boastfulness. “I can’t get over them ears; sort o’ caper yu might expect from a
Greaser, but yu say he’s white.”

“His
skin, yes, but his soul must be as black as the Pit,” the Governor replied.
“But he has a brain, a madman’s, possibly, but the more cunning on that
account. Move cautiously, Jim; remember that he’ll suspect every stranger of
coming from me, so don’t show any eagerness to join him. I’m guessing that is
where both my fellows slipped up, though I warned Dolver—the second—against
it.”

Sudden
smiled sardonically. “Governor, I never knowed any parents,” he said. “I was raised
by redskins, an’ the first thing they taught me was how to walk in the water.
Mister Satan will have to ask
me,
an’ mebbe more than
once—before I throw in with him.”

Bleke
nodded approvingly. “I expect I can leave you to make your own plan of action.
All the same, I wish I didn’t have to send you, but you’re my best bet, and
this snake has to be scotched. Also, I’m worried about Dolver.”

“Any ranches around there?”

“Several,
and, of course, they are losing stock. The biggest appears to be the Double K,
owned by Kenneth Keith. The nearest settlement is a place called Dugout.”

The
older man smiled and shook his head. “Not quite, I think,” he replied,
producing a bag which clinked musically as he set it on the table.
“Golden bullets, Jim.
you’ll
need
them; sometimes they’re even more effective than those you feed to your gun.”

“I
got money,” the cowboy objected.

“Glad
to know it, but you’re working for me. Also, you are about to make war, and
that can’t be done without a well-provided pocket. That’s all I can do except
give you a free hand: clean that gang up if you have to shoot every crooked
scamp in it.” The grey eyes were hard as granite, the firm lips clamped like a
vice. “I’m wishing you luck.”