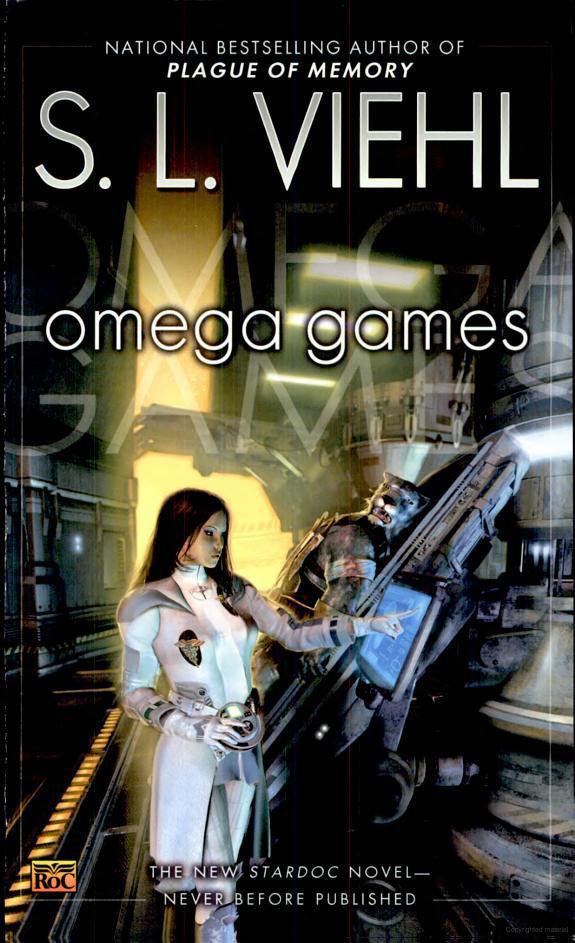 For Frank Frazetta, whose incredible art opened my eyes to a universe of possibilities.

I would like to thank Joely Sue Burkhart for naming
Moonfire
, and for providing a much-needed kick in the muse for me.

“The deviation of man from the state in which he was originally placed by nature seems to have proved to him a prolific source of diseases.”

Grey Veil, a bioengineered clone, appears to be a typical Terran female (see embedded images). Educated on Terra as a cardiothoracic surgeon, the organism escaped custody and fled her creator, the late Terran physician/medical researcher Joseph Grey Veil. While serving as trauma physician to the multispecies colony on Kevarzangia Two, Grey Veil applied for and was denied sentient status by the Allied League of Worlds (reference SSD case #4165998-K 2-GVC). The organism subsequently sought and was granted asylum by Jorenian HouseClan Torin.

Grey Veil is a highly intelligent and manipulative life-form, implicated in causing the Kevarzangian colonial Responders should transmit all related data, signals, and scans to inquirer via OTR FTE obdistr relay; mark S/CGV-LAS 0451 and date. Information directly leading to the location and apprehension of Grey Veil will be rewarded with a level-one bounty fee of four million stan credits.

WARNING: To date Grey Veil has successfully evaded or escaped ALW and Faction custody. She was last known to be traveling under the protection of Duncan Reever, former Hsktskt spy and telepathic linguist, as well as an entourage of battle-trained Jorenian warriors. Grey Veil and her companions are considered extremely dangerous and should not be directly approached or contacted without appropriate forces and safety measures.

That was a very good question.

I looked up from the chart I was reading and waited to see if the tall, broad, blue-skinned Jorenian male on the other side of the berth had anything more to say. His people, I knew from experience, talked a great deal. When his hands went still and he glared at me with his all-white but still functional eyes, I assumed he had finished. The style and color of his tunic, like my own, indicated that he was this ward’s senior medical healer.

His patient’s condition indicated that he wasn’t a very good one.

“I am a visiting physician. A nurse on this ward indicated this patient was in some distress.” I saw no reason to further identify myself or explain the situation. Every time I did, the subsequent reactions of those around me made it impossible for me to do the work. “Was it your decision to treat this female’s condition with only native dermal emollients? ”

“I do not discuss my treatments with outsiders.” His hands moved to accompany his words with cutting bluntness. “We care not for Terrans interfering with our kind. Put down that chart and leave this facility now.”

I ignored his hostility toward Terrans as well as his orders, and focused instead on the patient between us. The female lay unconscious, a bleeding rash marring every inch of her pale blue skin. Monitors showed her vitals were slowing, and notes on the chart told me that she had proven unresponsive to conventional antibiotic therapy.

This might be the homeworld of my adopted family, and the natives here important allies, and we all might be dead five minutes from now, but those were not reasons to excuse diagnostic incompetence.

“You did not perform abdominal scans or take a personal history. Nor did you contact her HouseClan to inquire as to the origins of her illness.” I would have to note this on the chart and later discuss improving Jorenian triage and assessment procedures with Squilyp, HouseClan Torin’s Senior Healer. Providing that we survived treating this patient, of course. “What is your name?”

“I am Tarveka, ClanSon Zamlon, attending healer,” he snapped back. “As for this female, she was admitted in a state of delirium, and has since been incapable of coherent communication. The skin rash The rash had distorted the outlines of the patient’s birthmark, turning it into a black smear. “What
did
you do for her?”

“As she is suffering from dermatitis, I performed a dermal scan and took some tissue samples for culture. The results should be back from our forensic lab tomorrow morning.” He made an impatient gesture. “Have you nothing better to do than disrupt this ward with your uninformed inquiries?”

I was tempted to point out that his shouting had disrupted the ward far more than my evaluation of his patient, but the greater problem occupied the berth. I almost felt grateful for his initial, inaccurate assessment and the manner in which he had bungled her treatment. He’d probably saved his own life as well as the patient’s, and those of everyone else on the ward.

“This female’s condition will not be resolved by skin treatments.” I switched off the chart display and met his antagonistic gaze. My knees wanted to buckle, but this was not Akkabarr; I no longer had to prostrate myself before angry males. In fact, my new life gave me the right to challenge them. “Do you wish to assist me, or is defending your original, erroneous diagnosis of more importance to you?”

“What say you?
Assist
you? Think you that I am a nurse?” Dark color flushed the skin of his face, and the elegant lids around his all-white eyes narrowed. “You deliberately insult me.”

“Only if you are correct about this patient’s condition, and I am not.” I displayed some of my teeth. “Fortunately, you are not.”

We both turned as a one-legged Omorr male hopped over to the end of the berth. HouseClan Torin Senior Healer Squilyp’s dark pink skin, three upper limbs, and long, white, prehensile facial tendrils formed a colorful contrast to the uniformly blue-skinned, black-haired Jorenians around us. So did his scowl, which he directed at me.

I aggravated Squilyp, but then, I did the same to a lot of my new friends.

The Omorr had brought me with him to the facility this morning to, in his words, “keep me out of trouble.” My husband, Duncan Reever, and our adopted Jorenian family, HouseClan Torin, were presently meeting with planetary security officials to brief them on matters of intergalactic importance. That was how they referred to any matter concerning me.

I did not wish to be on this world or among these people. I had no desire to be of importance on a galactic, planetary, continental, or even provincial scale. If no one ever paid any attention to me again, it would not upset me. I simply longed to be with Reever, the only one who truly understood me.

I should have been with him. We had time now to begin our investigation of the mysterious black crystal that my surrogate mother, Maggie, claimed was spreading like a cancer through our galaxy. Reever had already contacted an old Terran comrade who had promised information about the Odnallak, the last survivors of the race that created the black crystal.

Also ever present on my mind were the results from the latest series of medical tests I had performed on my husband. Reever did not yet know that the chameleon cells in his body, which had twice repaired fatal injuries he had received, had also infiltrated every organ in his body.

“Doctor?” Squilyp prompted, tugging me free from the snarl of my thoughts.

“I have disagreed with this healer’s assessment and treatment of this patient,” I told the Omorr as I offered him the chart. “He regards my professional opinion as a personal insult. We must move quickly to treat this female—”

“She is ignorant and insolent,” Tarveka said, interrupting me. “She insulted me, and while I am not Torin, I do not need some bigoted offworlder provoking me into a declaration of ClanKill.”

“You
have
been busy,” the Omorr said to me.

“I want this Terran removed from the ward,” Tarveka said, drawing himself up with great dignity. “At once.”

Being labeled as a Terran annoyed me. Although Terra was my natal world, I knew little of it or its native inhabitants. They were said to be isolationists and xenophobes, obsessed with themselves and maintaining genetic purity.

My body might appear Terran in form, but I was hardly human. I wasn’t even the original occupant of my body; I had been born to it on Akkabarr after point-blank gunshot wounds had destroyed my former self’s mind. I came to life on the day that she died, and was made one of the Iisleg, the people of the ice. Our ancestors had been abducted from Terra and brought as slaves to Akkabarr, but the only thing we had in common with Terrans was our DNA.

I was Jarn of Akkabarr, not Cherijo Torin of Terra.

Her name in my mind made my stomach clench. The Iisleg never spoke of the dead. They belonged to the Gods.

I did not relate any of this to Healer Tarveka. Trying to explain my existence, previous identity, beliefs, and present state of consciousness to a stranger often took hours, and usually required some visual aids. Besides that, if we didn’t deal with this patient, and soon, she and everyone on this ward were going to die, including us.

Now I simply had to relay that to these males without sending them both into uncontrolled hysterics.

Squilyp took the chart and scanned the display. “Senior Healer, do you know who this Terran is?”

“Squilyp,” I said. “We do not have time to waste on trifling matters. Please don’t.”

“You are acting like an Iisleg again.” To Tarveka, the Omorr repeated, “Do you know who she is?”

Tarveka made an impatient, negative gesture.

“In addition to being a member of HouseClan Torin and the Savior of Varallan,” Squilyp said, “the chief physician in charge of rebel forces during the Akkabarran Insurrection, and the named blood kin of TssVar, the new Hsktskt Hanar, she also happens to serve as a member of the Ruling Council of Joren.” He paused for a moment to enjoy the stunned look on the Jorenian’s face. “May I introduce Dr. Cherijo Torin?”

Trust Squilyp to condense my two lifetimes into a handful of words. I watched most of the healthy dark blue color fade from the Jorenian healer’s face, leaving it taut and chalky-looking. “You did not mention “I will remember to,” the Omorr assured me, “the next time you try to provoke someone into declaring ClanKill.”

“Healer . . . Torin.” Tarveka seemed to be out of breath. “Your pardon. I—I had no idea you would . . . that you . . .” He shuffled back several steps, thumped himself in the chest, and gestured toward the patient. “Please. I would be honored. I will follow. Ah. Any advice, of course. Please.”

DarkPrairieFire by Arthur Mitchell
The Good Luck of Right Now by Matthew Quick
The Ghost's Grave by Peg Kehret
The Faceless One by Mark Onspaugh
Protecting Rose by Yeko, Cheryl
All the Way by Jordin Tootoo
Never Trust a Bad Boy by Minx Hardbringer
The Front Runner by Patricia Nell Warren
The Magic Wakes by Bradford, Charity
Some Other Garden by Jane Urquhart