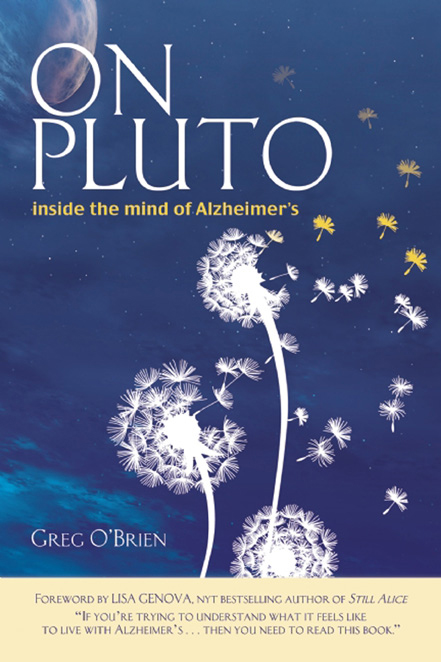 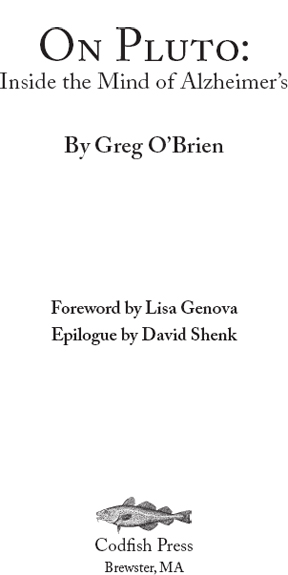 In Praise of
On Pluto: Inside the Mind of Alzheimer's

“Told with extraordinary vulnerability, grace, humor, and profound insight,
On Pluto
is an intimate look inside the mind of Greg O'Brien, a journalist diagnosed with early- onset Alzheimer's. But the real gem of
On Pluto
lies in its unflinching look inside Greg's heart. If you're trying to understand what it feels like to live with Alzheimer's, and you are because you're reading these words, then you need to read this book.” â
Lisa Genova,
New York Times
best selling author of
Still Alice

“In
On Pluto
, Greg O'Brien has given us a priceless gift: an honest, funny, heartbreaking, and powerfully poignant look into the world of an Alzheimer's sufferer by a man who lives with it. Greg O'Brien is a brilliant observer and superb writer, and he is at the top of his game in this book. It's as if he has willingly dropped himself into a kind of mental tornado, so that he can tell us what he sees from inside. You have never read a book quite like it, and probably never will again.” â
William Martin,
New York Times
best selling author of
Cape Cod, Back Bay,
and
The Lincoln Letter

“Greg O'Brien writes with the consummate knowledge of a guide and the courage of a pioneer. In this important and transcendent book, he serves both roles as he folds back the veils of fear and traverses the treacherous territory of early-onset Alzheimer's.
On Pluto: Inside the Mind of Alzheimer's
glows with honesty, intelligence, and compassion, and, given the subject, is a surprisingly spirit-renewing book.” â
Anne D. LeClaire, author of best selling
Listening Below The Noise, Leaving Eden,
and
The Lavender Hour

“Most sufferers of early-onset Alzheimer's do their very best to hide it from everyone, sometimes even themselves. Greg O'Brien has chosen to look the beast in the eyes, and give us a candid, unflinching portrait of his family's tragic history of the disease, as well as his own determination to not go down
without a fight.” â
Steve James, producer of the short film
“A Place Called Pluto”
and considered among the most acclaimed documentary producers with noted works:
Hoop Dreams, Life Itself, Stevie, The New Americans, The War Tapes, At the Death House Door,
and
The Interrupters

“Alzheimer's messed with the wrong man. If there's anyone who can stand up to this awful disease with the right blend of eloquence, anger, and honesty, it is the defiant and profound Greg O'Brien. This book is a beacon of hope for anyone who can read or listen.” â
David Shenk, author of
The Forgetting
, a
New York Times
best seller, and creator of
Living With Alzheimer's
film project

“Greg O'Brien's daily movements now include, he tells us, periodic trips to Pluto, a dark and distant planet off the grid of enduring memory. But Greg's story of his life has mapped for us an inner space that is as light and present as Pluto is bleak and lonely. The courage of this book lies in the way that Greg speaks his peace into the dark. The hope of this book lies in the way that the dark, in the least expected of moments, seems to be listening to Greg, in inextinguishable love.” â
Michael Verde, founder, Memory Bridge, The Foundation for Alzheimer's and Cultural Memory

“Greg O'Brien takes us on a personal journey into Alzheimer's disease and marks the trail for others traveling this treacherous path. At once fighting and accepting his fate, he eloquently describes the delicate balance between living and dying with this mind-robbing disease. As his mind fails and his wisdom grows, he is teaching us to defy the popular notion that memory is everything.” â
Daniel Kuhn, MSW, author of
Alzheimer's Early Stages: First Steps for Family, Friends, and Caregivers

“Never before have we been offered such a clear understanding of how Alzheimer's disease affects day-to-day perceptions. Greg O'Brien's first-hand account of his own disease process will force us all to rethink the way we deliver care, and is a must addition to the libraries of all professional and family caregivers.” â
Suzanne Faith, RN psych, Clinical Director, Hope Dementia & Alzheimer's Services

“As a clinician working daily with families and individuals dealing with Alzheimer's and dementia, the question we most often grapple with is how does one live well with the disease? Greg O'Brien's book,
On Pluto: Inside the Mind of Alzheimer's,
offers an answer rich in wit, courage, and a precision of detail that makes the book not only informative, but an extremely satisfying read. For the 5.4 million American families currently dealing with dementia, and for those of us who serve them,
On Pluto
is a critical and groundbreaking book. We are fortunate to have Greg's voice and spirit among us; he is a true American hero.” â
Dr. Molly Perdue, PhD, Director of Family Services, Hope Health of Cape Cod

“Greg O'Brien's personal battle against Alzheimer's is an everyman's fight; he is the quintessence of the lead character in the epic Alzheimer's novel,
Still Alice
. O'Brien, through faith, humor, and journalistic grit, is able, like a master artist, to paint a gripping, naked word picture of this progressive, chronic disease for which there is no cureâa sickness that will swamp a generation. O'Brien bluntly offers Baby Boomers and generations to come a riveting guide of how to live with Alzheimer's, rather than dying with it.” â
Alisa M. Galazzi, co-founder of Dementia Care Academy, former Executive Director, Alzheimer's Services of Cape & Islands

1. A Place Of Recall

4. Heading Out to Pluto

To my mother, Virginia Brown O'Brien, whose courageous battle with Alzheimer's taught me how to stand firm in faith against a demon of a disease. 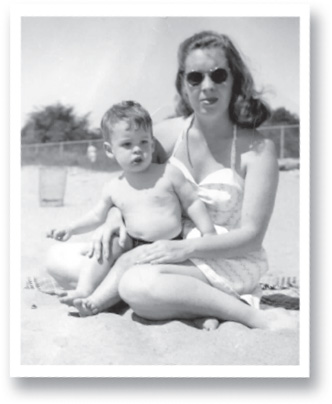 E
very story has a beginning, middle, and end. I met Greg O'Brien somewhere in the middle. I received an email from him the end of March 2011. He introduced himself as a journalist, a fellow Cape Codder, someone who knows my husband and his documentary film work, and a fan of
Still Alice
.

It was an email aimed to woo and impress me, and just as I was thinking this, I read:

“Don't be overly impressed by the articulation of this email. It took about two hours to write. Years ago, I would have written this in five minutes or less. But it was worth the time.”

Like his mother and maternal grandfather before him, Greg had been diagnosed with early-onset Alzheimer's. He wanted to know if we could meet and talk. I get this kind of email a
lot and do my best to offer an ear, encouragement, advice, and connections for further support. It's typically a sincere but brief relationship, most often limited to a few email exchanges. I had no idea when I agreed to meet Greg that he'd be on my mind pretty much every day since, that he'd become a close friend and personal hero.

Since I've known Greg, he's been fighting through the drifting fogs of dementia, determined to press on, drawing on everything he isâbrilliant journalist, adoring and faithful family man, generous and lovable Irishman with a great sense of humor, masterful storytellerâto write
On Pluto
. Greg is the author of four Cape Cod-related books, and has won many prestigious awards for journalism over a 30-year career, but I believe this book is Greg's greatest achievement and contribution, not to the cure for Alzheimer's (at least not directly), but to our understanding of how to live and love in the presence of Alzheimer's.

In his own words, “While I have the facility to do so, I want to communicate to others, to those who will face this demon some day and those who love them, that with the proper medical direction, life strategies, faith, and humor one can prevail in the moment and lead a productive life for as long as possible.”