Read On the Meldon Plain (The Fourline Trilogy Book 2) Online

On the Meldon Plain (The Fourline Trilogy Book 2) 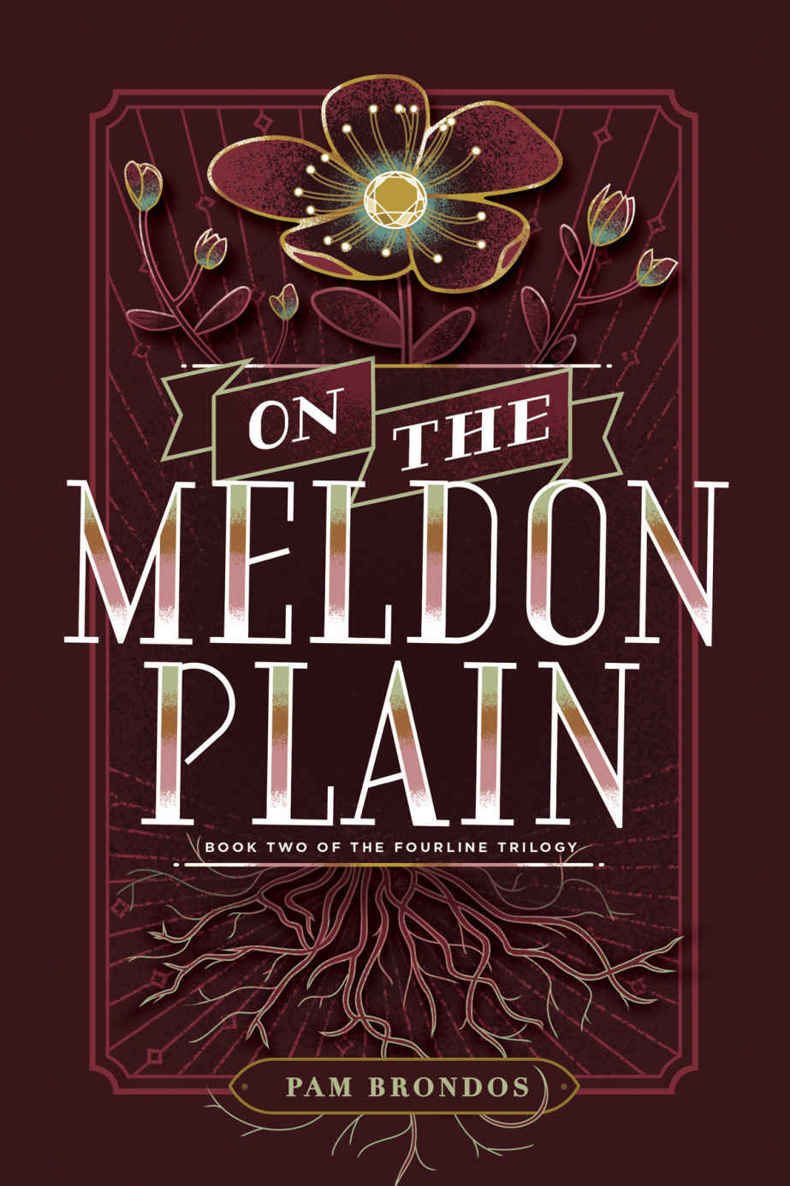 Amazon, the Amazon logo, and Skyscape are trademarks of
Amazon.com
, Inc., or its affiliates.

The sky reminded Nat of stone.

She turned onto a side street, running in the middle of the road to avoid the ice patches and clumps of snow covering the sidewalks. She passed a row of dilapidated Victorian houses. Smoke curled from their boxy chimneys and blended into the gray sky.

Late afternoon traffic poured onto the street. A dirty yellow truck missed hitting her by a few inches, and the driver slammed on his horn. She jumped over a sheet of ice, skipped onto the sidewalk, and continued her steady pace without giving the driver so much as a glance. Her feet fell rhythmically as she ran block after block. Each breath brought an icy ache of air into her lungs.

At the red metal bridge spanning the Cannon River, she turned onto the limestone riverwalk. She tore down the walkway, scattering pigeons and winter crows. Restaurants, shop fronts, and offices flashed by. Her lungs and legs burned, distracting her from the pulsing pain of her shoulder wound.

A second bridge came into view. Intricate circles reminding her of the vine pattern twisting up her forearm swirled around the railing. She glanced at the tip of the vibrant vine and spear peeking from underneath her sleeve. The pattern had yet to fade as Sister Barba had promised. Instead, since her return from Fourline, its hue had only deepened, just like her guilt over Soris. She sprinted to the bridge, rapidly moving her legs and arms and pushing away thoughts of her Sister markings and her friend.

When Nat reached the bridge, she quit running. She pressed her hips against the cold metal railing and watched the river flow toward her. Water rushed around ice sheets, creating little clusters of dull bubbles. She gently massaged her shoulder, avoiding the center of the wound as she followed the course of the water with her eyes.

The river snaked past the bridge, auto repair shops, industrial buildings, and a warehouse fronted by a stucco building. A sign reading “Gate’s Costumes” hung from the front of the stucco structure. Nat pushed her green knit cap off her forehead and wiped the sweaty strands of brown hair from her brow. She watched the costume shop sign flicker on and off in the gray afternoon light.

Two months had passed since she’d pushed through the membrane tucked deep within the cliff wall behind the costume shop, leaving the world of Fourline and the Nala behind, but bringing her wounded friend Soris through. Her skin crawled as she remembered the humanoid Nala, with its lancing forelimbs and spiderlike fangs, slashing her shoulder and biting Soris. She placed her hands on the railing, the numbing cold surging through her fingers as memories of her quest into Fourline tumbled through her mind.

She’d ventured through the portal to Fourline to help Estos, the realm’s young king, leave the safety of his exile in her world and return to his own. Estos’ loyal rebel band needed him to lead the fight against Lord Mudug, the corrupt usurper who’d ordered the murder of Estos’ sister, Queen Emilia. Nat had donned the garb of a Warrior Sister so she and Soris could destroy the Chemist’s tracking device and create a safe passage for Estos’ return to Fourline. But Soris had paid a price for accompanying her. She could blame only herself for not having protected him from the predatory Nala. Her journey with Soris had taught her that the Nala could turn humans into halflings called duozi with one bite from their venomous fangs. Unaware she wasn’t a real Warrior Sister, Soris had trusted in her ability to keep them both safe.

Nat shook her hands and cupped them around her lips, blowing warmth back into her fingers as she thought of all the things she’d done wrong in Fourline. Failing to take Soris straight to the membrane after the Nala bit him was her biggest mistake. The skin around his wound had already turned blue like the Nala’s by the time Annin helped pull his body through the resistant membrane. Nat hadn’t brought Soris to Ethet, the Healing Sister who lived in her world, fast enough to curb his transformation into a duozi.

What exists in only one of the worlds cannot exist in the other.
Her guilt deepened as she thought of Estos’ words to her. He’d said Soris wouldn’t survive in her world, that the Nala venom had progressed too deeply through his body for him to remain on this side of the membrane. Sister Ethet told her he’d have to return to Fourline, where Nat knew he’d be condemned to live the life of a duozi, targeted by both the Nala and the humans prejudiced against halflings.

Nat’s legs, stiff from the sudden rest, cramped when she turned toward campus and ran away from the blinking “Gate’s Costumes” sign. Hot tears, turning cold in the frigid temperature, streamed down her face.
I know you’re gone, Soris,
she thought, feeling the familiar emptiness eating away at her. She brushed her arm across her eyes, and a sting of pain ripped down her shoulder to her arm.
You’re gone, except in my nightmares.

“How many is that today?” Viv, Nat’s roommate, glanced up from her sketchbook. She scratched her face, and a black smudge appeared above her nose.

“How many what?” Nat carefully pulled her thin fleece sweatshirt over her head. An oozy gray stain from her weeping shoulder wound marred the fabric. She turned her body, keeping her shoulder away from Viv’s line of sight, and tossed the garment into the laundry basket. She gingerly touched the loose bandage taped to her shoulder.

“Miles, kilometers, leagues, rods,
li
, minimarathons.” Viv dropped the sketchbook on the floor and lifted herself out of the striped chair. Her blue hair was arranged in tiny topknots.

“You’re evading my question, and I know for a fact you don’t think my hair looks cute. The last time I wore it like this, you said I looked like a pincushion with zits.”

“Your hair was red then.” Nat shoved her head through the neck hole of a clean shirt, wincing when she brought her arm above her shoulder.
I’ll rebandage the wound later,
she thought as Viv babbled in the background. Nat grabbed her new computer and slid it into her backpack.

Viv watched Nat change socks and slip on a pair of leather boots, her tangled brown ponytail skimming the floor when she tied the laces. Nat looked up and knew she wasn’t going to escape the room easily, not without a roommate interrogation. Viv crossed her arms and leaned against the door, barring her escape.

“Three miles this morning and three this afternoon. That’s how far I ran today,” Nat responded.

“Are you kidding me?” Viv’s brow creased. “Have you looked at yourself? I don’t know how much weight you’ve lost since you got back from January term, but your clothes are hanging off of you and your face is all . . . sunken looking. If you’d J-termed in the tropics and picked up a tapeworm, I’d get it, but you were in Canada, so what’s the deal?”

Nat stared at her roommate. If she had really been in Canada, everything would be different. She felt the tears well in her eyes and looked at the floor, pretending to struggle with her laces.

“You’re right. I need to eat more. I’ve just been busy.” She wiped her eyes, stood, and grabbed an apple from a dark-blue bowl on top of their minifridge. She took a bite. “I’ve got to get to my lab. I promise to eat dinner after.”

Viv stepped away from the door. “You won’t grab dinner after lab, because you’re coming to Butler’s. It’s his birthday, remember?”

“A night with a bunch of inebriated artists. Looking forward to it.” Nat took another bite to placate her roommate and lifted her jacket off the coat hook with her good arm, thankful Viv had yet to notice how left-handed she had become.

Viv plopped back into the chair. “It’s the best company you’ll get smelling like that.” She scrunched up her nose. “You’re turning me into a nagging roommate, Nat! Take a shower and eat, and you’d better be at Butler’s by ten or I’m coming to find you,” she threatened.

Nat slammed the door behind her. The late March wind stung her face as she plowed through the dorm’s heavy doors. The half-eaten apple pinged against the side of the metal garbage can next to the entrance and landed in a clump of dirty snow. She buttoned her coat and walked with her head down, passing through the parking lot toward the Student Center. Safety lights shone brightly on the cars. She looked up, searching for a distraction from her thoughts and the pain in her shoulder.

Yellow light illuminated the wide first-floor windows of the Speech and Theater Building set behind the Student Center. A figure moved into the light of one window, and Nat halted. Sister Barba, the Wisdom Sister from Fourline who had drawn Nat’s markings on her arm before sending her through the membrane, passed in front of the window. Nat veered away from the path between the two buildings. Her guilt over Soris was already ever present in her mind. With her shoulder wound and markings, she needed no more reminders of her quest.
It’ll get better,
she told herself.
I’ll forget all of them. I’ll forget Soris. My wound will heal.

The Science Center loomed in front of her. She pushed open the glass doors and slowly climbed the stairs. A rush of students brushed past her. Someone’s backpack slammed into Nat’s injured shoulder, and she bit down on her tongue to keep from crying out in pain. She climbed the remaining stairs and leaned against a window, pressing her hot forehead against the cool glass. When the pain subsided, she walked into the lab. A graying sunset filtered through the lab’s floor-to-ceiling windows. The fading light left her with an unsettled feeling. Night brought no rest, only more nightmares.

Signe, her lab partner, looked up from their assigned table. Nat dropped her bag and jacket next to a metal stool, grabbed a pair of goggles, and pulled out her lab book.

“Testing for micronutrients, right?” she asked her partner.

“Yeah,” Signe said. Standing a foot taller than Nat, she pulled her white-blonde hair back into a clip and pointed at a small container of seeds. Nat reached for the container.

“What’s your rush? The teaching assistant isn’t even here.”

“We should check for copper, too, along with the other micronutrients,” Nat replied, thinking the copper test would take an extra half an hour—time she could use to focus on something else other than Soris, her shoulder, and her nightmares.