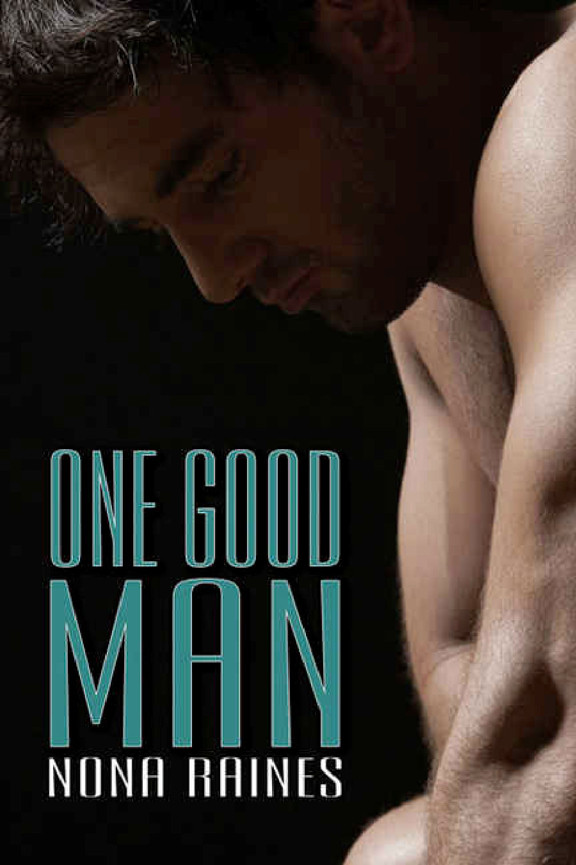 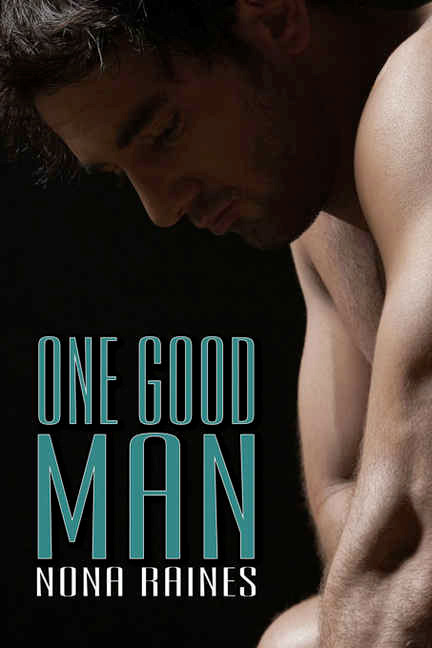 This is a work of fiction. Names, characters, places, and incidents are either the product of the author's imagination or are used fictitiously, and any resemblance to actual persons living or dead, business establishments, events, or locales, is entirely coincidental.

All rights reserved. No part of this book may be used or reproduced in any manner whatsoever without written permission of the author or The Wild Rose Press except in the case of brief quotations embodied in critical articles or reviews.

Published in the United States of America 5

Dedication
For my family

and with many thanks to Denise Como.

"When librarian Andie Benedetto gets caught peeking through her dad's window at hunky landscaper Matthew Vostek, her once-normal world spins out of control. In
One
Good Man
, author Nona Raines excels at snappy dialogue, and draws the reader into the action—and the hot sex.

I can't wait for the release of the second Vostek brothers novel,
Take This Man
. Raines definitely has a place on my

~
Danica St. Como
, author of
In Her Lover's Arms

Andie never intended to watch the man next door.

It all happened because she couldn't sleep. Tired of kicking around her tangled sheets, she'd risen out of bed to go to the kitchen for something to drink.

She didn't need to turn on the light. The suburban split-level was the home she grew up in, though now she was here dog sitting while her father was away. Feeling her way in the dark, she slipped down the hallway. Past the closed door of the bedroom that used to be her parents', but now belonged to her father. Past the bathroom, down the steps, and past the living room where Daisy snored on the sofa.

Clicking on the kitchen light, she took a glass from the cupboard and some orange juice from the fridge. When she glanced out the window above the sink, she saw him.

Matthew Vostek. Sitting on his back steps with his two dogs.

A brown-spotted pit bull sat companionably by his feet while a small white one snuffled in the grass.

She thought of that old song, "Moonlight Becomes You." It certainly became Matthew, highlighting his handsome profile.

But she needed a closer view.

Her thirst forgotten, Andie set the juice carton aside and edged up to the sliding glass door looking out on the garden that used to be her mother's pride, but was now weedy and wild. Beyond the deck it gave a view of the neighbor's yard
and
of the neighbor himself.

Keeping herself hidden against the wall, Andie tilted her head enough to glimpse him through the glass. She caught her breath. His plain dark T-shirt covered a torso which, while not muscle-bound, was well developed and broad, tapering to a narrow waist. His arms were well defined. Andie crept closer to the glass. She swallowed hard as her gaze followed him lifting a bottle to his lips and tilting his head back to drink.

It was a warm May evening, pleasant enough to be sitting out. Was he just hanging out with his canine buddies at the end of a long day? Or did he, like Andie, have troubles on his mind that kept him from sleep?

Whatever he was doing, Andie wished she was beside him, sitting on the steps and hanging, instead of inside this lonely house with its sad memories.

She'd prefer his company to being alone and worrying about how her father was coping with her mother's death.

Wondering what her boyfriend Douglas meant by telling her he "needed some space." Were they still a couple? Had they broken up, or what?

Her life was falling apart.

Andie already knew quite a bit about Matthew without having said more than a few words to him. They'd exchanged friendly greetings whenever Andie stopped by to visit her dad and he happened to be around. Of course she noticed how good-looking—no, scratch that, how
hot
—he was, but she'd made no effort to prolong their conversations. First of all, she'd been living with Douglas—until he suddenly out of the blue decided to move out because of the needing space thing.

Secondly, well, Andie didn't trust the man. Matthew was too 9

good-looking. Too hot. The kind of man who had to be a player.

Still, that didn't keep her from soaking up the interesting tidbits of information the neighborhood gossips offered.

She knew he and his brother ran a lawn and garden business, which accounted for his broad shoulders and well-defined arms as well as his suntan.

She knew he was single. She knew he'd planned to move in with a girlfriend,
a fiancee
. But something had gone wrong.

Matthew arrived and the fiancee never showed. Opinions varied. No one definitely knew the cause of the break-up.

Andie's guess was he was one more guy who couldn't keep his pants zipped.

Her mind told her all this, but did her body care? Not a chance.

Inching forward, Andie imagined taking the bottle from him and bringing it to her mouth, placing her lips exactly where his had been.

She moistened her dry lips. Whatever was in that bottle—

beer, pop, or iced tea, she'd press her lips to his and share the drink with him. She'd give him open-mouthed tongue kisses, lick down his chin, his throat, his chest. Then she'd pull his T-shirt up until it bunched under his arms, swirl her tongue around his nipples, suck them, and bite them.

She clenched her thighs together as desire throbbed lower, thrumming like a heartbeat. If she'd been wearing panties, they'd have been wet. Instead, a trickle of moisture ran down her thighs. Andie ached to take off her nightgown and flatten her naked body against the cool glass.

She had to be crazy. A man like Matthew was dangerous.

He'd broken his girlfriend's heart and was most likely biding his time before breaking someone else's.

A woman would never be safe with someone like him.

But Andie's body wasn't interested in safe. It wanted this man, and to hell with the consequences.

She froze as something brushed her bare leg. Daisy, her father's aged Golden Retriever, stood beside her. Daisy saw the dogs in the next yard and barked, wanting to join them, even though her arthritic old bones made her a poor playmate. At the sound, Matthew turned, and Andie was caught like a deer in the headlights of an oncoming car, too stunned to move.

Frozen there, she was sure she looked like some perverted peeping Thomasina or worse—some desperate sex-deprived loser. Which wasn't far from the truth.

An instant later she regained use of her limbs and quickly stepped away, out of Matthew's sight. Her heart thumped as she shook her head in disbelief. God, what was she doing?

Andie dragged herself back to the safety of her bedroom—

with one stop at the bathroom sink to splash water on her flushed face. The water cooled her hot cheeks but did nothing for the heat between her thighs. Even being caught red-11

Andie slid into bed and kicked off the blankets and sheet.

Her skin felt hot and tender, the throbbing between her legs unbearable. Her thoughts were full of Matthew, and she easily slipped back into the fantasy she'd enjoyed in the kitchen.

She imagined sliding his T-shirt up his chest, bunching it under his arms. The cotton was soft from many washings and smelled of detergent as Andie nuzzled her nose to it. Her fingertips skimmed over the soft skin of his chest. His nipples were hard little points made harder by the swirling motion of her fingers around them. She lowered her head to taste them while her hands combed through the rough hair. He tasted clean and slightly salty from sweat.

In her fantasy, Matthew's hands were busy, too. They inched up under her short nightgown, performing a teasing dance on her hips and ass. They tickled and tormented, but as good as it felt, his hands were not where she wanted them.

He grasped her butt, a cheek in each hand, and Andie didn't mind. Usually she didn't like that particular part of her anatomy played with, it was where her excess weight settled.

He lifted her. She had to stop kissing his chest, but that was okay, because now his mouth was right there, and she didn't merely kiss it—she devoured it. It was the sweetest, most decadent mouth she'd ever tasted, and she wanted as 12

much as she could get before someone came along and said,

"You've had enough, Andie, no more for you." She sucked his lower lip into her mouth, nipped it, then laved the sting away with her tongue. Her tongue undulated against his, dueled with his, licked it again and again to savor every bit of his luscious flavor.

In her imagination, her breasts, so full and so tender, were crushed against his chest. She wanted him to use his lips on her, to be as attentive to her nipples as she had been to his.

But at the same time it was delicious torture to rub them against him. The silkiness of the nightgown and the rough hair on his chest created a delicious friction that shot sparks straight down her spine to the moist folds between her legs.

It didn't matter now if the man was a player. At this moment Andie didn't care. She wanted to be used. This wasn't about love. It was about getting off.