Read One Grave Too Many Online

One Grave Too Many 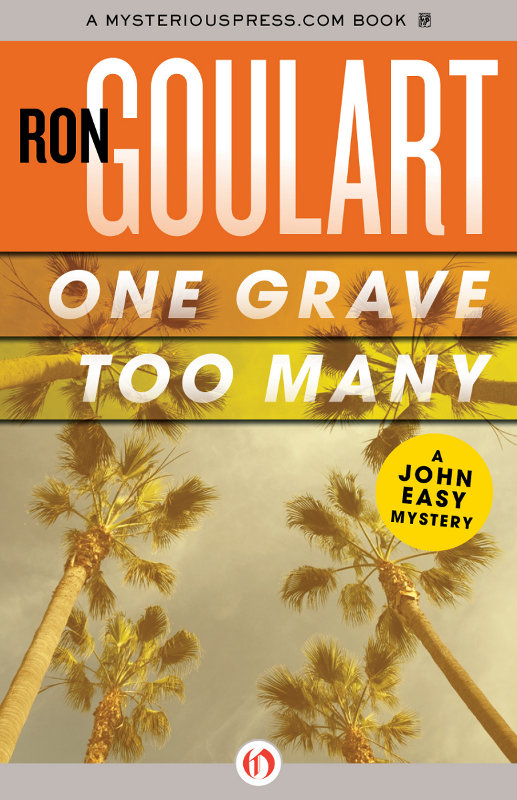 One Grave Too Many
Ron Goulart

A
T THE FIRST RUMBLE
of the earthquake the naked girl let go of him. She sat upright, crying out, “Oh, Jesus!”

A flat orange candle skittered and hopped off the low redwood bureau, cracking and smashing when it hit the floor.

Untangling himself from the pale blue sheets, John Easy scooped the slender blonde girl up off the bed. He carried her, trotting barefooted, toward the bedroom doorway, dodging the three matched suitcases open on the floor.

The full length windows which showed them the bright morning patio were rattling. The palm trees out there were flapping, water splashed up out of the big blue swimming pool. Angry jays clattered up into the air. The big house made a harsh groaning sound, the floor seeming to bounce.

“It’s not going to be a bad one,” Easy assured her, setting her down so she was under the arch of the open doorway.

“It’s bad already.” The lovely blonde had her eyes tightly closed as she reached out to hold onto him.

The patio was quiet. The windows rattled once again, almost gently. “That should be about it,” said Easy. He was a big wide-shouldered man. Thirty-two, with mahogany-colored hair and a dark knocked-about look.

Jill opened her eyes tentatively. She sighed. “Quakes don’t bother you the way they do me.”

“Native Californians,” Easy said, “are indifferent to them.”

“I’ve lived here since I was ten. I guess that’s not good enough, huh?”

“Nope, for fullblown indifference you have to be born in the state.”

“You weren’t too indifferent to go bounding out of bed with me. Why did we stop here?”

Easy pointed a thumb upward. “Doorways are supposed to protect you if the roof falls in.”

“Did you expect the roof to fall in on us?”

“Apparently my reflexes did.”

“Well, I’m glad your reflexes included me in their plans.” She stopped holding onto him, hugged herself. Her breasts tapped each other. “Where were you born anyway?”

The naked girl smiled. “You never struck me as a smalltown boy.” She wandered back into the bedroom, knelt beside one of her suitcases. Her dark nipples pointed at the neatly packed lingerie. “I don’t suppose the earth opened and swallowed the Burbank airport.”

“You have to get up to 6 or 7 on the Richter quake scale before airports get swallowed.”

Easy crossed, sat on the edge of her bed. “You already made the deal.”

“I’m not at all sure I want to go to Spain and be in
Six Bloody Cowboys.
”

“I thought it was
Seven Bloody Cowboys.
”

“Six now. When Eli Wallach backed out they decided not to replace him,” the girl said.

“Leaves them with one extra horse.”

Jill seated herself beside him, her warm bare buttocks touching his. “You could still talk me out of it. Tell me I don’t want to play the female lead in some spaghetti Western, or whatever the Spanish equivalent of spaghetti is.”

Shaking his head, Easy said, “You have to talk to yourself when it comes to your career.”

“Well, I guess I do want to keep having a career,” the girl admitted. “As my agent says, this is a step up from doing commercials and an occasional TV bit, isn’t it? So I guess I’ll go.”

“Six weeks isn’t really such a great long time. You’ll miss me, though?”

She rested a hand on his bare chest. “You’re getting gray here and no place else,” Jill said. “Well, okay. I’ll go ahead and embark for Spain this afternoon. Six weeks. I don’t suppose … I mean, six weeks isn’t a very long amount of time, but it’s a long stretch for you to … will you sleep with other people in my absence?”

Easy narrowed one eye. “Gee, I hadn’t given it much thought.”

After a few seconds Jill smiled. “All right, no more questions. I don’t want to spend our last day together arguing and hiding from earth tremors.” She turned toward him, her left breast brushing his arm.

They ignored it for the first ten rings. Then Jill moved away from him, saying, “I’m also one of those people who can’t let a phone go unanswered. Damn it!” She went across the rumpled bed on hands and knees, caught the white phone off the night table. “Hello? I thought so. Here, John.”

Easy didn’t take the phone she held toward him. “Who is it?”

“Tell her I’ll be in the office around noon.”

“He’ll be there at noon, Nan. I know, but you know how he is.” To Easy she said, “She’s got a very anxious lady sitting there.”

“Nan, he says he won’t be there until noon. His lawyer sent her over? He’d like John to get to work on the case right away as a special favor to him.”

Easy stretched out on his back on top of the pale blue sheets, locked his hands behind his moderately shaggy head.

“I’m afraid it’s going to be no earlier than noon,” Jill told Easy’s secretary. “Okay. Oh, I’m fine. Yes, I think I’ll miss LA, strange as that sounds. The quake? Yes, it really scared me. I just can’t get …”

Easy reached around her to break the connection. His arm rubbed against her smooth flat stomach as he hung up the phone, then took it off the hook again.

“That poor woman’s going to be awfully anxious by noon.”

Easy pulled her down beside him.

“You still have an erection,” Jill noticed. “Even the quake didn’t effect it. I bet I know why. It’s because you’re …”

“A native Californian, yes.” Easy took hold of her and kissed her.

Easy strode across his chill private office to look out into the reception room. “Where’s the eager client?” he asked.

His broad-shouldered thirty-six year old secretary was at her desk reading a two-dollar paperback on transcendental meditation. She steepled it next to her coffee cup. “The quake must have jiggled your body clock, John. It’s one-thirty.”

Flat-footing across the gold rug, Easy stuck his finger into a new lightning-shaped crack in the wall. “Earthquake damage?”

“Yes. Our insurance company doesn’t cover it; I checked,” replied Nan Alonzo. “Have you had lunch?”

“You shouldn’t skip meals. It plays hell with your blood sugar.”

“I’m thinking of fasting till Jill gets back from Spain.”

“You’re going to miss her. She’s the only girl who’s gotten behind that flippant persona you use to guard yourself against the world.”

“My persona’s got more cracks in it than these walls.”

“Jill took off, did she? She’s really bound for Spain.”

“She’s on her way to the airport now.” He sat on the stark sofa. Through the slice of space between drapes he could see highly-polished sports cars racing by on the Strip. “Who was the lady who was so anxious to hire me?”

Nan swept a memo pad over in front of her. “Her name is Gay Holland. She went back to Beverly Hills about a half hour ago in case her brother calls.”

“Her brother is fond of calling her when she’s up there?”

“She doesn’t know what he’s likely to do,” said Nan. “She’s a very attractive girl, about twenty-six or twenty-seven. Dark, probably a little too healthy-looking for you. You seem to go …”

“Does her problem have something to do with her brother?”

“Yes.” Nan turned to the second page of her memo pad. “He’s missing.”

“Since the day before yesterday.”

“Guys that age wander around a lot. Why’s she worried so soon?”

Nan touched a sentence she’d underlined. “The girl and her brother don’t live together,” she explained. “She stopped by his place in Westwood this morning to see why she hadn’t been able to get hold of him since Tuesday. The place had been torn apart.”

“She says she thinks somebody was looking for something, that kind of mess.”

“Yeah, I’ve heard of them. What does Feller say about his missing partner?”

“He doesn’t have any idea where he is, but he told Miss Holland not to worry.”

The cars flashing by outside in the hot afternoon made Easy frown. “She hasn’t tried the cops?”

“No, she doesn’t want to,” Nan said. “See, the girl has an idea where he might have been before he disappeared. Which is another thing that worries her.”

“With somebody else’s wife,” Nan told him.

T
HERE WERE THREE MARBLE
statues and a girl in the vast sloping garden. The girl touched at the frames of her dark glasses, smiled cautiously at Easy and came walking along a yellow gravel path to him.

“Yes, thank you for coming up to the house. I waited in your office but then I thought … sit down, won’t you.” She was tall, very tan, with long black hair.

Easy lowered himself into the wide wrought-iron bench she’d indicated. “Heard from him yet?”

“No, no. Still nothing.” She sat beside him, smoothing down her short pale yellow skirt.

From here you could see the enormous mansion Gay Holland lived in. It reminded Easy of movies he was too young to have seen. An angling sprawling house, with many arches, red tile roofs, much twisted wrought-iron. “When did you see your brother last?”

“Two days ago,” she answered, smoothing at her skirt again. “We were supposed to meet for lunch yesterday at a little place near the ocean in Malibu. He didn’t show up or send word, which isn’t at all like him. Gary and I have always been very close, stuck together through everything.”

“What does everything consist of?”

The girl stood, began walking away from him. “Oh … I went through a fairly rough divorce two years ago,” she said. “And then Gary’s marriage went down the drain last year.”

Easy caught up with her, walked beside her. “You told my secretary you’d gone to his house looking for him.”

“That was this morning, fairly early. Gary has a cottage sort of place down in Westwood, just up from UCLA,” said Gay. “It was … all turned upside down.”

“This was before the quake?”

The Third Antichrist by Reading, Mario
Separate from the World by P. L. Gaus
The Drop by Howard Linskey
The Wells Brothers: Luke by Angela Verdenius
A Florentine Death by Michele Giuttari
Debatable Land by Candia McWilliam
Wizards at War, New Millennium Edition by Diane Duane
Merv by Merv Griffin
Stranger in the Night by Catherine Palmer
Shutter by Rhonda Laurel