Read One to Love (One to Hold #4) Online 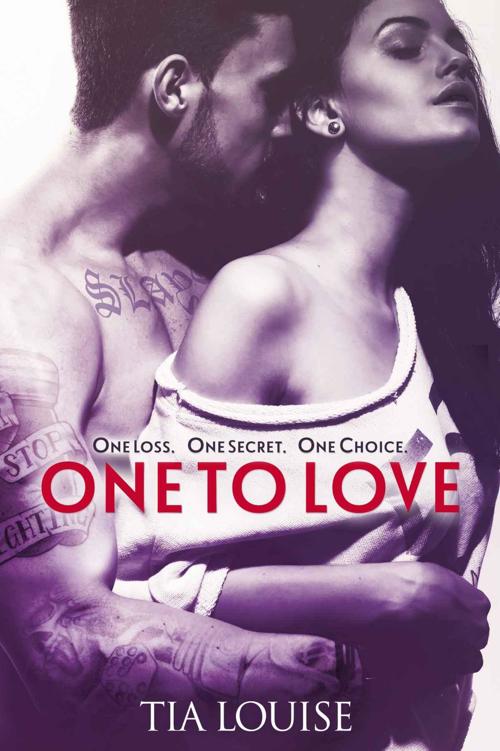 One to Love (One to Hold)

Chapter 1: “The pain you feel today is the strength you feel tomorrow.” | Kenny

Chapter 2: “Inhale the future; exhale the past.” | Slayde

Chapter 5: “Change is the only constant.” | Slayde

Chapter 6: “What doesn’t kill us makes us stronger.” | Kenny

Chapter 7: “Every breath is a second chance.” | Slayde

Chapter 16: “Every journey begins with the first step.” | Kenny

Chapter 21: “I am fearless because I’ve been afraid.” | Slayde

Chapter 22: “Live in the sunshine, swim in the sea, drink the wild air.” | Kenny

Chapter 27: “I am the architect of my own destruction.” | Slayde

Chapter 33: “A pair of ragged claws, scuttling across the floors of silent seas.” | Slayde

Further Reading: One to Keep

It’s the one thing Kenny and Slayde have in common. Until the night Fate throws them together and everything changes.

It’s a story about fighting. It’s about falling in love. And it’s about losing everything only to find it again in the least likely place.

A
stand-alone, ONE TO HOLD novel. New Adult Contemporary Romance: Due to strong language and sexual content, this book is not intended for readers under the age of 18.

If you are reading this book and did not purchase it or win it from an author-sponsored giveaway, this book has been pirated. Please delete it from your device, and support the author(s) by purchasing a legal copy from one of its many distributors.

T
his book is a work of fiction. Names, characters, places, and incidents are products of the author’s imagination or are used fictitiously. Any resemblance to actual events or locales or persons, living or dead, is entirely coincidental.

C
over design by Steven Novak

All rights reserved. No part of this publication can be reproduced, stored in a retrieval system, or transmitted in any form or by any means—electronic, photocopying, mechanical, or otherwise—without prior permission of the publisher and author.

For Mr. TL, who helped me find Kenny and then approved of Slayde.

Yes, this one is for us.

Chapter 1: “The pain you feel today is the strength you feel tomorrow.”
Kenny

My fists slammed into the canvass bag, hitting it over and over with a satisfying
THUNK!
I was a rockstar, a badass. Rocky. No—I was Wonder Woman, blocking bullets with my wrists.
Ten more seconds...

“Woo!” I yelled as I jumped up and down, clapping my gloved hands together before raising them over my head.

My muscles were burning and spent, but I felt amazing. I glanced at the motivational poster on the wall—a superhot, ripped woman in a black bikini running over the caption:
She’s the gazelle. Be the tiger.

I pointed at it. “Fuck that!
I’m
the tiger.”
Boom!
I gave the bag another roundhouse kick. “Take
that
, gazelle!”

Then I exhaled a laugh and stepped back. Post-workout adrenaline was crazy. I grabbed the white towel off the bench along with my water bottle and took a long drink. I wasn’t very good at kickboxing, but it was so much fun. The idea hit me (ha ha) cleaning out my boss Rook’s old VHS tapes of celebrity workouts. I popped in Tae Bo, and immediately I wanted to do it.

Being self-taught, I’d have to do a certification class if I wanted to train or teach a class of it here at the gym, but I didn’t care. Right now I was simply getting stronger, punching out the stress. A brief glance at the speed bag, and my lips twisted into a frown.

That little fucker was a whole other matter. I’d looked like an idiot trying to keep time with it my first try. It ended up bouncing back and hitting me in the head, which made Rook howl with laughter. Embarrassment burned my cheeks, but I swore I’d master that guy.

I just wasn’t doing it this morning. In thirty minutes my first and only client of the day would arrive, leaving me enough time to shower, put on fresh yoga pants, a sports bra and tank, and have my morning power smoothie.

Fridays were light days, but I had to help run the juice bar for Mariska and hang around in case any new clients walked in or existing ones decided to rearrange their schedules. Mariska was my best friend and self-appointed Mistress of Smoothies. We’d met in art class at Ocean County College. I had taken fall semester off this year, but she arranged her schedule so all her day classes were on Fridays. Pete, the other trainer, wouldn’t be in until lunch. Rook, and his wife Tammy would arrive in the next hour.

Rook was an ex-NFL player, forced to retire after blowing out his knee. It was pretty life shattering from what I’d pieced together. He’d almost fallen apart, and ended up working as a bouncer, a bodyguard, a mover, pretty much anything requiring muscle, until he met Tammy.

She was a bombshell of a former pageant girl and got him into professional fitness. She taught most of the group classes here, from Pilates to Zumba, but they started out doing bodybuilding, nutrition, and videos before opening The Jungle Gym in Toms River, right next to Bayville, where I lived, and close to where all the MTV reality-TV kids liked to misbehave.

They kept it flush with product endorsements and reviews, and the vibe was very sexy, “Where the wild things are.” We never got any celebrities in the gym, but we got a lot of suburban wannabes, which was just as good if not better.

Rook made all the hiring decisions, and he paid his trainers a decent wage. I was lucky I’d moved back to Bayville right when he’d needed a new juice bar attendant. I’d quickly moved up to personal trainer. Now I was toying with adding kickboxing to my resume. He wanted all of us on the cutting edge of new class offerings. Currently, I was planning out a regimen that combined BodyCombat, Animal Moves, and Rhythm Hit.

Making my way through the large exercise room, everything smelled like Windex and new carpet. It was actually a nice space for a small, unincorporated gym. I grabbed my key out of my cubby and heading to the female locker area in the back of the building.

Cool metal met my hand as I pushed through the door and rounded the painted cinder-block wall. The floor was concrete, but it was scored with a diamond pattern and stained aqua blue. Stopping at a locker, I slipped in a small key and opened it. My black tank was soaked as I pulled it over my head, but it was good sweat, not perspiration. I’d worked hard this morning, and a hot shower was calling my name.

Pushing off my capri-length black workout pants, I stuffed everything into the plastic bag I kept for sweaty clothes and slammed the door. A few steps and I’d be relaxing under the spray. Towels were stacked in neat rolls at the entrance to the long row of showers, and I grabbed one just as I heard the sound of water going.

Tammy must’ve decided to shower at the club this morning. It was unexpected, but I wrapped the towel quickly around my body in case she stepped out as I passed. Not that I was so modest, but who really walked around a locker room totally naked? Plus, I didn’t want to hear her exclaiming about the lines on my torso or how nicely I was “filling out” since I’d started doing CrossFit.

Tammy was in amazing shape, and a full-figured hourglass. As such, she made it her mission to fight “negative body image,” and she was always encouraging me to eat more. It would’ve gotten on my nerves if she weren’t so nice.

Shaking my head with a smile, I rounded the corner and almost screamed. The curtain was open, and Tammy was on full display under the steady stream. Her eyes were closed and her back arched against her husband’s dark chest. He held one of her legs up as he pounded her from behind, and with every slam, her moans grew louder.

Rook gripped one of her breasts in an enormous hand before reaching down and throwing her other leg over his arm. He was actually strong enough to lift her that way, slamming her up and down against his pelvis as the muscles in his dark legs flexed.

Shock and awe had me glued to the spot with my mouth open. Heat flared between my thighs at the live show.

“So... fucking... good,” he groaned, gripping her thighs and bouncing her up and down his long shaft.

“Right there! Right there! Oh YES!” Tammy cried, holding his neck and frantically pumping her legs to help him. She yelped like a puppy, over and over as her entire body began to shake.

Glazed eyes slit open, meeting mine, and I snapped out of it. I spun on my heel and ran all the way back to the lockers, clutching the towel against my chest. I was panting, my heart was flying, and my whole body trembled. Moisture was slick between my thighs, and Tammy’s orgasmic yelps still echoed in my ears.
Shit!

It was the second time I’d caught them going at it in the gym. The first time was six months ago when I’d been doing my final, nightly sweep before locking up. I’d busted them all the way in the back in the men’s weight room. That time, Rook was straddling the weight bench and Tammy was straddling him.

Her white-blonde head flew and her back arched as she held on behind her. Every time he pounded her, her large breasts circled with his mouth chasing them. I’d never get that image out of my brain.

That time I’d run all the way to the juice bar snorting. This time I was pissed.
Dammit
. They knew I was here, and worse—they knew I’d been alone a long time. It was completely inappropriate and insensitive to parade their insatiable sex life in front of me. Before long, I’d be afraid to round any corners after hours.

Sitting on the bench, I waited until my breathing calmed, and after what felt like forever, I cautiously stood and crept back toward the showers. My client would be here in just a few minutes, and I had to get ready.

My long, dark hair was still piled on top of my head, and the towel was secured around my body. The stalls were all empty and quiet. The only signs anyone had been here were the water droplets on the curtains and the wet floor. I figured Tammy had hustled them out after seeing me.

With a deep breath, I reached for the handle to turn on the hot water.

T
ammy was alone, flipping through a fitness magazine behind the juice bar when I went out front. She had a Zumba step class at nine-thirty, and she was dressed in black booty shorts and a loose, hot-pink tank over a camo sports bra. Her hair was now up in a ponytail, and she was a festive contrast to my all-black trainer gear and low-ponytail.