Read One Way Out: The Inside History of the Allman Brothers Band Online

One Way Out: The Inside History of the Allman Brothers Band 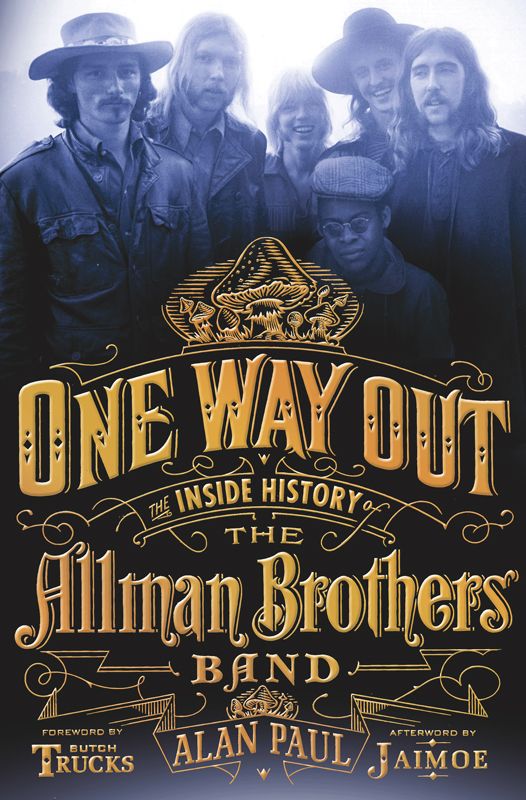 To my brother David, who handed me
Eat a Peach,
then let me sit on that yellow shag carpet listening
to his stereo for hours on end.

And to Jacob, Eli, Anna, and Rebecca, of course.

2. PLAYING IN THE BAND

Photo of the ABB on stage, with Dickey and Duane on guitar

3. GEORGIA ON A FAST TRAIN

Photo of the band at Macon, Georgia, spring 1969

Photo of Duane Allman and Dickey Betts, on guitar

Photo of Gregg Allman with his guitar

7. LIVING ON THE OPEN ROAD

Photo of Dickey Betts behind the lines, at Tulane University, 1970

Photo of Jaimoe and Duane Allman at the Thunderbird Bird Motel, Miami, 1970

Photo of Berry Oakley after the Alabama bust

Photo of (top) Butch Trucks after the Alabama bust

Photo of Duane Allman after the Alabama bust

Photo of Gregg Allman after the Alabama bust

Photo of Dickey Betts at his wedding

12. WILL THE CIRCLE BE UNBROKEN?

Photo of “The Farm” (from left) Kim Payne, Dickey Betts, Buffalo Evans, Tuffy Phillips. Betts’ father is standing behind him

Photo of Dickey Betts and Berry Oakely at The Warehouse, New Orleans, 1971

Photo of Dickey Betts, driving near the Juliette farm

15. GOIN’ DOWN THE ROAD FEELING BAD

Photo of Lamar Williams (left) and Chuck Leavell at the Farm

Photo of Dickey Betts and his daughter, Jessica

21. IT WAS TWENTY YEARS AGO TODAY

Photo of the ABB, Memphis, 1991, during the
Shades of Two Worlds
sessions

Photo of the marquee outside the Beacon Theater, New York City

Photo of the
Shades of Two Worlds
sessions, Ardent Studio, Memphis. Tom Dowd is on the right

Photo of the ABB, 1997–99, with Jack Pearson and Oteil Burbridge

25. LAY YOUR BURDEN DOWN

Photo of Jaimoe playing the drums

Photo of Gregg Allman and his keyboard

Photo of the ABB in Gregg Allman’s Georgia backyard, 2003

Photo of Derek and Butch Trucks

29. THE ROAD GOES ON FOREVER

Photo of Gregg Allman and B. B. King, Apollo Theater, Harlem

One Way Out
is the culmination of thirty years trying to untangle the myths and legends surrounding the Allman Brothers Band. I have interviewed the members hundreds of times, shared meals, ridden buses, quietly watched rehearsals, and attended countless shows. Through it all, I have never lost sight of why this story matters: the music.

Any access I have gained has been in the service of trying to understand how this exotic brew came to be. I have viewed everything with the eyes and ears of a journalist but the heart and soul of a fan. The Allman Brothers Band, I believe, has no equal.

The original six-piece band, with Duane and Gregg Allman, Dickey Betts, Berry Oakley, Butch Trucks, and Jaimoe created inspired, utterly unique magic. From their remarkable self-titled debut album in 1969, the band succeeded in reinventing blues-based music in a way that was both visionary and true to the original material.

Their music was the result of true group collaboration. Butch Trucks and Jaimoe’s pulsating drive provided unique depth and jazz swing. Dickey Betts and Duane Allman’s guitar work expanded the blues melodically and harmonically, setting a new standard for touch and tone without ever lapsing into overplaying. Berry Oakley’s bass wove between the other instruments, playing melodic lines that tied the music together into one cohesive package. Gregg’s funky organ seasoned the mix, while his vocals sounded both ancient and modern, singing the blues in a legit fashion his peers could only fantasize about.

The instrumental majesty would not have meant much without a magnificent set of songs, written by Gregg Allman and Betts: “Whipping Post,” “Dreams,” “Midnight Rider,” “Blue Sky,” “Melissa,” “In Memory of Elizabeth Reed,” and “Jessica” are both timeless and wildly diverse with clear echoes of country, jazz, blues, and rock.