Read Only For A Knight Online

Only For A Knight 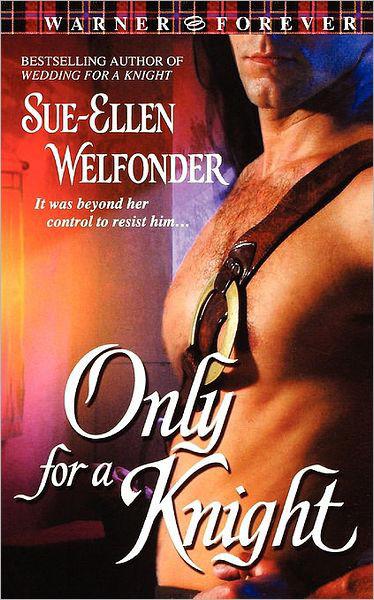 Excerpt from
Until the Knight Comes
copyright Š 2005 by Sue-Ellen Welfonder.

The Legacy of the Black Stag

WEDDING FOR A KNIGHT

With history and beautiful details of Scotland, this book provides romance, spunk, mystery, and courtship . . . A must-read!

A very romantic story . . . extremely sexy. I recommend this book to anyone who loves the era and Scotland.

MASTER OF THE HIGHLANDS

Welfonder does it again, bringing readers another powerful, emotional, highly romantic medieval that steals your heart and keeps you turning the pages.

A vastly entertaining and deeply sensual medieval romance . . . For those of us who like our heroes moody, ultra HOT, and SEXY . . . this is the one for you!

Yet another bonny Scottish romance to snuggle up with and inspire pleasantly sinful dreams . . . A sweetly compelling love story . . . [with a] super abundance of sexual tension.

Welfonder brings the Highlands to life . . . Romance, mystery, action, and passion, combined with historical details, make
Master of the Highlands
a joy to read.

Another masterpiece . . . I can hardly wait to read Ms. Welfonders next book . . . She never lets her readers down.

BRIDE OF THE BEAST


Bride of the Beast
is a thrilling story . . . It is so sensual at times, it gives you goose bumps . . . Ms. Welfonder spins pure magic with her vibrant characters.

Four and a half stars! . . . A top pick . . . Powerful emotions, strong and believable characters, snappy dialogue, and some humorous moments add depth to the plotline and make this a nonstop read. Ms. Welfonder is on her way to stardom.

KNIGHT IN MY BED

The perfect blend of intrigue, forbidden love, and danger.

DEVIL IN A KILT

A lovely gem of a book. Wonderful characters and a true sense of place make this a keeper. If you love Scottish tales, youll treasure this one.

As captivating as a spiders web, and the reader cant get free until the last word. It is easy to get involved in this tense, fast-moving adventure.

Four and a half stars! This dynamic debut has plenty of steaming sensuality . . . [and] a dusting of mystery. Youll be glued to the pages by the fresh, vibrant voice, and strong emotional intensity . . . Will catapult Welfonder onto must-read lists.

An engaging mystery . . . very fast paced with fascinating characters and several interesting plot twists . . .
Devil in a Kilt
is a keeper.

Devil in a Kilt

Knight in My Bed

Bride of the Beast

Master of the Highlands

Wedding for a Knight

For the Legends of Lochindorb.

May they always walk in the joy of bright blue days and, of a night, gaze only on the brightest shining stars. May they ever be wrapped in sweet golden warmth and contentment. And as it has thrived undiminished all down the centuries, may their incomparable love bloom through all their tomorrows and beyond, unending. These blessings I wish themwith the whole of my heart and soul.

Scotland ever holds my heart and is the wellspring of my inspiration, the passion behind every word I write. To walk there can feel like moving in a magical land where time stands still and centuries-old traditions of Gaelic heroic myth and legend still throb with life.

Even the most remote corners of Scotland are steeped with tales of larger-than-life men and women, true heroes and heroines so great of heart and spirit they could easily stride across the pages of any romance novel.

The opening scene for this book was inspired by one such heroic soul, Lieutenant Colonel T. W. Cuthbert of the Seaforth Highlanders. A well-respected man and devoted animal lover, he died while trying to rescue a drowning ewe in a lochan. I learned of him while staying at the Eddrachilles Hotel on Scotlands wild northwest coast. Colonel Cuthbert rests in the hotels lovely rhododendron-filled garden, and it was there, as I paid my respects to him, that I decided how Robbie and Juliana should meet.

Special thanks as always to my editor, Karen Kosztolnyik, whose glowing warmth, expertise, and intuitive wisdom shine ever so brightly. Deepest gratitude, too, to my true-hearted friend, Roberta Brown, for being such a brilliant light in the dark.

And as ever, all my appreciation to my handsome husband, Manfred, my real-life knight, for his understanding, patience, and strength. And, of course, for wee Em, my own four-legged champion, who knows very well that I would not trade him for all the worlds romance novel heroes combined.

The Legacy of the Black Stag

I
N THE MIST-SHROUDED FASTNESSES
of Kintail, a rugged country of sea lochs, wild heather hills, and moorlands on the western coast of Scotland, one man has eer held sway. Since time beyond mind some might say, Duncan MacKenzie, the famed Black Stag of Kintail, has called this hauntingly beautiful place his own.

His, and the great house of MacKenzie, the most powerful clan in the region.

Truth be told, those who visit Kintail cannot help but be awed by the grandeur and magic of the land, or the tall tales circulated about its legendary chieftain. A deceptive air of tranquility and timelessness clings to the dark peaks and shadowed glens, a peace made possible only by the puissant Black Stags competent ruleand his formidable reputation.

Few are those who would cross him.

And most who have tried are no more.

Yet, of late, during long Highland nights beside the fire, the more bold amongst the tongue-waggers declare that the Black Stag has grown complacent and would surrender his lairdship to his only son and heir, Robbie MacKenzie. A braw young man whose task would seem tame, inheriting a land so favored, its people already loyal and true.

But all is not as it seems in the soft Highland air and broad, cloud-hung hills of Kintail, its purple moors and empty glens.

For deep within the most remote corner of this expanse of hill and sea, change and disruption stir like an ancient benediction chanted just beneath the surface to echo across the heather until even one so mighty as the Black Stag cannot deny its truth.

Or run from the burdens and memories of the past.

Robbie, too, must trod the path of fate.

A path indelibly inscribed on his destiny and unleashed by the whispered last wishes of a frail and dying woman.

Juliana Mackay stared down at her mother and reached to smooth the threadbare plaid tucked so lovingly about the older womans thin body. She hoped shed misheard the ill womans unthinkable request.

After all, her mother had lost much strength in recent days. The words had been rasped in little more than a dry whisper.

Straightening, Juliana wiped her palms on the many-times-patched skirts of her kirtle and struggled against the urge to flee from the pathetic sight before her. She wanted to wrest open the rough-planked door and run from the mean little cot-house of sod, heather-thatch, and stone, until shed put all her cares and woes behind her.

Instead, she drew a deep breath and fixed her gaze on the peat fire smoking beneath a heavy iron cooking pot.
Repay Duncan MacKenzie.
The very notion ignited her spleen and twisted her innards.

But in case she hadnt, she squared her shoulders and folded her arms. A stance meant as much to stave off any further appeal as to keep herself from yielding to her own panic and fears and raining a thousand well-peppered curses on the man whose family had brought such grief to bear upon her own.

But she knew without asking that any such outburst would only plunge her mother into another coughing fit.

The Black Stag is one of the most heavily-pursed lairds in all the land, she said at last, trying not to see the feverish glint in her mothers eyesthe desperate plea hovering there.

Ben Hope 05 - The Shadow Project by Scott Mariani
Magdalen Rising by Elizabeth Cunningham
Morning After (A Reynolds Security Novel) by Hale, Melissa
Microsoft Word - RecklessBounty by test
Ink and Steel by Elizabeth Bear
Firefly Summer by Maeve Binchy
Jeanne Glidewell - Lexie Starr 04 - With This Ring by Jeanne Glidewell
In the Valley of the Kings by Daniel Meyerson
Lost In Lies by Xavier Neal
Soul Mate (The Mating Series) by Swan, S.