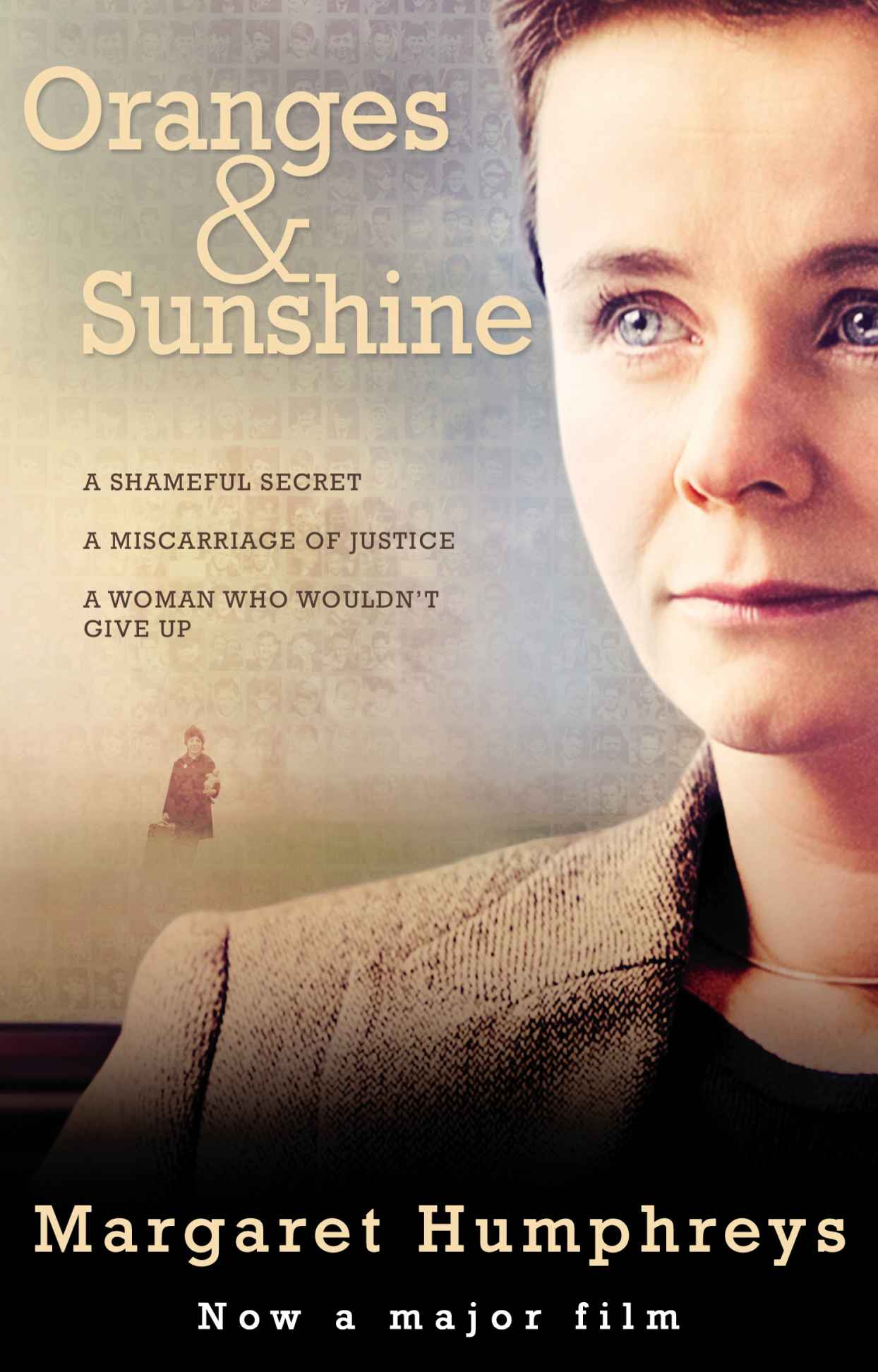 In 1986 Margaret Humphreys, a social worker from Nottingham, investigated a woman’s claim that, aged four, she had been put on a boat to Australia by the British government. At first incredulous, Margaret discovered that this was just the tip of an enormous iceberg. Up to 150,000 children had been deported from Britain and shipped off to a ‘new life’ in distant parts of the Empire, right up until 1970.

Margaret and her team reunited thousands of families before it was too late, brought authorities to account, and brought worldwide attention to an outrageous miscarriage of justice.

To all the child migrants and their families,
particularly those who have suffered in
silence for so long,
with respect and admiration
.
Foreword to the new edition

When Jim Loach first asked to make a film based on
Empty Cradles
, I was concerned that the lives of former child migrants should be captured on the big screen in all their complex humanity. I must confess that I dreaded seeing myself, my family and my colleagues twisted out of shape to suit the drama. My fears were unfounded. I would have been its fiercest critic if it had fallen short, but Jim’s film,
Oranges and Sunshine
, is sensitive, compelling, finely crafted and absolutely true to the spirit of this book.

Inevitably, revisiting that time has been a bittersweet experience.

We were so very hopeful then.

The Child Migrants Trust survived on a shoestring, sometimes on less, and we knew that we were engaged in a race against time – to reunite child migrants with their elderly parents before it was too late.

I believed the publication of
Empty Cradles
in 1994 would be a major step forward in our campaign. I thought the scandal of what one British MP described as ‘war crimes without the war’ could no longer be swept under the carpet. There would be sufficient funds to achieve our objectives. The churches and charitable agencies involved would admit the devastating consequences of their past policies and, as far as possible, set out to make amends. There would be public recognition of the wrongs these remarkable people had suffered – first as children then as adults – at the hands of a succession of governments which seemed to have forgotten them. That recognition was hugely important both to them and to their families.

We really hoped that our struggle had passed the tipping point. I vividly remember sitting in the waiting area at Edinburgh airport in May 1997, having shared another remarkable and emotional reunion. After a telephone call promising a Westminster Health Select Committee inquiry, tears of relief rolled down my face – surely, now, they would be believed; surely now they’d be granted their birthright.

Sadly, my optimism was short-lived.

Twelve long years were to pass before the Australian Prime Minister, Kevin Rudd, made a public apology. Early in 2010, Britain’s Prime Minister Gordon Brown followed suit in the House of Commons, for ‘this shameful episode … this failure in the first duty of a nation: to protect its children.’

These were milestones indeed, and I salute the courage and stamina of those who remained true to the cause. Sadly, for many, it was already too late. And for scores of others, the dark shadow of what happend to them in those terrible so-called Children’s Homes still weighs heavily upon them and their loved ones.

Our work has taken us on a long, hard, bumpy road. And as I write, the journey is far from over.

Empty Cradles
tells the story of seven of the most difficult, demanding and rewarding years of my life. I have witnessed so many tears of joy and sadness, so much laughter and sorrow in my work that doing justice to the range and intensity of these emotions remains a daunting challenge. For legal and ethical reasons, some of the accounts of the children’s experiences of abuse have not been described in fine detail. Similarly, I have respected the wishes of those who have asked to remain anonymous and changed certain names and details to preserve confidentiality. Sadly, this means that those concerned cannot be acknowledged publicly, but have been thanked by me in private.

Many individuals and organizations have helped me directly or indirectly through their support for the Child Migrants Trust.

In Britain, I am especially grateful to all the Trust’s staff, especially Sue Bush, Pauline Mace and Ian Thwaites, for their long, dedicated record of service, and to past and present Trustees, including Manfred Dessau, Profesor Pat Higham, Mike Hoare and the Hon Joan Taylor, for their long term commitment.

Nottinghamshire County Council gave outstanding and consistent support to the Trust’s humanitarian work over many years and deserves full recognition for its visionary initiative.

The Department of Health has funded the Trust over many years and has developed an increasingly productive and professional partnership.

I am also indebted to an increasing number of Members of Parliament who have brought the needs of former child migrants and their families before influential and wider audiences. Vernon Coaker, a local MP, and other members of the All Party Group on Child Migration, as well as the Health Select Committee, particularly former chairmen David Hinchliffe and Kevin Barron, deserve special mention for their interest, involvement and advocacy.

The International Association of Former Child Migrants and their Families, especially its President, Norman Johnson, has played a significant role in promoting social justice for the international child migrant community.

I am particularly grateful to all whose experiences as child migrants are described in the following pages, and their families.

Mark Lucas, my agent at LAW, and Michael Robotham, who assisted with the writing, both shared the growing pains and teething troubles of this book for longer than they care to remember. My thanks to them both for their inspiration, guidence and patience. At Transworld, my appreciation to Patrick Janson-Smith, Marianne Velmans and their colleagues for all their commitment.

Finally, I must thank my family in Nottingham, London and across the world, who made it all possible – especially Mervyn, Rachel and Benjamin, whose love and understanding have sustained me throughout.

At a time when empty cradles are contributing woefully to empty spaces, it is necessary to look for external sources of supply. And if we do not supply from our own stock we are leaving ourselves all the more exposed to the menace of the teeming millions of our neighbouring Asiatic races
.

In no part of Australia is settlement more vital than for Western Australia, which, while it contributes only one-twelfth of the total population, occupies one-third of the whole commonwealth …

His Grace the Archbishop of Perth, welcoming British
boys arriving in Australia on the
SS Strathaird
,
August 1938
Prologue
Perth, 1988

Opening the door, a woman asked me: ‘Are you the lady from England?’

‘You must be with that pale complexion. So what’s the weather like in the old country.’

‘The old country?’ I asked.

‘Oh, there were about sixty of us on the boat. We were collected from all over England. There were kids from Scotland and Ireland too. It was very hot when we arrived here. A bit like today.’

Outside it was already forty plus.

‘You’d better keep out of the sun,’ she said. ‘My God, we burnt. Our arms were burnt raw within days.’

I arranged a settee and two armchairs in the sitting-room and began explaining why I was in Perth.

‘I’ve come to talk with people who were child migrants; people who arrived in Australia without their parents.’

‘You mean you’ve come all this way to see us?’ the woman asked.

I could see the physical relief on her face.

She asked, ‘Can I hold your hand?’

I was taken aback but sat down beside her on the settee. She took my hand.

‘Where do you want to start?’ I asked.

‘Do you think I’ve got any family? Cousins, anybody. I’m not fussy. Anybody. They told me that my parents were dead. Do you think that’s true?’

‘How can I possibly help you? I don’t know anything about myself. Until I married, I didn’t even have a birth certificate. I felt ashamed.’

The tears began flowing down her face. We sat there for a long time until I had to go out and get tissues because her skirt was becoming soaked with the tears. She kept saying to me, ‘I’m sorry, I can’t stop. I’m sorry. I’m sorry.’

The flood of tears washed away any thoughts that the interviews could be given a specific time limit. Even the most basic questions were charged with such emotion.

‘What did we do wrong?’ she asked. ‘Can you find out why they sent me? What did I do wrong?’

‘You did nothing wrong.’

She looked at me as if I was being kind to her.

‘Do you know how old you were when you came to Australia?’

Malice at the Palace by Rhys Bowen
Conjugal Love by Alberto Moravia
All In by Kate Willoughby
Wild Renegade by Andria Large
Fancy White Trash by Marjetta Geerling
Trail to Shasta (9781101622049) by Roberts, J. R.
The Assassins of Tamurin by S. D. Tower
The Raging Hearts: The Coltrane Saga, Book 2 by Patricia Hagan
Legio XVII: Roman Legion at War by Thomas A. Timmes
A Dual Inheritance by Joanna Hershon