The names alone are enough to quicken the pulse of any science fiction aficionado,
including LRH friend and protégé, Robert Heinlein, Isaac Asimov, A. E. van Vogt and
Ray Bradbury. Moreover, when coupled with LRH stories of fantasy, we further come
to what’s rightly been described as the foundation of every modern tale of horror:
L. Ron Hubbard’s immortal
Fear.
It was rightly proclaimed by Stephen King as one of the very few works to genuinely
warrant that overworked term “classic”—as in:
“This is a classic tale of creeping, surreal menace and horror. . . . This is one
of the really, really good ones.” 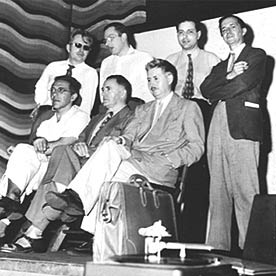 To accommodate the greater body of L. Ron Hubbard fantasies, Street & Smith inaugurated
Unknown
—a classic pulp if there ever was one, and wherein readers were soon thrilling to
the likes of
Typewriter in the Sky
and
Slaves of Sleep
of which Frederik Pohl would declare:
“There are bits and pieces from Ron’s work that became part of the language in ways
that very few other writers managed.”

And, indeed, at J. W. Campbell Jr.’s insistence, Ron was regularly drawing on themes
from the Arabian Nights and so introducing readers to a world of genies, jinn, Aladdin
and Sinbad—all of which, of course, continue to float through cultural mythology to
this day.

At least as influential in terms of post-apocalypse stories was L. Ron Hubbard’s 1940
Final Blackout.
Generally acclaimed as the finest anti-war novel of the decade and among the ten best
works of the genre ever authored—here, too, was a tale that would live on in ways
few other writers imagined. Hence, the later Robert Heinlein verdict: “Final Blackout
is as perfect a piece of science fiction as has ever been written.”

Like many another who both lived and wrote American pulp adventure, the war proved
a tragic end to Ron’s sojourn in the pulps. He served with distinction in four theaters
and was highly decorated for commanding corvettes in the North Pacific. He was also
grievously wounded in combat, lost many a close friend and colleague and thus resolved
to say farewell to pulp fiction and devote himself to what it had supported these
many years—namely, his serious research. 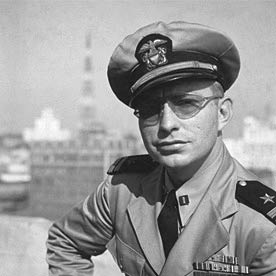 But in no way was the LRH literary saga at an end, for as he wrote some thirty years
later, in 1980:

“Recently there came a period when I had little to do. This was novel in a life so
crammed with busy years, and I decided to amuse myself by writing a novel that was
pure
science fiction.”

That work was
Battlefield Earth: A Saga of the Year 3000.
It was an immediate
New York Times
bestseller and, in fact, the first international science fiction blockbuster in decades.
It was not, however, L. Ron Hubbard’s magnum opus, as that distinction is generally
reserved for his next and final work: The 1.2 million word
Mission Earth.

How he managed those 1.2 million words in just over twelve months is yet another piece
of the L. Ron Hubbard legend. But the fact remains, he did indeed author a ten-volume
dekalogy
that lives in publishing history for the fact that each and every volume of the series
was also a
New York Times
bestseller.

Moreover, as subsequent generations discovered L. Ron Hubbard through republished
works and novelizations of his screenplays, the mere fact of his name on a cover signaled
an international bestseller. . . . Until, to date, sales of his works exceed hundreds
of millions, and he otherwise remains among the most enduring and widely read authors
in literary history. Although as a final word on the tales of L. Ron Hubbard, perhaps
it’s enough to simply reiterate what editors told readers in the glory days of American
Pulp Fiction:

He writes the way he does, brothers, because he’s been there, seen it and done it!

For more information about the life and works of L. Ron Hubbard,
go to
www.lronhubbard.org
.

The Stories from the
Golden Age

Your ticket to adventure starts here with the Stories from the Golden Age collection
by master storyteller L. Ron Hubbard. These gripping tales are set in a kaleidoscope
of exotic locales and brim with fascinating characters, including some of the most
vile villains, dangerous dames and brazen heroes you’ll ever get to meet.

The entire collection of over one hundred and fifty stories is being released in a
series of eighty books and audiobooks. For an up-to-date listing of available titles,
go to
www.goldenagestories.com
.

The Lieutenant Takes the Sky

Man-Killers of the Air

Sabotage in the Sky

Trouble on His Wings

The Adventure of “X”

All Frontiers Are Jealous

The Bold Dare All

He Walked to War

Price of a Hat

The Small Boss of Nunaloha

The Squad That Never Came Back

Tomb of the Ten Thousand Dead

Under the Black Ensign

TALES FROM THE ORIENT

The Devil
—
With Wings

Five Mex for a Million

The Trail of the Red Diamonds

The Carnival of Death

They Killed Him Dead

Danger in the Dark

If I Were You 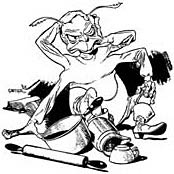 A Can of Vacuum

A Matter of Matter

The Professor Was a Thief 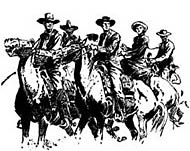 The Baron of Coyote River

Blood on His Spurs

Boss of the Lazy B

Cattle King for a Day

Come and Get It

The Gunner from Gehenna

King of the Gunmen

The Ranch That No One Would Buy

Reign of the Gila Monster

Under the Diehard Brand

When Gilhooly Was in Flower

Grid Seekers (Grid Seekers Book One) by Logan Byrne
Taken by the Beast by Natasha Knight
Sea Change by Diane Tullson
Requiem by Jamie McGuire
Losing Romeo by Cindi Madsen
In the Teeth of the Wind by Charlotte Boyett-Compo
Bridgeworlds: Rise of the Magi by Randy Blackwell
Veronica Ganz by Marilyn Sachs
The Martian War by Kevin J. Anderson
Daughter Of The Forest by Juliet Marillier