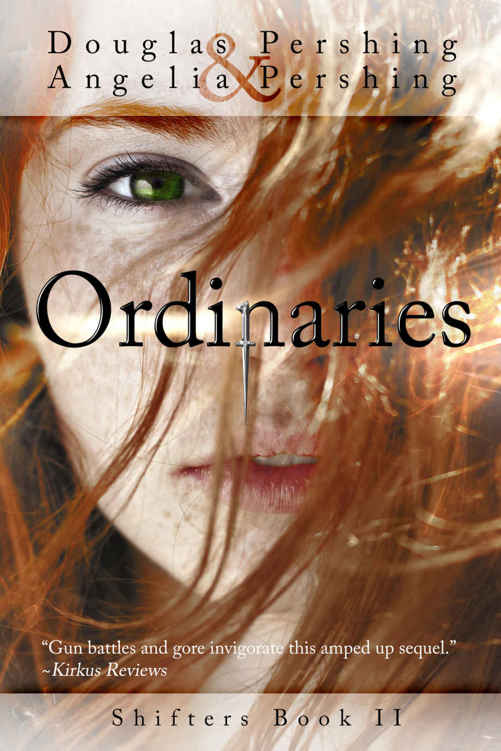 Edited by Heather A Morgan Damian and John Shaddox

All rights reserved. No portion of this book may be reproduced, stored in a retrieval system, or transmitted in any form or by any means—electronic, mechanical, photocopy, recording, or any other—except for brief quotations in printed reviews, without the prior written permission of the publisher.

Design and layout by Douglas Pershing

For more information go to:

To my biggest fan, Olive Pershing. Happy 97
th
birthday. I love you Grandma.

Thank you to my students whose incessant demands of “When will the next book be out?” forced me to write in a timely manner.

The Colonial War While I’m in the Bathroom

White Socks and a Secret Tunnel

We Find a Picturesque and Peaceful Garbage Dump

The Tomb Raider Jeep and a Fake ID

The Coop Train and an Armored Rat

She Totally Hits Like a Girl—Like a Russian Kickboxing Girl!

Ryland’s Angry: Why Am I Not Surprised?

Off to See The Wizard

Santa Claus, a Reindeer, and a Wolf

We Make a Deal with a Really Bad Guy

A Blow to the Head and a First-Class Ticket

We Break Out of a European Resort

Sirens, Buzzers, Alarms and All Kinds of Fun Sounds

We Are Overdressed and Way Too Colorful for This Party

So Let Me Get This Straight:
Our Coming to Help Is a Bad Thing?

I Have an Idea:
How About You Put a Sack on Your Head?

Why Does Everybody Treat Us Like Children?
Hello! We Did Just Travel through Space.

It Only Took Two Days to Change Six

Fifteen Minutes Ago Would Have Been Better

Guests Usually Don’t Knock on the Back Door

I Think I May Need a Medic

You Know That Guy Who Used to Be a Rapper,
and Now Stars in All of the Action Movies?
Yeah, I Think I May Actually Be Him in a Movie Right Now!

The Sick Video Game and an Explosion of Blond Curls

The Stutterer and the Flyer: The New Dream Team?

The Most Beautiful Death Storm Ever

The Rebels and the Cave

Another Pilot Would Be Nice Right About Now

Who Knew There Was an Ambassador Apt?
Now, That’s Useful!

A Change of Clothes and the City Entrance

Piper and a Viper

We Let Them Win a Tiebreaker

A Special Delivery We Wish Nobody Signed For

A History Lesson:
I Know . . . Sounds Boring, But It’s Important!

Seasick or Carsick or Airsick or Space-sick

Babies Could Be the Death of You

We Break a City

A Macram
é
of Silver Vines

“This generation a Shifter will arise,

Hidden amongst the lost and lies.

A great many will see

The life that could be.

The universe will shake;

The greatest among us will quake.

The towers will fall.

The ruled will rule all.”

Rian growled when a small group of Shifters entered The Council chamber following Navin and Lena.

Lena sauntered in, her hips swaying dangerously from side to side. Other than Rian, all eyes in the room were on her. Her long auburn hair was undulating behind her in a tight ponytail. Her green eyes were bright and cold. Her smirk revealed straight white teeth, poised and ready for the kill.

“My Lord,” Lena said in her throaty alto. She bowed then, carefully positioning her body in the most flattering way.

The new Seer on The Council, a small mousy man with flat brown eyes and little ability to see anything, gulped audibly as he watched Lena.

“I am not a feudal lord,” Rian snapped at Lena.

“Of course not,” Lena said, rising slowly, allowing the eyes in the room to linger on her lithe body. “You are my god.”

Rian’s eyes flicked to her, somehow his copper eyes were both irritated and pleased. He then returned them to the piece of Shifter trash that had entered the room with her. His copper eyes flashed red for a brief moment, appearing more vibrant and cruel than any eyes before.

“Navin,” he growled. It was almost as though when Rian ordered the deaths of the Shifter Young nearly thirteen years ago, he had become less than human. He had become a beast, a monster.

Navin held his head high, raising his chin and allowing his colorless eyes to meet Rian’s without fear. “Rian,” he said tightly, unafraid.

“How is it that you managed to allow the traitorous children their freedom, to announce our presence to the Ordinaries, and to flee from the weaklings all in one day? You have raised the level of failure; I didn’t realize just how inept you truly are,” Rian sneered.

“Why, brother, I didn’t realize that anyone could fail as badly as you, allowing the very same children to flee to a planet that you weren’t even aware existed. Had I known that I might match my twin brother, I might have tried harder. Could I have failed bigger?” Navin mused, eyeing the silver in his brother’s golden hair.

“I should kill you for your insolence!” Rian shouted.

The Council quivered in meek silence. All eyes were cast to the flat brown table, unable to look at either of the brothers. Finally, one spoke up. She had a tech-based power; specifically what her specialty was, Rian could never remember.

“Sir, if I may interject,” she said with a quiet voice. She pleaded with soft blue eyes. Her long brown hair cascaded in heavy waves down her back. She would have been beautiful, her pleas irresistible, if she were not so tired, so sad.

“No!” both brothers spat, and she returned her eyes to the table.

“Kill me if you must,” Navin said flatly, shrugging his shoulders. “It will not bring your son back to you. It will not change what you have done. It will not ensure your victory.”

“My Lord,” Lena spoke again, her yellow-green eyes full of cunning. She had always reminded Rian of a fox; intelligent, ruthless, a survivor. “Navin is no longer fit to command. Whether you deem death an appropriate punishment for his failure . . .” she shrugged as she trailed off, giving Navin an icy, hate-filled glare.

“And who,” Rian asked impatiently, “is fit to command?”

“I have seen these
children
,” she spat the last word as though it had a harsh, bitter taste. “I have fought them. You need a leader who is more cunning, more cruel, less prone to subtleties and symbolism. Navin is too theatrical to simply execute them.” She batted her eyelashes mockingly at Navin before continuing. “You need someone less inclined to the dramatic.”

Rian was growing impatient with Lena, even with her full lips and curves. “Who might that be?” he snapped, ready for this day to be over.

“Me,” Lena answered with a smirk.

Navin threw his head back in a full-bodied, deep throated laugh. When he finally controlled himself and wiped the tears from his eyes, he saw that his brother was glaring at him.

Rian could not force himself to care one way or another. He simply wanted his brother to shut up. “Done,” he answered curtly.

Rian, who had just stood up and turned to leave the room, whipped back to glare at Navin, copper eyes flashing a deep crimson. “Kill him!” Rian ordered, and the guards closed in.

Navin’s eyes stared up at him from a pool of blood gushing from the gash in his throat. Rian couldn’t help but smile down at his big brother, dying on The Council room floor. “Earth, like every other planet in this universe, is mine. My brother, you should have learned that by now.”

Rian turned and walked from the room as though it were merely another boring meeting about crops or taxes. His shoes made a slight squeaking sound on the marble floors. “Make sure that doesn’t stain!” he shouted without looking back.

The other council members fled from the room, knowing it was only a matter of time before they met a similar fate. Their long robes flew out behind them, catching in the blood, smearing a red trail behind them. The blood seemed to flow from them as though they were the source of all pain and suffering in the world.

Lena was left with only her followers in the great council chamber, grinning, clapping, dancing, and muttering to herself. She loomed over Navin’s dead body, staring into his colorless, lifeless eyes. “Haha! Earth is mine now, Navin. You are nothing! Nothing!”

She danced over his body, her auburn hair swaying in the light of the sunset as it flowed across her skin.

Finally she remembered the two Shifters behind her. The man was about her age with copper hair and eyes filled with violence. He stood, waiting for orders.

The girl was a beautiful young specimen with sunset red hair and a perfect body. Lena grinned at her, “Come here, my pet!”

Lena pet her long, soft red hair, still muttering. “We will rule Earth, my dear. We will take it from the Ordinaries.”

The girl’s bright green eyes smiled up at Lena. “We will kill the Young, won’t we, Mother? Tanner? Ryland?”

Lena’s grin widened. “Oh, Devon, we will slaughter them all.”