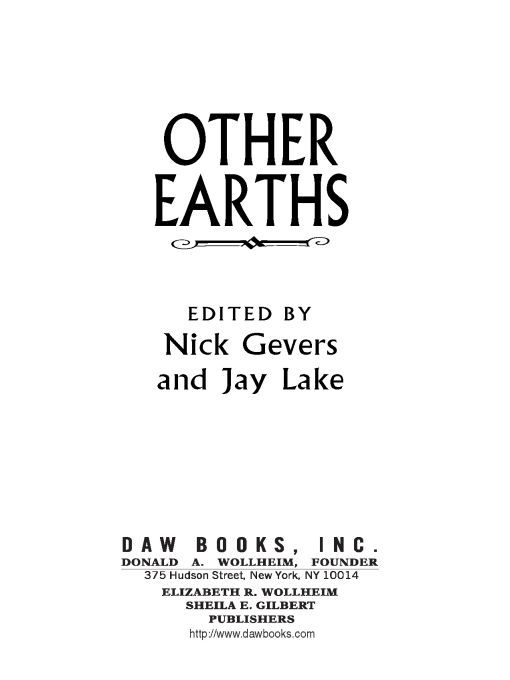 Table of Contents
Title Page
Copyright Page
Acknowledgements
Introduction
THIS PEACEABLE LAND; OR, THE UNBEARABLE VISION OF HARRIET BEECHER STOWE
THE GOAT VARIATIONS
THE UNBLINKING EYE
CSILLA’S STORY
WINTERBORN
DONOVAN SENT US
THE HOLY CITY AND EM’S REPTILE FARM
THE RECEIVERS
A FAMILY HISTORY
DOG-EARED PAPERBACK OF MY LIFE
NINE ALTERNATE ALTERNATE HISTORIES
About the Authors
“You can turn around and face me now, Mr. Churchill.”
Von Steigerwald stepped back, smiling. “Is this the Mauser you used at Omdurman?”
Churchill shook his head as he straightened his shabby coat. “That is long gone. I took the one you’re holding from a man I killed. Killed today, I mean.”
“A German?”
Churchill nodded. “The officer of the guard. He was inspecting us—inspecting me, at the time. I happened to say something that interested him, he stayed to talk, and I was able to surprise him. May I omit the details?”
“Until later. Yes. We have no time to talk. We’re going back. I am still an S.S. officer. I still believe you to be an English traitor. I am borrowing you for a day or two—I require your service. They won’t be able to prevent us without revealing that you escaped them.” Von Steigerwald gave Churchill a smile that was charming and not at all cruel. “As you did yourself in speaking with me. They may shoot us. I think it’s much more likely that they’ll simply let us go, hoping I’ll return you without ever learning your identity.”
“And in America . . . ?”
“In America, Donovan wants you, not Kuhn. Not the Bund. Donovan knows you.”
Slowly, Churchill nodded. “We met in . . . in forty-one, I think it was. Forty would’ve been an election year, and Roosevelt was already looking shaky in July—”
They were walking fast already, with Churchill a polite half-step behind; and Von Steigerwald no longer listened.
—From “Donovan Sent Us” By Gene Wolfe
Also Available from DAW Books:
AGES OF WONDER edited by Julie E. Czerneda and Rob St. Martin
Fantasy—the very word conjures infinite possibilities. And yet far too often, writers limit themselves to a few well-mined areas of the vast fantasy realms. But the history of our world offers many cultures and areas rich in lore and legend that have barely been explored. And so we have AGES OF WONDER. The nineteen tales included here take us from the Age of Antiquity to the Age of Sails, the Colonial Age, the Age of Pioneers, the Pre-Modern Age, and the Age Ahead. Join these adventurers as they explore all that fantasy has to offer in stories ranging from a Roman slave forced to seek a witch’s curse to aid his master . . . to an elemental trapped in a mortal’s body unable to reach for the power of the wind . . . to a family of tree-people hoping to find a new life in America . . . to a Native American tribe’s search for a new hunting ground and the one girl whose power could prove the difference between life and death . . . to the impact of technology on those who live by magic . . . and the Age that may await when science and magic combine into something new.
WE THINK, THEREFORE WE ARE edited by Peter Crowther
Writers have been telling stories about sentient robots, computers, etc., since the Golden Age of science fiction began. Now fifteen masters of imagining have turned their talents to exploring the forms AIs may take in the not too distant future. Here are the descendants of Robby the Robot, the Terminator, and the Bicentennial Man, by authors such as Stephen Baxter, Brian Stableford, James Lovegrove, Tony Ballantyne, Robert Reed, Paul Di Filippo, Patrick O’Leary, Ian Watson, and others.
IMAGINARY FRIENDS edited by John Marco and Martin H. Greenberg
When you were a child, did you have an imaginary friend who kept you company when you were lonely or scared, or who had the most delightful adventures with you? For anyone who fondly remembers that unique companion no one else could see or hear, here is a chance to recapture that magical time of your life. Join thirteen top imaginers like Rick Hautala, Anne Bishop, Juliet McKenna, Kristine Kathryn Rusch, Kristen Britain, Bill Fawcett, Fiona Patton, and Jim C. Hines, as they introduce you to both special friends and special places in their spellbinding tales. From the adventurous doings of a dragon and a boy . . . to a young woman held captive in a tower, and the mysterious being who is her only companion, though he can’t enter her room . . . to a beggar, bartender, and a stray dog in the heart of Nashville . . . and a woman who seems to have lost her creativity until a toy Canadian Mountie suddenly comes to life . . . you’ll find an intriguing assortment of comrades to share some of our time with. 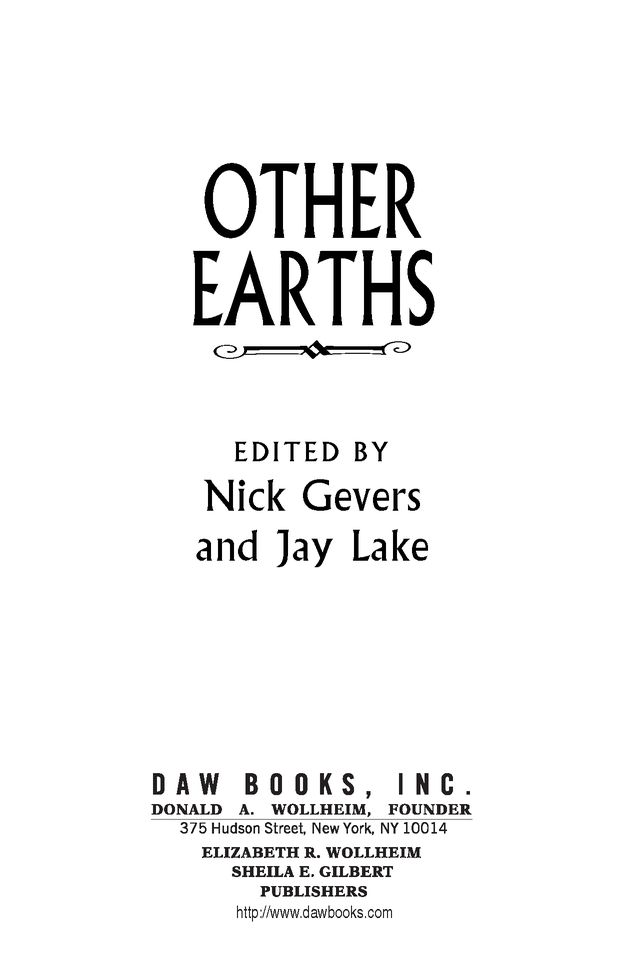 Copyright © 2009 by Tekno Books, Nick Gevers, and Joseph E. Lake, Jr.
All Rights Reserved.
DAW Book Collectors No. 1472.
DAW Books are distributed by Penguin Group (USA).
All characters in this book are fictitious.
Any resemblance to persons living or dead is coincidental.
The scanning, uploading and distribution of this book via the Internet or any other means without the permission of the publisher is illegal, and punishable by law. Please purchase only authorized electronic editions, and do not participate in or encourage the electronic piracy of copyrighted materials. Your support of the author’s rights is appreciated.

ACKNOWLEDGMENTS
Introduction copyright © 2009 by Nick Gevers and Joseph E. Lake, Jr.
“This Peaceable Land, or, The Unbearable Vision of Harriet Beecher Stowe,” copyright © 2009 by Robert Charles Wilson
“The Goat Variations,” copyright © 2009 by Jeff VanderMeer
“The Unblinking Eye,” copyright © 2009 by Stephen Baxter
“Csilla’s Story,” copyright © 2009 by Theodora Goss
“Winterborn,” copyright © 2009 by Liz Williams
“Donovan Sent Us,” copyright © 2009 by Gene Wolfe
“The Holy City and Em’s Reptile Farm,” copyright © 2009 by Greg van Eekhout
“The Receivers,” copyright © 2009 by Alastair Reynolds
“A Family History,” copyright © 2009 by Paul Park
“Dog-Eared Paperback of My Life,” copyright © 2009 by Lucius Shepard
“Nine Alternate Alternate Histories,” copyright © 2009 by Benjamin Rosenbaum
INTRODUCTION
Nick Gevers and Jay Lake
I
n a sense, all fiction is alternate history. Did Odysseus rule in Ithaca? Where is Jack Aubrey in the recorded naval annals of the Napoleonic period? Did Rabbit Angstrom really play high school basketball? These characters are people that never were—that is what makes them part of fiction, after all.
Works that meet a relatively formal definition of alternate history have been with us since at least the nineteenth century. Aside from occasional fascinating literary sallies by the likes of Nathaniel Hawthorne and Benjamin Disraeli, most early counterfactual fictions were jingoistic wish-fulfillments or utopian whimsies, followed somewhat later by academic
gedankenexperimenten
. With the evolution of modern science fiction, alternate history came along for the ride, enriching the genre with visions of altered actualities to complement those of distant planets and turbulent futures.
Today alternate history is in its own right a major subgenre of speculative fiction. There are superstars such as Harry Turtledove and Eric Flint, more experimental efforts from Esther Friesner, Kim Stanley Robinson, and Christopher Priest, and continued incursions from literature by way of writers such as Peter Ackroyd and Philip Roth. Alternate history even has its own award, the Sidewise, named in honor of the seminal Murray Leinster short story “Sidewise in Time.” The award is administered by the estimable Steven H. Silver, whose dedication to the form is legendary.
Alternate history is alive and well and living on bookshelves worldwide. So why this anthology? Because, rightly or wrongly, alternate history has come to form a ghetto of its own within speculative fiction. A very large portion of the alternate history canon is concerned with militaria, fiction about soldiers and the wars they fight. This is as if an entire symphony orchestra were represented only by the brass section; however grand, the brass quickly becomes monotonous playing on its own.
We solicited work from among the best writers in the field. Some are masters of the genre, with the sort of deep thought and brilliant voice that makes a book such as this eminently rewarding. Others are newer players becoming well known for their achievements in urban fantasy, new weird, and all the other movements and subgenres of the past decade or two.
We felt that the form would benefit from being challenged by these sharply innovative voices. These are writers who can produce fascinating work in striking out across the countries of the mind where Lincoln was just a country lawyer, Ralph Vaughan Williams was only a soldier, and Bugsy Siegel was a Knight Templar. Even better, they can take us to places where the shift of history was something else entirely—a faery queen on England’s throne, stars missing from the summer sky, an endless spiral of time along the shores of the Mekong. In short, this book is intended to be a showcase of what can be done by some of the most brilliant minds writing today, many working in a form not normally their own.
Like a microcosm of speculative fiction, alternate history’s name is legion, for it is many, with a multitude of potentials. This collection brings new names and new ideas to this old and honorable field. With luck, it will bring new readers as well.
THIS PEACEABLE LAND; OR, THE UNBEARABLE VISION OF HARRIET BEECHER STOWE
Robert Charles Wilson
“
I
t’s worth your life to go up there,” the tavernkeeper’s wife said. “What do you want to go up there for, anyway?”
“The property is for sale,” I said.
“Property!” The landlady of the roadside tavern nearly spat out the word. “There’s nothing up there but sand hills and saggy old sheds. That, and a family of crazy colored people. Someone claims they sold you that? You ought to check with the bank, Mister, see about getting your money back.”
She smiled at her own joke, showing tobacco-stained teeth. In this part of the country there were spittoons in every taproom and Bull Durham advertisements on every wall. It was 1895. It was August. It was hot, and we were in the South.
ADS
15.4Mb size Format: txt, pdf, ePub