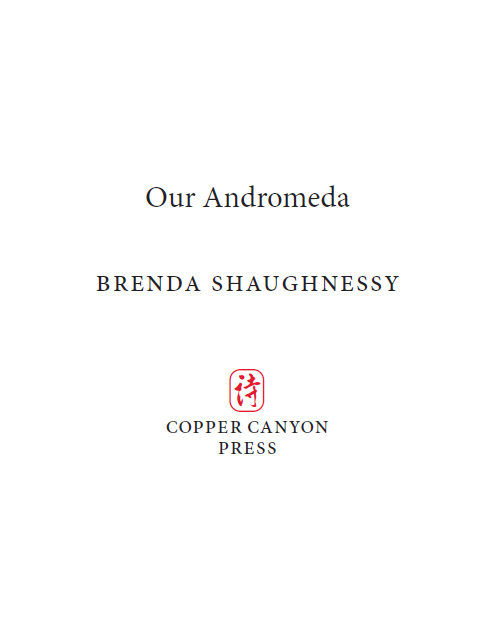 Note to the Reader

Copper Canyon Press encourages you to calibrate your settings by using the line of characters below, which optimizes the line length and character size:

Please take the time to adjust the size of the text on your viewer so that the line of characters above appears on one line, if possible.

When this text appears on one line on your device, the resulting settings will most accurately reproduce the layout of the text on the page and the line length intended by the author. Viewing the title at a higher than optimal text size or on a device too small to accommodate the lines in the text will cause the reading experience to be altered considerably; single
lines of some poems will be displayed as multiple lines of text. If this occurs, the turn of the line will be marked with a shallow indent.

Thank you. We hope you enjoy these poems.

This e-book edition was created through a special grant provided by the Paul G. Allen Family Foundation. Copper Canyon Press would like to thank Constellation Digital Services for their partnership in making this e-book possible.

is my heart. A stranger

berry there never was,

Gone sour in the sun,

in the sunroom or moonroof,

No poetry. Plain. No

All I've ever made

but making much smoke

in the old smokehouse,

Fatted from the day,

in the end, if you must

know, if I must bend,

No marvel, no harvest

yet I find myself

That loud hub of us,

meat stub of us, beating us

Spectacular in its way,

its way of not seeing,

In that hopeful haunting

in darkness) there is

for the pressing question.

Heart, what art you?

from the one who loves,

Stop belonging to me so much, face-head.

Leave me to my child and my flowers.

I can't run with you hanging on to me like that.

It's like having ten dogs on a single lead

and no talent for creatures.

No hands, no trees. Not my dogs, nobody's.

Don't you have a place to go, face-head?

Deep into the brick basement of another life?

To kill some time, I mean. That furnace

light could take a shine to you.

There are always places, none of them mine.

but that stuff's extra, it's never in supply.

“Never,” however, acres of it. Violet beans

and sarcasm. Too many flavors of it.

All those prodigal particles,

of glitches. The chorus just
more us.

But nowhere bare and slippery have I

got a prayer. If I had two hands

to rub together I wouldn't waste the air.

though I know they're not.

I don't understand why they lead me

around, why I can't explain to the cop

how the pot got in my car,

with god resembled that

of a prisoner and firing squad

and how I felt after I was shot.

Because then, the way I felt

was feelingless. I had no further

I was free from the sharp

tongue of the boot of life,

from its scuffed leather toe.

ninety-eight degrees in the shade

but there is no shade,

never even a sliver.

What if all possible

pain was only the grief of truth?

only in the exit wounds,

though the entries were the ones

that couldn't close. As if either of those

was the most real of an assortment

under one sky's roof.

But my feelings, well,

they had no such proof.

The sun has its nemesis, evil twin star,

not its opposite but its spirit,

who become us, year after ancient,

to our faeries, our animals and gods:

donated to the wrong body.

Why aren't they dear to us?

Why is that child least loved

by its own grown self?

If you aren't me then be banished from me,

weird orphan with limp and lisp.

Who, nameless brainsake, are you?

Not my substance or my shadow

but projectile vomit, a noxious gas.

says the adult, looking back into wormhole

as if jumping into foxhole.

Not me, never again: that terrible child

and bad mom and sameself sister,

and monotone uncle and messed-with cousins,

and let's not even talk about the father,

Perhaps the Andromedans are such early

versions of us we can't hate yet, ghosts

or our pre-living selves, earliest babies.

a robot cook or a motion detector,

or claim to know,

somehow. We say so, said so, toldya so.

That's what you get for believing in aliens,

for replacing our earhorn of plenty

with a megaphone of corpsedust.

Listen, it's moving closer, the Andromeda

Galaxy, this other us, this museum of mucus

that their governments are already optimized

to keep post-digitally. All of which looks

much more like a craps game to us, a hinky

no one but addicts can tolerate.

Only 2.5 million light-years away, lessening

space, of course, made of light. Just flip

the switch and poof. We're there.

The space, then, the dog-run-sized length

between the golden retriever

and the Labrador retriever,

isn't so much space as time, and since time

is breathâ¦well. Take a deep one.

We have all day, as a matter of objective fact.

Slip on a glossy patch of antimatter

and I've inhaled my unutterable

opposite potential self, smeared out

the tracing of my nemesis: Olympic

at night and call out but can't ever know

in this world. Such a thing is called a soul?

O funny other self,

how I long to know you! You were ingested

in the desert. Even in the evening.

For there are no light years. Years are heavy.

There is only light. It never bends:

that's the property it mortgaged in order

to pick up speed. But parallel lines can meet

Some criminal sharing my name

or an alien name sharing my crime.

The rules are there are no rules.
Lingua franca.

Isn't the space between what is

and what coulda woulda Buddha been,

that same space between short skull

for supple expression, for saying

and blaming and braying and allaying

and naming:
I this
not
I that,
tit not tat,

want not waste, and
yes
not
yes, butâ¦

tells you over and over to shut,

to smile, first to not talk to strangers

and then be kind to them.

To sponsor the tail of another winner's

horse. To Go for It.

To become something in this life.

But once the gardenias

are floating in seawater for the themed gala

of your body, this special night,

they are dying, bacteria or no bacteria,

life against life, this world

butted up against the next.

Simultaneity aside, we are all next.

All go to the light.

Heavily, with our childhoods we go.

I'll go with my stars,

and my sorry body, stranger

to myself, will say go.