Read Our Man In Havana Online

Our Man In Havana 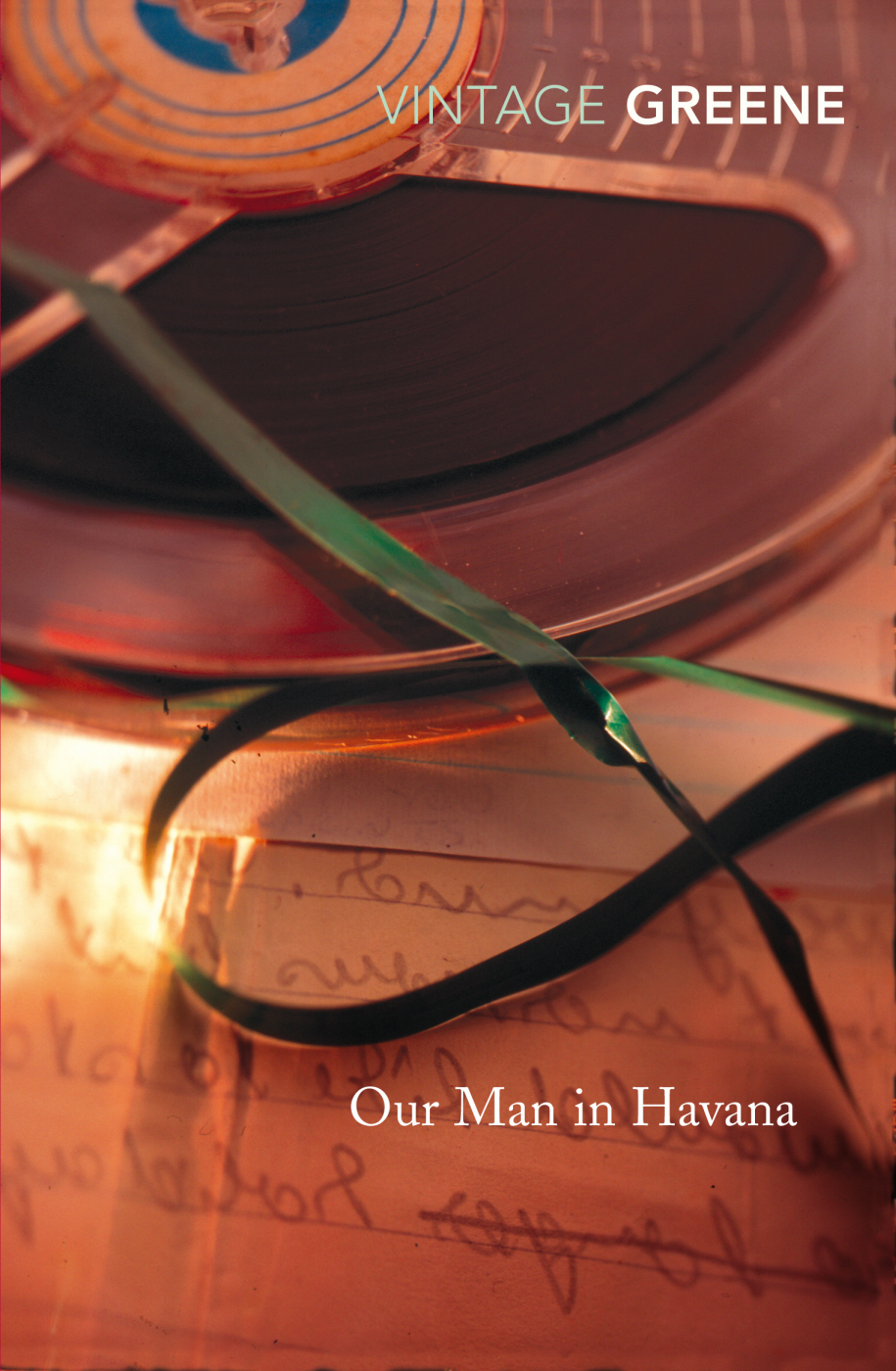 Wormold is a vacuum cleaner salesman in a city of powercuts. His adolescent daughter spends his money with a skill that amazes him, so when a mysterious Englishman offers him an extra income; he is tempted. In return all he has to do is file a few reports. But when his fake reports start coming true, things suddenly get more complicated and Havana becomes a threatening place.

Graham Greene was born in 1904. On coming down from Balliol College, Oxford, he worked for four years as sub-editor on
The Times
. He established his reputation with his fourth novel,
Stamboul Train
. In 1935 he made a journey across Liberia, described in
Journey Without Maps
, and on his return was appointed film critic of the
Spectator
. In 1926 he had been received into the Roman Catholic Church and visited Mexico in 1938 to report on the religious persecution there. As a result he wrote
The Lawless Roads
and, later, his famous novel
The Power and the Glory. Brighton Rock
was published in 1938 and in 1940 he became literary editor of the
Spectator
. The next year he undertook work for the Foreign Office and was stationed in Sierra Leone from 1941 to 1943. This later produced the novel,
The Heart of the Matter
, set in West Africa.

As well as his many novels, Graham Greene wrote several collections of short stories, four travel books, six plays, three books of autobiography –
A Sort of Life, Ways of Escape
and
A World of My Own
(published posthumously) – two of biography and four books for children. He also contributed hundreds of essays, and film and book reviews, some of which appear in the collections
Reflections
and
Mornings in the Dark
. Many of his novels and short stories have been filmed and
The Third Man
was written as a film treatment. Graham Greene was a member of the Order of Merit and a Companion of Honour. He died in April 1991.

A Gun for Sale

The Ministry of Fear

The End of the Affair

Travels with my Aunt

Dr Fischer of Geneva or

The Power and the Glory

The Heart of the Matter

The Captain and the Enemy

The Last Word and Other Stories

In Search of a Character

Getting to Know the General

Mornings in the Dark

A Sort of Life

Fragments of an Autobiography

A World of my Own 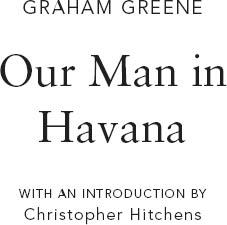 [In Havana,] ‘where every vice was permissible and every trade possible, lay the true background for my comedy.’

Graham Greene famously subdivided his fictions into ‘novels’ and ‘entertainments’ (this present one falling with a slightly suppressed chuckle into the second category) as if to slyly warn his audience that an element of the ludic and the flippant would sometimes be permitted to him and should be forgiven by his readers. If, in his infrequent confessions, he might have mentally reclassified some offenses as venial rather than mortal, something of the same analogy holds throughout his work.

I should like to propose a third or subcategory: the whisky (as opposed to the non-whisky) fictions. Alcohol is seldom far from the reach of Greene’s characters, and its influence was clearly some kind of
daemon
in his work and his life. A stanza of that witty and beautiful poem
On The Circuit
, written in 1963, registers W.H. Auden’s dread at the thought of lecturing on a booze-free American campus and asks, anxiously and in italics:

Is this a milieu where I must

How grahamgreeneish! How infra dig!

Snatch from the bottle in my bag

Describing a visit to a 1987 conference of ‘intellectuals’ in Moscow in the early Gorbachev years, both Gore Vidal and Fay Weldon were to record Greene making exactly this dive into his handy and bottle-crammed briefcase. ‘Analeptic’ literally means ‘healing’, and there was no doubt of a buried connection in Greene’s mind between the properties of holy water and the redeeming qualities of raw spirit. In at least three of his literary ventures Greene chose to make the subject a central one. The lost but resigned little fugitive cleric in
The Power And the Glory
(1940) is actually aching at all times for a shot of brandy, but the Mexican vernacular deems his type ‘the whisky priest’. The burned-out figures of British intelligence in
The Human Factor
(1978) seem at times to be engaged in some sort of contest to amass the greatest number of ‘blend’ labels, from J&B to Johnnie Walker, and even to create a new pseudo-scotch by mixing White Label and Johnnie Walker on the grounds that ‘They’re all blends anyway.’

The view that both sides in the Cold War were an admixture – at best – of each other’s hangover-inducing ingredients was an abiding belief of Graham Greene’s, and is never more on show than in this miniature drama, and drama of miniatures. The action commences in a bar and almost every subsequent moment in the story is set in a place where alcohol is dominant. To speak generally, if not absolutely, one may say that dependence on booze is a symptom of weakness, and although JimWormold (not a name to inspire immediate confidence) does turn out to possess a few latent strengths, he is presented from the first as a feeble man who both
is
a hostage – to his own poverty and inanition – and who
has
a hostage: his foal-like sixteen-year-old daughter Milly. This girl, a combination of slight tart and vague Madonna striding through the worldly and corrupt streets of Havana, makes the hapless vacuum cleaner salesman a prisoner of her childhood, and of his own. How wrenched yet charmed he is, having lost the wife to whom he promised that Milly would be educated as a Catholic, to hear the little girl solemnly praying ‘Hail Mary, Quite Contrary’. Yet how oppressed he is by the recollection of his own misery as a schoolboy:

Childhood was the germ of all mistrust. You were cruelly joked upon and then you cruelly joked. You lost the remembrance of pain through inflicting it.

(Many is the Greene novel and reminiscence, most conspicuously
Brighton Rock
, where this trope of sadistic bullying makes its twitchy appearance. The slightly older boy who so relentlessly tortured him in his public-school days – a boy named Lionel Carter, as it happens – has put us eternally and unintentionally in his debt. And let us not forget that, as both tormentor and victim would have been taught: ‘In the lost boyhood of Judas, Christ was betrayed.’)

Evidently resolving – for purposes of the ‘entertainment’ – not to make all this too lugubrious, Greene introduces Milly rather as Evelyn Waugh presented the more-ominously named Cordelia in
Brideshead Revisited
. That good/bad little girl once made a novena for her pet pig, and was mentioned in her convent school report as the naughtiest girl in the memory of the oldest nun. She ended up by volunteering to be a nurse for the forces of General Franco. Milly unknowingly gratifies her father by setting fire to a teasing schoolmate named Thomas Earl Parkman, Junior; shows her class the collected postcards of great aesthetic nudes, and gives artless yet casuistic replies to direct questions from her easily-baffled and highly-impoverished single parent. She also offers novenas in the hope of acquiring a horse, and allows herself to be escorted by the saturnine Captain Segura: a man who would have seemed exceptionally sadistic even in the ranks of Franco’s phalanx.

Thus it is made as clear as possible, within a few pages of the opening, that Wormold is living a life of quiet desperation. He cannot go on as he is, but he is set in his ways and wedded to mediocre respectability. This would be dire enough even if – like Henry Pulling in
Travels With My Aunt
– he was back in suburban Wimbledon. But in exotic Havana, with business going poorly and with a burgeoning daughter to boot, he is additionally expected to keep up appearances as an awkward Englishman abroad. Yet this is precisely what makes him attractive to Hawthorne, the relentlessly incompetent envoy of British Intelligence who decides to sign him up as a sub-agent and (within limits) ‘put him in the picture’. To us, Hawthorne seems like yet another English
naïf
in the tropics, concerned like any harassed salesman with giving a pleasing impression to his ultimate boss in London, but to the hunted and needy Wormold he belongs to ‘the cruel and inexplicable world of childhood’, and it thus feels like no more than natural justice to exploit him and fleece him to the very hilt. The two men do, however, have an initial bond. When they meet in Sloppy Joe’s bar, Hawthorne surveys the range of bottles on offer and says:

The Loom by Sandra van Arend
From Russia With Claws by Jacey Conrad, Molly Harper
Masked & Miserable: A Novella of the Sacred Hearts MC (Book 3.5) by Downey, A.J.
Summer Attractions by Beth Bolden
Bethany's Rite by Eve Jameson
Tablet of Destinies by Traci Harding
Bare Assed by Alex Algren
The Bare Necessities (Non-Profane Edition) by John Harding
The Power of Love by Serena Akeroyd
An Evil Eye by Jason Goodwin