Read Out of the Dark Online

Out of the Dark 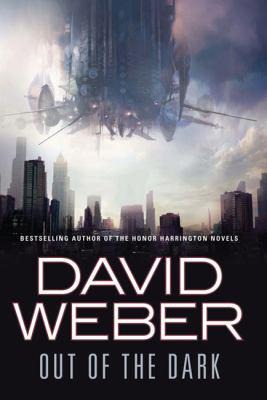 Out of the Dark

For Fred and Joan Saberhagen.
Friends and inspirations, in more than one way.
I hope you like Basarab, Fred!

“Garsul, are you
watching
this?”

Survey Team Leader Garsul grimaced. Just what, exactly, did Hartyr
think
he was doing? Of all the stupid, unnecessary, infuriating—

The team leader made himself stop and draw a deep breath. He also made himself admit the truth, which was that as effortlessly irritating as Hartyr could be anytime he tried, there was no excuse for allowing his own temper to flare this way. And it wouldn’t have been happening if he hadn’t been watching . . . and if both his stomachs hadn’t been hovering on the edge of acute nausea. Then there were his elevated strokain levels, not to mention the instinctual fight-or-flight reflexes (mostly
flight
in his species’ case, in point of fact) quivering down his synapses.

“Yes, Hartyr, I’m watching,” he heard his own voice say over the link. He knew it was his voice, even though it seemed preposterously calm given what was going on inside him at the moment. But his next words betrayed the fact that his calm was only voice-deep. “And did you have something in mind for us to
do
about it?” he asked pointedly.

Hartyr’s reply began strongly only to taper off plaintively, and Garsul felt most of his irritation dissipate into something much more like sympathy. His deputy team leader’s natural officiousness and pomposity were an undeniable pain in the excretory orifice, and his fanatical devotion to paperwork was rare even among Barthoni. Hartyr was also prone to assume his answer was always the
right
answer to any problem that came along, and he was a pusher—the sort of fellow who would trample his own dam and herd brothers in pursuit of the tastiest grazing. But at this moment the sick horror echoing in the depths of his voice was completely understandable. It wasn’t going to make him
likable
(nothing was ever likely
to accomplish
that
miracle), but Garsul felt an unusually powerful sense of kinship with Hartyr as he heard it.

“I wish there were something we could do to stop it, too,” he said more quietly. “Unfortunately, there isn’t. Unless we want to break protocol, at least.”

He heard Hartyr inhale at the other end of the link, but the deputy team leader didn’t respond to that last sentence. It did put their options—or, rather, their
lack
of options—into stark relief, Garsul reflected. The Hegemony Council had established its survey protocols long ago, and the Barthoni had played a prominent part in their creation. There was an excellent reason for each and every aspect of the protocols’ restrictions . . . including the need to restrain the enormous temptation for a survey team to intervene at a moment like this.

“Make sure Kurgahr and Joraym are recording this,” he said now. He could easily have passed the message himself, but it was kinder to give Hartyr something to do. “This is going to be an important part of our final report.”

The easygoing, centaurlike Barthoni were singularly ill-suited to the sort of spit and polish some of the Hegemony’s other member species seemed to favor. A few of those other races made bad jokes about it, Garsul knew, but that was all right with him. He and his team didn’t need a lot of “sirs” or bowing and scraping to get on with their jobs. They knew who was in charge, just as they knew each of them (likable or not) was a highly trained and invaluable specialist. And every one of them was a volunteer, out here because they were the sort who always wanted to see what was on the other side of the next hill. And perhaps even more importantly, because of their race’s species-wide commitment to what the Hegemony Survey Force stood for.

Unlike some
other
species I could mention
, he thought sourly, and returned his attention to the visual display.

The planet they were currently surveying—designated KU-197-20—was a pleasant enough place. Its hydrosphere was a little more extensive than most Barthoni would really have preferred, and the local vegetation would have been poorly suited to their dietary requirements. But the temperature range was about right, and however unsustaining the planetary plant life might be, parts of it were tasty enough, and it came in shades of green that were undeniably easy on the eye.

At the moment, the scene the survey remotes were showing him was less
green than it could have been, for a lot of reasons. First, because the area he was watching was well into local autumn, splashing the landscape with vivid color . . . and showing more than a few bare limbs, as well. Secondly, because those remotes were focused on a narrow strip of open ground between two patches of woodland, and that strip had been recently plowed. The even more recent rain had transformed the turned earth into a mud bath deep enough to satisfy even a Liatu, just waiting to happen. Which, he thought, only underscored the insanity of what he was watching. Surely the lunatic local sentients (and he used the term loosely) could have found a better spot for their current madness!

The new voice on the link belonged to Joraym, the team’s xenoanthropologist, and Garsul was darkly amused by his tentative tone. Joraym was the team member who’d been most insistent on their remembering that the local sentients—“humans,” they called themselves—were still mired deep in their planetary childhood. One could scarcely expect them to act like adults, and it would be both unfair and unjust to hold their behavior to the standards of
civilized
races. The team leader couldn’t quibble with Joraym’s analysis of KU-197-20’s dominant species, but the xenoanthropologist had been looking down his snout for “Barthoncentric prejudice” at anyone who criticized the “humans” ever since they’d arrived in-system. Garsul suspected it was Joraym’s way of demonstrating his own enlightened superiority to his teammates.

“Can I deploy some audio remotes?” the xenoanthropologist requested.

“Why in Clahdru’s name d’you want to do
that
? The
video’s
going to be bad enough!” Garsul made a harsh sound deep in his throat. “I hope the Council’s going to put this under scholar’s seal when we get it home, but even some of the scholars I know are going to be losing their lunches if this is
half
as bad as I think it’s going to be!”

“I know. I know!” Joraym sounded unhappy, but he also sounded determined. “It’s not often we get a chance to actually see something like this happen, though,” he continued. “
We
don’t do it, and neither do most of the other races, but from what we’ve been able to determine about the local societal units, these . . . people think this is a reasonable way to settle political differences. Hopefully, if I can get the pickups close enough to the leaders on each side, I’ll be able to establish that and monitor their reactions and decisions as the . . . effort proceeds.”

“And just why is that so important?” Garsul demanded.

“Because some of my colleagues back home are going to reject my analysis without a hell of a lot of supporting data. It’s so
alien
to the way we think.”

Vacation to Die For by Josie Brown
Carolyn G. Hart_Henrie O_05 by Death on the River Walk
The Hooker: A Reprehensible Acts Story by Simon Wood
Body in the Gorge (Cockatoo Cozy Mystery Series Book 1) by Lyn Walker
Cherish & Blessed by Tere Michaels
Vaporware by Richard Dansky
The Lesson by Jesse Ball
Posey (Low #1.5) by Mary Elizabeth
All in the Chemistry [The Royal Wolves 4] (Siren Publishing Allure) by Honor James
Star Soldier by Vaughn Heppner