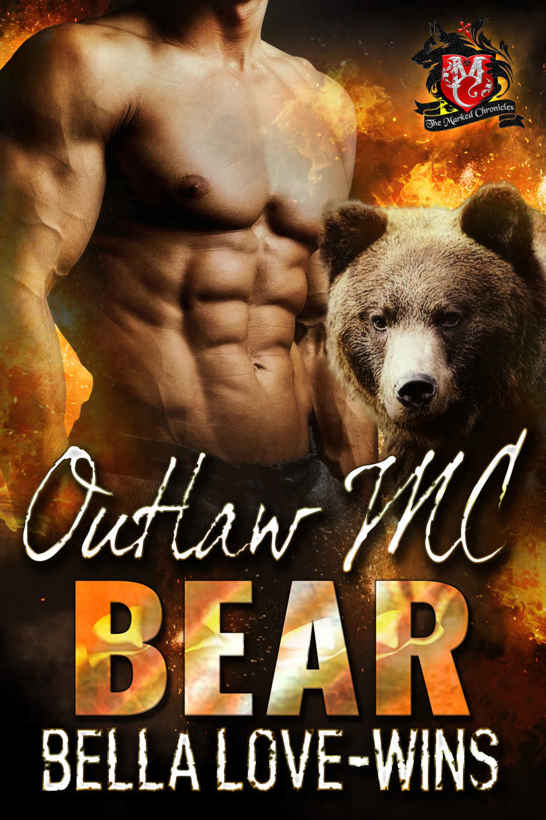 Books in the Marked Chronicles

Follow the link below and enter your email address to get notified of updates, promotions and new Bella Love-Wins shifter romance titles.

Send me a friend request:

Become a Fan of The Marked Chronicles:

“
A
re you sure
, Si? Just because it’s what the club’s always done, doesn’t mean we can’t switch it up…or shouldn’t. Our old men had their backs in a corner. We have a lot more options.”

“Just trust me.” Silas Corrigan slapped his Sergeant at Arms and best friend on the back through his leather cut. “I haven’t fucked up our money stream yet, right?”

Axe Voltaire grunted and poured them another shot of Jack Daniels. He took a swift swig straight from the bottle, slamming it back down on the clubhouse bar. “Doesn’t mean you can’t still fuck it up.”

A curvy blonde leaned against the long mahogany bar between the two grizzly bear shifters and ran a painted fingernail down Silas’s forearm. She smiled seductively, and had a sultry look in her eye that was as subtle as being hit in the face by a Mack truck. There wasn’t a question where she’d be tonight. Silas warmed up real quick to the idea of her jammed between his thighs. He gave her a smirk, leaning forward so he could enjoy the revealing view of her cleavage in that silky halter top.

“Watch your language, boys,” she admonished with a giggle. “I love a dirty mouth.”

“I’m way more interested in what that sweet little mouth of yours can do besides talking,” Silas growled, throwing back his shot. He slid the shot glass over to Axe and didn’t have to look over to know he was getting a refill.

“Why don’t you come with me and find out?” she teased.

Silas gave Axe a head nod and got off his bar stool. “Give me a second, brother.” He followed the blonde across the clubhouse common room and down a quieter hallway, stopping halfway down the corridor. “Show me what you got.”

The little vixen was not shy. She dropped to her knees, and began to tug feverishly at Silas’s belt and zipper, eyes seductive, bright red lips parted and ready. He was hard just looking down at her. Which was good, because her hand reached into his pants and freed his dick just then. She ran her hot, slick tongue up and down his shaft, and those sexy lips wrapped around the head, suctioning him so hard he had to grip her hair to stop himself from coming right there and then.

Pulling her to her feet, he gave her a wink and then buttoned his fly. “Nice work, doll. Let’s do that again sometime.”

She giggled and sauntered off to the back of the clubhouse, and Silas returned to his drink at the bar. “Where was I?”

“This meeting you insist on going to on your own.”

“Right. What do you think is gonna happen tonight? We’ve already done hard time. There isn’t a lower level of hell out there. I’ve got your back, so just follow my lead.”

He drew his gaze toward the blonde groupie who’d just returned to the other end of the bar, standing with one of the chicks they called ‘twisted claws’ in their motorcycle club.

“Cool. So on this new deal, you’re asking for a lot on blind faith, Si.”

“Half the fun of brotherhood, my man.”

They clinked glasses, then he knocked back another one. The rush of liquor burned the lining of Silas’s stomach, and he grimaced as the world went a little fuzzy. Which was perfect for what was on tap for tonight. Wrapping up the simple arms deal with the Italian mafia tonight was pretty much standard operations, something that happened every other Friday night in their world. Tonight was only slightly different. They were a little too close to a full moon for outside activities. That panther shifter club a few miles down the road packed up with enough ballsy loose cannons on regular nights. The full moon, however, brought out a much bigger batch of the fuckers. Silas was not in the mood for deviating from tonight’s routine. He cleared his throat. Time to get his head back in the game.

“Silas?” The blonde purred out his name while her palms crept up his bicep and grazed underneath his cut. When she started massaging his shoulders, he was damn near close to letting her continue the game she began, except those hands would need to wander down inside his pants for him to make another move right now.

“Listen, sweetheart. I got some business to take care of, but you look like a nice tight ride, perfect for bending you over when I get back.” He skimmed his fingers along her soft cheek down to her chin. “Raincheck until then?”

She crinkled her nose and pouted. “Okay,” she whined.

He slid the next shot her way. “Have a drink. It’ll keep you warm until then.” He hopped off the bar stool and pivoted away from her before the feisty chick could get her claws to grip his cut.

A few more twisted claw bombshells navigated toward his orbit, and Silas reminded himself to give props to whoever had the task of recruiting pussy in the place. Tonight was planned out though, and he had a schedule to stick to. Raising a hand to ward off the sweet pieces of ass on the approach, he passed through the thick crowd of people that the Beartooth Brotherhood, his motorcycle club, called their extended family. Without looking around, he knew that Axe was following his lead. Their business shit was a little too sensitive to be addressed in the open area of the clubhouse. They could never be too careful in the business they were in. No one needed overinflated lips to spill secrets to the wrong guy with a bike, half-decent ink and an open wallet.

The second he closed the door to the meeting room, Axe started laughing so hard Silas thought the man might end up busting a nut. He looked his best friend up and down, leaning against the club table. When the laughter kept on rolling, Silas lit a cigarette, crossed his arms, and cracked his neck.

“Did I miss hell freezing over or did you just turn down tail like you were becoming a monk or something?” Axe coughed into his fist, trying to control his laughter. “You batting for the other team now, buddy? Had a change of heart?”

“And make your little fantasy come true? Keep dreaming.” Silas threw a lazy punch out toward the other guy’s jaw, and Axe had precious little time to dodge out of the way.

“Fuck!” Too busy clutching his stomach from cracking up, the burly man nearly fell flat on his back but caught his balance on the side of a meeting room chair.

Silas shook his head. “Get your head back in the game, man. We’re taking this club in a damn good direction. We get bigger payoffs, which means bigger payouts. It gives us a shorter route to the end game. Yes, it’s dangerous shit, but the more we do this now, the quicker we can get out while it’s good. Make sense? High risk, high reward.”

He watched while his best friend since childhood sobered up, scrubbing a hand down his face and drawing two fingers down his black goatee.

“It always sounds great in theory, man. I’m just…tired.” Axe let out a sigh and rearranged himself in the large leather rolling chair. “I can’t do any more time after that last stint.”

Silas took another drag of the cigarette, flicking open the pack and offering one out. “You think not wanting to get locked up for another nickel gives you the right to talk like a pussy, don’t you?”

Their gazes locked. Axe jerked a smoke out of the pack and lit up. Silas was one of a handful of people who could get away with talking to Axe like that. The man had little to no patience, and would beat the shit out of someone just for looking at him the wrong way sometimes.

“Something like that,” he muttered around the cancer stick. Thick smoke hit the air, and Axe looked down at the floor.

“Look, there’s nothing wrong with that, brother. No one wants to be caged up like an animal, but you got to have my back. If I say I got this, then I mean
I got this
.” Silas finished the last of his cig, extinguishing the butt under the sole of his black leather shitkicker. “I. Got. This.”

For a second, he thought Axe might put up a fight. He even cracked his knuckles, easing away from the table for good leverage. But he eventually backed down, shoulders sagging in the chair. Silas sat up, leaning his elbows on his knees while he played with the new cigarette between his teeth.

“All right. I got your back. I won’t talk about jail time again. Just don’t say I never brought it up.”

“Don’t even worry about it, bro.” Silas put out his hand, and Axe slapped their palms together. The two of them got up from their chairs, ready to get to work. Silas quickly walked over to the man and gave him a pat on the back. “We’re golden. Believe me, I get it.”

“Anytime.” Silas felt his phone buzz in his back pocket. He jammed his hand into his jeans, shut off the meeting reminder, and stretched. “That’s my cue.”

“You sure you want to go there alone?”

“Definitely. Tonight’s the easy part. You keep the pussy warmed up for me until I get back.”

“I can’t promise there’ll be anything left, with the night I’m planning to have.”

Silas snorted. “Good luck with that.” He opened up the door and glanced back with the beginning of a grin tipping up the corners of his mouth. “Make sure you wrap that thing up.”

“Nah, but if you’re planning that kind of crazy night, I’ll pass on the second-hand pussy for now.”

On his way outside, he dodged a couple more twisted claws on the way to his bike. Shoving his hand into his back pocket again, he pulled out the phone to double check the address and directions. His calm response to Axe about tonight’s meeting was all an act, but no way was he letting on that this new client was a bit trickier than normal.

Even
he
knew that was bullshit.