Read Pages for You Online 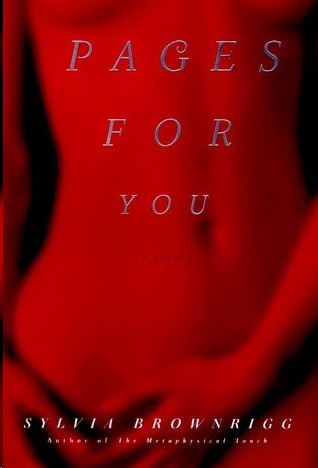 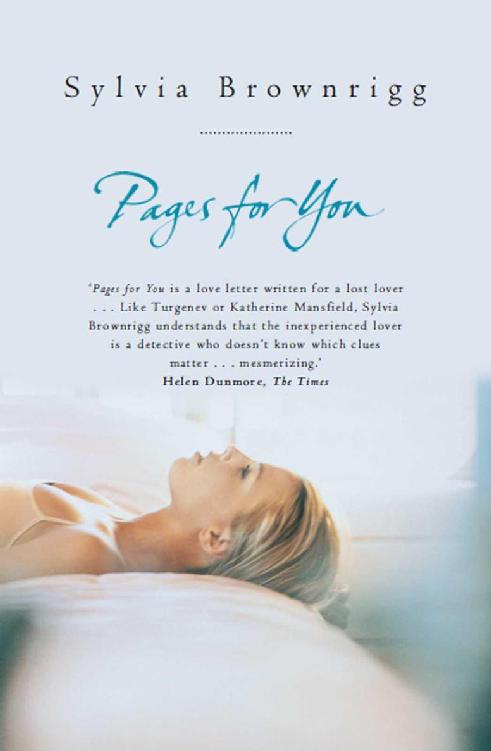 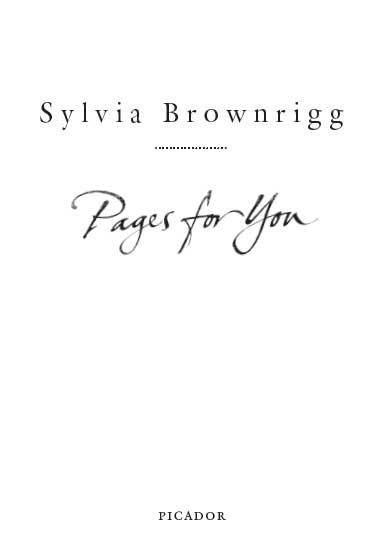 W
hat would happen if I wrote some pages for you? Each day a page, to show you that I am finding a story, the story of how we might have been together, once. Of how we could be.

We will never be together.
Sweetheart.
I am too brittle, hidden, and snappish, and you are too married. You are altogether too married. For those of us who’ve never known the state it sails past us like a cruise ship, lamps all on and parties raging, as the water gently or rockily allows you to sweep across it. We wave from our smug or perhaps lonely shores, waiting till the sea-scattered brightness has withdrawn its silvery music, and we’re left alone in the dark, on dry land, to carry on with our unfettered midnight explorations.

He’s a lovely man, your Jasper, not that I know him. I know of his qualities by how he illuminates you—you can see the light of him all through your body and most particularly your face as you tell tales of your joint adventures: clifftops and forest walks and long, cool, medieval alleys. Forget-me-not seas and the heart-pure beaches beside them, along which you can both sun-stretch silently or speak. Galleries and night strolls, concerts and banquets. Language and travel, and the many ways those twain shall meet. So alive are these narratives on your wantable mouth and in your essential eyes that I can watch them, movies in my quiet head to play when I’m at home, stirring in my empty rooms, waiting for my own ship to come in.

It will come. They’ll find room for me somewhere. Someone will cough up an extra berth on some deck or another, or there will be a lucky last-minute cancellation. Who knows, maybe I’ll even be given a seat at the captain’s table to mingle with all the uniformed fellows and their glorifying wives. No—not the captain’s table for me, probably. Probably something more like Table Thirteen, with the insurance agents and medical eccentrics, where I can be fêted as a storyteller—
Really! But how wonderful! Tell us, what kinds of stories?—and
be allowed to sip my sparkling water without causing too much trouble. I’ll sit at my table onboard and silently toast you, across the oceans, where you’ll be sparkling at yours.

In the meantime, I have treats in store for you. A perfect, pitch-purple aubergine; caramelized fennel; potatoes roasted in rosemary, for remembrance. Coriandered orzo tossed with chicken and okra. Kiwis and tangerines. Cake moist with all the ginger and butter one girl can politely afford, to create something fragrantly spiced and suggestive, a taste to remind you of a late glass of wine and mood-loosened limbs: that question in the eyes, or the stray touch of one’s hand on another one’s forearm. The never-kissed kiss. The imagination ignited.

Enough. Enough. The taste treats are real, or will be. Now, here are your pages.

T
he leaves were confettied brightly over the sidewalk as if a parade had just passed, and Flannery did not think she had ever in her life seen such colors. They would get deeper and more heartfelt, she knew, with warm oranges and pomegranate reds, and she could hardly wait for the experience. Like every other sensation, that sight was still before her. But already they were goldenrod and butternut on the ground, and up in the trees (she looked skyward) infinite greens, all the apple and lime and melon flesh she could imagine. They were so beautiful she wanted to eat them or breathe them, take them inside her, make them part of herself. At the very least, she wanted to not ever forget them. She told her memory to hold on to them; there might come a time later when she would need their solace.

She came from a place where autumn meant oncoming dampness and fog, the new drawl of the school year: a plain, dull gravity of shoulders and hope. Nothing like this fierceness of light and the brisk bite of cold on the cheek, which seemed playful, a love nip, rather than a somber slap of warning that winter might come. She was not yet wary of the winters here, having not moved through one. She knew this approaching splendor meant death and decay, the boding of ice-prisoned branches and slippery black streets, but could not make herself feel the grief in it. All this vividness she could read only as exhilaration. Not melancholy.

Flannery abandoned herself to movie clichés of the East she’d learned as a girl in the West. She kicked her tennis-shoed feet through the leaves. She buried her hands in the pockets of her coat, which had a serious weight she was not used to. She knew that this lift of fall glory, which brought her to a shocking peak of happiness—from where, suddenly, she had a complete panoramic view; could see the shape of her future, the blank scope of her forthcoming cities and days—she knew that she would never again reach such a height of pure, sensual pleasure. Never again in her life.

She was seventeen. She had no idea about anything, really. And she was about to meet someone—literally, around the next corner.

Within that person, a new and altogether unsuspected happiness waited.

A
round the corner was a diner.
Diner:
even the words were new here, as if she were in another country, which every single minute she felt herself to be. She had grown up with coffee shops, not diners. She had eaten not grinders but subs. She’d never considered, not for a moment, the idea of a jelly omelette.

This diner was called the Yankee Doodle, a cheerful name that belied the cramped gloom of the place. The Yankee Doodle had jelly omelettes on the menu, and Flannery was feeling bold as she sat down. Sure, she could have a toasted bran, corn, or blueberry muffin—it hardly mattered which, they were essentially the same, and she could in anticipation taste the crisp buttered edge of each neat disk—but with the gold splendor still in her spirit from the leaves, she said to the prune-faced waitress who waited, wiry with impatience and sarcastic with accent,

“A jelly omelette, please. And a glass of orange juice.” The waitress nodded, scribbled on her pad, and retreated behind the narrow Formica counter, along which a few jacketed shapes huddled over hot drinks and doughnuts, or hash browns mixed with ketchup-bloodied eggs. To a stooped, white-shirted man whose balding head was all but lost to steam clouds of grease, the waitress instructed with unneeded volume,

The phrase, ridiculous when spoken, especially so loudly in the bored voice of the waitress, had a single advantage. It caught the attention of a figure sitting at a table in a near corner, from whom Flannery might otherwise have hidden as she sank back into her familiar state of wrong-footed self-consciousness.

Dressed in black, drinking coffee, smoking a cigarette. Absorbed in a book—until, that is, “Jelly omelette!” broke the concentration. In one of those gifted premonitions, Flannery noticed the reader an instant before “Jelly omelette!” was barked, so that she was directly facing the elegant autumn-shaded head and already wondering keenly what the book might be.

The green eyes looked up in an irritated humor, to see who could possibly be the author of such an order.

Flannery saw the reader’s eyes, her cat green eyes, and stopped breathing. Never in her life—not at least since the leaves—had she seen such a heartbreaking color.

T
o that green glitter of mockery—Flannery’s breakfast request was, from an adult, hardly credible—the hungry girl replied with a smile of embarrassment, an apologetic shrug of the shoulders.
I can’t help it
, Flannery tried to suggest.
I don’t know what I’m doing.
There was no smile in return. The reader’s glance-flicker was so brief that Flannery’s shoulders were still winced up in their shrug when those eyes turned back to their pages and the serious lips took a deep drag from a cigarette.

Oh. God. Those lips. It was the cigarette that made Flannery notice them, now that the reader’s eyes were turned down toward her book. Flannery had nothing to do but watch that mouth smoking, and though she couldn’t have said why it was so beautiful or described the thrill of its shape—she was too young to have anything like a vocabulary for such things—she could not stop herself from watching it, shaded a darkish persimmon that left its trace on the cigarette. But the ash was low, Flannery saw, and soon the fine, purposeful fingers were stubbing it out. Flannery looked away quickly, panicked, frightened of further emerald mockery if she was caught staring so unashamedly.

The waitress brought her her orange juice, and Flannery took a great swallow as if it were a shot of vodka. It was fakely sweet and an unlikely color, more like a billboard or paint shade than any real fruit. Its strange flavor made her mouth pucker, and she was relieved that the waitress was soon back with a different taste to replace it: a lightly browned yellow omelette, thrown gracelessly onto a thick white oval plate.

Flannery stared down at it a moment. What had she asked for? What was a jelly omelette, actually? With the side of her fork she tentatively cut into it, a clean slice off the edge. Out of the cut leaked a thick translucent purple, as if she’d hit some alien vein. The purple was, she realized, none other than grape jelly. The purple and yellow textures avoided each other uneasily on the plate. They were not meant for each other: being together did not suit them. Flannery put down her fork and sipped her juice, for courage.

Something made her risk a look at the reader, and she was sure that she saw a telltale dip of the head, as if the woman had just been watching
her.
Emboldened by the idea, Flannery kept her gaze on the now nonsmoking figure, who took a sip of black coffee. And another. She turned the page. She pursed her lips. (Those lips!) She brushed a lick of deep reddish brown hair behind a delicate ear. She sipped her coffee. Her eyes moved to the next page. Flannery abandoned her omelette and watched the woman drink her coffee. Still, she wanted to know: What was the book?

One Dead Lawyer by Tony Lindsay
Rissa and Tregare by F. M. Busby
El psicoanálisis ¡vaya timo! by Ascensión Fumero Carlos Santamaría
Echoes of Avalon (Tales of Avalon Book 1) by Adam Copeland
The Empire of Gut and Bone by M. T. Anderson
Many Worlds in One: The Search for Other Universes by Vilenkin, Alex
Werewolf Breeding Frenzy by Sabine Winters
Mountain Wood by Valerie J Aurora
Snatchers: Volume Two (The Zombie Apocalypse Series Box Set--Books 4-6) by Shaun Whittington
The Cabinet of Wonders: The Kronos Chronicles: Book I by Marie Rutkoski