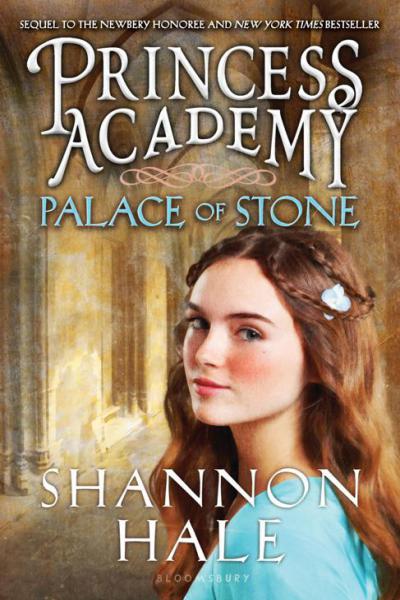 A princess in her own right

The rock-lined road is the way to work

The rock-lined road takes the work away

The rock-lined road is the way to take

Take you there and take you home, there’s nothing but the rocky road

Miri woke to the insistent bleat of a goat. She squeaked open one eye. Pale yellow sky slipped through the cracks in the shutters. It was day—the very day trade wagons might come to carry her off. She’d been expecting them all week with both a skipping heart and a falling stomach. Strange, lately, how many things made her feel two opposite ways twisted together.

Miri crept from her pea-shuck mattress to the window. A figure stood in the doorway of Peder’s house. She waved, Peder waved back, and those addled feelings popped inside, her chest light and excited, her head tight and unsure.

She felt two ways about home too, she realized, looking out at the few dozen houses of Mount Eskel, their roofs traced white with dawn light. Her mountain was big. The world was bigger.

A noise called her back. Her sister, Marda, was sitting up, and her pa too, stretching and groaning from the ache of sleep. For them she felt only one way. And for them she never wanted to leave.

“Peder’s grandpa says he’s seen more bees this fall than he can ever remember, and that means the winter won’t be too hard, but if it freezes and thaws all the time you’ll have ice everywhere, so I think we should dump more gravel on the path to the stream—”

“We’ll be all right, Miri.” A goat pushed against Marda’s side, and Marda rubbed its ears. “You don’t need to worry.”

Pa was walking ahead of his girls. His back tensed against Marda’s words.

“Pa …,” Miri said. She wanted him to say that he would be all right without her.

They reached the quarry, a huge bowl of white stone, rectangles of rock jutting at odd angles. Already dozens of villagers were squaring blocks of linder stone they’d cut from the mountain and were hauling them out of the quarry. The nearest group worked one stone together, singing to keep in rhythm:
“Take you there and take you home, there’s nothing but the rocky road.”

Pa halted at the edge. “Expect us for lunch, Miri, so long as …”

Miri finished his thought.
So long as the wagons have not come.

Pa hefted his pickax and strode into the pit. Marda followed, turning to shrug at Miri. Miri shrugged back. They both knew their father’s temperament.

Miri tied her goats on a slope where they could graze, then skipped back down to the house. She picked up a letter from the table, as she had each morning since it arrived with the traders in the summer. The letter still seemed as magical as books had when she’d first learned to read.

She had the letter memorized, but she read it again anyway. It was from Katar, who had left Mount Eskel for the capital several months before.

This is a letter. A letter is like talking to someone who is far away. Do not show the others in case I am doing it wrong.

This fall, extra wagons will go with the traders to bring to Asland any academy graduates who are willing. You are invited to stay one year. I know you, at least, will come. It is a long trip. Bring a blanket to sit on in the wagon or you will get a bruised backside.

At harvest, each province in Danland presents a gift to the king. As this is the first year Mount Eskel is a province, I want our gift to be really fine. I cannot think what we can offer besides linder. I do not think goats would be quite right. Please tell the village council that the linder must be special, perhaps a very large block of it. I do not sleep well with worry. I grow tired of the mocking way the other delegates speak of Mount Eskel.

I am anxious for you to come. There are things happening in Asland. I need advice, but it would be
dangerous for me to write about it, I think. I hope it will not be too late by the time you arrive.

This letter is from Katar, Mount Eskel’s delegate to the royal court in Asland

Miri put the letter back on the table, held down by a shard of linder—white stone struck through with veins of silver. She could not guess what dangerous matters Katar wanted to discuss with her, but that had not kept her from trying to imagine all summer long. And summer had seemed very long indeed.

Miri picked up a second letter and could not help smiling as she read Britta’s looping handwriting.

I am delighted to write to you! Though I would rather talk to you in person and sit as we used to do in the shade of the princess academy, watching hawks glide. At least I have good news to share. The king has invited the academy girls to come this autumn! Autumn is not near enough for impatient me, but it is closer than next spring.

I will brag just a little and claim credit. I made a very pretty argument that the mountain pass might still be stopped with snow in the spring and prevent you from
arriving in time for the wedding. And how could the princess be married without the princess’s ladies?

You girls will room here at the palace. Palace seamstresses will make you dresses in the Aslandian style, so please do not fear on that account.

Also, I have wonderful news! There is an open spot for you at the Queen’s Castle, the university I told you about. Studies begin after harvest, so you see, another reason I am eager to have you here before spring.

More good news. A stone carver my father used to hire has agreed to take Peder into apprenticeship. Gus will house and feed Peder in exchange for a year’s labor and one block of linder.

There will be so much for us to do here. I can scarcely sleep sometimes for daydreaming! Let the summer fly on hot, swift wings.

Traders came up to Mount Eskel only once each spring, summer, and fall, so Miri had been unable to reply to either girl. She had no doubt Katar was going crazy with worry about their gift for the king. Miri could not wait to surprise her.

Miri ladled morning gruel into a pot and headed out the door. Peder had spent the past three months sweating over the gift. And since his family was short one quarry worker while he labored, the other village families supported Peder with meals. Today was Miri’s turn. While her pa and sister worked in the quarry, Miri kept the house and goats.

She ambled over the rock chippings that covered the ground to Peder’s house, knocking once and letting herself in.

“Good morning, Peder,” she began, stopping when she saw Peder’s father, Jons, standing with arms folded. The mood in the cottage had the bite of winter wind.

Peder slumped onto a stool. “My father is reconsidering letting me go to Asland.”

“Not reconsidering,” Jons said. “Decided. You’ve already wasted three months carving this thing. Since your sister is leaving us, you’ll be staying.”

For Peder, quarry work was mindless, endless. He’d been carving bits of linder into animals and people for years, yearning for a chance to do it more. Miri wanted to plead with Jons but checked herself, remembering the rules of Diplomacy she had learned at the princess academy.

“I can understand, sir, why you want Peder to stay. He hasn’t worked in the quarry since the summer traders came. Besides, it would be hard on your family to lose both children for a year.”

“I would agree, but in this case, sending Peder to Asland will be much more useful for your family
and
the village in the long run. As it is now, after the traders haul our stone down the mountain, artisans in Asland chip away half of it to make mantelpieces and tiles and such, and they earn a good living doing it.”

“Exactly!” Peder said, standing up. “Why shouldn’t we do that work here, ourselves? After I’m trained, traders could bring me orders in the fall, then I’d work through the winter and send the carvings down in spring.”

“I know Peder will be diligent in his apprenticeship and do you proud. Will you let him go?”

She held her breath. She could not hear Peder breathe. Jons turned to look out the window.

“Fine,” Jons said with a grunt. He paused to lay his hand on Peder’s head before leaving.

He took a step back and smiled as if he truly loved looking at her face. Then he started in on the breakfast.

Why doesn’t he ask?
The thought was so well used it squeaked in Miri’s mind like dry hinges. She was of age to be betrothed. Peder seemed to like her and no one else. Yet he did not ask.

Afraid to look at him in case he could read her thoughts in her eyes, she leaned over the mantelpiece he’d been carving. She traced the images of Mount Eskel and the chain of mountains beyond, beautifully captured in linder.