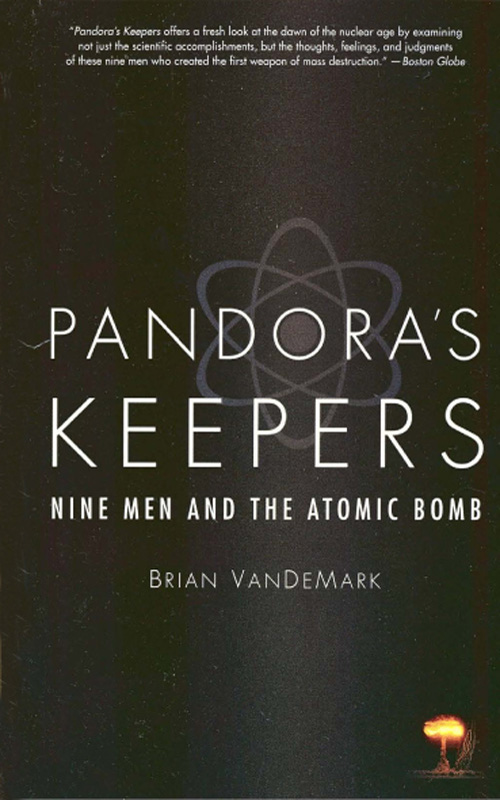 IN RETROSPECT (with Robert McNamara)

All rights reserved. No part of this book may be reproduced
in any form or by any electronic or mechanical means,
including
information storage and retrieval systems, without permission
in writing from the publisher, except by a reviewer
who may
quote brief passages in a review.

PROLOGUE
: Nine Physicists and the Discovery of Fission

PART I: A FEARSOME GRAIL

CHAPTER
6: The Decision to Use the Bomb

CHAPTER
8: An End, a Beginning

EPILOGUE
: The Atomic Scientists and Today

This is the story of nine men who helped create the atomic bomb, which forever changed their lives and the world. Their story
is a compelling one, filled with elements of great drama, emotion, irony, and tragedy. It is not surprising, therefore, that
the story of the bomb’s creation has been told often, and well, by others much more knowledgeable about nuclear physics than
I.
1
My aim is different. It is to explore the
human
story behind the atomic bomb by probing its creators’ thoughts, feelings, and judgments. What motivated them? How did they
relate to one another? How did they deal with the political and moral issues posed by nuclear weapons? Put simply: Why did
they do it, and what did it mean to them?

People usually think about what the atomic scientists did, instead of who they were, because they do not see them as human
beings with personal histories and emotional lives, hearts—sometimes broken—as well as heads. Scientists themselves have contributed
to this popular image. Very often they have represented themselves as calmly rational and coldly objective—above human frailty
and unaware of man’s condition. But scientists are first and foremost people, people who know just how imaginative and human
an enterprise science really is.

All of this suggests that the history the atomic scientists made is not as simple as people have usually portrayed it. Numerous
myths and caricatures have grown up around the atomic scientists (and the bomb) since 1945. Too often these men (and they
were almost all men) have been flat screens on which one-dimensional fictions and fantasies were projected. But the atomic
scientists were not all good; they were not all bad. To understand them is to recognize their good intentions and at the same
time to confront the doubtful morality of their achievement. Good history does not fear ambiguity, nor does it reduce complex
and sometimes contradictory individuals to simple stereotypes.

Physics, like everything that is potentially constructive, can be put to destructive ends. It has two faces, benign and threatening,
bringing blessings and curses. Each of the atomic scientists, like each of us, can make imperfect choices that seem reasonable—even
responsible—in the context of the times but are impossible to undo once the course is set. They, like us, do things they think
are right at the time, and later come to regret them. They, like us, have rich human stories of ambition and disappointment,
achievement and failure, cooperation and rivalry, jealousy and revenge. Their story helps illuminate how people deal with
circumstances, the legacy of creation, and an imperfect world that sometimes forges good from evil and evil from good. Their
story has moral reverberation, that strange and haunting quality generated by a tale that is not always pleasant but that
entrances us because it has an effect beyond itself. This effect may be as simple as inspiring us to do something practical
about the legacy of their creation, or at least to feel that we should.

Many physicists contributed to the making of the atomic bomb. Clearly, not all of them can be treated, not even in a big book
like this one. I therefore used three criteria to select the subjects of this study: 1. those who contributed centrally to
the bomb’s creation; 2. those who voiced moral and political judgments about the bomb; and 3. those whose views represented
a range of opinions and responses. Based on these criteria, I chose to write about the following nine physicists, in alphabetical
order:

This book treats these nine physicists as a group rather than as discrete subjects. It seeks to integrate what might otherwise
be a string of disparate biographies into something like a history of a scientific generation, and to do so without slighting
either the individual physicist or the larger setting. It follows their intertwined lives chronologically, showing how they
related to one another and reacted to the history they made together. Part I traces the atomic scientists’ effort to build
the bomb and, with it, to end World War II. Part II explores how the atomic scientists came to understand the bomb’s consequences,
both for their own lives and for the world they changed forever through their creation.

Two themes—two morals of the story—emerge along the way. The first is how inexorable was the trap into which the atomic scientists
fell, a trap largely of their own making. The atomic scientists were deeply thoughtful men, no fools in any way, yet they
were drawn into a frenzy of creation, throwing themselves into the enterprise and laboring beyond all expectations of human
capacity to produce a weapon of unprecedented destructiveness. The effort quickly took on a life, and a momentum, of its own,
a chain reaction from a chain reaction. When it was done, the bomb they had made horrified and frightened them. The atomic
scientists originally sought to build something that would save the world and ended up believing what they created might destroy
it. They came to fear the very thing they had built to end fear.

The second theme is the political and moral awakening of the atomic scientists. Twentieth-century physics was a great adventure
of imagination and intelligence, and until the discovery of fission it was carried on in an ivory tower, far removed from
the world of politics. It was “pure” science—a contest of the human mind with nature; the object was not to change the world
but to understand it. Scientists did physics because it was there to be done and because it was wonderfully interesting. They
rarely addressed the political implications of their research or applied moral considerations to their work. They were detached
and above such things. But their work on the bomb shook the atomic scientists out of their detachment and forced them to confront
larger implications. For the first time, they began to ask questions about politics and morality in the same searching way
they had always asked them about Nature. And as they asked these questions, they transformed themselves.

The atomic scientists’ struggle to come to terms with what they had done is emblematic of the larger and continuing human
struggle created by the opening of the Pandora’s box of nuclear weapons. Some of the questions the atomic scientists wrestled
with, we are still wrestling with now. Today, as we rush headlong into a future filled with the promise of potentially astonishing
scientific and technological advances, we are continually drawn back to the most momentous scientific achievement of the twentieth
century—an achievement that raises questions so profound that they seem to transcend time itself.

Nine Physicists and the
Discovery of Fission

H
E FIRST LEARNED
the news in late January 1939, just seven months before World War II began. Eugene Wigner, a fellow Hungarian physicist whom
he had known since their student days together at the University of Berlin, lay ill in the Princeton University infirmary
with jaundice. Although weak, Wigner instantly recognized the short, portly man with curly dark hair, enormous head, flat
cheekbones, and gentle, soulful eyes when he walked into the infirmary room. It was Leo Szilard. Szilard had come out of friendship,
but business was still permissible, indeed necessary, since Wigner had urgent news: a chemist working at Berlin’s Kaiser Wilhelm
Institute, Otto Hahn, had split uranium the month before.

Szilard, shocked, wanted details. What Hahn had done, repeating an experiment first conducted by the Italian physicist Enrico
Fermi in 1934, was to bombard uranium atoms with neutrons (particles with no charge that could pass through the electrical
barrier surrounding the atom). Nuclear physics was still in its infancy, and measurements were done by methods that were often
crude and amorphous. Fermi had surmised that the uranium atoms had absorbed the neutrons and, in the process, had been transformed
into heavier, man-made “transuranic” elements. German chemist Ida Noddack, following reports of Fermi’s experiment in scientific
journals, had suggested a chemical analysis of “transuranic” elements to see if they were actually fragments of split atoms.
But Fermi had not pursued Noddack’s suggestion, because he did not think a slow neutron with very little energy could split
the massive uranium nucleus. Had he thought so, he might have discovered fission five years earlier.