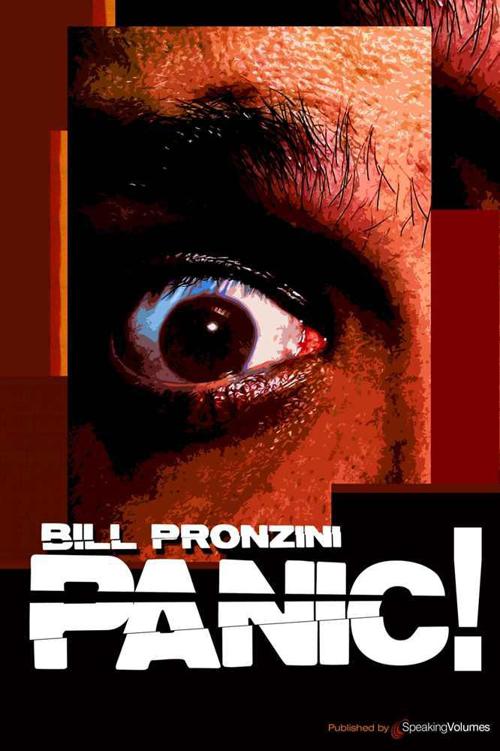 Other Books by Bill Pronzini

All rights reserved. No part of this book may be reproduced or transmitted in any form or by any means without written permission of the author.

For Barry N. Malzberg
—
gifted
,
gloomy,
Exasperating, and above all, a friend

What is the use of running,
When you are on the wrong road?

The First Day...
One

The desert surrounded the moving bus like an earthly vision of hell.

Heat shimmered in liquid waves on the polished black ribbon of the highway, in thick tendrils across the arid wastes extending eastward to the horizon, westward to a low stretch of reddish foothills. The noonday sun, in a charred cobalt sky, was a fiery yellow-orange ball suspended on glowing wires. Nothing moved beyond the dust-streaked windows except the heat; the only sign of life was a carrion bird, a black speck lying motionless above something dead or dying in the far distance.

Inside the bus, the air had the same furnacelike quality, smelling of dust, of sweat and cracked leather, of urine from the faulty toilet facility in the rear. It was not crowded. There were only five people riding in addition to the driver: two silent old ladies, with skin that had been dried and cured by twenty thousand appearances of the desert sun outside; a fat man, sleeping, snoring softly; a young, homely girl who sat with her legs splayed wide because the heat had chafed her inner thighs painfully; and, well in the rear on the driver’s side, a lean, hollow-eyed man sitting slouched against the window, breathing through his mouth, thinking about nothing at all.

The hollow-eyed man’s name was Jack Lennox, and he had long, shaggy black hair that hung lifelessly over a high, ascetic forehead, curled around large flat ears, partially draped the collar of a shapeless, sweat-stained blue shirt that had cost twelve dollars new two years before. There were deep, shadowed furrows etched into the once smoothly symmetrical planes of his face, a dissipated sheen to the once affluent healthiness of light olive skin. His eyes, sunken beneath thick, straight brows, were like green Christmas bulbs long burned-out, the whites tinged with a yellow that gave them a sour-buttermilk quality. He was thirty-three years of age, and he was an old, old man.

As he sat staring at the barren wasteland rushing past outside, he reached in an automatic gesture to the pocket of his shirt, fumbled, touched only the thin material and nothing more. He had smoked his last cigarette two hours before. He lowered his thin-fingered hands, untrimmed nails like black half-moons, and rubbed the slickness of them back and forth across the coarse material of his corduroy trousers; then, slowly, without turning his head from the window, he brought the hands up and dry-washed his face, palms grating lightly over the four-day growth of beard stubble there.

I wonder what time it is, he thought then. I wonder what day it is. I wonder where we are. But none of those things really mattered to him, and the questioning thoughts were rhetorical thoughts, requiring no answers. He stopped thinking again.

Outside, in the wavering distance, a second black ribbon had appeared, winding away from the main interstate highway through outcroppings of lava rock, dry washes, rocky and irregular land surface grown heavily with creosote bush and mesquite, porcupine prickly pear and ocotillo, giant saguaro cactus like lonely, entreating soldiers on a mystical battlefield. A moment later he could see the intersection between the county road and the main highway. A large post-supported sign stood there, with a reflectored arrow pointing eastward; below that:

They passed the sign, and the desert lay unbroken again, as ageless as time, as enigmatic as the Sphinx. Lennox turned from the window then and leaned forward slightly, clasping his hands tightly together in an attitude of imploring prayer and pressing the knot they formed up under his wishbone. The pain which had again begun there was alternately dull and acute, and he rocked faintly against the rigid coupling of his fingers, squeezing his eyes shut, waiting for the agony to ebb and subside. He knew it would be that way because he had experienced deep hunger on several occasions in the past nine months, and the pain came and went in approximately the same way each time. It had been almost two days now since he had last eaten anything of substance, fifteen hours since the three chocolate bars he had bought with his last quarter in the bus station, the bus station where he had gone to use the toilet, the bus station in—what town? what difference?—the bus station where he had gotten the ticket ...

He did not want to think about getting the ticket.

Jesus God, he did not want to think about that, but the old man—he could see the old man vividly in his mind—the old man standing there by the urinal, poor old man with a cane, zipping up his fly with gnarled and arthritic fingers, and the rectangle of pasteboard falling out of his baggy pocket and onto the floor, the old man not seeing it, moving away—and he himself moving forward, picking up the rectangle, one-way a long way and he wanted to move again, he wanted to get out of that town, get away from the Polack and the things the Polack had made him do, things like grinding stale bread and adding it to the raw hamburger to make it last longer, things like scraping the remains on the plates of recently departed customers back into the serving pots, things that nauseated and disgusted him.

And then the old man coming back, looking chagrined, looking lost, cane tapping on the tile floor, tapping, tapping, and seeing Lennox there with the ticket in his own trousers now, hidden in there.

“I got to go to my daughter, I got to have that ticket,” the old man said. “She sent me the money, I don’t have any money of my own. How can I get to my daughter now?”

“What about my ticket? What about my daughter?” pleading with him, eyes blinking silver tears, and he had walked away fast, leaving the old man there, standing there alone and leaning on his cane with the tears in his eyes and the lost’ look on his seamed old face, hurried out of there with the ticket burning in his pocket ...

The pain went away.

It receded, faded into calm, and Lennox was able to sit up again. He rubbed oily sweat from his face, blanking his mind once more, shutting out the image of the old man, and leaned back in the seat; he sucked breath between yellow-filmed teeth, and the fetid and stagnant air burned like sulphur in his lungs.

The Fated Swords (Mystics of V'nairia #1) by J.C.Ritchie
High-heeled Wonder (A Killer Style Novel) (Entangled Ignite) by Flynn, Avery
Future Indefinite by Dave Duncan
Take One With You by Oak Anderson
The Missing Will by Wanda E. Brunstetter
Desire's Golden Dreams by Tish Domenick
Perfect Collision by Lina Andersson
Super Awkward by Beth Garrod
atta girl: Tales from a Life in the Trenches of Show Business by Peggy Pope
Too Many Clients by Stout, Rex