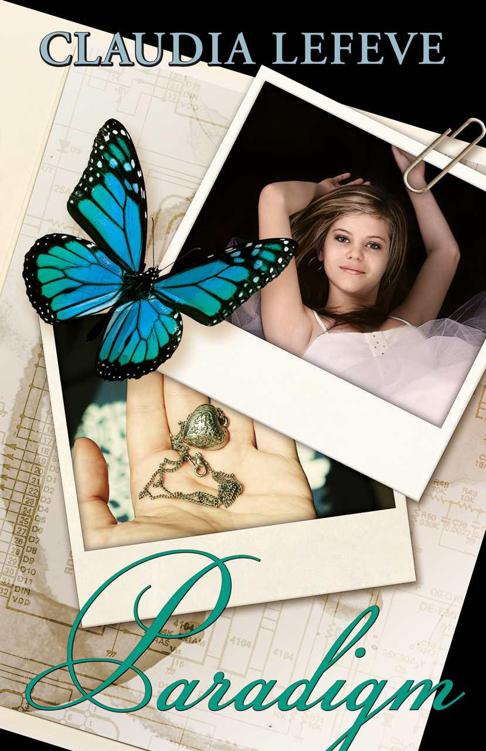 Chapter One: The Wilder Bunch

Chapter Four: Take Me Back in Time

Chapter Six: The Jewel of Denial

Chapter Eight: Back to the Past

Chapter Nine: While You Weren’t Sleeping

Chapter Twenty-Three: This Reality Bites Too

Chapter Twenty-Four: The Kids Are Not Alright

PARADIGM is a work of fiction. Names, characters, businesses, organizations, places, and events are either the products of the author’s imagination or are used fictitiously. Any resemblance to actual persons, living or dead, events, locales, or alternate universes is entirely coincidental.

“Learn from yesterday, live for today, hope for tomorrow.

The important thing is not to stop questioning.”

“D
o you trust me?” Cooper reached across the table, his hand outstretched. “Let’s go somewhere and talk.”

Just at that moment, I saw Jaime rushing up to meet us. “Etta!”

Great. I totally didn’t need another confrontation from Jaime. She would think I purposely came here to meet up with Cooper. She’d never believe me if I told her it was a coincidence and he found me here.

“I’m sorry, Cooper. I just can’t.” At least not at the moment, with Jaime running towards us. Our conversation would have to wait until then.

With confusion and hurt in his eyes, he rose from his seat and walked away without another word. Damn Jaime for bursting in on our moment just now.

“I hope I wasn’t interrupting anything,” Jaime said, taking the seat Cooper had vacated. “He sure took off in a hurry.”

From the look on her face, I know she wasn’t really sorry. What was supposed to be an intimate conversation with Cooper would now turn into a lecture from Jaime. Okay, that was a bit harsh, as I knew Jaime didn’t mean any harm, but I knew catching me sitting here at Battle Grounds with him was going to stir a passive-aggressive reproach from Jaime. It wasn’t like I had planned on meeting him there or anything. But I was sure Jaime would think I had gone behind her back after she warned me about him.

My attention was still focused on Cooper as he fled behind the alley. Leave it to Jaime to ruin another opportunity to talk to him. How did she even know to follow me here? Just when I actually thought I’d get a chance to find out why he was here in town looking for me. I knew he had something important to tell me, the reason he came searching for me, and I wanted to know exactly what that was. I hated how we left things, thanks to Jaime barging in on our conversation, and there was nothing I wanted to do more than go after him. But I was a big fat coward and kept my butt firmly in my chair, facing Jaime instead of Cooper.

“Hmm? Oh, no. It’s fine.” The last thing I needed was Jaime giving me another lecture about strange men, especially Cooper. She’d already said plenty on the matter, and I didn’t need her giving me her opinion again.

A small smile—that didn’t go unnoticed by me—crept up on Jaime’s lips. “Good, cuz he’s trouble, Etta. Look, I’m not trying to burst your bubble. He’s cute and all, but you have no idea what this guy’s story is.”

“Sure,” I mumbled. Was she trying to convince me or herself? Why was she trying so hard to keep me away from him? I took another glance towards at the alley where Cooper had gone behind and then faced my best friend as she tried to convince me for the thousandth time that he was bad news.

“I’m just looking out for you. Remember? Us against the world? It’s just you and me, kiddo.”

“Yeah, I remember,” I said, deflated, not being able to get him out of my mind. Logic and Jaime dictated that I did the right thing, letting him go, but every ounce of my being was telling me I had just made a huge mistake.

And it was too late to run after him. I momentarily let it go, as I was sure he would be back. Though I couldn’t help the nagging feel like he wouldn’t be coming back. Not this time.

Lunch. My favorite period of the day at Alexandria High. It’s almost like an all-human version of the San Diego Zoo: the nerds, the jocks, even the goths, all roaming around in their natural habitat in the cinderblock cage that was also known as the school cafeteria.

I giggled at the thought. Not like I’d ever been an actual zoo, or California for that matter, but I imagined this is what it would look like, as I watched everyone pair up in groups as they picked up their trays and ate their lunch.

“I think you have an admirer,” Jaime said, as she slid her tray on the table, situating herself across from me.

“Who?” I turned my head around to see who she was talking about. No one ever paid attention to us. We were the losers. The parentless. Only a few more weeks until graduation and I could be anyone I want to be. I wasn’t entirely sure of who that was, but I knew I was worthy of being more than just the orphan kid.

“Only the star of the football team, that’s who.” Jaime nodded in the direction behind me. “Take a look.”

My curiosity got the better of me, even though I knew Jaime was only trying to liven things up. Ever since that evening at Battle Grounds, she’d tried everything to distract me from thinking about Cooper, but as I spotted Alex Stewart walking toward our table, I realized instantly who the true object of his affection was, and it certainly wasn’t me.

It was my turn to nod. “Why don’t
you
take a look? Jenny’s right behind you, walking this way. If Alex is staring in our direction, it can only mean he’s gaping at her, not me.”

Sure enough, Jenny Prado, the bane of my existence, brushed right past us and walked straight over to where Alex was waiting by the popular table. She enveloped him in a huge hug, making her cheerleading skirt fly up, exposing her tight red spankies. It was enough for me to lose my appetite.

“Yuck, that’s a scene I’d like to forget,” Jaime said, turning back to her lunch.

“Yeah, don’t we all.” I looked down at my own food and swirled my mystery mashed potatoes, wondering what Alex could ever see in someone like Jenny. Granted, he was part of the popular crowd, but I wondered if deep down he was a nice guy simply misguided by Jenny’s superficial charm. Then again, I’d never really spoken to him before. He could just as well have been a jerk like his gilded girlfriend.

“Why do I feel like we’re in a reboot version of
Sixteen Candles
, where I play pathetic, but lovable Sam Baker and Alex is Jake Ryan?” Jaime asked.

I giggled at the thought of our lives being played out as a movie. “Jake Ryan,” we both swooned in unison, catching the attention of the table next to us. We giggled at our silliness and went back to our own lunches.

“Because life isn’t a John Hughes movie. And even if it were, we’d be cast as one of the social misfits in
The Breakfast Club
,” I point out.

“Yeah, but there was a cute jock in that one. What about
Pretty in Pink
? Molly Ringwald played a girl from the wrong side of the tracks, and she gets the rich guy in the end.”

“True.” But there was only one leading man that even compared to any movie hunk and that was Cooper Everett. Not that there was anything wrong with Alex. Quite the opposite, actually. I would have admitted to having a semi-crush on him, but if I had to compare the two… Oh, who was I kidding? There was no comparison.

He’d spent days trying to get me alone, and I’d secretly waited for him to find me again so we could talk, but it had been days and he’d never come back. Maybe he really was just messing with me, and never had anything important to tell me, or maybe he’d decided to give up on me and go back to wherever it was he’d come from. It was wishful thinking on my part that he’d stick around.

Chapter One
The Wilder Bunch

“M
ake a wish, Etta!” Jaime urges after everyone finishes singing. I remember there was a time when I couldn’t wait to turn eighteen and be free of living the life of an orphan, stuck at Dominion House for Girls. Then, it was the expectation of turning twenty-one, so not only could I vote, but I’d be able to drink, too. And now, here I am, turning twenty-two—not a milestone birthday by any means—so I can only imagine what awaits me in the future.

Just make it a good year,
I wish, as I blow out the candles
.
I make sure to extinguish all the tiny flickering flames to appease the friends that have gathered to celebrate my birthday. On cue, as the last candle goes out, everyone cheers and I feel an arm slip around my waist. I glance to the left of me and smile.

“I hope it comes true, whatever it is you wished for,” Alex whispers in my ear.

I slightly turn to meet Alex’s gaze and smile. While I hope this year mirrors this past year, I couldn’t ask for a better life as I grin back at Alex. I still can’t believe he’s here with me now, celebrating one of my most special days. In high school, he barely knew I existed, but life is always full of surprises and unexpected curve balls, and now we’ve been together for almost a year.

Four years ago, right after graduating from Alexandria High, I decided I wanted to make my way into the world on my own terms, so I chose not to attend college and instead went to work at one of the local law offices here in town. Not that I have lofty aspirations to become a lawyer or anything like that, but when Jaime dragged me to see the lawyer that handled her trust fund, I found myself in a position to start a new career. I started off doing menial chores and data entry—since I lack what my boss deems a quality education—but after a couple of years, Audrey, my boss, decided promote me to paralegal. This was about the time I reconnected with Alex.

It’s amazing how life changes after graduating high school. You develop new interests, you realize the things that were important in your teens aren’t necessarily important in your twenties, and furthermore, your taste in the opposite sex changes; silly things like popularity are no longer a decisive factor when it comes to life or relationships. It’s like the guidebook for teens is thrown out the window, and you’re handed a new manual for adult life.

As for Alex, right after he graduated from George Mason University, armed with a degree in Political Science, he strolled into Audrey’s law office, looking for a summer internship. He’d just been accepted to Georgetown Law and wanted to get ahead of the game by scouting local law firms where he could intern.

Upon A Pale Horse by Russell Blake
Play Dirty by Jessie K
Civilization: The West and the Rest by Niall Ferguson
Nothing Personal: A Novel of Wall Street by Offit, Mike
Dead Warrior by John Myers Myers
Flower Power by Nancy Krulik
Pure Magic (Black Dog Book 3) by Rachel Neumeier
Hello Loved Ones by Tammy Letherer
The Night Stalker by Robert Bryndza
The Art of Life by Carter, Sarah