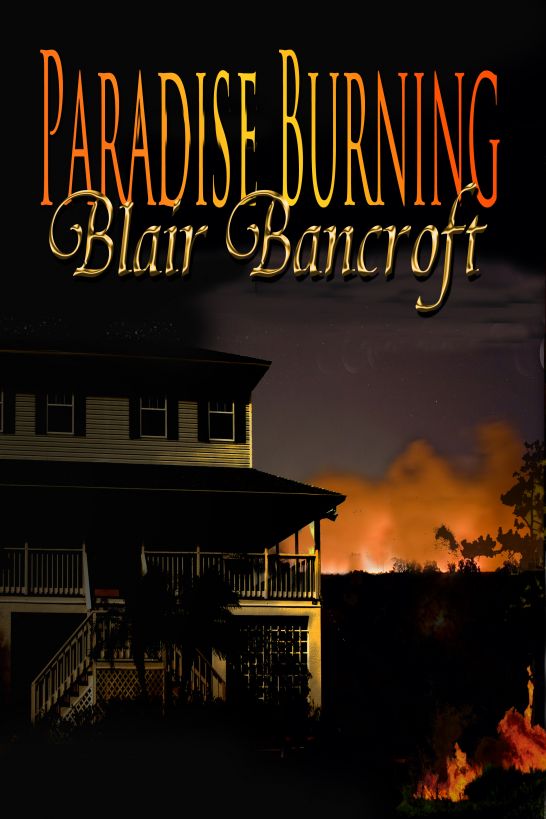 For other books by Blair Bancroft,

“
Almost in.” Kira Malfi’s honey-warm
voice pinged off a satellite, crossing thousands of miles as
clearly as a call to Boston.

To Mandy Armitage, Kira was a reddish blob of
body heat on her computer screen, but in her head she held a clear
picture of AKA’s whipcord-fit agent, poised over a keyboard in a
dilapidated warehouse on the outskirts of Lomé, Togo, her
chocolate-brown skin blending smoothly into the darkness around
her.

Almost in
. A
few more minutes and they’d have what AKA had been after for
months. The culmination of Eleanor’s latest pet project.

At the thought of Eleanor Kingsley, the
autocratic K in AKA, Mandy winced. Eleanor’s intentions were good,
but on the problem of trafficking her views tended toward
obsession. Risks . . . too many risks.

But not on tonight’s assignment. AKA had had
the location under surveillance for a week. At night the warehouse
on the outskirts of town was a dark, deserted shell. No
problem.

Mandy repressed a sudden urge to blurt
out,
Hurry, hurry, hurry
.
Stupid. How many times had she done this, talking an agent in and
out of a building, a city, a country . . .? She was queen of AKA’s
controllers because she could stay cool and steady while her mind
skidded around, or vaulted over, every obstacle that stood in the
way. Kira’s mission was just one more job, one more line on AKA’s
hush-hush list of accomplishments.

A second voice, urgent, barked in
Mandy’s ear.
Not
what she
wanted to hear.

“
Two men at front, two moving toward
the back. Back door now, Kira. Abort, abort, abort!”

“
Got it.” Kira Malfi still sounded as
if she was taking a stroll in the park.

“
No windows, no crates,” Kira intoned.
“Rafters twenty feet up. So where’s Scotty and his damn beam when I
need him?” Mandy heard a faint sigh. “Hell, baby, maybe they just
want to chat—”

A burst from an automatic rifle punctuated
Kira’s words.

Mandy stared at the five red heat
signatures on her screen. Four showed signs of movement. One did
not.
Oh, God
. In AKA’s twenty
years in business they had lost only two agents. Armitage, Kingsley
& Associates weren’t a mini CIA, just a private firm of problem
solvers. On an international scale, maybe, but AKA agents were not
supposed to die. Particularly not on Mandy’s watch.

The rose garden, bleak and frosty in an
overcast Massachusetts January, perfectly matched Mandy Armitage’s
mood. For a short while she’d allowed herself to hope. Until AKA’s
observer reported Kira Malfi’s lifeless body being tossed into the
back of the Land Rover.

Kira. One more female lost to the
ruthlessness of men who made their living selling women and
children into slavery.
Bastards.

Mandy sat slumped on a wooden bench beneath a
rose arbor. Bare gray branches twined around her, above her, the
thorns undisguised by a few brown remnants of summer leaves.
Pulling the glove off her right hand, Mandy touched her index
finger to a thorn. Pressed down. Watched as blood welled up, the
only spot of color in the winter landscape.

Within twenty minutes of what Eleanor
Kingsley had chosen to call “the incident,” a replacement had been
assigned to Mandy’s computer. She’d been debriefed not only by
Eleanor but by Jeffrey Armitage, the A of AKA. Professionals to the
core, they’d done their jobs, but Mandy noticed Eleanor kept her
hands tightly clasped on her desk, very likely to keep them from
shaking. Jeff poured brandy for all three of them.

And now, at last, she’d escaped into the
frozen gardens behind the old stable block that had been converted
into AKA’s version of mission control. The extensive estate, sixty
miles west of Boston, was centered around a sprawling Tudor-style
manor house with guest cottages for employees. The soothing
ambiance of the rolling New England countryside spread its varied
beauty over eight months of the year and was as stark and
unrelentingly gray as the most conservative Puritan could wish
during the other four.

And yet . . . sometimes when it snowed, every
branch, every rooftop, every fence post was capped with white,
turning the landscape into a minimalist design in charcoal and
white, with sun glinting off the sea of snow, accented by dark
green spikes of spruce and cedar. Oh yes, Massachusetts could be
beautiful in winter, but not now.

Today was ugly, ugly, ugly. Even the ice on
the pond beyond the garden was ugly. Who wanted to skate, laugh,
have fun?

Mandy flicked the blood off her finger onto a
lingering patch of snow. Rose Red, Snow White. Innocents venturing
into a hateful world where women and children were sold as casually
as peanuts at the ballpark.

Which is why, when faced with that awful
decision five years ago, she’d chosen AKA. Chosen loyalty to the
family business instead of love. The agents in the field needed
her. All too often one of them was Jeffrey Armitage. Father.
Mentor. Friend.

And once upon a time Peter had been one of
them too.

Mandy considered herself a pragmatist.
She did her job, avoided introspection. But today, doubts crept in.
She loved her work, loved the excitement, the sense of
accomplishment that came with a job well done. The conviction that
what she did
mattered
. Her
Boston Brahmin grandmother might sniff and call AKA nothing more
than glorified private investigators, but the success rate of AKA’s
day-to-day operations was phenomenal—bringing in enough money to
support an international business and indulge Eleanor’s private war
against trafficking as well. Which, Mandy thought sourly, was a bit
like trying to stop a tidal surge. Both demand and supply were
endless, extending to every part of the globe. Quite simply, trying
to stop human trafficking was like attempting to dam Niagra Falls
or empty the Atlantic with a teaspoon.

Yet Kira Malfi had died trying.

Mandy looked out over the garden, the pond,
the distant bulk of a stone-on-stone fence, and saw an endless line
of women and children, of every race, creed, and costume, winding
their way toward the horizon. Crisscrossing the globe, north to
south, east to west. Going, going, gone. Work slaves. Household
slaves. Sex slaves. Some pampered; most worked to death in a few
years time.

Logically, Mandy knew Kira had volunteered
for the Togo assignment, had been willing to risk all for a list of
slave routes through West Central Africa. In reality, AKA was
trying to plug one tiny hole in a dike with more holes than Swiss
cheese.

The cold penetrated Mandy’s heavy duster
coat; her breath frosted in the late afternoon air. As she drew her
glove back on, she stared down at the blood red spot on the patch
of snow.

Oh, she’d be at her computer tomorrow and all
the tomorrows thereafter. She’d attend meetings, research, plot,
and plan. But for the first time—yes, she had to admit it—for the
first time she began to understand why Peter walked away.

“
Amanda, please sit.” Eleanor Kingsley,
CEO of Armitage, Kingsley & Associates, inclined a regal nod
toward a chair that was almost lost before the polished expanse of
her oversized mahogany desk. Eleanor. Perfectly groomed as always,
her blond hair in a French twist from which no tendril dare escape.
Eyebrows precisely plucked, cheeks expertly rouged, lipstick a soft
reddish brown to complement the elegance of her designer-tailored
beige linen suit. The highly intelligent, penetrating gray eyes
Eleanor focused on her daughter might, Mandy thought, be marginally
warmer than usual, but she was certain of only one thing. She was
glad she’d given up all attempts to emulate her mother somewhere
around the age of eleven.

In the three weeks since Kira’s death in
Togo, Mandy had buried herself in work, controlling investigations
ranging from a missing child to insurance fraud, bodyguard duty for
couriers to Buenos Aires and Hong Kong and for an internationally
renowned visiting lecturer at Harvard. She’d supervised security
system analyses for major businesses in Needham, Providence, and
Greenwich. But it wasn’t enough. Not nearly enough. She loved the
ever-changing challenge of her job, yet it had all turned to
dust.

Oh, she’d recover, she knew she would. Just
as people everywhere swallowed their grief at the death of a friend
or loved one, picked up their lives, and endured. But guilt, no
matter how unjustified, lingered, refusing to bow to logic. She had
helped plan Kira’s mission, had personally directed Kira every step
of the way.

“
Amanda.” Eleanor spoke sharply,
obviously not for the first time.

Mandy lifted her head, drew in a breath,
looked her mother in the eye. Eleanor was up to something, no doubt
about it. Very likely she and Jeff had had a private conference and
decided to manipulate their daughter’s life. Again. Never mind she
was twenty-nine years old and the linchpin of AKA operations. Short
of handing in her resignation, she was stuck with whatever
decisions her co-bosses chose to make.

Eleanor tapped a beautifully manicured nail
on the polished surface of her desk, betraying a rare twinge of
nerves. “Amanda, your father and I think a change of pace will do
you good.”

Oh-oh
. When
Eleanor referred to Jeff as “your father,” she was pulling out all
the stops.

“
You work very hard, Mandy. Too hard.
We’ve asked too much of you.” Eleanor’s words were so smooth Mandy
figured she must have practiced them. Either that or she was
reading off some invisible prompter screen. “You haven’t been more
than a mile from your keyboard since your last visit to your
Grandmother Kingsley in Cambridge, and that was six weeks ago.
Except for AKA business, you haven’t been out of New England in,
well, more than a year.”

“
No breaks at all for the last eight
months,” Eleanor continued inexorably. “You’re a genius at your
keyboard, Mandy. But yours is a stressful position, and even the
best and brightest wear thin—”

“
I
hate
vacations. Twenty-four hours and I’m climbing the
walls!”

“
We understand that,” Eleanor replied
with uncharacteristic patience. “Fortunately, you’re also a good
teacher. You’ve done an excellent job training your backups.
Therefore”—Eleanor paused, closed her eyes a moment before forging
on—“therefore your father and I have arranged a temporary
assignment for you in a new location. The change will enlarge your
horizons, give you a fresh outlook–-”