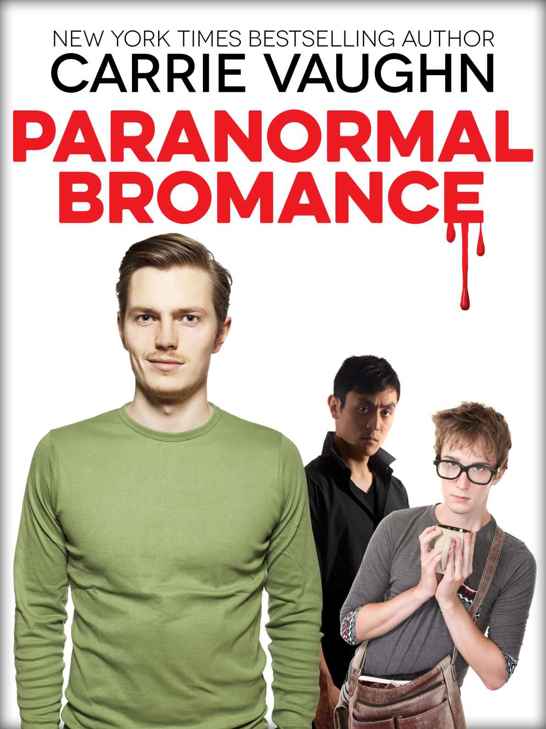 Other Books by Carrie Vaughn

Kitty and the Midnight Hour

Kitty and the Silver Bullet

Kitty and the Dead Man’s Hand

Kitty in the Underworld

After the Golden Age

Dreams of the Golden Age

Straying from the Path

I
WAS HOPING
my roommate Jack would forget that he’d made me promise to go out with him that night. He didn’t. As quickly after sunset as vampirically possible he slammed open the door to my bedroom. “Come on, Sam. Time to go. Up and at ‘em.”

At least he didn’t turn on the light. “Fine. Give me a second to get dressed.”

I washed, put on jeans and a T-shirt, ran a comb through my hair and wandered to the living room.

“What?” The clothes were clean. We had a washer and dryer, and used them. After being turned, I had been terribly disappointed to learn that vampires still had to do laundry, that we didn’t have some supernatural power that kept our clothing ageless and immortal as well.

“This is a
club
, you can’t wear that if you’re going to be convincing as an evil vampire.”

“I don’t have any other clothes and I won’t fit in yours.” I was four inches taller than he was, and not nearly as svelte. Jack was third generation Chinese-American and looked like an actor out of a hyperactive Hong Kong action movie. He dressed like a stereotype, on purpose. Suave silk shirt, unbuttoned at the collar, black trousers, trench coat, and just a little bit of eyeliner to give him a brooding appearance. I had to hand it to him, he really knew how to work it.

By his sigh, I’d have guessed this was the most frustrating thing to happen to Jack all week. “Not even a dress shirt? Do we need to get you some dress shirts?”

“When would I ever need a dress shirt?”

He looked at me bug-eyed, clearly expressing his belief that I was an idiot. “For when you go out to the club, duh.”

Maybe he’d get so annoyed with me he’d leave me home.

“You guys are yelling, stop it.” Aaron, our third roommate, was in his room, the door closed. I was pretty sure becoming a vampire hadn’t changed his lifestyle all that much.

“Here, I can fix this,” Jack said. He went into the hall closet and dug around until he found what he was looking for. “At least wear this.”

He presented me with a black leather jacket. One of mine even, from before I was turned. I couldn’t remember the last time I’d worn it. Nostalgia made me put it on. It still fit, because of course it did—I was the same size I’d been fifteen years ago. I looked myself over. What was it about black leather jackets that made any outfit look just a little bit cooler?

“You’re a shlub. Now let’s go.” He patted my arm and headed for the door.

We walked from our apartment to Psalm 23, a club at the northern edge of downtown Denver. A long walk, but we were strong, and we could move fast when we wanted to.

Saturday night, downtown was busy, crowded. Times like this, I was hyperaware of being a vampire and how it made the world different. I could hear heartbeats, smell the blood of people on the sidewalks with us, even those in the cars passing by with their windows rolled down. I could use these senses to hunt, stalk these people into dark alleys and strike. I didn’t have a heartbeat of my own, but I flushed thinking of theirs. I needed blood. Just a little every day or so, but I needed it. The streetlights and headlights glared, balls of energy in the darkness. I could feel warm summer air passing over my skin, prickling individual hairs. Every sensation was sharp. Even after years I was still getting used to this way of seeing.

“Okay, let’s go over this again,” Jack said. “You make the first move, totally aggressive. Don’t worry, I’ll give you a target. Act like as much of an asshole as you know how. But a vampire asshole, right?”

Everything Jack knew about vampires he learned from
The Lost Boys
. As much as he’d learned about them since, he still clung to some of his old ideas. I’d gone back to watch the movie since being turned. It didn’t age well.

“—and then I swoop in for the rescue.”

We’d done the bad vampire/good vampire act before. I knew how it worked. I kept letting Jack talk me into it because I was, as he observed, a shlub.

“I thought you said you didn’t care. You’re the asshole because you don’t care.”

I didn’t. I kept telling myself I didn’t. This was all just a game. Arguing with Jack was too much effort, so I didn’t.

Psalm 23 was the main vampire club in town. A high-end fancy place straight out of a movie. Some stereotypes are stereotypes for a reason—as it turns out, a great way to go hunting for blood is to open a nightclub, fill it with a bunch of bright and beautiful young things, fill
them
with booze, then seduce the hell out of them. And do it in such a way that they think they’ve had a wonderful evening and always come back for more. It was a place where the city’s vampires could safely and easily feed, watched over by the city’s Master.

Aaron and I preferred delivery. Even as vampires, we didn’t fit into places like this. Neither did Jack, really. He worked so hard at being a tortured, soulful vampire protagonist that he tended to stand out.

The club had been around for a couple of decades, rebranded a couple of times as the neighborhood gentrified around it, but it had always been popular. It had a line behind a velvet rope and bouncer doormen and everything. If we’d been normal mortal humans, no way would we get through that line. But we were vampires, which meant the bouncer had to let us in. We walked straight past all those beautiful people, all of them filled with rich, hot blood. I could understand why Jack kept coming back here.

“Hey, Braun,” Jack said to the bouncer, a black man in a tailored dinner jacket, quarterback-sized rather than linebacker, but still intimidating. He was also a vampire, one of Rick’s own inner-circle henchmen. “How’s it going?”

Why was I nervous that he didn’t even have to think to remember my name? We’d seen each other maybe five times, ever. But it was his job as enforcer and bodyguard to know everyone’s name.

Jack clearly expected him to just open the rope and let us in, but Braun looked us over a good long while. Jack started bouncing a little. I thought he was going to say something when Braun finally let us past, giving us a pronounced frown. I waved a little. The frown got deeper.

As I understood it, there were Masters of other cities who were not as easy going as Rick. They expected some kind of loyalty, some kind of service. They required, you know, dress codes. Me, I figured Rick was nice to us because we were never supposed to be vampires in the first place. We were, in a word, an embarrassment. They cut us a lot of slack because of that.

The place was dark, lit by colored accent effects and recessed lighting, and sleek, lots of gray and chrome and high-backed booths and spindly tables. The music was techno, kind of relentless for my taste. Inside the club, Jack was a predator on the hunt. Literally. He scanned, watched for victims. Pulling us to a ledge by the wall, he leaned up against it and looked causal. To his credit he actually seemed comfortable here, even if he was trying too hard. But me? No other guy here was wearing a T-shirt and leather jacket. Denver had clubs where I would have looked right at home. I should hang out at one of those.

A handful of other vampires were around, and not just the ones who worked here. They blended in, beautiful and sinister, giving us cautious nods across the room—plenty of snacks here for everyone, right? I gave them cheerful waves in return, until Jack elbowed me to stop it.

I would have been happy just sitting back and admiring the scenery—skirts had gotten very short since the last time I paid attention. Short and skin tight. I caught myself wondering if some of these women were even wearing panties under their very short skirts, and if I was standing in just the right place when they sat, would I find out?

Turned out I didn’t have to work all that hard to play asshole vampire.

“There,” Jack said, and nodded. Three women stood by one of the side bars. Not stereotypical clubbers—their skirts weren’t quite short enough and their eyelashes not big enough. Mid-twenties instead of early twenties, out for some kind of celebration. A challenge, in other words. They had drinks, the bartender was somewhere else, and they were isolated.

The Cosmopolitans by Nadia Kalman
Immortally Ever After by Angie Fox
Alexis the Icing on the Cupcake by Coco Simon
A Passionate Girl by Thomas Fleming
The Golden Spider (The Elemental Web Chronicles Book 1) by Anne Renwick
Did You Ever Have A Family by Bill Clegg
Sinderella by Sophie Starr, Tara Brown
A Crime of Manners by Rosemary Stevens
All in Good Time by Maureen Lang
She Who Dares, Wins by Candace Havens