THE HOWL OF THE MISSION OWL 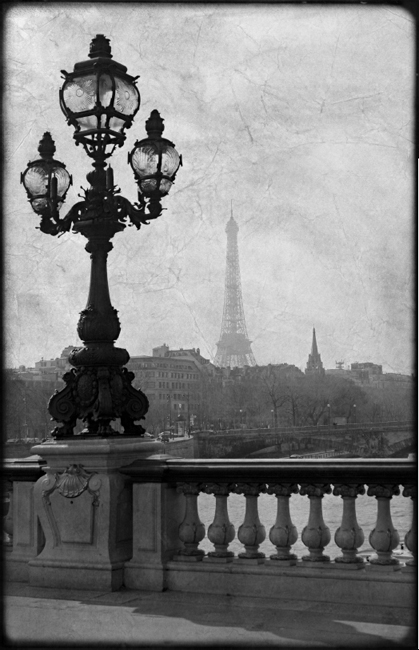 This is a work of historical fiction. Apart from the well-known historical people, events, and locales that figure in the narrative, all names, characters, places, and incidents are the products of the author's imagination or are used fictitiously. Any resemblance to current events or locales, or to living persons, is entirely coincidental.

All other images: iStockphoto

Without limiting the rights under copyright reserved above, no part of this publication may be reproduced, store in or introduced into a retrieval system, or transmitted, in any form or by any means (electronic, mechanical, photocopying, recording, or otherwise), without the prior written permission of both the copyright owner and the above publisher of this book.

The scanning, uploading, and distribution of this book via the Internet or via any other means without the permission of the publisher is illegal and punishable by law. Please purchase only authorized electronic editions and do not participate in or encourage electronic piracy of copyright materials. Your support of the author's rights is appreciated.

In honor of their
first wedding
anniversary 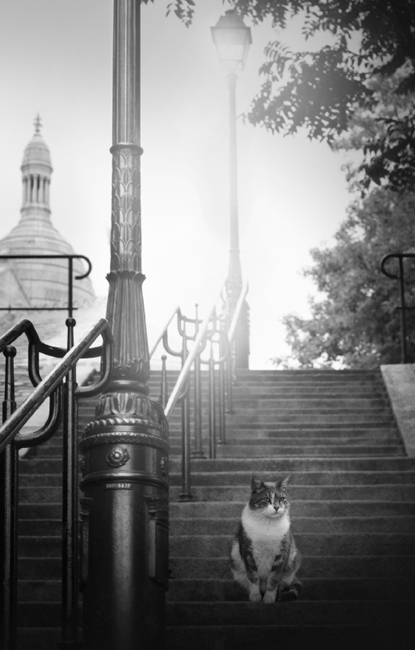 Five Trawling for Babes on the Seine

Eleven: The Insanity of
l'amour

Eighteen: Inside the Cave

Twenty: Madame is in Love

There is only one happiness in life,
to love and to be loved. 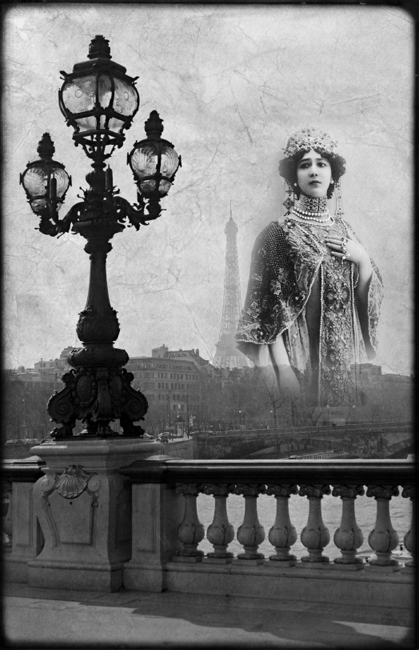 T
heir fervent promises to look out for one another evaporated quickly into the Parisian sky, but Monica and her friends didn't care. It was a glowing fall afternoon in 1973 and, in their youthful effervescence, the four American college students barely noticed when these promises fizzed away. As they strolled, arm-in-arm, down the Avenue des Champs-ÃlysÃ©es, each woman couldn't help thinking about her own dreams, her own ambitions. Monica would never dare reveal her epic-size goals to her friendsââgoals for which she would gladly break their frail chain of promises.

With every step, the pretty young women garnered more and more admiring glances, a remarkable feat in a city renowned for its ubiquitous beauty. They giggled as they listened to each other's rose-tinted visions of Paris, and gasped theatrically at the audacity of how each woman planned to conquer the City of Light. Little did they realize that all eyes on the avenue coveted them thirstilyâsome with lust, others with barely disguised malice.

The Parisians strolling nearby observed the frolicking American students with a world-weary eye. Their French rationality and cosmopolitan experience had ingrained in them a high degree of skepticism about other people in general and, since the student revolt of 1968, university students in particular. The revolt had begun with reasonable-enough student protests against the ban on visitors of the opposite sex in dormitory rooms, but soon escalated to an all-out general strike with over ten million workersââhalf the French labor forceââdemanding societal changes from the French government. Paris had seen many rebellions before, but not on the raucous scale of 1968 ââand this watershed event still whirled the length of the Seine River five years later. So today, on this breezy afternoon, the Parisians walking past could both delight in the Americans' innocent charm and smirk when they thought of the rude awakening in store for naÃ¯ve foreigners like these at the hands of haughty, cynical
real
Parisians.

The coeds glided nonchalantly down the famed avenue, still oblivious to the commotion they were causing. Their tight hip-hugging bell-bottom jeans swayed in the breeze, and their inappropriately skimpy blouses revealed nipples aroused both by the chilly air and by the intoxicating vortex of their own starry-eyed Parisian dreams. Their nubile bodies caught the eyes of a group of well-groomed, tanned young men sitting outdoors at the corner cafÃ©; its red canvas awning, flapping in a gust of wind, applauded the bewitching women with gusto. Had Monica and her friends returned the men's intense gazes, they might have detected the danger.

The young men smoked their cigarettes languorously, tired after a long night of posting political pamphlets on the student kiosks and walls in the Latin Quarterââand from their other illicit nocturnal activities. They'd performed the pamphleteering and political activities with conviction, and without any concern about their source of income. After all, they could do as they wished: their daddies' money from Latin American fortunes would pay for their Parisian indulgences. “Let them sow their wild oats in Paris and not at home where the consequences could cost them their lives,” their fathers had said, imagining their sons' sexual debauchery abroad. But their families had never imagined that their indulged sons would be more motivated by political objectives than erotic adventures. When their sons boarded a ship to travel from South America to France, their fathers sighed in reliefââand they continued to gladly empty their wallets to pay for their sons' whims in faraway Paris.

Monica couldn't help but notice one of the young men, the one who had deliberately fashioned himself in the manner of a dapper Che Guevara. To her gullible eyes, he epitomized the suave French man of her dreams. She nervously stroked her feathered mane, and although his searing stare made her blush, she was spellbound, unconsciously slowing her pace.

“Ssstââ
compaÃ±eros
, they're the ones,” the Che look-alike whispered to his companions.

“
Oui, son perfectas
,” said one of his
compaÃ±eros
, his comrades, in agreement. Among their clandestine crowd, they spoke in a patois of prep-school Frenchââlearned in expensive Swiss schoolsââand rapid Latin American Spanish, with a sprinkling of tropical expletives that were as attractive to female Sorbonne students (particularly those who wanted to show the world they were liberated) as spicy chocolate-and-chili bonbons. The rage among the left-leaning cliques of the Latin Quarter was to be considered part of this group of captivating Latin American students and their French cohorts. Collectively, these suave, slender men personified the zeitgeist of the tumultuous times. Just like the 1968 protestors, they threatened to rattle the foundations of the international socioeconomic status quo.

Many people were certain that these students were going to change the world somehow, and they yearned to be a part of this vanguard. Others in the Latin Quarter, mostly students from bourgeois families, wished they had been old enough to march with the original Che across the hillsides of Cuba, even if only for a few weeks during their summer vacations. But the Che look-alike and his
compaÃ±eros
understood the other students' dilettante desires for exotic intrigue, and, when necessary, they knew how to mix their finishing-school manners (something they knew always impressed the more-formal French) with a little revolutionary pizzazz. In this calculated way, the
compaÃ±eros
coursed as naturally as the Seine River from the most elite
quartiers
of the city to the rowdy Latin Quarter.

“Go.
Vite
. Before they get away,” whispered the clean-cut
compaÃ±ero
.

The Che look-alike jogged up to the women and smiled at Monica. “Bonjour, Mademoiselle. Would you care to join me for refreshments? This table offers a direct view of the Arc de Triomphe. I'd be delighted if you would honor me with your company.”

Monica blushed even more deeply than when she first caught his eye. She wasn't used to courtliness like this this. She'd never encountered it back at her family's horse ranch in rural Murrieta Springs, California, where she and her mother silently bumped into each other in the tack room, hanging up the worn saddles and horse blankets that muffled her mother's cries at the end of a hard day of training. At a moment like this, the contrast between the sadness in her home life and this new world opening up to her in Paris was almost too much to bear. Monica had to clear her throat and dab at her watering eyes, consumed by the memory of her mother's suffering at the hands of her father. She blinked hard, determined not to let this deep bur under her saddle fester in Paris the way it had back at the ranch, destroying her happiness, her youthful optimism. Then one of her friends nudged her, and Monica opened her eyes: they were all smiling and nodding their approval.

As if on cue, the usually aloof waiter snapped to attention, and shot a smile at Monica and her friends. The American coeds interpreted the smile as friendly, but the other
compaÃ±eros
back at their own table exchanged conspiratorial glances with the waiter.

Monica waved goodbye to her friends and joined the Che look-alike at the table for two. At that moment, Paris seemed to glow with warmth, to become the soft-focus sepia postcard she had always envisioned. Neither she nor her friends yet realized that Paris was in fact a city of gray tones, from the architecture with its famed
grisaille
, to the constant drizzle, to its contrasting neighborhoods and
quartiers
of inequality. Each neighborhood was a study in various shades of charcoal, its chiaroscuro nuances revealing the hidden depths of human nature, its malleability and its sometimes-sinister intentions. And at the heart of the Paris
quartiers
, the green-gray Seine River pulsated, its murky waters and shady quais hiding secrets and camouflaging illicit rendezvous.

In fact, Paris was not quite the city captured in Robert Doisneau's dreamlike black-and-white photographs. Doisneau himself admitted: “I don't photograph Parisian life as it is, but life as I would like it to be.” Had another photographer followed Doisneau around the corner of his stylized street settings, he would have captured scenes of melancholy, adversity, and despair.

But for Monica and her friends Lola, Annie, and Karen, Monsieur Doisneau's was the only accurate picture of Paris. They had come from the States to study French, and to cultivate and transform themselves. They were thirsty for the exquisite champagne bubbling from the swankiest quarters of the city. When Monica listened to her friends share their expectations of a year of studying in Paris, she decided thatââunlike the more timid womenââshe was incapable of reining in her own over-exuberant, grandiose goals, any more than she could control her mares in heat back in California.

The women were determined to make Paris into the experience each one had concocted, like a tipsy bartender, for herself. For Lola, Annie, and Karen, Parisian life would start off with a benign cup of coffee a few blocks away, but Monica's Paris experience began when the dashing Che look-alike gallantly pulled the cafÃ© chair out for her and captivated her with his deceitful charm.

Monica's friends were happy for her and her head start on the nonacademic side of their Paris adventure, singled out by a man they assumed to be a handsome, classy French guy. The other three continued their afternoon walk along one of the most famous of avenues in the world, caught up in their own anticipation of
amour
and adventure. Monica, Karen, and Lola had met in their French classes at Cal State. Semester by semester, exhausted by full-time work and full-time study, each one revealed a desire to study in Franceââbut none had the funds to make this a reality. One by one, dollar by dollar, they eventually managed to save enough money to participate in a study abroad program. Once in Paris they met Annie, who generously picked up most of the tab on their joint housing.

Deep in their daydreams, the women didn't notice the shadowy figures skulking at a distance as they walked off down the street. For a split second Lola paused, feeling an infinitesimal gnaw in her gut, and turned back to look at the blushing Monica sitting outside the cafÃ©. Monica's face shone with excitementâso much so that Lola ignored her instinct and hurriedly rejoined Annie and Karen. Not in the deepest, darkest recesses of their minds could the women have foreseen the calamity about to befall Monica, blinded as they were by their promises to make this the best year of their lives.