Parrot in the Pepper Tree 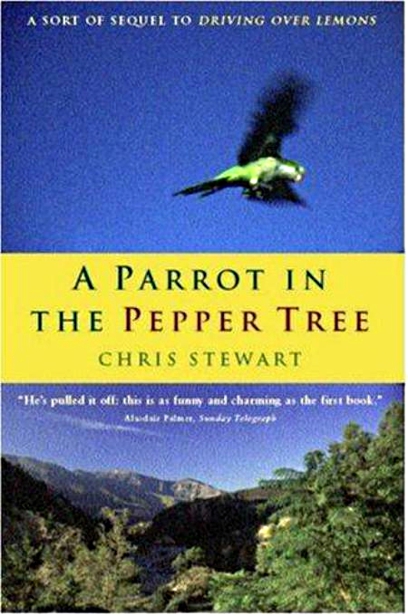 A PARROT IN THE PEPPER TREE

IT WAS LATE AT NIGHT AND FOR SIX LONG HOURS I HAD BEEN DRIVING along an icy tunnel of road into the snowy forest of northern Sweden. I hunched stiffly over the steering wheel to peer along a dismal beam at the monotony of pine trees and snow. One of my headlights had already given up the ghost, snuffed out in a futile struggle against the lashing ice and minus twenty-five degrees cold, and beyond the feeble pallor of its mate and the dim green glow of my dashboard there spread an endless blackness. For more than an hour, now, not a single car had passed me, and not a single lamplight glimmered through the trees. Country Swedes have an appealing tradition of leaving a light burning all night in the window to cheer the passing traveller, but for miles there had been nothing but the deep black of the star-studded sky, and the withering cold. Cocooned in the fuggy warmth of my hired Volvo I had the feeling of being further away from my fellow man than I had ever thought possible.

The radio was little help. The only station I had managed to pick up seemed entirely devoted to accordion and fiddle dances, the sort of low-key jolly fare you might expect at the funeral of a popular dog. I found it a little depressing. Instead, to keep awake, I fell into practising Mandarin Chinese, which for years I had been trying to learn. Counting out loud to yourself,
yi, er, san, si, wu,
is a good way of getting the hang of the tones and it helped me to forget how incredibly lonely I felt. Every time I got to a hundred or so, I would allow my mind to skip back to my home in Spain — the sun on a terrace of orange and lemon trees, Ana, my wife, and I lying on the grass, squinting up through the leaves, while our daughter Chloe hurled sticks for the dog — and then homesickness would strike with an almost physical stab and I’d start again —
yi,
er, san, si, wu…

As I worked my way up into the mid-sixties for a third time, the car engine began to play up. Every few minutes its steady rumble would be racked by an alarming series of coughs and judders, and the car would begin to vibrate, rising to a climax of lunatic shuddering. Then it would calm down again and resume its usual rumble.

Each time this happened I was beset by a vivid image of death by freezing. With the air outside at minus twenty-five degrees it wouldn’t take long. The warmth of the cabin would dissipate in about ten minutes. That would allow me just enough time to grab all the clothes from my bag and put the whole lot on, capped by the enormous canvas and sheepskin coat (twenty quid in the Swedish Army Surplus), big mittens and woolly hat. My body heat would warm up the ensemble from the inside for about half an hour, then, via the usual process of thermodynamic exchange, the immense body of cold air would invade the tiny body of warmth that was me and overwhelm it. Jumping up and down, running on the spot, all that sort of stuff would prolong the sparks of warmth for a little longer, but I had read somewhere that you shouldn’t do too much of it. Just how much was too much, though, I couldn’t quite recall.

Still, as the engine revived once again and the car hummed on, I patted the dashboard affectionately in the hope that this would encourage it to shake off its troubles and drive me all the way to Norrskog, the farming village that I was heading for, still hours away through the forest.

I had picked the car up the evening before from Weekie’s Car Lot, just outside the Copenhagen boat dock. Weekie had looked at me through his thick glasses and a fog of cigarette smoke. ‘Take whichever one you want…,’ he said, ‘…from over there,’ and he pointed with a dismissive gesture to what looked like a scrap yard outside. I stepped out into the bone-chilling cold, the wind whipping across the Öresund shore, and inspected the offerings. There were old wrecks lying morosely here and there, some slumped down over a flat tyre, others with the bonnets off, revealing engines caked with grease and oil and a light covering of snow. This was where cars belonging to respectable, well-to-do folk came to rest, relegated to a twilight spot as transport for those who couldn’t afford a proper hire car. But there was something appealing about Weekie’s. It was like a sanctuary for old unloved horses; for a minimal fee you could take them out for a ride. I chose a pond-green Volvo, paid the small deposit, slung my kit in the back and headed off along the long long roads to northern Sweden.

I was here for a month to make money shearing sheep in the gloom of winter — a job that made enough to keep our small family and farm in Andalucia going for the rest of the year. It seemed that I was doomed to this annual purgatory. Our Spanish mountain farm was a cheap place to live and, with its produce to sustain us, we had few bills or outgoings. But we made hardly any money. There never seemed quite enough to cover the various domestic crises that beset us, like the generator and gas fridge packing up, or a wild boar trashing our new wire fence, or one of Chloë’s beloved flamenco shoes getting ripped to shreds by the dogs. So these Swedish trips were essential.

As I drove on towards Norrskog, I mused, as I had each year before, on alternative ways of making ready cash. I had one new possibility this year, having sent off a few stories I’d written about life on our farm to some publishing friends in London. I wondered what they were making of my handwritten pages —too much about sheep and dogs probably — and allowed myself to daydream (if that’s the right word in a pitch black Swedish afternoon) about a book contract and cheque. Meanwhile I kept a bleary eye open for elk.

Elk are the big danger on Swedish roads. You can’t insure against them because the forests are literally swarming with the creatures. They leap out from the trees straight in front of your car — just a couple of seconds’ warning and there they are. If you’re unlucky, you knock the legs out from under them — a big elk is like a giant horse with antlers — and they come hurtling across the bonnet, through the windscreen and into the cabin with you.

This intimacy is invariably fatal on both sides. For the elk, because it’s been hit by a ton of speeding ironwork, and for you because you’re pinned to your seat by your belt with an elk thrashing out its death throes in your lap. If you’ve really got your foot down, they can take the whole top of the car off, along with the top of the occupants. The Swedes do all they can to mitigate this unpleasantness, erecting tall fences along motorways and elk flashers to pick up the lights of cars and flash their warnings into the forest. But there are still hundreds of accidents every year.

I have an elk-avoidance trick that has long stood me in good stead. You find a big truck that’s going about the same speed as you and you hang upon its tail. Of course you are constantly sprayed by all the muck kicked up by its back wheels, and if the trucker brakes hard and you happen not to notice, then you’ve all the inconvenience of a massive truck bursting through your windscreen instead of an elk. Still, on balance it’s more restful than the strain of constantly scanning the dark band between forest and road for any signs of movement.

It was the prospect of an elk encounter that had led me to choose Weekie’s Volvo. Piqued by Japanese competition in the car market, Volvo once ran an advert on billboards throughout Sweden. It showed a Japanese car full of very surprised Japanese and, standing before them, looming over the car, a vast bull elk. The text read ‘Buy Volvo — there are no elk in Japan.’

The first town to break the endless vista of forest and dark was Norrköping (pronounced Cnaw-sherping). I stopped there to eat a dish of microwaved meatballs and to phone the first farm on my itinerary. This occupied a small island three hundred miles to the north.

‘The sea is frozen over, the farmer told me on the phone. ‘You can drive across to us if you don’t come too close in to the shore. The ice is a bit thin by the reeds. I’ll hang a red bucket in the birch tree by the track, so you’ll know where to turn off?

‘Of course,’ I said, not really absorbing the information.

As I urged the old car on out into the huge darkness beyond the streetlights of the town, the night folded over me like the sea. The heater whirred away to itself, filling the cabin with a warm fug, and for a couple of hours the engine ran smoothly. I was lulled and warm and tired. Then, just as I was wriggling around to get myself comfortable in the seat, the engine cut out. It juddered, then fired and started again, then coughed and stopped. My blood turned cold and my arms and legs went weak.

I got out. Snow was falling now, fast and thick, damping down the already heavy silence. It was so perfectly quiet I could hear my blood squeezing through the capillaries. I heard my heart thumping rhythmically and sensed the infinitesimal humming of neurons in my brain.

Break In Two by Summers, MJ
Would-Be Witch by Kimberly Frost
Encounter at Farpoint by David Gerrold
The Book Club Murders by Leslie Nagel
All's Fair in Love and Seduction by Beverley Kendall
A Strange Stirring: The Feminine Mystique and American Women at the Dawn of the 1960s by Stephanie Coontz
That Girl's the One I Love by Alana Lorens
How to Read a Paper: The Basics of Evidence-Based Medicine by Trisha Greenhalgh
Land of Dreams by James P. Blaylock
Keeping It Real by Justina Robson