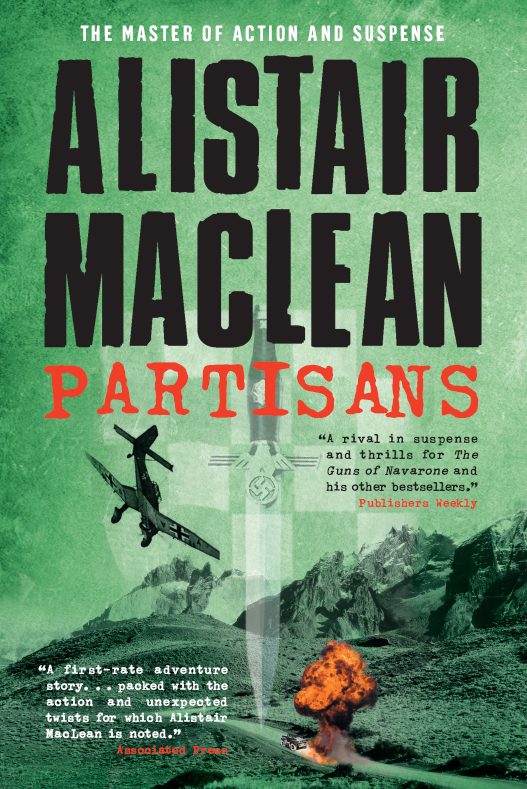 Alistair MacLean, the son of a Scots minister, was born in 1922 and brought up in the Scottish Highlands. In 1941 at the age of eighteen he joined the Royal Navy; two-and-a-half years spent aboard a cruiser was later to give him the background for HMS
Ulysses
, his first novel, the outstanding documentary novel on the war at sea. After the war, he gained an English Honours degree at Glasgow University, and became a school master. In 1983 he was awarded a D.Litt from the same university.

He is now recognized as one of the outstanding popular writers of the 20th century. By the early 1970s he was one of the top 10 bestselling authors in the world, and the biggest-selling Briton. He wrote twenty-nine worldwide bestsellers that have sold more than 30 million copies, and many of which have been filmed, including
The Guns of Navarone, Where Eagles Dare, Fear is the Key
and
Ice Station Zebra
. Alistair MacLean died in 1987 at his home in Switzerland.

All rights reserved. No part of this publication may be reproduced, stored in a retrieval
system, or transmitted, in any form or by any means, electronic, mechanical, photocopying,
recording, or otherwise, without prior written permission from the publisher.

This novel is entirely a work of fiction. The names, characters and incidents
portrayed in it are the work of the author's imagination. Any resemblance to
actual persons, living or dead, events or localities is entirely coincidental.

To Avdo and Inge

The chill night wind off the Tiber was from the north and carried with it the smell of snow from the distant Apennines. The sky was clear and full of stars and there was light enough to see the swirling of the dust-devils in the darkened streets and the paper, cardboard and assorted detritus that blew about every which way. The darkened, filthy streets were not the result of the electrical and sanitation departments of the Eternal City, as was their peacetime wont, staging one of their interminable strikes, for this was not peacetime: events in the Mediterranean theatre had reached a delicate stage where Rome no longer cared to advertise its whereabouts by switching on the street lights: the sanitation department, for the most part, was some way off to the south fighting a war it didn't particularly care about.

Petersen stopped outside a shop doorway â the nature of its business was impossible to tell for the windows were neatly masked in regulation blackout paper â and glanced up and down the Via Bergola. It appeared to be deserted as were most streets in the city at that time of night. He produced a hooded torch and a large bunch of peculiarly shaped keys and let himself in with a speed, ease and dexterity which spoke well for whoever had trained him in such matters. He took up position behind the opened door, removed the hood from the torch, pocketed the keys, replaced them with a silenced Mauser and waited.

He had to wait for almost two minutes, which, in the circumstances, can be a very long time, but Petersen didn't seem to mind. Two stealthy footsteps, then there appeared beyond the edge of the door the dimly seen silhouette of a man whose only identifiable features were a peaked cap and a hand clasping a gun in so purposeful a grip that even in the half-light the faint sheen of the knuckles could be seen.

The figure took two further stealthy steps into the shop then halted abruptly as the torch clicked on and the silencer of the Mauser rammed none too gently into the base of his neck.

âDrop that gun. Clasp your hands behind your neck, take three steps forward and don't turn round.'

The intruder did as told. Petersen closed the shop door, located the light switch and clicked it on. They appeared to be in what was, or should have been, a jeweller's shop, for the owner, a man with little faith in the occupying forces, his fellow-countrymen or both, had prudently and totally cleared all his display cabinets.

âNow you can turn round,' Petersen said.

The man turned. The set expression on the youthful face was tough and truculent, but he couldn't do much about his eyes or the apprehension reflected in them.

âI will shoot you,' Petersen said conversationally, âif you are carrying another gun and don't tell me.'

âI have no other gun.'

âGive me your papers.' The youngster compressed his lips, said nothing and made no move. Petersen sighed.

âSurely you recognize a silencer? I can just as easily take the papers off your body. Nobody will know a thing. What's more to the point, neither will you.'

The youngster reached inside his tunic and handed over a wallet. Petersen flicked it open.

âHans Wintermann,' he read. âBorn August 24, 1924. Just nineteen.
And
a lieutenant. You must be a bright young man.' Petersen folded and pocketed the wallet. âYou've been following me around tonight. And most of yesterday. And the evening before that. I find such persistence tedious, especially when it's so obvious. Why do you follow me?'

Petersen waved him to silence. âSpare me. Well, I'm left with no option.'

âYou're going to shoot me?' The truculence had left the youngster's face.

The Hotel Splendide was anything but: but its dingy anonymity suited Petersen well enough. Peering through the cracked and stained glass of the front door he noted, with mild surprise, that the concierge, fat, unshaven and well stricken in years, was, for once, not asleep or, at least, wide enough awake to be able to tilt a bottle to his head. Petersen circled to the rear of the hotel, climbed the fire escape, let himself in to the third-floor passage, moved along this, turned into a left-hand corridor and let himself into his room with a skeleton key. He quickly checked cupboards and drawers, seemed satisfied, shrugged into a heavy coat, left and took up position on the fire escape. Despite the added protection of the coat his exposed position was considerably colder than it had been in the comparative shelter of the streets below and he hoped he would not have to wait too long.

The wait was even shorter than he had expected. Less than five minutes had passed when a German officer strode briskly along the corridor, turned left, knocked on a door, knocked again, this time peremptorily, rattled the handle then reappeared, frowning heavily. There came the creaking and clanking of the ancient elevator, a silence, more creaking and clanking, then the officer again hove into sight this time with the concierge, who had a key in his hand.

When ten minutes had passed with no sign of either man Petersen went inside, eased his way along the passage and peered round the corner to his left. Halfway along the corridor stood the concierge, obviously on guard. Just as obviously, he was an experienced campaigner prepared for any contingency for, as Petersen watched, he produced a hip flask from his pocket and was still savouring the contents, his eyes closed in bliss, when Petersen clapped him heartily on the shoulder.

The concierge coughed, choked, spluttered and tried to speak but his larynx wasn't having any of it. Petersen looked past him and through the doorway.

âAnd good evening to you, Colonel Lunz. Everything is in order, I trust?'

âAh, good evening.' Lunz was almost a look-alike for Petersen himself, medium height, broad shoulders, aquiline features, grey eyes and thin black hair: an older version, admittedly, but nevertheless the resemblance was startling. He didn't seem in any way put out. âI've just this moment arrived and â'

âAh, ah, Colonel.' Petersen wagged a finger. âOfficers, whatever their nationality, are officers and gentlemen the world over. Gentlemen don't tell lies. You've been here for exactly eleven minutes. I've timed you.' He turned to the still red-faced and gasping concierge who was making valiant efforts to communicate with them and clapped him encouragingly on the back. âYou were trying to say something?'

âYou were out.' The convulsions were easing. âI mean, you were in, but I saw you go out. Eleven minutes, you said? I didn't see â I mean, your key â'

âYou were drunk at the time,' Petersen said kindly. He bent, sniffed and wrinkled his nose. âYou still are. Be off. Send us a bottle of brandy. Not that tearful rot-gut you drink: the French cognac you keep for the Gestapo. And two glasses â
clean
glasses.' He turned to Lunz. âYou will, of course, join me, my dear Colonel?'

âNaturally.' The Colonel was a hard man to knock off balance. He watched Petersen calmly as he took off his coat and threw it on the bed, lifted an eyebrow and said: âA sudden chill snap outside, yes?'

âRome? January? No time to take chances with one's health. It's no joke hanging about those fire escapes, I can tell you.'

âSo that's where you were. I should have exercised more care, perhaps.'

âNo perhaps about your choice of lookout.'

âTrue.' The Colonel brought out a briar pipe and began to fill it. âI hadn't much choice.'

âYou sadden me, Colonel, you really do. You obtain my key, which is illegal. You post a guard so that you won't be discovered breaking the law yet again. You ransack my belongings â'

âCarefully examine. I don't know what kind of incriminating evidence you were expecting to find.'

âNone, really. You don't strike me as the kind of man who would leave â'

Child of Vengeance by David Kirk
Bear With Me: Bear Shifter Paranormal Romance by Zoe Chant
Benjamin Franklin's Bastard by Sally Cabot
Landon: Justice Series ― Erotica Paranormal Romance by Kathi S. Barton
The Third Day by David Epperson
This is a Love Story by Thompson, Jessica
The Act of Marriage: The Beauty of Sexual Love by Tim Lahaye
New Yorkers by Hortense Calisher
Seduced by a Rogue by Amanda Scott
The First Time is the Hardest: An Austin Brothers Novella (Austin Brothers Series Book 1) by L A Cotton