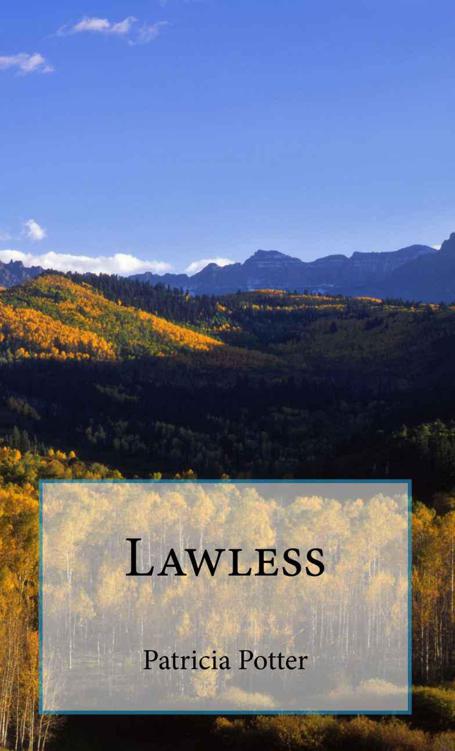 All of the characters in this book are fictitious, and any resemblance to actual persons, living or dead, is purely coincidental.

To Beth de Guzman,
whose enthusiasm and support
contributed so much to
Lawless
and meant so much to me

The gunfighter stared at his would-be employer with as close to outrage as his unemotional nature permitted.

“You brought me here to frighten a woman?” The words were said quietly, but the speaker’s anger was evident in the twitching of a muscle in his cheek. His voice was low, as deep and ominous as distant thunder, and his glittering eyes never blinked.

They were the strangest, coldest eyes Alex Newton had ever seen, and he uncharacteristically fidgeted in his wheelchair. He wondered if he’d made a very bad mistake in sending for the gunman named Lobo. He sought frantically to pacify the man who, by his very presence, dominated the richly furnished room which was Alex’s sanctuary. “She isn’t alone. There’s also a man who helps her—”

Lean and predatory, Lobo had begun pacing Alex’s study like the restless wolf for which he was named. But at Newton’s words, he turned abruptly. “Tell me about the woman,” Lobo interrupted.

Alex stifled his conscience. He would do anything to destroy his hated enemy, Gar Morrow. Anything. “An old man left her his ranch after she visited him a number of evenings. By rights it should be mine.”

The gunman’s eyes narrowed. The man was holding something back. He knew it. He could feel it. Yet, Newton’s explanation satisfied him. He had never held women in very high esteem. He had found their capacity for cruelty greater than that of a man. He would never forget the old Apache woman to whom he had been given as a slave when he was little more than a tad. He would never forget wakening in the cold to her kicks in his ribs, or to the rope pulling around his neck. When he wasn’t fast enough, she would tug it until he choked, and then she and the other women would laugh as he struggled for breath, his hands frantically trying to free himself. Nothing he had experienced since had changed his view of women. They were useful for one thing only.

He had few scruples now. But it irritated him that he had come all this way for such a job. It was insulting. A woman, for chrissakes. His mouth tightened.

“For scaring a woman?” Lobo sneered. “Isn’t that rather high?”

“There’s another factor. The man who stays on her ranch is an ex-sheriff named Thomas.”

For the first time, Lobo’s interest was pricked. He had been ready to walk out, but now he hesitated. The name tugged at his memory.

Lobo continued to fix Newton with an unblinking glare that would give credit to a rattlesnake. “What’s the first name?”

Alex twisted uncomfortably again. He hadn’t expected the guilt he was experiencing. He had been very angry when he had sent for this man. For the tenth time, Willow Taylor had turned down his offer to purchase her run-down ranch, even at several times its worth. But now that he had gone this far…

Lobo interrupted impatiently. “I asked you why he’s at the ranch? Why he’s an ex-lawman? Last time I heard, he was one of the best.”

“I want to know everything. I never do a job blind. That’s why it’s always done right. I know Thomas’s reputation in New Mexico. It was a damned good one.”

“He’s a drunk now,” Alex said reluctantly. He was committed to action, but that didn’t mean he wanted to have this man in his house one second longer than necessary. He remembered all the stories about the renegade killer, that he was a white man who had fought with Apaches against his own kind, that he was a gunman without pity or scruples. He shivered inside again, fighting to keep his fear from showing. Alex Newton had always considered himself a strong man, brave and self-reliant until a bullet had doomed him to a wheelchair, had made him helpless. He hated his feeling of impotence, particularly in the presence of this dangerous, powerful animal. Lobo. The name fit.

“Since when?” Lobo’s question shattered Alex’s thought, and it took him a moment to realize the gunman was still asking about Brady Thomas.

Alex looked at the lean gunman with anger. It was as if
he
were being interviewed, not the other way around.

“Why?” The gunman’s voice was like a pistol shot.

Alex shrugged, hoping to display an indifference he didn’t feel. “I’ve just heard rumors about it. He stops for a while, then starts again. Town fired him. He puts up at Willow’s ranch.”

“Tell me more about the woman.”

“I just want you to frighten her.”

But his interest was caught now, and he knew it showed from the feral look in Alex’s eyes.

“I won’t do anything illegal,” Lobo warned. “I won’t go to jail for you. I always stay within the law.” He didn’t add he was often able to twist the law to his own use.

“I just want you to scare her off,” Alex reiterated.

“Your reputation,” Alex said frankly. “I’m hoping your name in itself will frighten her into selling. She has no right to the ranch anyway. She’d be better off without it. A woman can’t run a spread by herself. And I’ve offered her several times its worth.”

“Probably thinks she can get more,” Newton said, once more holding his tattered conscience in check. “Another…rancher wants it too. But I ain’t going higher, and the other man can’t afford more.”

Lobo uttered a brief oath. Damn the man. Still he was already there, and it sounded simple enóugh. He had nothing else at the moment, and the woman was apparently unscrupulous herself, taking advantage of a dying man.

“And what if they don’t scare?”

Alex was confident they would, even stubborn Willow Taylor. He did not consider himself a coward, yet looking at Lobo’s hard eyes, he felt himself tremble.

“Then two thousand for your trouble, no questions asked.” It was a bad bargain. Alex knew it. But he wanted Willow gone and this man was the most likely one to drive her away.

“In advance.” The gunman’s voice was curt.

Alex wheeled his chair over to the safe in the corner. After he opened the door, he carefully counted out a stack of bills and gave them to Lobo.

“You can stay in the bunkhouse,” Alex said uncomfortably, hoping the man would refuse. He had a daughter. Thank God, she was away from the ranch at the moment. Marisa enjoyed danger, and this man radiated it. For a moment he tried to see the gunfighter as a woman would.

Lobo was tall and lean but well-muscled. A hank of sandy hair fell over a high forehead, emphasizing striking glacial eyes that were a light blue-green color. The nose was straight and well-proportioned, and the chin willful. Some might call him handsome, Alex supposed, despite the intimidating coldness in that face. There was no sign of Indian blood in him, although Alex had heard that he had lived with Apaches for a number of years. Alex had seen captured Indians who were hostile, and was familiar with the impassive expression they showed to the world. Lobo bore the same hostile indifference and arrogance. It was obvious he didn’t give a damn what Alex, or anyone else, thought.

Lobo watched Newton’s appraisal with amusement, then glanced around the large, gracious room with contempt. “No,” he said. “I’ll camp someplace on the ranch.”

Lobo gave him a curt nod and disappeared out the door, leaving a measure of tension and violence hovering in the room.

The whole town was buzzing about The Gunfighter.

Willow George Taylor had heard nothing else all day, and now she looked up into the worried eyes of her friend, Dr. Sullivan Barkley.

“Not just any gunfighter,” Sullivan said. “One of the worst of the breed. A man named Lobo.”

Willow had heard of him, of course. Who hadn’t? She had a classroom full of children, and the boys talked frequently of gunfighters and famous lawmen and shootouts.

And no one ever quite knew what to do about Willow.

From the first moment she had stepped off the stagecoach and pronounced herself the George Taylor the town had hired to be its teacher, she had been like an earthquake, shaking the foundations of the ranching and farming community whose only excitement until then had been the ongoing feud between Alex Newton and Gar Morrow, onetime friends and cofounders of the Colorado town.

The problem now, Sullivan thought ruefully as he looked into Willow’s blue eyes, was that Willow didn’t take the new threat seriously, not after all the other crises she’d weathered.

“You must take care,” he warned her as his gaze traveled around the schoolgrounds. He had hurried over from his office to catch her at the end of the day. He’d discovered she’d already heard the news, but the impact appeared slight. There was perhaps the slightest tremor on her lips, but it had disappeared quickly as she announced her intention to return home with the twins.

Sullivan shook his head. Jimmy and Jeremy were little protection, though the Lord knew they cared enough and would try to keep her from harm. All of Willow’s little band of orphans and misfits would, but none were a match for a man of Lobo’s reputation. A drunken ex-sheriff who acted as a ranch hand when he was sober; Estelle, a retired soiled dove who was afraid of her shadow; Chad, a thirteen-year-old boy who’d seen more bad times than most people in a lifetime; eight-year-old twins, and tiny Sallie Sue—they could do nothing against a killer like Lobo.